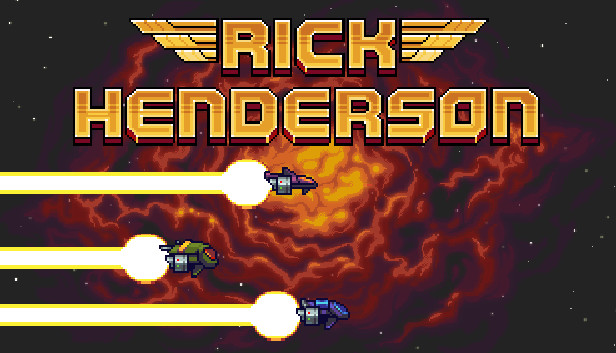 For Rick Henderson players, if you are a beginner to this game, this is a small guide to help you understand the basic mechanics better.

Good for beginners, things start out a bit slow.

Same as hard endless mode instead it’s like starting on loop 4, everything is very fast and unforgiving.

You fight only bosses in a succession from 1-5. Goal is to eliminate them as fast as possible. There are sixty boss combinations and they change each six days.

Game is made out of loops and levels

One loop consists of five levels with each containing a boss in one of three variations. At the end of each level when you kill the boss, you get to pick from 4 out of 20 random perks to upgrade your ship.

You are attacked only by Pirates.

You are attacked by Pirates and Rift Miners.

You are attacked by Pirates, Rift Miners and Terrans.

You are attacked by Pirates, Rift Miners, Terrans and Paragons.

You are attacked by Pirates, Rift Miners, Terrans, Paragons and Sundyne.

From Loop 2, all enemy factions are attacking you with some additional stuff.

Planned: Shields turn on after being destroyed (with a small cooldown of course).

Middle grounds ship with a speed of 1.0 and 10 points of health. Special ability is Hologram which draws away TARGETED enemy bullets. Use hologram when encountering a large group of enemies that use targeted or homing bullets (Provokers, Asteroid Cannons and similar). Hologram also attracts some of the enemies that home into you like Drillers and Avengers.

Light ship with a speed of 1.1 and 9 points of health. Special ability is Microwarp which quickly moves you from place to place. It does not teleport you though bullets can’t hit you nor you can hit enemies while warping. Great to get out of tough situations with lots of bullets. While warping, the graze counter is deactivated so you can’t use it to fill up the graze meter easily.

Heavy ship with a speed of 0.9 and 11 point of health. Special ability is Artillery Strike which launches 20 missiles from left to right.

They have no damage modifier to shields or heavy enemies and most of them have some sort of drawback (usually recoil).

They deal double damage to shields, half of damage to armored enemies, and regular damage to normal armor enemies.

They deal half damage to shields, double damage to armored enemies, and regular damage to normal armor enemies.

Additional indicator will be added, but all the big enemies are armored (including bosses).

There is total of 6 rank color to pickup throughout the game:

When you fill the Rank bar with all six colours, you get a promotion after defeating the next boss. Most of the enemies and all bosses drop ranks for you to pickup. When you end your run, your score gets multiplied by your attained rank to get the final score.

Ranks you can attain are following:

Picking up ranks also get you a small amount of points.

That’s all we are sharing today in Rick Henderson Beginners Guide, if you have anything to addm please feel free to leave a comment below, and we’ll see you soon.