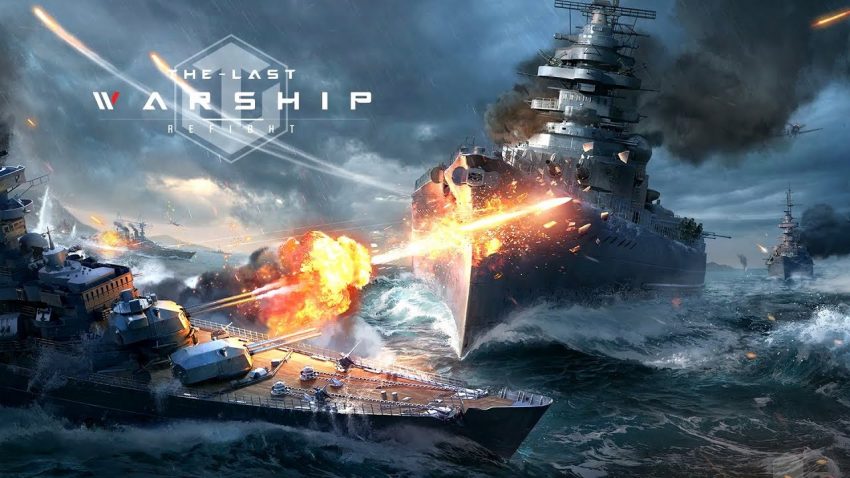 Here’s how to play the game. If you’ve played World of Warships before, this will feel very familiar, perhaps a bit too familiar, but still fun.

So, the first thing you see when you enter the “port”. 3 ship classes, what do they do, why should you use one over the other?

– Has access to the biggest, hardest-hitting guns, but they turn and reload slowly.
– Has a large health pool

– Slow, and takes a long time to turn, difficult to dodge shots and torpedoes

– Has the least torpedoes

– Has access to a variety of medium sized guns, from fast turning, fast reloading, great anti-Destroyer and fire setting guns, to heavier guns like a battleship, with medium reload and slow turning, great at anti-cruiser role.

– Armor is enough to bounce even battleship AP when angled

– Has 2x torpedo launcher slots per side

– Much more maneuverable than a battleship, but still worse than a destroyer.

– When broadside, Battleship or other cruiser AP can be extremely deadly.

– Equipped with 2 center-mounted torpedo tubes, best ones have 12km range in a quadruple (IIRC) configuration

– Guns are quite weak against non-destroyers, unless they set a fire.

This won’t be a very long section. Quite simply, the game mirrors World of Warships a lot, so effective tactics and styles in WoWs are the same here – angling your armor works, you should use HE against angled targets, ramming can kill a target or cause flooding, controls are exactly the same, etc. Only real difference is that the combat ranges are generally very close and brawl-y, and battleship AP can be bounced by cruisers more often.

So, on to the actual game.

The game works like a standard Battle Royal. Instead of dropping from a bus, you instead choose a spawn area from the map. Note the color guide – you want to drop inside the circles with the high value loot, or at least nearby. Getting equipment as soon as possible will dramatically alter your game. 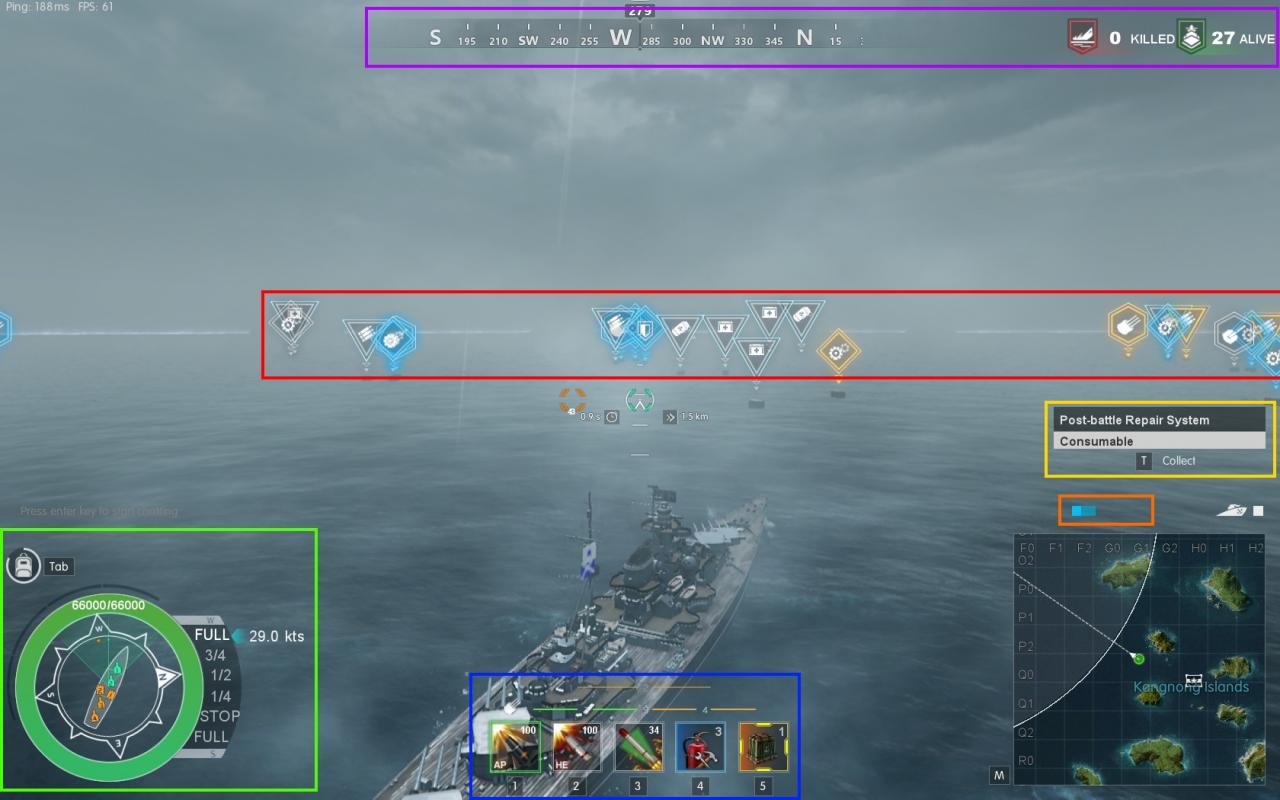 In Red, we can see ship consumables. I’ll get to the various consumables, what they mean, and
their usages later.

In yellow, it indicates the nearest available pickup.

In green, you have the ship overview – your inventory, how full it is, your speed and current engine setting, your hit points, and inside the compass, a model of the ship, its turrets, torpedoes, and their status.

Orange = loaded, but not on target

In Orange, we have time till the safe zone (blue circle) shrinks to the new safe zone (white circle)

Inventory, upgrades, and you.

Inventory and upgrades are critical to your success here. Grab them quick and early, or face certain death. 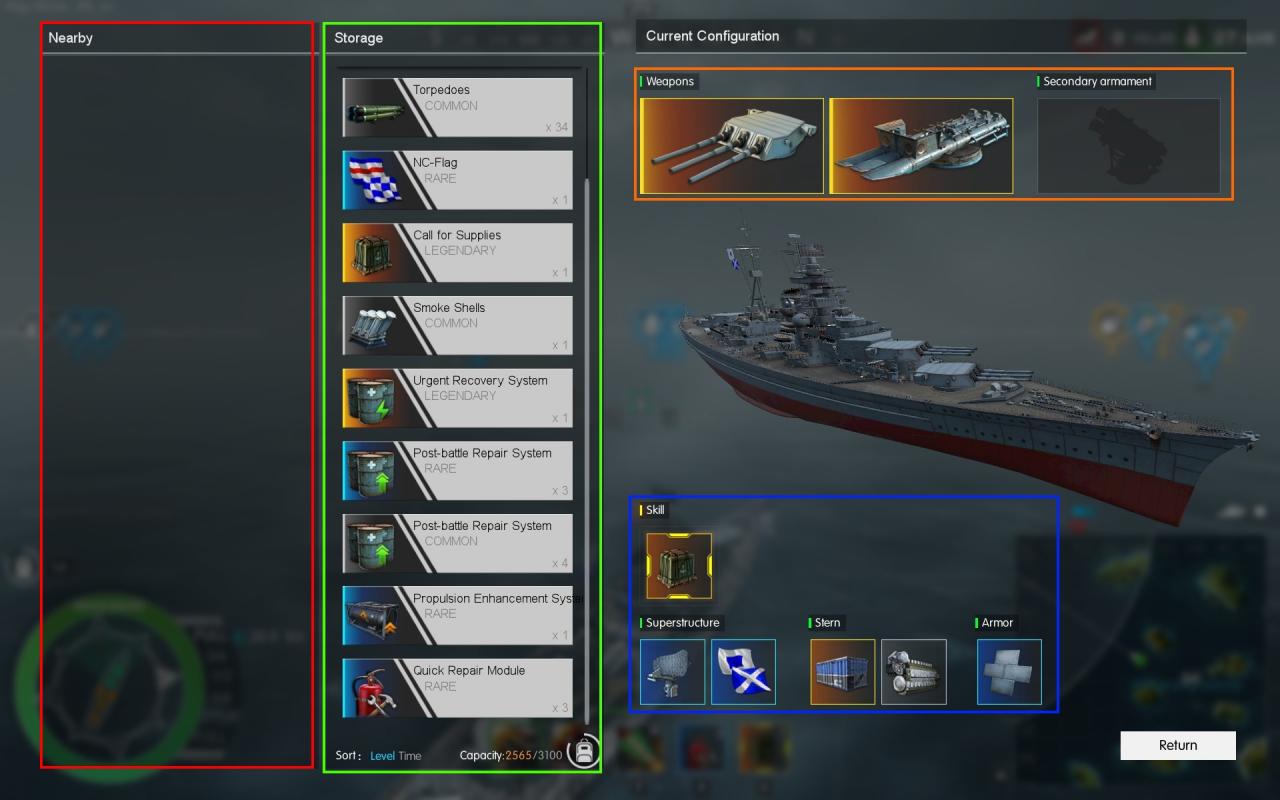 In Red, we have the nearby equipment we can pickup. IMPORTANT: Click and drag upgrades here to throw them into the sea – ideal to manage your storage space!

In Green, we have your inventory, along with how full your inventory is at the bottom. If you’re over-capacity, your ship goes half speed. I’ll get into what all the stuff means in the next section

In orange, we have your ships armament. Drag, or right click an upgrade in inventory to replace it. You have three weapons, main guns, torpedoes, and secondary guns, which fire automatically.

In blue, we have ships systems. From left to right:

Skills: Currently you can place the request air drop here.

Superstructure: Two slots here. The first is for radar, which extends torpedo range, increases enemy ship detection range, and ensures better dispersion at close range. The second is for flags, which can do a variety of things, from increasing reload speed, decreasing consumable cooldown, increasing heal power, and increasing turret traverse speed.

Stern: Two slots here. The first is for storage upgrades, which allows you to carry more in inventory. The second is for propulsion upgrades, which increases ships speed and rudder speed.

A note on the inventory: The “4” slot will automatically be assigned to either urgent recovery systems, post-battle repair systems, or quick repair module. If you want to use one of these and its not in the 4 slot, go to inventory and right click the consumable.

Upgrades & Consumables, what do they do?

So, there’s a lot of icons out here. What does it all mean?

First note: Upgrades are not class-specific. When a destroyer dies, a battleship can loot it and transform their guns into battleship guns.

– Main gun with 3 barrels: Upgrade for your main guns, or torpedoes.

– 3 rockets/shells: Ammo for your weapons. Grey is light ammo (used in normal & rare main guns), or torpedoes (used in torp launchers), Yellow is heavy ammo – used in legendary main guns. Secondary guns do not use ammo.

– Canister with radioactive (?) symbol: gives smoke shells. When used, generates a smoke screen which hides the ship. Firing while in smoke will not reduce detection.

– Two gears: ship systems, may be radar, storage, flags (I think), or propuslion

Also on map/minimap: Flag with star is an air drop. More on that later.

Now, what do all these upgrades do?

Main battery upgrades: In general, the higher rarity is better, but look at the stats and test em out, decide what you think of them. Main guns can sometimes have a choise between big, heavy hitting, but slow reloading guns, or smaller, but fast reloading and fast turning and great at setting fire guns.

Secondary battery upgrades: Looks nice when you get close to a ship. Not exceptionally effective. Only available on cruiser and battleship.

Post-battle repair systems can repair 25% (normal) or 50% (rare) of your HP over time, but only if you take no damage. You cannot use these while on fire or flooding (it will be consumed, but have no effect, beware.), and if you are shot at mid-way through healing, it will stop. A critical heal to repair fully between battles.

The third type is urgent recovery system (legendary) – these instantly repair 50% of your HP, no matter what. They have a very long cooldown (around 90s), however.

The second is for flags, which can do a variety of things, from increasing reload speed, decreasing consumable cooldown, increasing heal power, and increasing turret traverse speed.

There’s also the propulsion enhancement system, which will temporarily boost your speed and rudder for a time.

Wrench: Gives an instant repair, which can be used to instantly put out a fire, flood, or repair the ships weapons, steering, or engine. 60s cooldown.

Air supply: Request an air drop. Visible to all players, use it and you can put it where you want on the map, it will take a minute or two to arrive, so expect company. Contains legendary loot, usually a main battery upgrade, some heavy ammo, and an urgent recovery system.

Thank you for reading. I hope it helps improve your battle so that you can have more games like this: 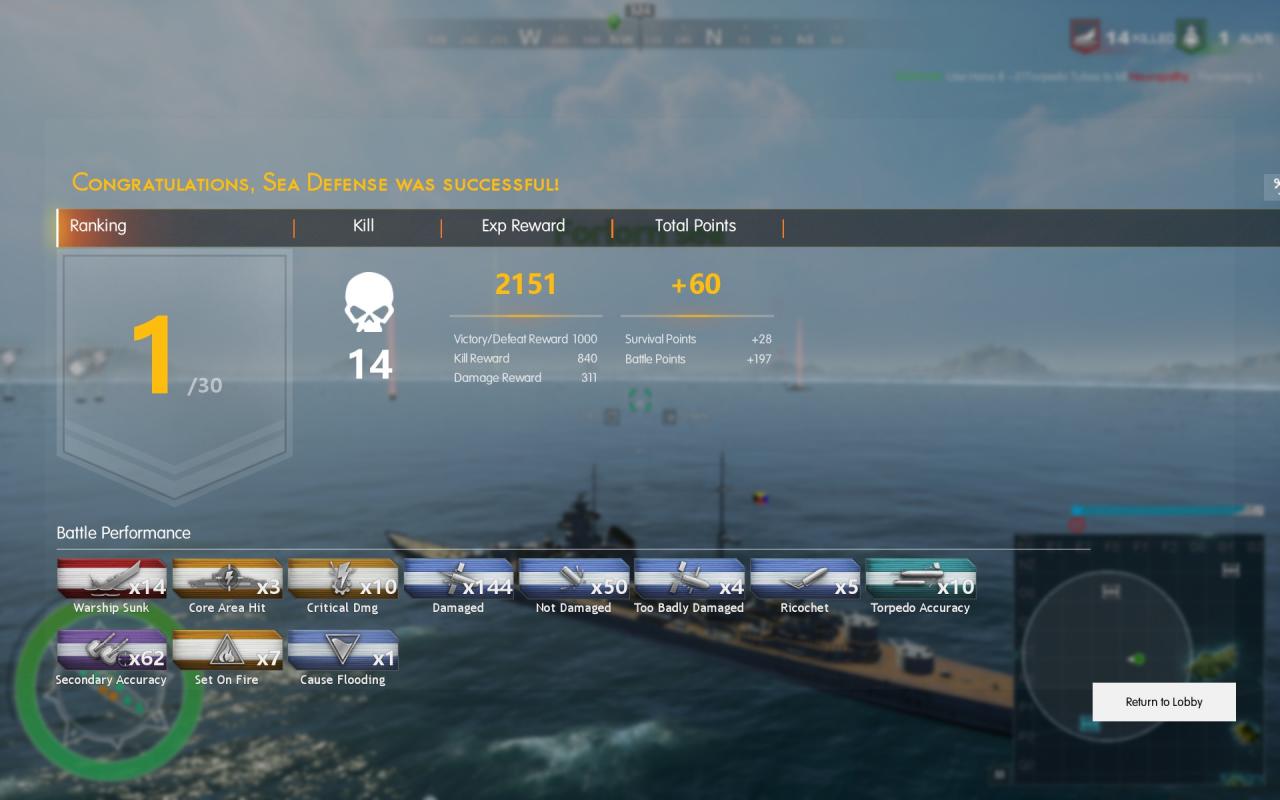 Written by The Destroyer