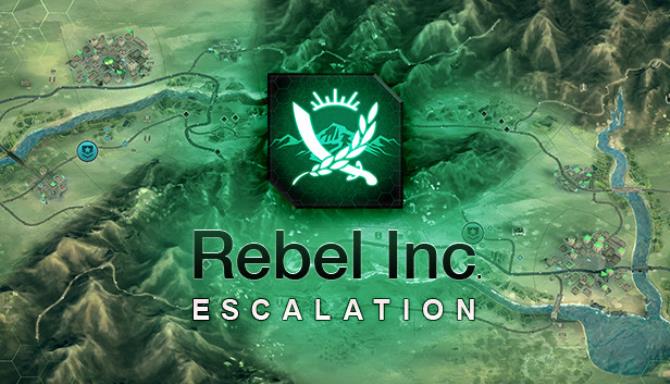 Hi there! I’ll show you to the School of Agriculture for RI (the others are Telecomms and Justice) the friendly way. I’ll also show you how to deal with insurgents with this strategy. It has worked for me, for every governor and every map on brutal. Even for Home By Christmas!

First of all I do not play with Advisors. You may play with advisors if you wish. Pick some middle location, preferably a rural zone. You may allow yourself these exceptions:
Saffron Fields: City in the middle
Mountain Pass: The pass itself (mountain tile with major roads)
Southern Desert – City on the right, by the riverside (bottom bank).
Pistachio Forest: No exceptions. I usually start on the left side of the river.
Distant Steppe: No exceptions. I usually start below the big city.Then, make adjustments if you’re playing with the governors:
Civil Servant: No need for any adjustments! Best Governor! 😀
Economist: Always keep at least 11$ in the bank as emergency money for events.
General: Because of increased civilian costs, all initiatives will be delayed. Insurgents will come before you finish the required initiatives. Keep them at bay, and mix troops and initiatives. After you finish civilian, you can focus on the other two tabs.
Banker: Try to keep at least 10$ or 20$. It will gain you extra money in the long run. Spend all of your money, then print money to increase inflation. Continue buying initiatives like normal after inflation drops down, but forget about those 10$/20$, like they never existed, unless you need emergency money for an event.
Smuggler: You will be delayed a little, but not as much as General, because of increased anti corruption costs.
Warlord: You will have to buy an extra initiative.

Here’s what you should buy, in this order.
District Representatives
Anti Corruption 1
International Assistance (When asked, always pick Funding Only, unless you want to be screwed over by horrible amounts of inflation and corruption)
Services Discussions
School Regeneration
Medical Supplies
Water Supplies
School Supplies
PR & Media Office
Effective Procurement
Development Discussions
Livestock Development
Crop Development OR Agricultural Logistics (if playing with the Warlord, buy both)Insurgents should come soon. This setup will quickly stabilize your first zone, and soon more will come. Unless you’re playing with the General, you should be able to buy all of this before they start spawning. If you have money to spare, buy Regional Census.
Rules that you and the insurgents must abide by.

Before we get to the mid game, where we will be fighting, let’s discuss some rules that insurgents must abide by, and aren’t known by many people.

1.Bases CANNOT spawn in stabilised zones OR a zone with soldiers. If you see a camp spawn in a stabilised zone, it’s not because insurgents somehow broke this rule. They didn’t. The base spawned before the zone was stabilised. Your intel gathering was too slow, and noticed it too late.
2.Bases will spawn insurgents of varying strength, which depends on one factor – number of hostiles and supporters. If the zones are stable, little insurgents will spawn. You want to let your police do work for you, kill the insurgents. Militia will usually kill 1 str insurgent. Standard Police will always kill 1 str insurgent, sometimes 2. Police Specialists will always kill 2 str insurgent, sometimes 3.
3.Bases are more likely to spawn in insurgent-controlled-zones, zones without intel and remote zones. That’s why you should contain the insurgents, not defeat them in the early game, and gather intel in zones where you don’t want them to spawn. The more bases there are on the map,the slower they will spawn. Don’t give insurgents less than 3 zones to live in, unless you stabilised 75% of the map. Don’t give them more than 5, or you’ll bleed from insurgent activity. You want all of them to be remote, or at least mostly. So,if you destroy all bases and there’s still a lot of places where rule 1 is not in effect, you’ll certainly quickly see a new base set up, which will quickly spawn insurgents. But once all zones in insurgent controlled zones are full, they will start spawning somewhere outside.
4.Garrissons always try to spawn next to insurgents, or their zones (you must have intel on target zone). If no such zone exists, they will spawn randomly.
5.Inflation. Do not, and I repeat, do not buy initiatives if your inflation is higher than 15%. Wait for it to go below it.
6.Concerns. Every once in a while look at the region view, look at the concerns. If you see 4 concerns of the same thing, buy 2 of that thing! If you see concern over Water/Sanitation, buy two initiatives of Water/Sanitation Branch. Same goes for all other initiatives. Exceptions are Telecomms and Electricity. Do not buy both, because they are expensive.Buy only both, if 7 zones or more ask for them.
7.Corruption Risk. Never let it go above 50% risk, or 20% downgrade of support. Buy AntiCorruption and/or Purges. Ideally you want to have max 50% risk, or 10% support downgrade.
8.Strength of soldiers.. Depends on a few factors. Base strength (increased by upgrades), number of supporters, terrain type, roads type, road level, whether intel is collected. Insurgent soldiers get bonuses from: having a base in the zone, zone being insurgent controlled, if its controlled, then how many other insurgent controlled zones it is connected to. Insurgent Capability and number of Hostiles increases spawn rates.
9.Soldier Training – do not train more than 2 nationals soldiers, and 2 coaltion soldiers at the same time. Period.
10.Tour of Duty for Coaliton troops is shortened if Coalition troops are directly fighting. Try to put National troops into insurgent controlled zones/next to them, and let Coalition troops support them. A few exceptions: When you don’t have enough nationals to fill the blanks in the border, when you need to defeat a stray group, when you quickly need to make insurgents go away from some zone.

So, you bought all the initiatives listed before. Good.
Now you want to start fighting the insurgents. First of all:
If insurgents spawned in multiple areas of the map (say, top right and top left), you want to eradicate one group, and contain the other one. You’ll use coalition troops for this, mostly, You can buy garrisons to do this. First, identify easy-killzones. Those zones allow you to kill the insurgents with only 3 troops. I marked them on pictures below. There are also medium-killzones, but that’s your homework to do – find out in which zones you can kill the insurgents using 4 troops. Usually you will use Coalition troops for this, during mid game at least. 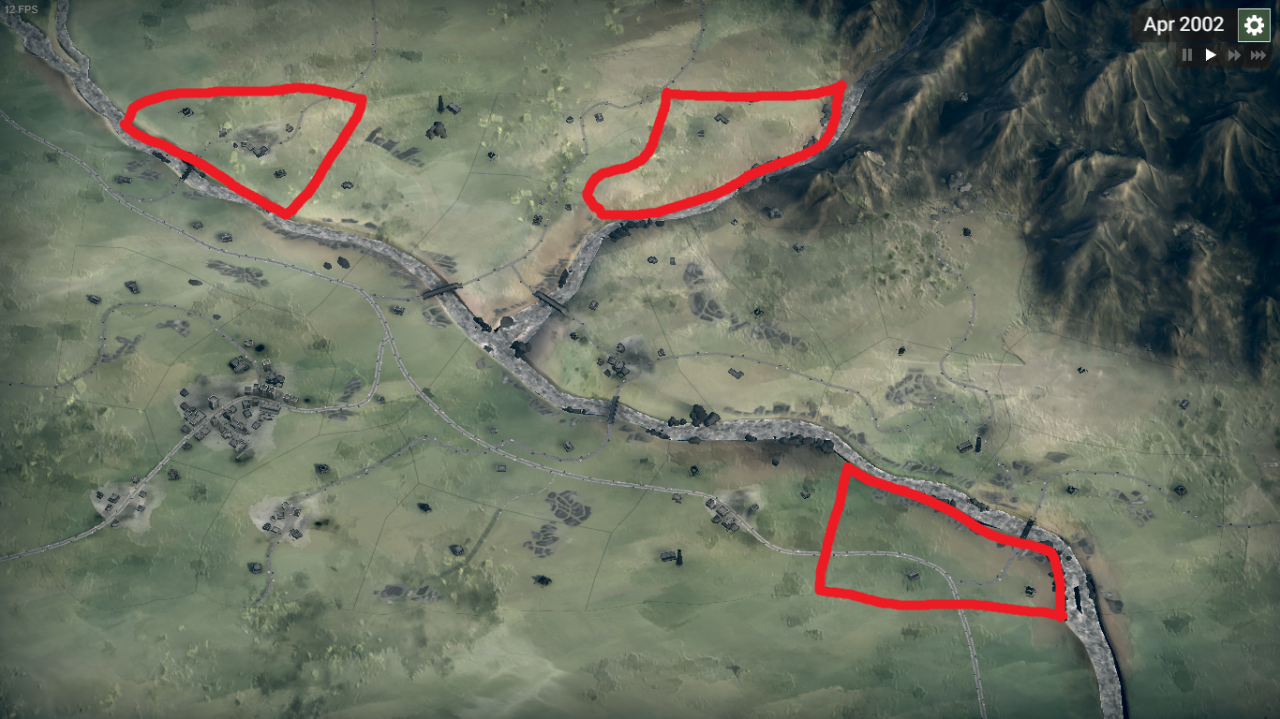 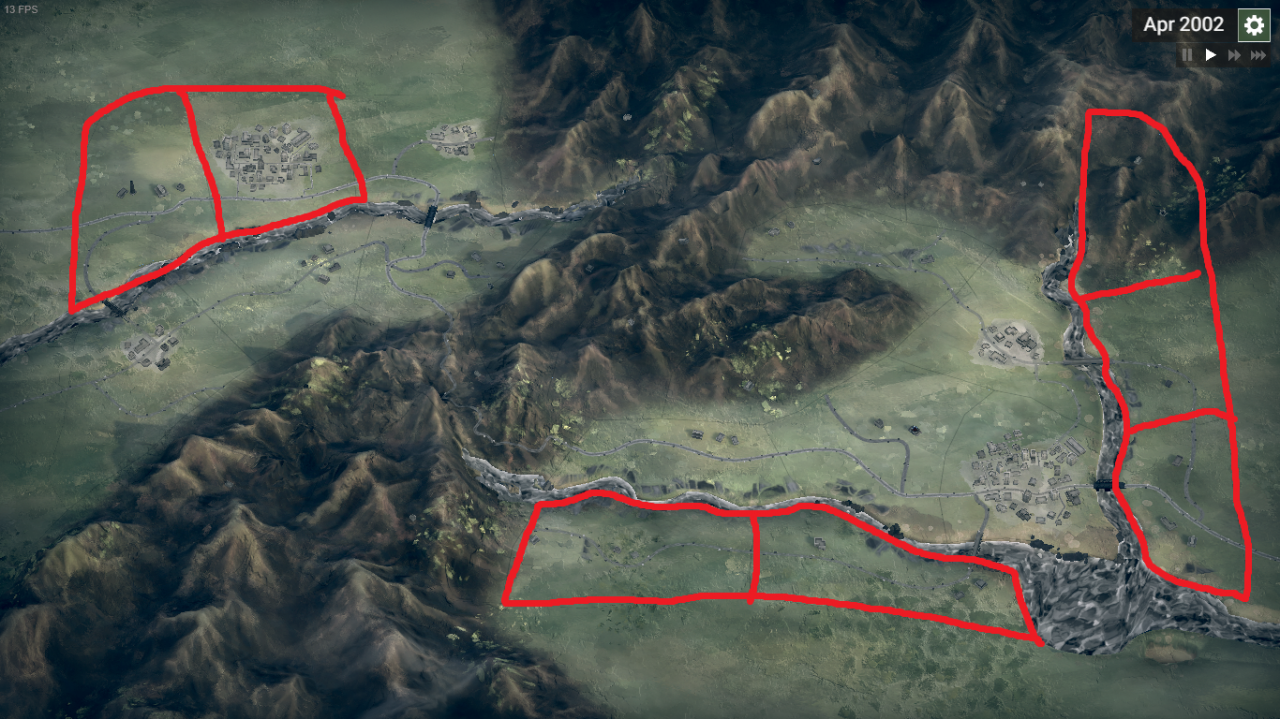 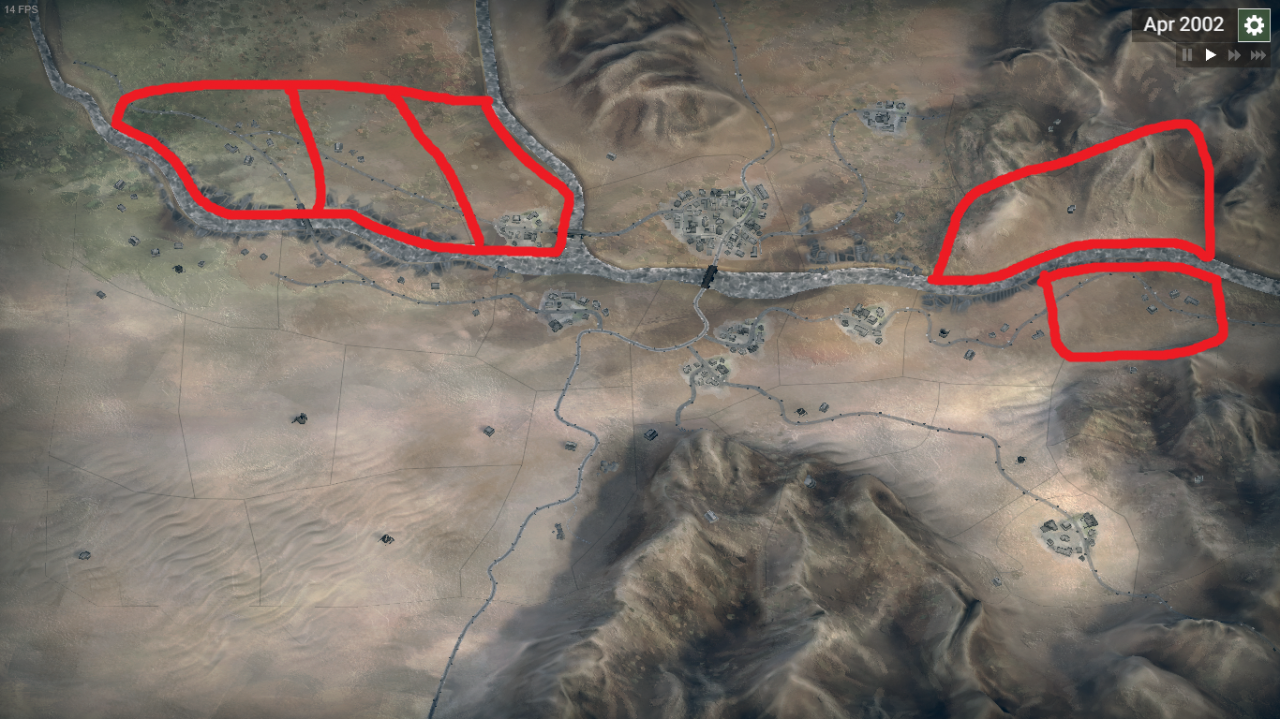 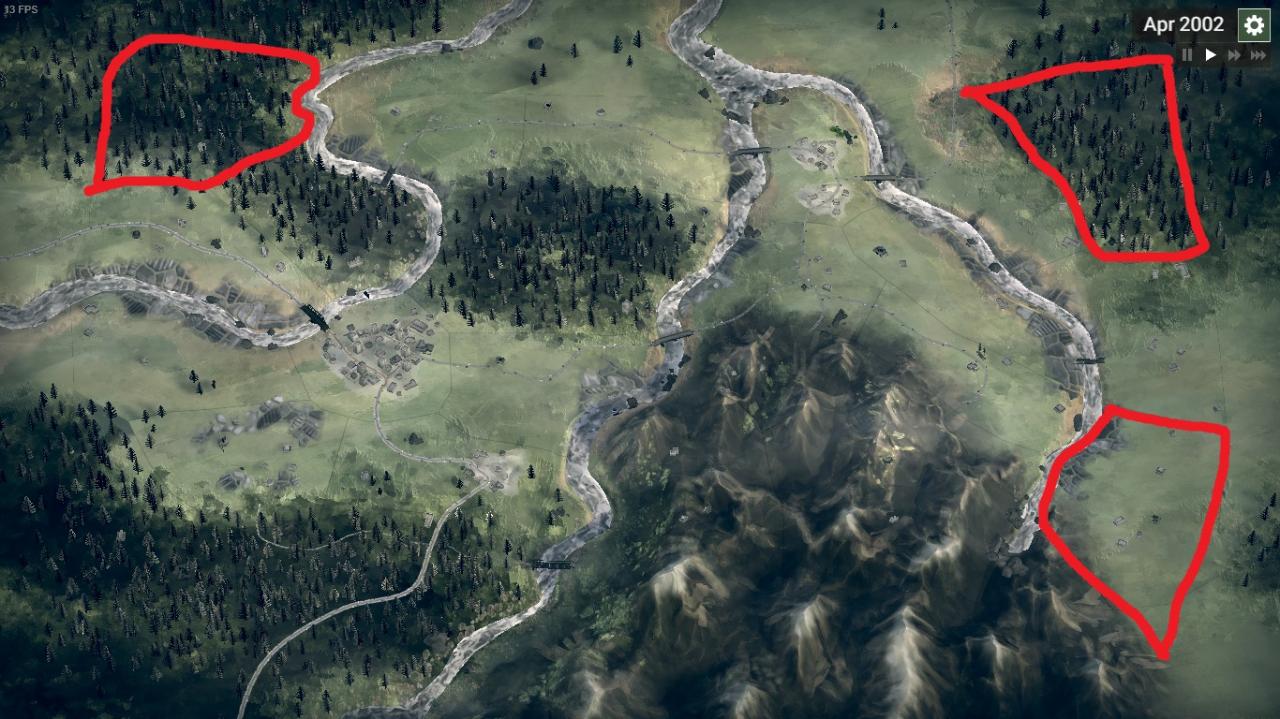 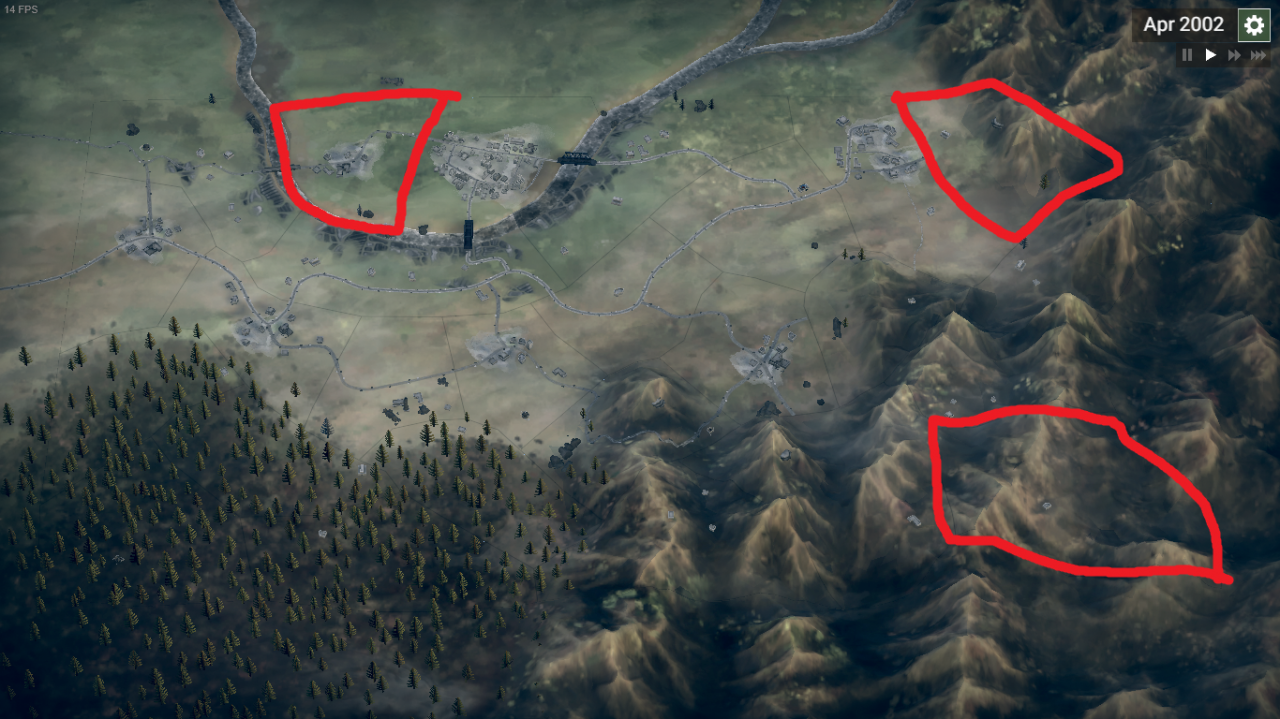 If you have the smuggler, buy Cut Corners.
So, the strategy for midgame is as follows:
If there’s only one group of insurgents – focus on containing them. Focus on National Soldiers and AntiCorruption. You should buy one National Soldier every 10 months or so.
If there’s two groups of insurgents – focus on eradication on one of them, and deal with the other later (unless they take a city, in which case you musn’t let them!). Pump most of your money into Coalition troops, but remember to train up National Troops. You should start training a new National troop one after the previous one is done.What should you remember during mid game:
Buying Anti Corruption
I usually focus on national troops, roads I usually buy later, but of you want, you may focus more on roads. I prefer to use national troops as stationaries for containment and coalition for supporting them or dealing with outside-spawned groups, because they move significantly faster.
Buy Militia Initiative after you stabilized a few zones. It will slow down insurgent takeover speed and kill 1 str insurgents that will spawn outside the containment zone. Remember to deal with the bases using soldiers though.
Your first military upgrade should be National Travel Logistics.
If you’re struggling with kicking back the insurgents back to the containment zone, and don’t have a lot of time, buy airstrikes.
Buy Garrisons when you have contained the insurgents, or are about to. That way the garrison will spawn in a useful place.
Interpreters & Guides are superb Human Terrain System is also good. Intel gets gathered real fast when you buy them. Civil Assistance is also good if you have money to spare.

Keep playing like this, upgrading your soldiers and anti corruption, until you hit late game (75% percent of zones stabilised). Always threaten insurgents when the option arises.

Late Game – The waiting game and maximizing your score

So, a third of the map is stabilised now, right? We now can start to improve our reputation significantly. Purchase Outreach Office, then buy Universal Justice for a few reputation points. Once all of the map, but the insurgent controlled zones (should be at max 4 by now) is stable, attack the insurgents, and destroy them completely. Do not move the soldiers out. They will block bases from spawning. Buy Democratic Transition and rush the elections. You’ll get extra reputation points. You also now can accept peace talks – talk to the insurgents. Always pick the right option – the one that gives you 4 rep. Once you reach the final part of the peace deal – don’t accept it. Demand Concessions, next time Reject Deal. Next time Demand Concessions. Repeat the cycle. If both Reject Deal and Demand Concessions give you 1 rep, start doing Concessions only. Wait until all the zones are stable. You win!
Written by transportowiec96

1 thought on “Rebel Inc: Escalation Guide – How to Win”