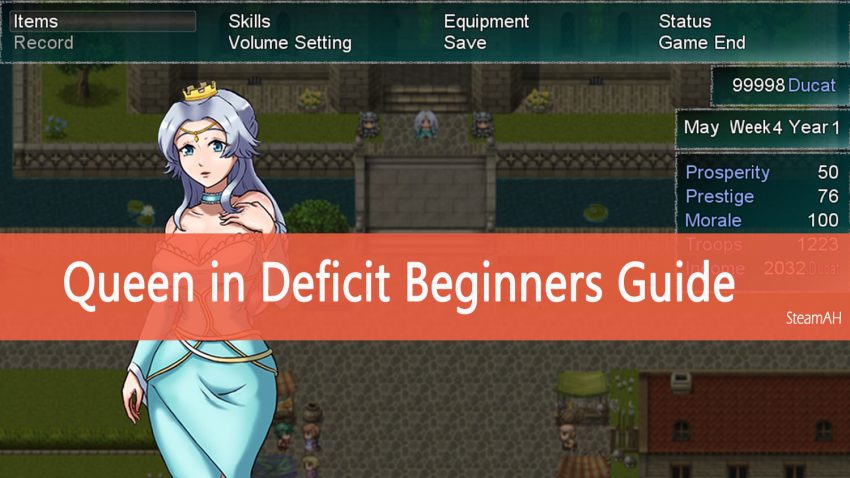 Queen in Deficit is a 2D game developed by BrokenTorpedo, Here’s a guide on how to get started with the game. Since the UI at the moment still isn’t very self-explanatory.

Note: the latest version of the game is 0.20a. and lots of new content has been added in the new patch.

Basic Mechanics
The game’s objective is keep your kingdom standing, expanding if possible, the game will supposedly ends at the end of Year Five if you didn’t get a game over before hand,
but that’s not implanted yet.

And here are a few variables to have in mind:
=Money=
The currency in this world is called Ducat. You will get tax income every 30 days. How much you’ll get, is determined by the Citizen Satisfaction and Prestige, also how many land you own. Minus the spend on feeding your soldiers and other monthly cost, the rest will be what you’ll end up getting.

=SP=
Stamina, almost every action requires some stamina. If you run out of SP, then it’s time to go home and sleep.

=Prosperity=
How well the people is doing under your rule. If the number is low then you might start to see rebellion. And if the number gets TOO LOW, then you are in danger of being overturned, thus getting a game over.

=Prestige=
How much the people and the others respect you. Some events will require a certain level of Prestige to trigger, either high or low.

=Troops and Moral=
Troops is how many soldiers you have under your command. Moral is how much your soldiers are willing to fight. Both would effect the outcome of a battle.

Old save file from previous version
There’s a data file “RX_SaveFileInfos” in the game folder next to your save file, bring it together with it to the new version.