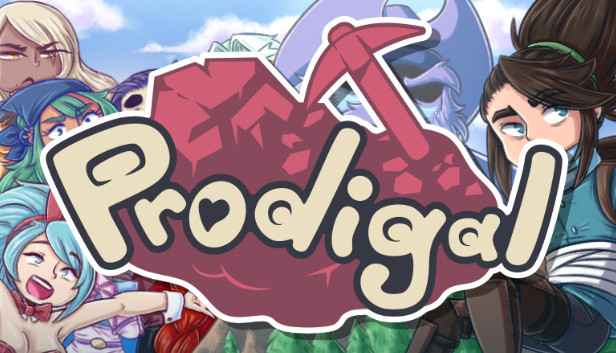 For Prodigal players, this is a guide to help those looking to unlock the ability to run. You must complete the quest: “A Small Favor” and this guide will tell you where to go and in what order.

This guide contains minor spoilers for the game, and is a guide for unlocking the ability to RUN. You get this buy finding an item that you can equipped to allow the player to increase their movement speed and run when they want. (You can still walk after you equipped the item)

The way to unlock this item is by completing the quest: A Small Favor.

A small favor is one of the side quests you can access from the very beginning of the game as soon as you finish the introduction sequence. Once you have arrived home and slept you will wake up on the morning of the first day. Bolivar will ask you to get a pickaxe to help him gather materials. Once this conversation is over you will have full control of where you go.

Some things to know about A Small Favor – Once a small favor is started, every time you move to the next step of the quest chain, the NPC involved in that next step will be locked into their dialogue and actions for the quest. This means certain characters with progressive stories of their own may get locked into the A Small Favor Quest and be unable to progress until their stage of the quest is complete. (Basically once they ask you for something, they will stay in the dialogue of waiting for their request to be completed until it is finished.) This is important if you are trying to get the specific dialogue for a marriage candidate on the first day

Step 1: Begin the quest.
The start of this quest is located in the Crocasino. The Crocasino is located north east of Pa’s house. Head north past the boot shop and head east when you reach the top of the stairs. You are looking for the character Tara, she hangs out inside the Casino. (She should be directly north of the crocodile statue as it is morning.) Speak with her until she asks you to help her out. The Librarian won’t let her look at the birth records for a specific year so she asks you to do it. Agree to help her (YES) and finish the conversation. NOW WE HEAD TO…THE LIBRARY.

Step 2: The Librarian
Head out of the Crocasino and head over to the library. The library is located south of the Boot Shop, north of Lynn’s house and just west of the stairs leading to Pa’s house. Head inside the Library and speak to the Librarian. NOTE: Nora may first tell you the hint of the current stage of the Main Story quest you are on. She will always give you the hint first. Keep talking to her until she talks about the birth records. She will agree to look into if you help her get an overdue book back from Lynn. Agree to help her. (YES) LET’S PLAY A GAME OF WHERE IS LYNN?

Step 3: Lynn the Criminal
Leave the Library. We’re going to look for where Lynn is. If it is the morning she should be at her house. (In the morning she’ll be outside working if it’s clear weather. If it’s raining or snow is on the ground she’ll be inside. Talk to Lynn and she’ll realize she never returned the book. But…she needs a few more minutes to finish it. In the meantime, she’ll ask you to go get her dad’s boots from Tess. Agree to help her (YES). NEXT STOP: The Boot Shop

Step 4: I need to clean some stains…
Head to the boot shop. Tess will be sitting behind the counter. Talk to her. where she claims she just needs help from the Maid to clean some of her coffee mugs. Once she does that she can return Lynn’s boots. Finish her dialogue and head out of the boot shop. IT’S TIME TO GET OUR FANCY ON, AT Ashwood Manor.

Step 5: The Maid and the Small Favor
Head west from the boot shop, passing the church and arriving next to the fountain. Head up the staircase and enter the manor. It should still be morning, so the Maid will be in the kitchen. Head down the right hallway, then north and then left. She’ll be standing next to the butler. She’ll agree to talk to the butler about how to get stains out of the…mugs if you will go help her get her crossbow from Quinlan. Agree to her terms (YES). ALRIGHT, TIME TO TALK TO LYNN’S FATHER.

Step 6: He don’t like you much.
Head out of the manor and back down the staircase. Head east and take a turn south after the library. Head into Lynn’s house and talk to Quinlan. He’ll probably tell you he doesn’t like you before talking about the crossbow. He’ll say he can make the crossbow, but he needs to get a stock to restring it. He’ll mention that Mariana has been working on it for him and ask you to fetch it. Say you’ll do it (YES) and leave the house. WELCOME TO THE THUNDERDO-I mean THE ARENA.

Step 7: The Former Commander
Head north past the library, then west past the church and ashwood manor. When you see the building with the big potion shop outside of it, head south. You need to enter the big, grey, building which is the ARENA. Head north immediately and talk to the woman blocking the entryway into the Arena. This is Mariana. Talk to her until she brings up the crossbow stock. She won’t ask you for anything, she’ll tell you that you must do something for her or she won’t help you. You have no choice and she gives you a bounty to be posted by HUGH. So…LET’S GO SEE HUGH.

Step 8: The Deputy
Head out of the Arena. Hugh is normally outside in clear weather or in the jail if it’s raining or snowing. It should be mid day, so if it’s clear weather, he’ll be just below the entrance to the church. Locate him and speak to him. He’ll tell you he can’t post any bounties because he’s all out of ink! He’ll tell you the shipment went to Ashwood’s Manor and ask you to get it for him. Tell him you will (YES) and head back to Ashwood’s manor.

Step 9: The Butler hates you.
Head into Ashwood’s Manor and talk to the butler. AS it is still mid day, he should be just left of the entryway facing the north wall of that room. He will give you the ink shipment on the terms that you tell Hugh that he needs to not send any more things to the manor. YOU HAVE FINISHED THE FIRST HALF OF THE TRADE QUEST. Everything from now on is going back in reverse order and fulfilling everyone’s requests.

Step 10: WE HAVE TO GO BACK
I’m going to list the order in which you need to return to people to do the quest in this next section.

….What’s that? 10 gold not enough? Tara will give you the Winged Boots as well.

Step 11: I am…THE FLASH
The most important thing to do after getting the boots is head back to the Boot Shop. Interact with the winged boots and confirm you want to put them on. Read the tool tip on how to use them and remember you can have one type of boot equipped at the same time.

And there you have it. A guide to A Small Favor, which is probably the most important side quest of every category for this game. Thank you for reading, and good luck with your run!

That’s all we are sharing today in Prodigal Winged Boots – A Small Favor Guide, if you have anything to add, please feel free to leave a comment below, and we’ll see you soon.
Credit to SubspaceHighway