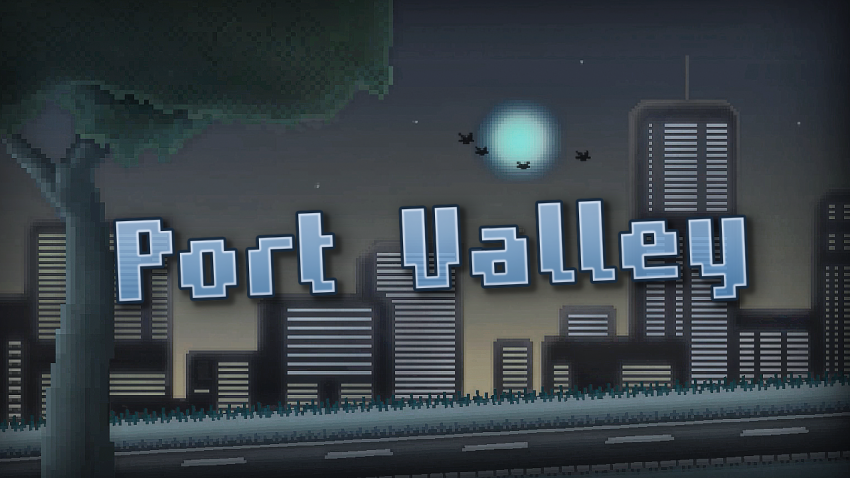 A walkthrough to help you get 100% achievements in the Port Valley demo.

This is a guide to help you get 100% of the achievements in the demo of the game Port Valley. I’ve never actually made a guide that wasn’t nothing but pictures before, and I’m not actually sure that I’m ready for real grown-up guide writing, so please feel free to comment if I missed something or you feel this guide can be improved somehow.

Special thanks for the Port Valley game dev for giving me step-by-step instructions on how to unlock the hidden achievement, because I guarantee I would not have figured that out on my own.

It’s a point and click adventure game, so really just the mouse, but there are still a few tips you might find helpful:
Walkthrough
Hit CONTINUE to watch a scene.

When the scene is over, pick NEW GAME and whichever difficulty. (I don’t think it matters. I think easy just saves automatically and old-school doesn’t.)

ON YOUR SECOND PLAYTHROUGH:  Go to the OPTIONS menu and turn hints ON to unlock “You cheated not only the game, but yourself”. Hints being on adds a fortune cookie to your inventory that gives you vague hints depending on which part of the demo you’re in if you use it. You can turn it off again after getting the achievement if you like.

ON YOUR SECOND PLAYTHROUGH:  Press the “B” button on your keyboard to bark and unock “*bark*”. You may need to look at the menu with the controls listed on it in order for this one to work.

Look at the bag in your inventory to get CLOGGED WASABI PASTE TUBE.

ON YOUR SECOND PLAYTHROUGH: Pick up the SCREW on the ground behind your scooter.

Talk to the masked guy and take part in his quiz. Pick any answer, and you’ll receive TEAM DEVON BUTTON PIN.

ON YOUR SECOND PLAYTHROUGH: Talk to him again, and choose “Devon wants to be the mayor now?” then end the conversation.

Walk to the right to trigger a scene.

Talk to the man with the alarm clock and ask him about chewing gum. Talk to the little girl, then when the conversation ends automatically, talk to her again and ask for a piece of her gum. She wants the banana balloon, so talk to the masked guy again. Ask him for the balloon. He won’t give it to you, but he’ll give you PICTURE. End the conversation.

Use PICTURE on the little girl, and you’ll receive SECOND HAND GUM.

Use WASABI STUFFED GUM on the man with the alarm clock and you’ll automatically receive SCREWDRIVER.

Use SCREWDIVER on the scooter box to receive WALLET WITH A CREDIT CARD.

Walk to the right to trigger another scene, then walk further right to the next screen.

ON YOUR SECOND PLAYTHROUGH: After the scene is finished, walk back to the previous screen. The scooter box is open again. Look at it to receive GOLDEN KEY. Go back to the right screen. Use GOLDEN KEY on all three residential building doors (11, 15, and 17) to unlock “Persistent”.

Talk to one of the cops, and you’ll try entering the building.

ON YOUR SECOND PLAYTHROUGH: Talk to them again and ask what’s really going on here. Ask about the parking meters, then Devon Wright (that dialogue choice should appear after asking the other questions). Tell them about the little girl. Walk back to the previous screen, and talk to the little girl again. Ask her to come with you. She won’t. Return to the area to the right.

Walk to the right and enter Wrenchland. (I wonder if it has any relation to Spatula City?)

Look at the EXTREME REPAIR KIT on the counter at the far left.

Try talking to the clerk. Use the take-a-number dispenser on the left wall, then talk to the clerk again. Tell him you’re interested in the tyre repair kit.

Exit the store for another scene. The plumber will back her van into a streetlight, but don’t worry about it for now. Enter the Katsura building and a scene will play out, after which you will have BAG WITH FOOD ORDER.

Use the switches on the far left of the room. Pick the right switch (or the left switch, for a funny scene). Once the fan is off, quickly pick up EMPTY JOSEPSI-COLA CAN. (It’s on the counter to the left of the two people sitting.)

Leave the building. Talk to the cops, and tell them you have to get into the building. Pick “I’m supposed to make a delivery inside this building”. Ask who the person they keep talking about is, and they’ll describe the alarm clock guy. End the conversation.

Use WALLET WITH CREDIT CARD on the ATM next to the cops. Note the dude walking behind you. Pick the first option when prompted to get WALLET WITH MONEY.

Try to enter Wrenchland, and you’ll bump into the guy who was walking past you in the previous scene. Pick any dialogue options. When the scene ends, you’ll be inside the store, minus your wallet but with a WRENCH. Leave the store.

Go back to the building with the police and use JOSEPSI-COLA CAN FULL OF WATER on the parking meter to receive PARKING TICKET.

Go back to the river area. Go to the banana stand and use THIN NUT on the money box after the scene is over. Pick any answer to receive EMPTY WALLET and MOBILE PHONE.

ON YOUR SECOND PLAYTHROUGH: Find the shadow in the window above Wrenchland, and interact with it.

Enter Wrenchland. Watch the scene, then leave the store.

Head toward the left of the screen for a scene with Nora, then head left to the next area.

ON YOUR SECOND PLAYTHROUGH: When you regain control, look inside the scooter box. Picking up the screw again should work, too.

Head past the blown-up banana stand and talk to the guy with the balloon. I don’t think it matters which dialogue options you choose, so just pick them and let the scene play out. Picking “Go on, arrest me. See if I care” on the last choice ends the conversation, but you can pick the other two options first if you want. On your second playthrough, you can use the CHEAP SCISSORS on the balloon. When it’s over, walk as far to the left as you can.

Pick up the USED JOSEPSI-COLA CAN from the table. Go right, in front of the guard rail, and use the USED JOSEPSI-COLA CAN on the graphics and mechanics engine. It will look like the game freezes, but it didn’t. Just wait. When the dialogue box appears, click CLOSE PROGRAM twice. When the BROKEN BUTTON falls, pick it up and use it on the dialogue box, then hit CLOSE PROGRAM.

On your first playthrough, after the credits you can try to play again on the difficulty you didn’t choose before, and if you follow the directions that appear it will erase your save file so you can play again.

On your second playthrough, the demo will close automatically after the credits. Open the demo again, and try to start a new game on the available difficulty. A secret scene will start.

Look at the key in your inventory, then interact with the question marks in the background. Pick either dialogue choice both times. After the scene ends, your save file will be deleted, you’ll hear the Twin Peaks theme music in your head (I did anyway), and you’ll unlock “&()%)=·$·$=·==$¿¿?”.

Congratulations, you should have all the achievements now.