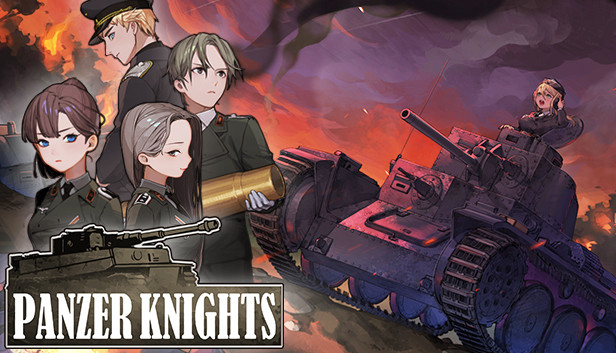 For Panzer Knights players, this is a guide that explains how and what can be modified inside the game files with pictures. Let’s check it out.

Just for the record, there is no official modding support for this game and this is all unofficial.

For the purposes of the guide I will be using a Girls und Panzer overhaul as an example.

To start you will need to access the game’s files, which you can do by right clicking on Panzer Knights in your Steam library, then go to the “Manage” tab and then left click on “Browse Local Files” as shown here:

After clicking on “Browse Local Files” as shown above you will end up here:

Then keep clicking on the folders as follows –

Where you will find the folders for the assets of the game here:

I would make a gif of this process as well but sadly my recording software doesn’t work in Windows Explorer.

What you can do (Art/Pictures)

Editing the character portraits, which are found in the “art” folder of which you can view the contents of here:

The folders “character_I”, “character_s” and “wingman” all contain character pictures as you can see in this example picture: 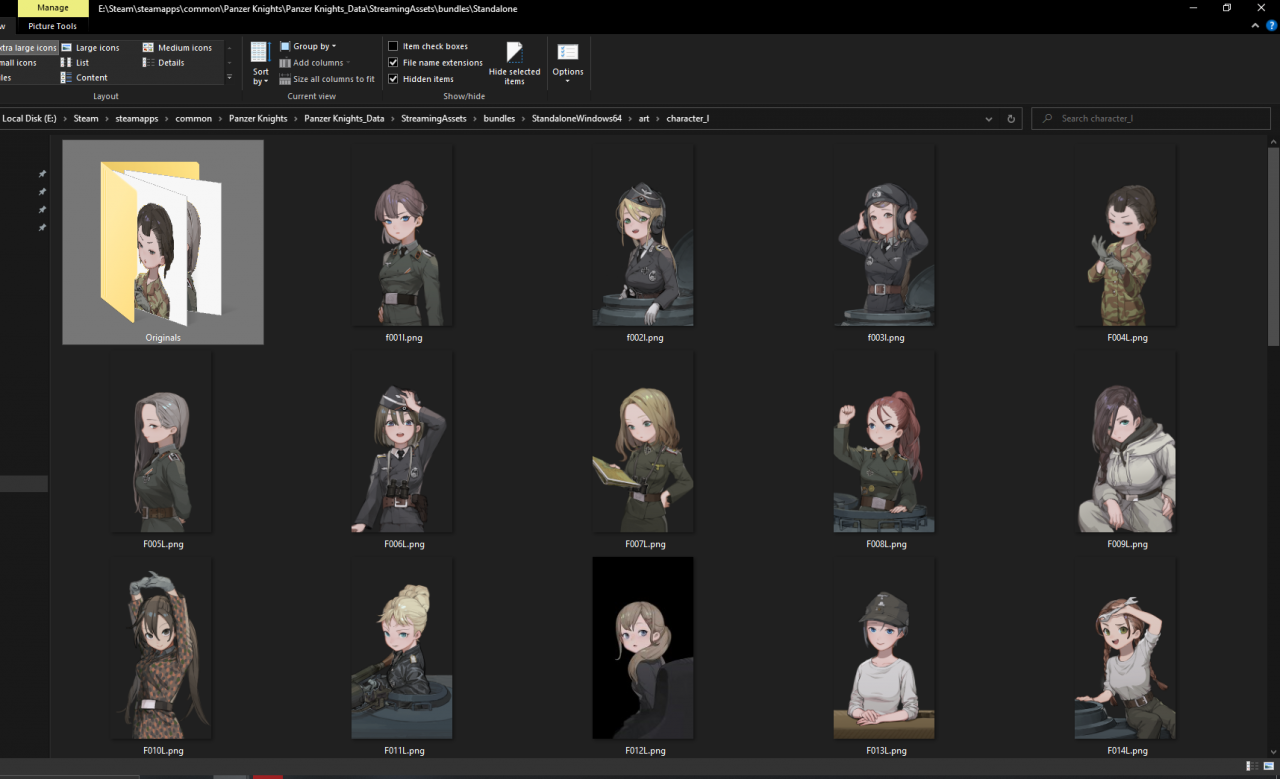 In this folder specifically, as in “character_I”, are all of the full portraits of the characters which have the dimensions of 400×720, meaning a width of 400 pixels and height of 720 pixels and are in the format of “png” with a transparent or alpha channel background.

Note: Simply renaming a picture from .jpg for example to .png will NOT work. You need to properly convert a picture from another picture type if it’s not already png in order for the game to read it, otherwise you will just get a blank and empty picture.

In the “character_s” folder are present all versions of the regular portraits but in a square 128×128 pixel format meant for the character selection screen and others, all of the above what was said for the pictures in the “character_I” folder section apply here as well about the picture type and so forth.

The same as the above also applies for the pictures in the “wingman” folder, these are the character pictures of your friendly tanks in the platoon.

There is one last folder called “character eyes” that seems to contain an open and closed versions of the eyes of the character portrait. These are I’m assuming used for the bubble texts to create the illusion of the characters opening and closing their eyes so they don’t look like robots staring into your soul all of the time, or something.

What you can do (Audio/Voices)

This is the part where we talk about the sounds or character voices of the game that just got recently added in the 1.0 full release of the game so this is an entirely new feature not present in the earlier “Early Access” versions of the game.

The Audio is, obviously, contained in the “audio” folder of the game as seen here: 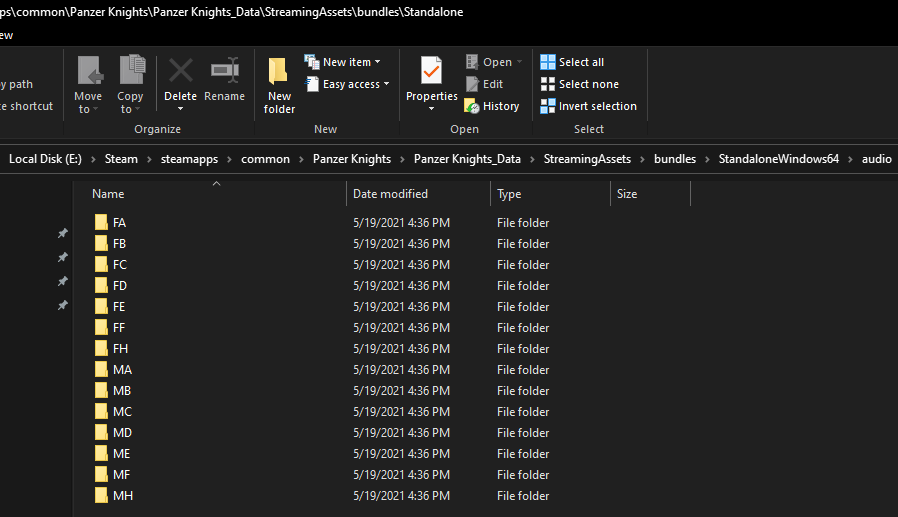 What you see is 14 folders of character voice lines saved in .ogg format.

They are in Japanese and I am unsure if there will be English, German or any other voice lines in the future

Each folder corresponds to the character name in the game files, for example “FA” means Female A, as in the first female character which had a portrait name of “f001l” in the above art/pictures section and the name “Stefanie Winter” in the actual game, how to change the names of characters will be presented in the next section.

Moving on with the audio/voices of the characters, there’s other “F” character voice folders going all the way up to the letter “H”, as in “FB”, “FC”, “FD” and so forth which stand for the other female characters in the game.

The letter “M” stands for male, as in “MA”, “MB” and so on which are obviously the male characters. Again the folders go all the way to the letter “H” which means there are 7 female and 7 male character audio folders, so 14 in total as specified before.

Each folder contains around 90 something voice lines but some characters have a bit less than others, especially the males or at least that’s what I’ve noticed.

So once again, the file format or type is .ogg, meaning that in order for you to replace these with your own custom files, let’s say with a voice file from the Girls und Panzer or Company of Heroes voice packs from War Thunder, if they are mp3 or wav you will need to properly convert them to .ogg as with the picture files and not just rename the file extensions because that will simply not work.

What you can do (Text)

As shown in this picture: 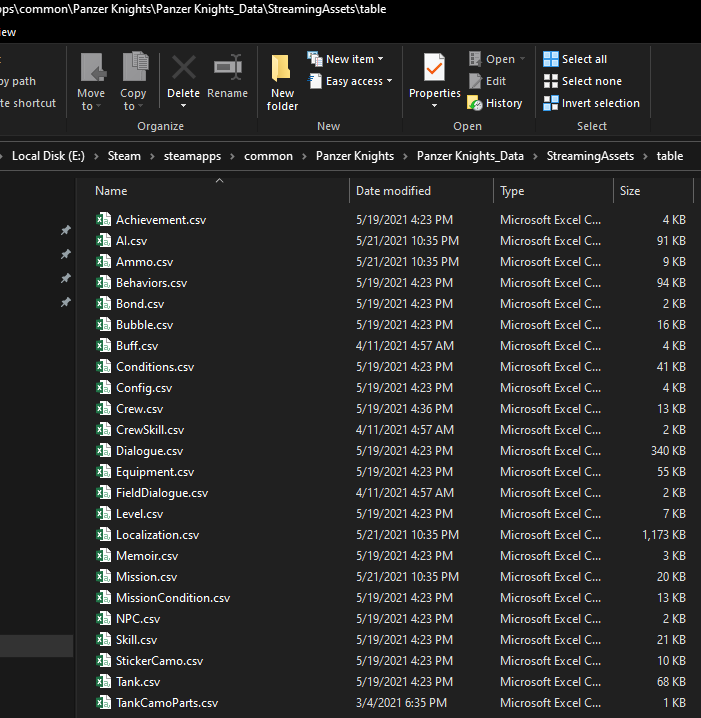 These files are in the .scv format which seem to be Microsoft Excel type files which I guess you can also open with Openoffice and other such free table reading alternatives if you don’t own or have the Microsoft Office suite.

Inside the Localization.scv file you will find the character names: 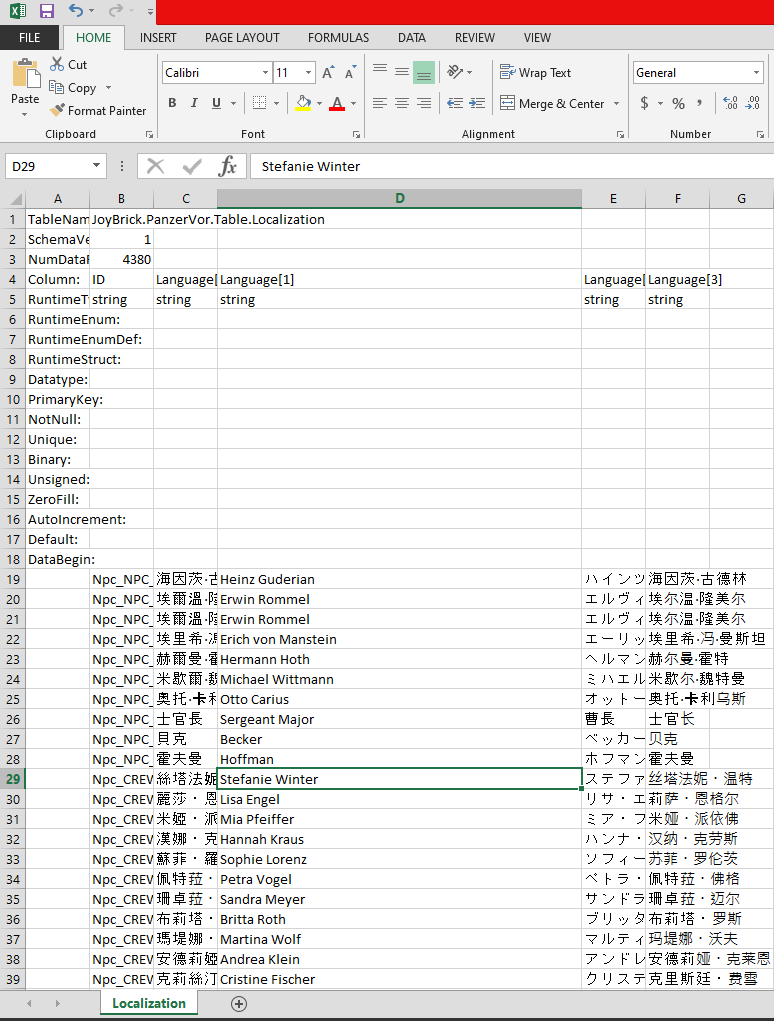 As you can see there’s Stefanie Winter, the first female character’s name which I mentioned in the previous audio section.

Note: There are 2 references here, the first one is “Panzer Vor” from Girls und Panzer made by the developers and the other is the last name of Stefanie is also the family name of the 2 main characters from the German WW2 series “Generation War”, or “Unsere Mütter, unsere Väter” in German.

More or I would say most text featured in the game is included here which also includes the character backgrounds: 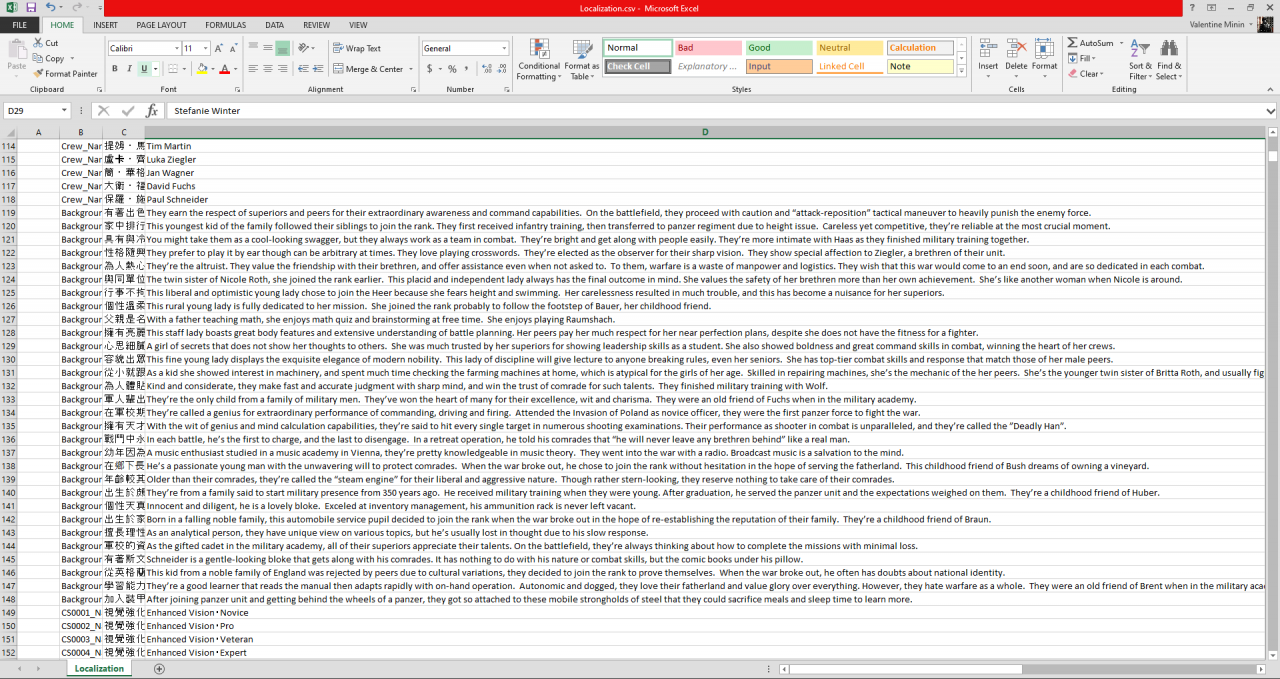 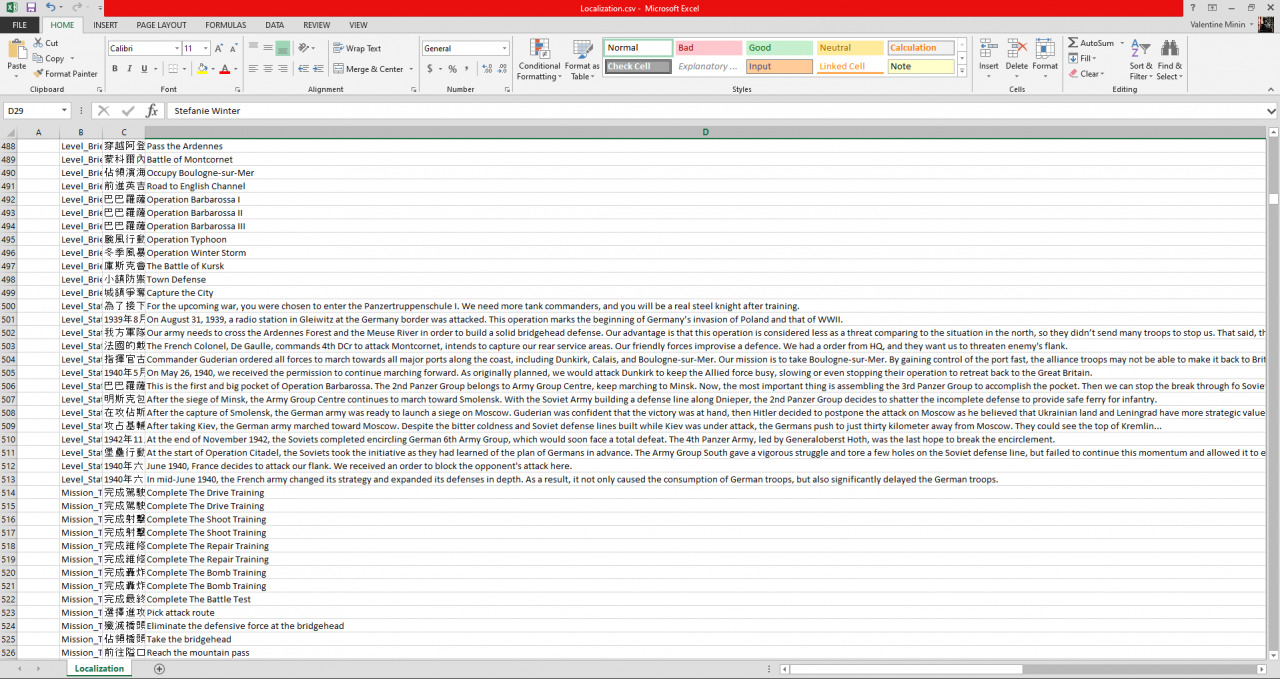 Plus other things such as the character bonuses and so on and so forth, you get the idea. I am assuming that all of these are editable so an (almost) complete overhaul of the game is, at least in theory, possible by replacing all of the pictures, audio and text.

As mentioned at the start of the guide some Girls und Panzer modifications will be used as examples of what can be done, at least with the picture files. 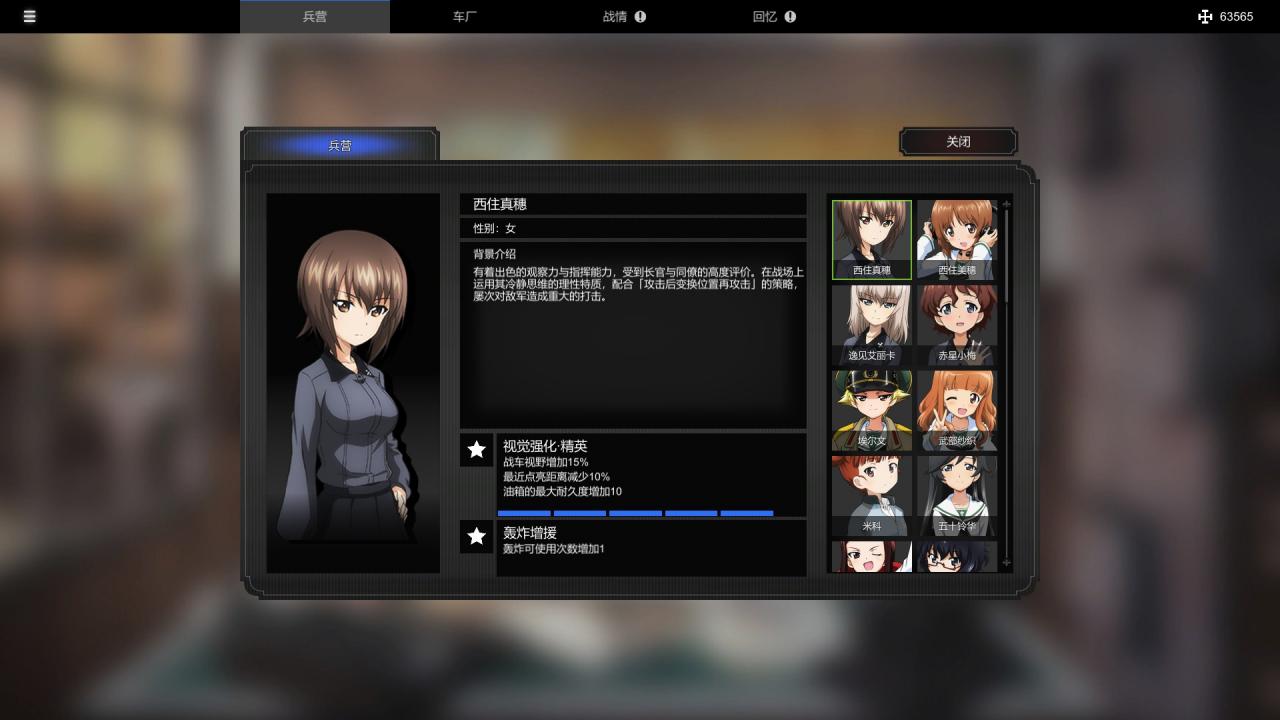 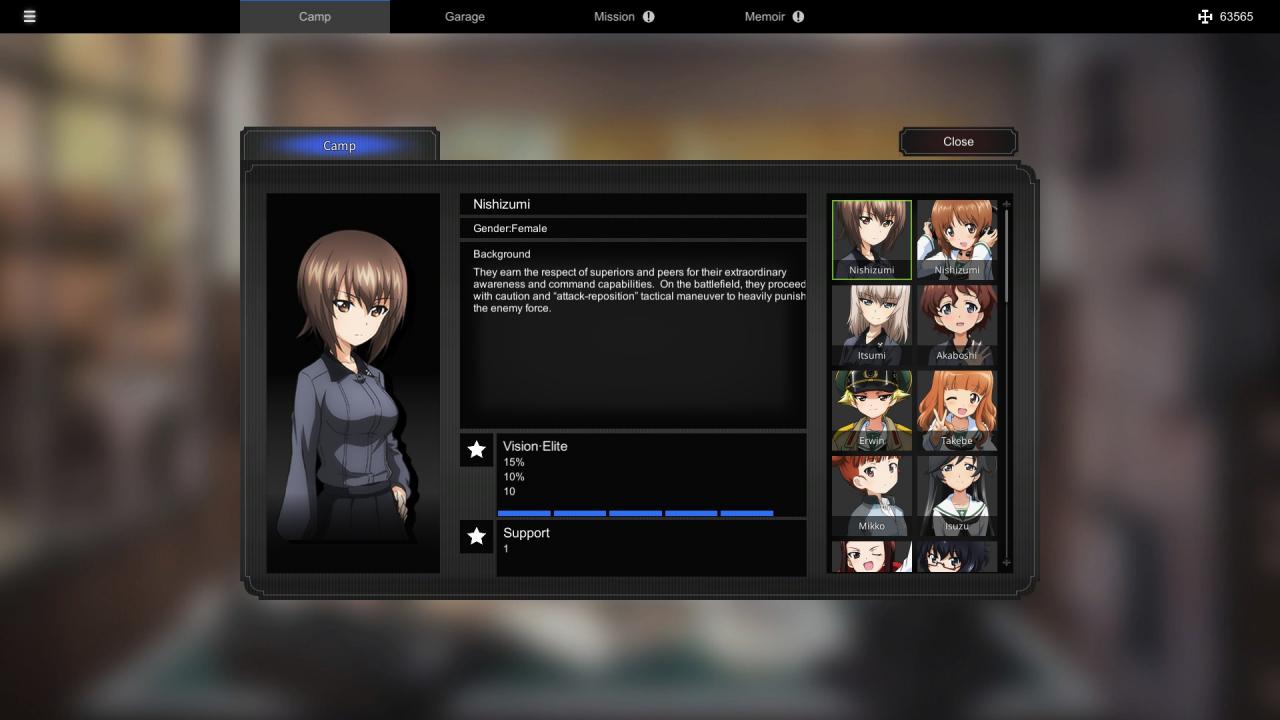 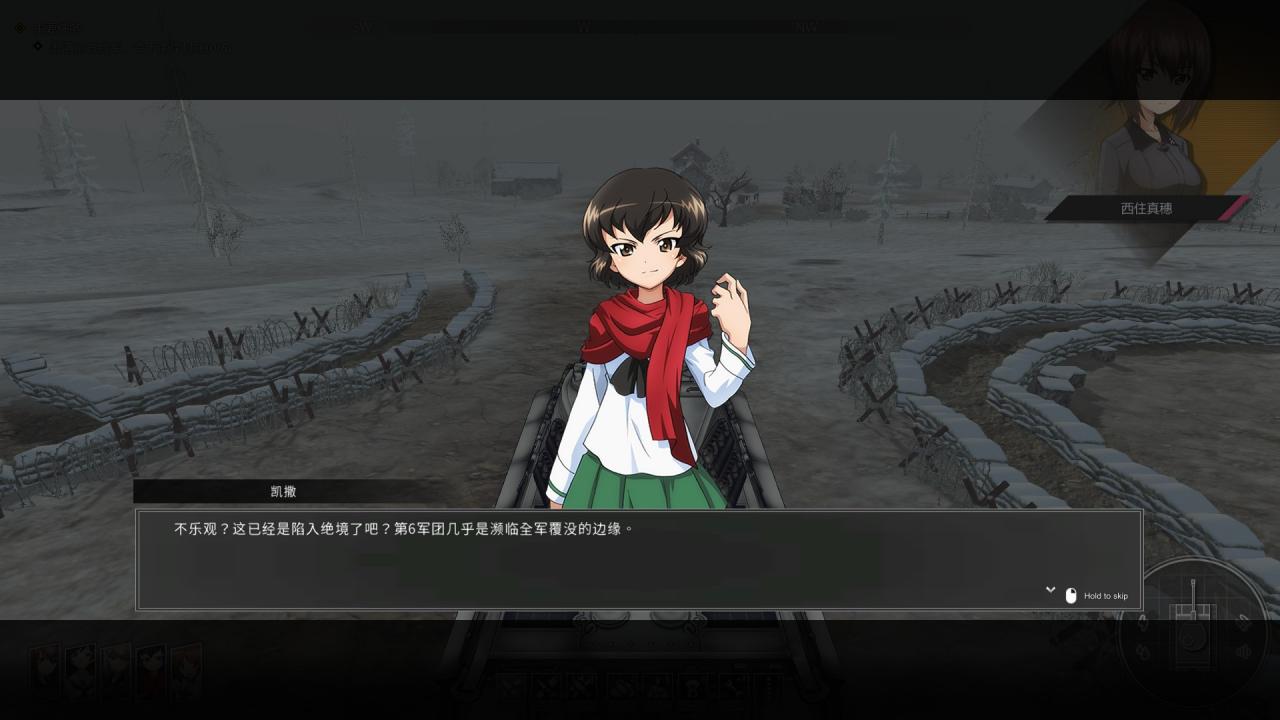 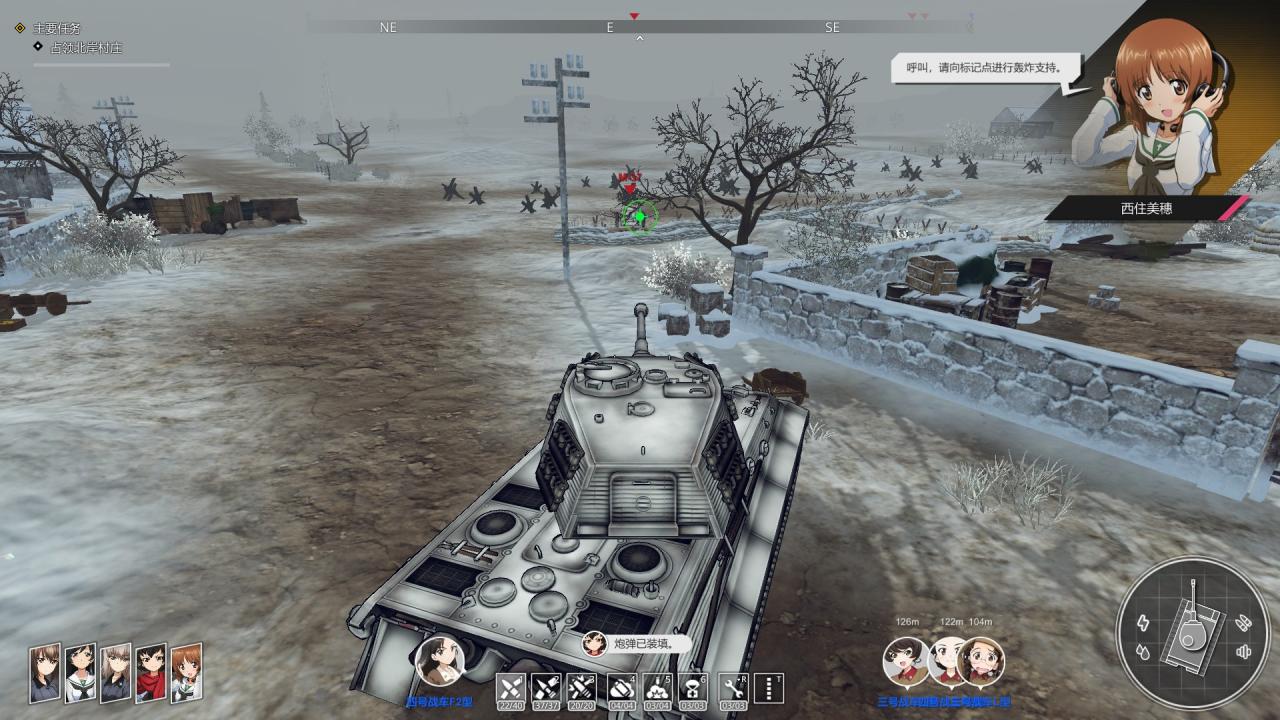 These pictures are courtesy of my friend, AGENTS OF G.E.N.S.E.C.

Between the 3 sections, as in art, audio and tables, the pictures, voice and text files can all be edited to create an overhaul mod for the game as mentioned previously.

I want to once again thank my friend AGENTS OF G.E.N.S.E.C. for helping me mod the game and providing the picture examples of modding in the game and what’s possible.

Lastly, nothing here is final and everything is up to be changed up, from the pictures to the text and in the future I also hope to provide some videos as well as a showcase of the modding potential of the game with audio and everything.

I would also very much appreciate any feedback, ideas and suggestions from people about the guide.

Cheers and thank you for taking the time to read my blocks of text mixed in with pictures.

That’s all we are sharing today in Panzer Knights How to Mod Guide, if you have anything to add, please feel free to leave a comment below, and we’ll see you soon.
Credit to [503] A. Soldier and AGENTS OF G.E.N.S.E.C

2 thoughts on “Panzer Knights How to Mod Guide”