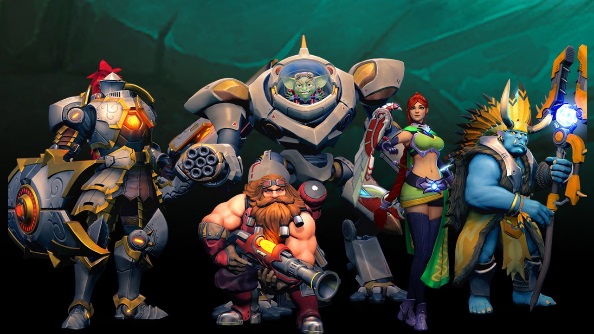 A short guide for making or picking item loadouts.

Welcome Overwatch players! no, wait… er.. paladins players! to my guide. today we’ll be going to show off some good Burn Card loadouts for classes and situations that you may find yourself in.
Keep in mind that these aren’t “YOU MUST PLAY IT THIS WAY OR YOU ARE WRONG! REE!”Simply think of these as blueprints, tweak them how ever you like in game, you can buy them in any order and can be different items, Buy the first item to tier 3 then go to the next one, Just Build away.

As of Patch 2.01 – Fire and Ice, Burn Cards are no longer locked to just picking one of each type. You can pick up to 4 of the same Burn Card Type.

For each build section i will explain the first build then quickly summarize rest, so its not too long.

Lets Dive into this Hole shall we?

For those of you who are barely new to the game or just like to enhance your already big brains, here’s a quick refresher.
Burn Cards are items that you can buy for your champion at the anytime during the match as long as you are in the spawn area and have enough credits. They can enhance your champion even further as a tank, flanker, etc.There’s 4 types:

And Remember to always think before you buy or just enable auto buy. (yeah right.)

There, now everyone has the big brain.

First, Frontlines the meat shield, the tower of power, the tank and sometimes the champ that dies first because he forgot to raise their defense. Frontlines are important due to having a high health pool, high shields or just good crowd control, without them you bascially have your squisher units forced to hold line which may or may not work.

Usually try to focus on building defense over offense in most cases, because even though frontlines are great walls of flesh they tend to be rather weak in terms of dealing damage and having the speed of turtle, no offense makoa.

Choose either Haven or Blast depends on enemy champions damage type.
haven for direct and blast shields for area damage.

Next choose either veteran or rejuvenate.
Veteran if you lack a healer (or player isnt good) or if you cant deal enough damage to liferip.
Rejuvenate if you have a good healer (or that friends of yours thats super good) to heal off faster that enemy damage.

Then choose between Master riding for those big maps or morale boost when you want to spam your good ultimate.

Finally pick either cauterize or wrecker. Depends if you got annoying healers or high shielders.

Haven for better defense, master riding to get back into the action, rejuvenate for that easy healing and cauterize so you can screw the enemies healing. Overall a balanced tank.

2 Build: The Iron Wall
Choose 3 Defense cards and choose either one Attack or healing card.
Example:

Here we go haven and blast shields for the awesome defense, taking lluminate for those annoying stealth enemies or take Resilience for CC, then rejuvenate to keep you tanking longer if you got a good support.

3. Build: Power Tank
This is a like a hyrbid def/atk tank combo, like they always say the best defense is the best offense.
Example:

Getting Cauterize for anti healings (or get wrecker) then kill to heal for that free assist/kill healing, taking blast (or haven) for defense and then get nimble to increase your base speed, so you can keep up with those quick champs. This is best used in modes like Team deathmatchs.

Damage Champs are your bread and butter of the team’s damage, The one man army, The champion that people will claim have aimbot(skill) or can be that one person that just gets killed off in the corner of a map and just shoots the ground 90% of the time. Champions like these can really deal that high damage at the cost of having less health, defense or something else.

Loadouts will usually focus on damage (duh) and sustainability for themselves. defense is probably least “important” for you but you can still build around it.

1. Build: Balanced Damager
First Pick one Red or Green item at the start, then pick the other item type you didn’t pick for the second one.
Attack items: Cauterize or wrecker- for tearing down enemies health/shield or deny another damage enemy that healing for a easier takedown.

Or
You can go for Healing items: Kill to heal or liferip- To sustain yourself longer on the battlefield. pick Liferip if you do high damage or rather get heals from landing hits or kill to heal to reward you for getting kill/assists.

After picking your 2 items then choose a utility item. Nimble if your character walking speed slow outside of their escape ability. Morale boost if your ultimate is strong like drogoz’s dragon punch.

For the final item pick any defense item that works for you in that match. Haven/blast for taking hits, Illuminate for annoying stealth champs or Resilience for those lengthy stuns and debuffs.

You’ll be a killing machine in no time, just make sure to help your team every so often.

This one has sustainability written all over it, taking kill to heal and liferip bring in that nice heals, cauterize to keep that another guy from doing the same thing and nimble to keep you move around to either group up with your team or moving in on a lone enemy

A Shutdowner keeps the pressure on your enemies, Lowering their healing, sustainability, destroying frontline shields, and not giving them an inch to recover. While racking up kills, healing and building up your ultimate with morale boost and destroying important targets on the other team.
You can pick a 2 items of either wrecker, bulldozer, or Cauterize, depends on the type of enemies you’ll fight.

The Supports, the champs that got those supportive skills that help their teams, with buffs such as shields attack, healing or the first guy to die and people on your team yell at you for not being a “healer” even though you’re just a support. These guys tend to focus on giving your own team the buffs or heals they need to outlast and overpower your enemies and still being able to take some enemies down too. Usually, they have good skills for sustainability but tend to move slow or deal less damage than other roles.

1. Build: The Good Supporter.
First, you can pick between morale boost or chronos

If you feel you can do better by buff or healing take chronos or if you can pull off your ultimate that can change a match take the boost.

After that pick red and green item whatever order you feel can help more in your match.

and
All good choices but not rejuvenate unless there’s another healer.

When you have 3 items, finally pick 1 blue item.

Whatever helps you the most.

Haven for that tanky support, chronos for faster cooldowns, kill to heal and cauterize for that healing/anti healing.

For this one take chronos and nimble to boost up your cooldowns and speed. Then choose one green item usually kill to heal is the best option and pick 1 red item that worrks best for the match.

This is best for team deathmatch, nimble to get around, kill to heal for extrra healing, and pick whatever the last two items you want. i go with cauterize to fight against other battle supports or healer and deft hands to always have a full ammo.

Lastly, Flankers.
Flanks are your sneaky beaky teammates that will gank and kill important targets, healers, etc or that one person ends up going around the map and behind the enemy only to end being killed by the healer they were gonna flank. A good flanker can really support team by eliminating annoying enemies with their skill kits used to trap, ambush or deal burst damage. Champions like these will rely usually more on their skills than weapons a little more while damagers tend to focus on their weapons.1. Build: Balanced Flank
So at start of your match choose a green or red item, anything should work but the options people choose the most is:

A Solid start then take other one green or red item vice versa. Next pick for your 3rd item
yellow item. nimble can be good for slow flankers with long dash cooldowns or none, examples like zhin, skye, or moji. Flankers have good ultimates that can really either them get more kills like moji’s Bon Appetit or debuff enemies like Maeve’s midnight. Master riding is nice to have if you need to get to an area first or need to go around a map.

For the last item you can choose pretty much any blue item that would benefit you the most. Illuminate is good for annoying skyes or strixs, Resilience is great when you get caught in too many annoying stuns or slows, like buck’s net or strix’s flashbang. If you need to more take hits just go for haven or blast if thats your deal.

You got your anti heals, sustainability, speed and CC reduction in one package, go get them baby.

This is putting in speed in your flank, you take master riding for getting yourself into the battlefield or you die too many times because that kinessa is too aware of her surroundings and you want to get out of spawn faster. Taking Nimble because lets face it, half these flanks are so slow on foot its like they skipped leg day or something. Kill to heal and Cauterize, (for the 100 millionth times i have said this in the guide.), for getting heals and anti heals.

This focuses on improving on reload speeds so you can deal out more damage, be less caught off guard, having nimble for that sanic speed, kill to heal and life rip for those sweet heals. (i said this like probably 3 trillion times already.)

Well thats all i have so far, i’m not sure if i want to add more than 3 loadouts per section but those should be enough for you guys to get the gist of it. Maybe i’ll add more or make a stupid silly section for this but it is a quick guide.

Thanks for reading the whole thing if you did, or i am pretty sure most of you just skimmed most of it and wondering why i wasted my time, but the important thing is you guys now have big brains.

If you guys want a longer guide to the items themselves and what they do. i got your guide right here.