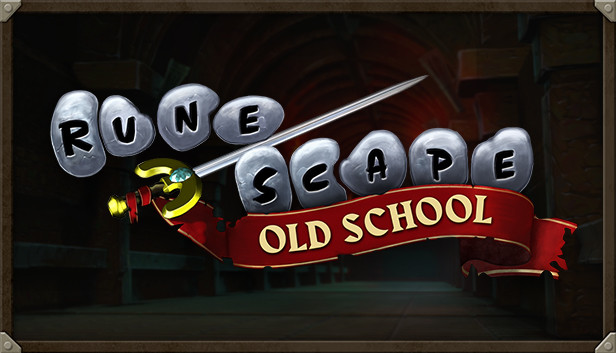 For Old School RuneScape players, this is a guide for the “Misthalin Mystery” quest which is a thriller and mysterious quest, let’s check it out.

Head through the gate, directly west is a fountain. Pick up a bucket next to the fountain. Head north of the fountain to trigger a cutscene, where Sid is murdered by the Killer. 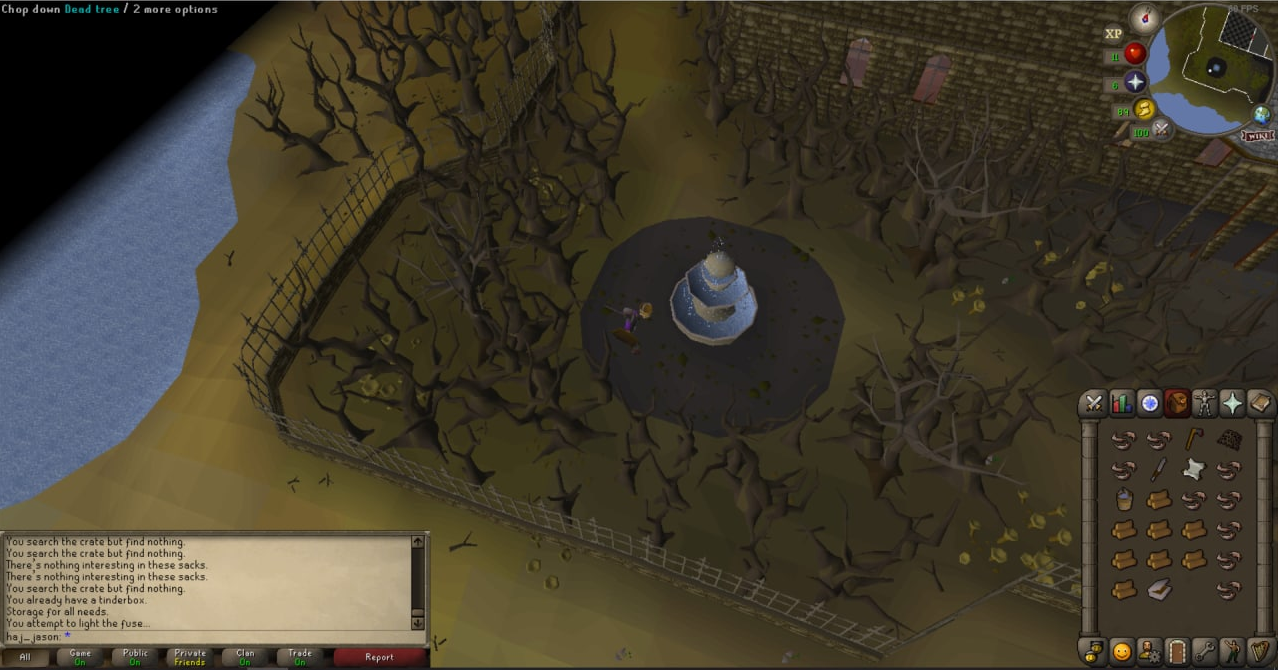 Use the bucket on the barrel of rainwater, and search it to obtain a manor key. 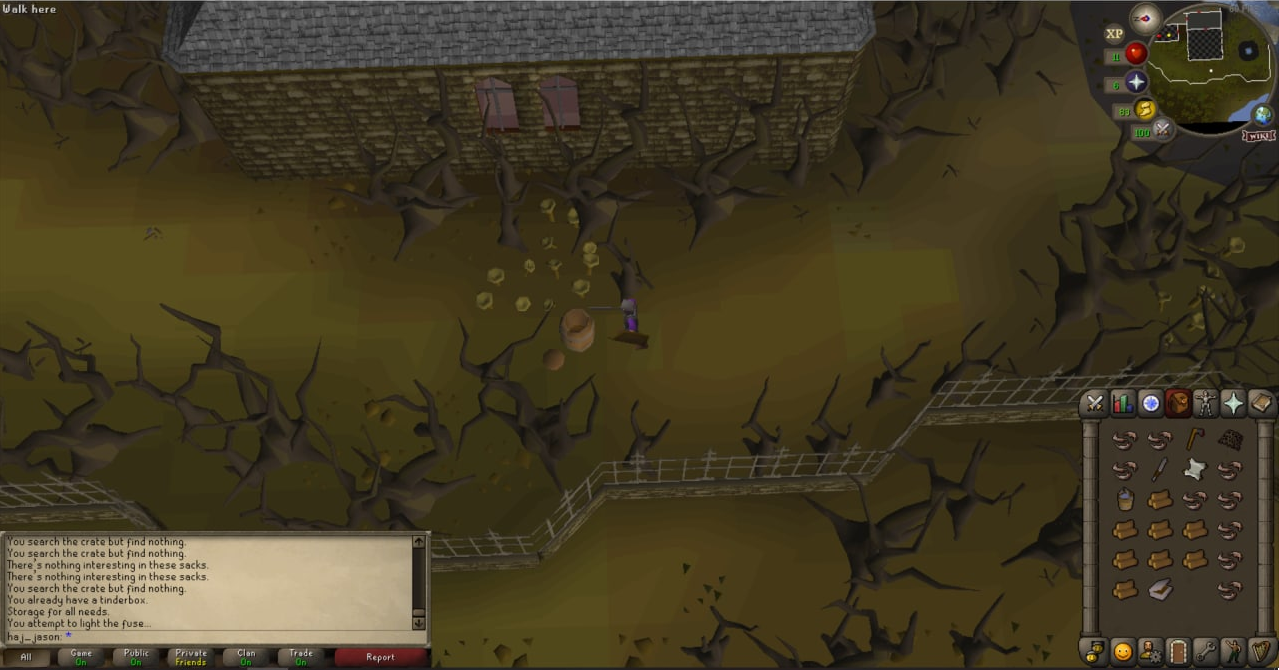 Enter the manor, pick up the knife on the table, 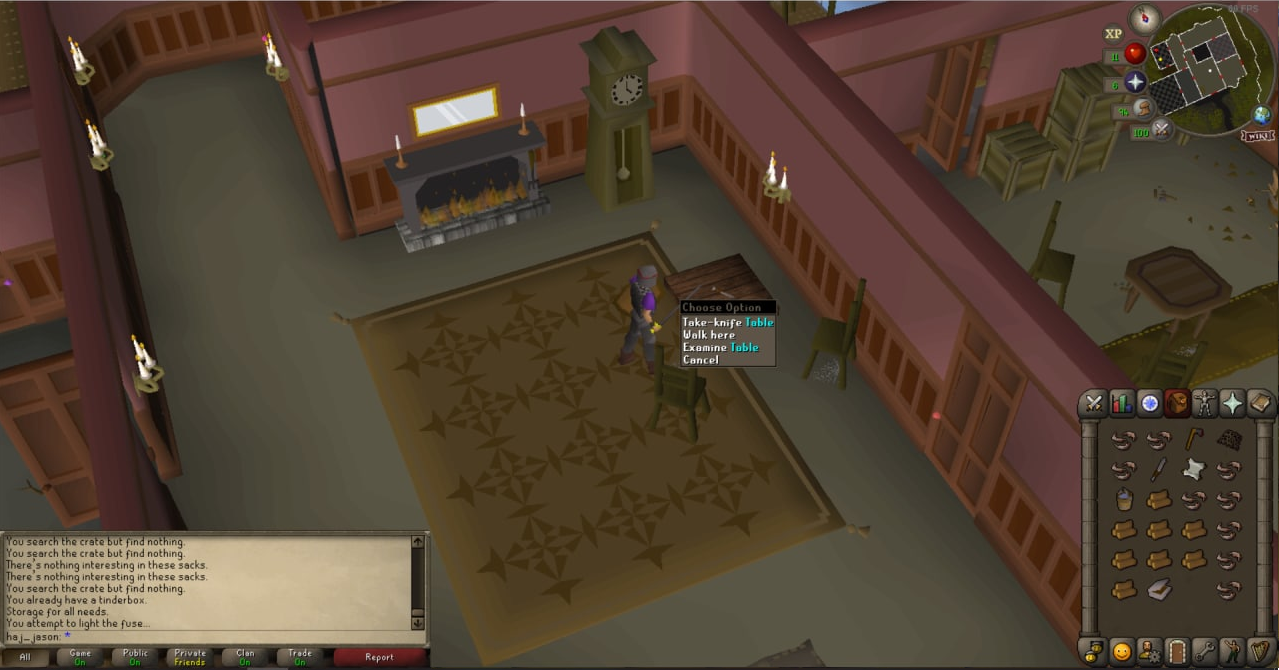 and attempt to open the door with the pink knob up north. This will trigger another cutscene, where Tayten is murdered by the killer hiding in the wardrobe. Before returning in the wardrobe, he slides a note under the door. Pick it up and read it. The note is:

Isn’t murder just a work of art?
Beautiful, yet haunting , like the blade of a knife.
As we wander through the valley of death. 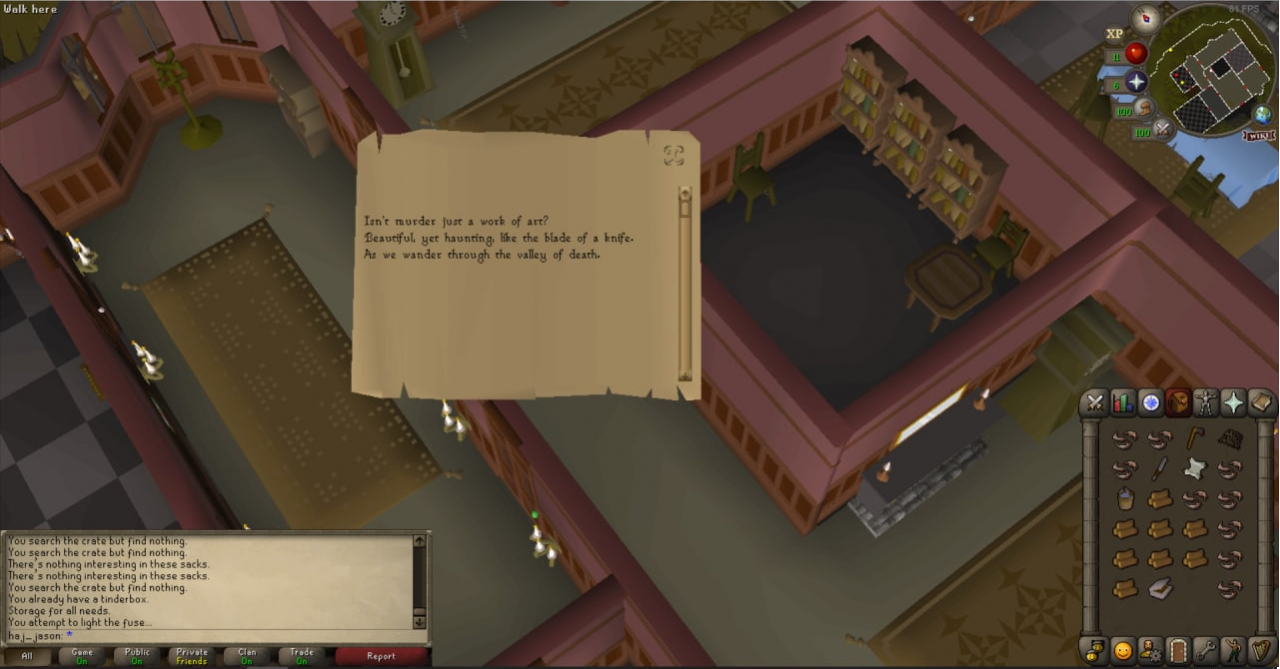 The riddle refers to a painting found in the adjacent room to the southwest. The painting is one with mountains, a blue river, and the sun on the horizon (on the east side of the room). Use the knife on it, and search it to find a ruby key. The doorknobs on the doors throughout the mansion will indicate the appropriate key that opens them. 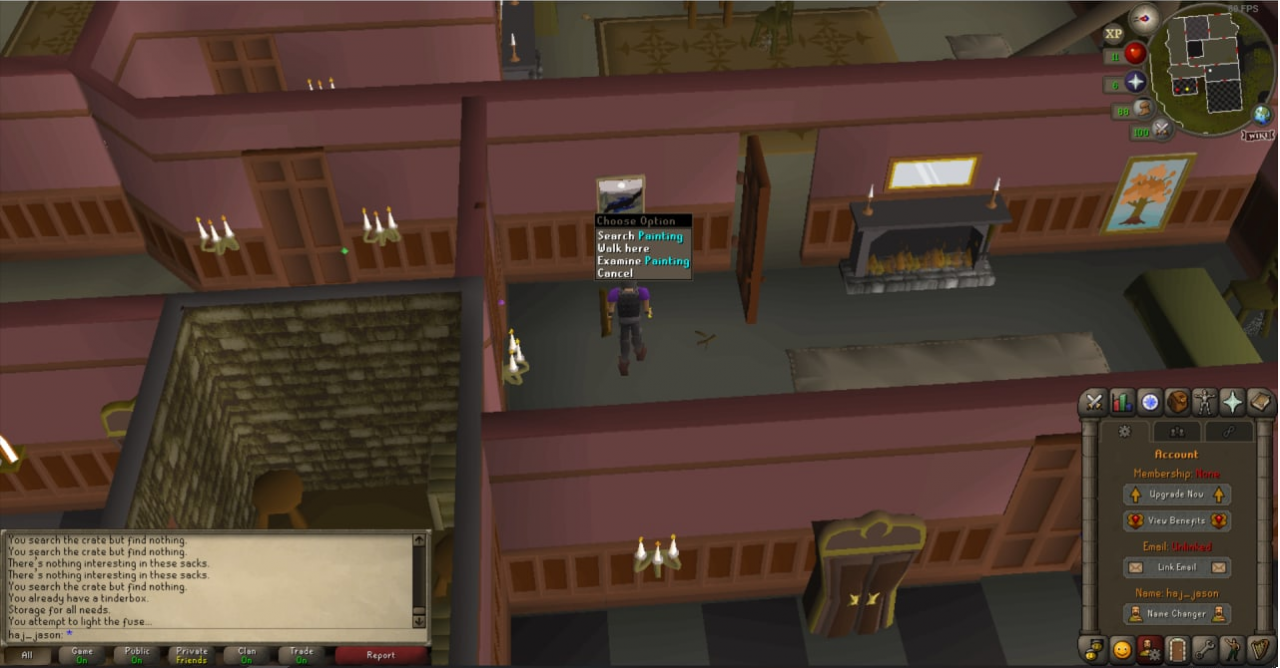 Open the eastern door, and take a tinderbox from the shelves. Light all four unlit candles in the room, and you will get a message the room is warm enough to dry the fuse attached to the barrel of explosives. Then, use the tinderbox on the barrel next to the damaged wall. Exit the room to trigger the explosion. 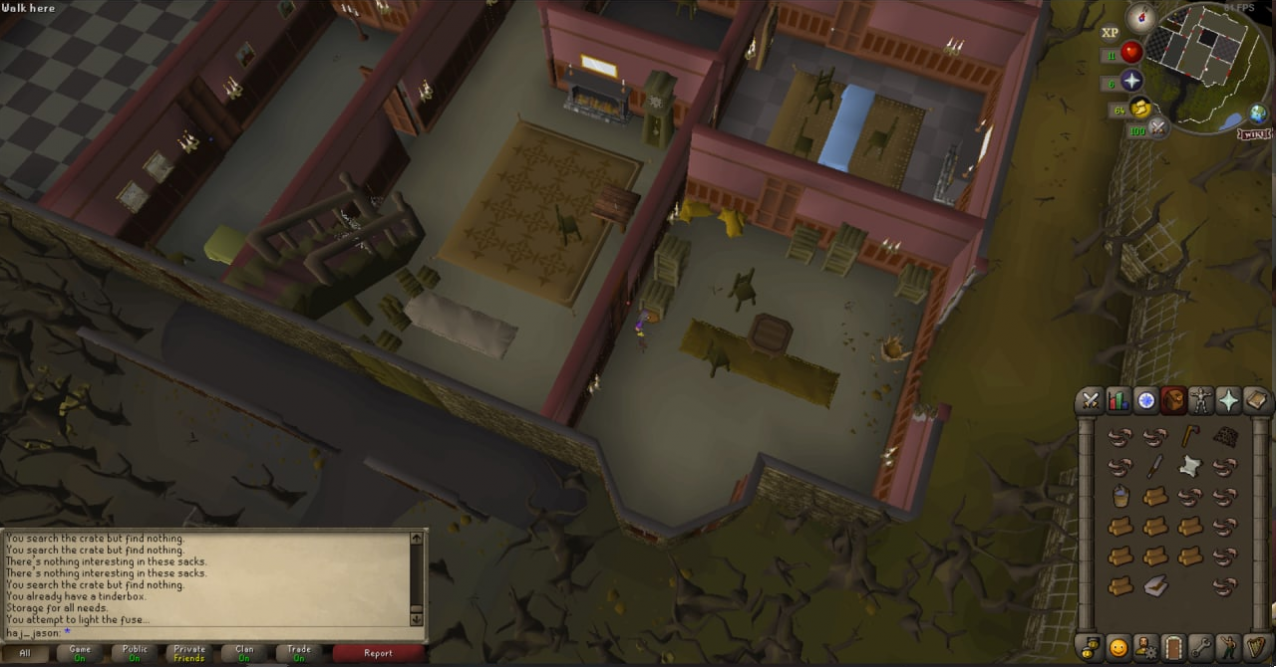 Climb over the wall, and head north of the manor to trigger another cutscene, where Lacey is tied up. The Killer will ask her the name of the vampyre who lives in South Misthalin, but players will be given a choice; none of options matter, so pick any (the correct answer is actually Count Check, but if you say it, the Killer will kill Lacey for you interfering). She will die and the Killer will leave players another note. Pick it up and read it. The note is:

READ:  Old School RuneScape How To Get Ornate Armor

It’s like music to my ears!
The glorious sounds, spelling out your fate!

The riddle refers to the piano found in the north-eastern corner of the manor (music). You must enter the room through the the damaged north eastern wall. The Killer wants you dead – play the notes D-E-A-D on the piano, and search it to find an emerald key. 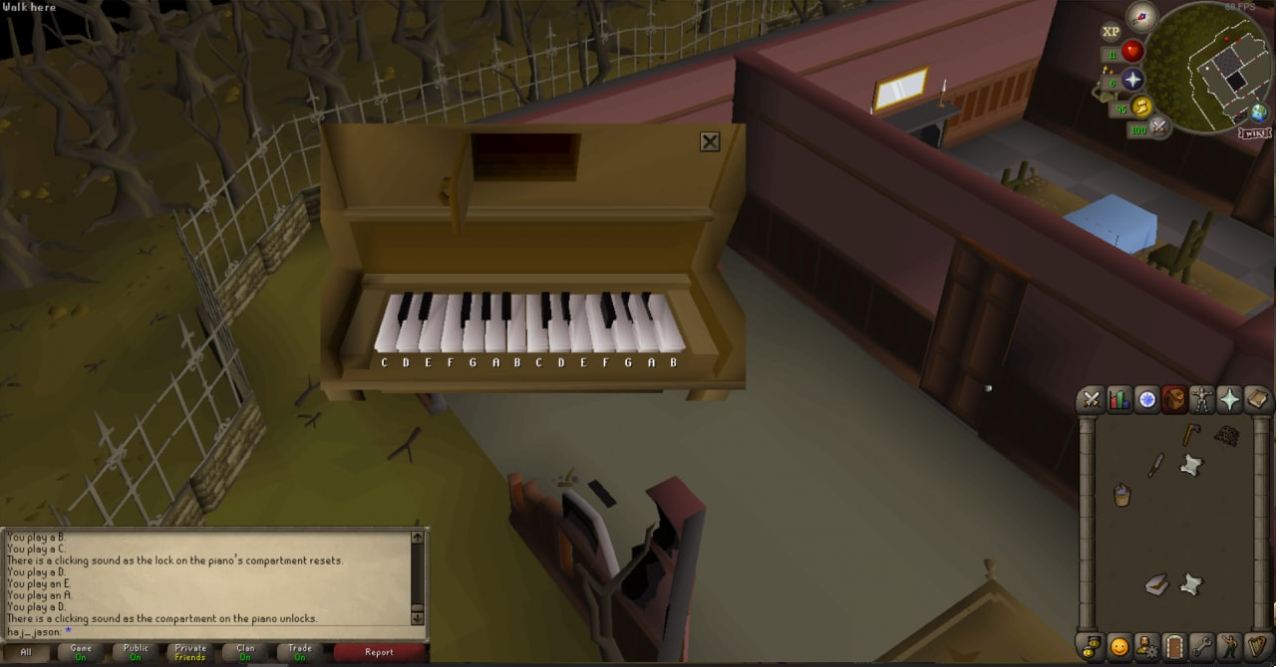 Return inside the manor by climbing the damaged east wall, and open the door with the emerald doorknob where the first note was found. Attempt to open the kitchen doors where Mandy is found, and another cutscene will occur where she is killed by the Killer. Once again, he will leave players a third note. Pick it up and read it. The note is: 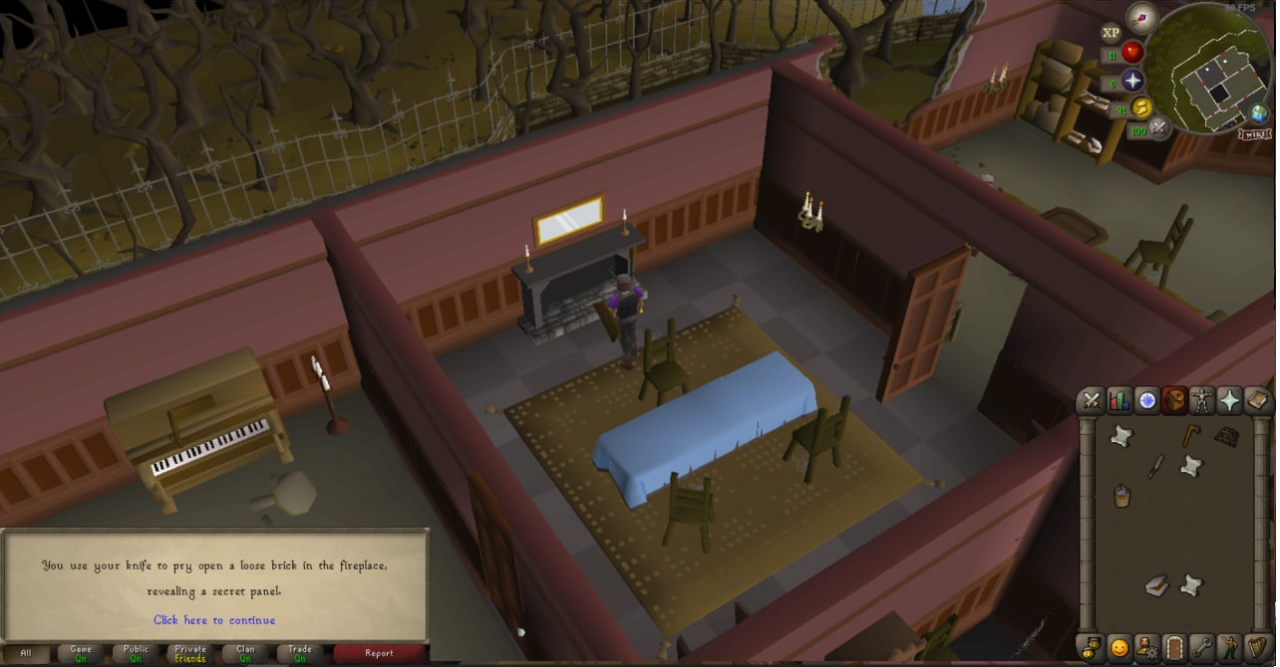 Hear at first these words.
Each murder you witness helplessly from start to end.
As you fail to solve the final letters of this quiz.
Razor sharp like a gemstone is the blade of my knife.
The last sound you hear will be your scream’s echo.
Heed that I will have the final word in this thriller. 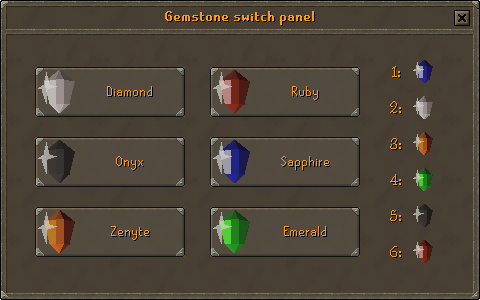 The riddle refers to the unlit fireplace in the eastern room (HEARTH). Use the knife on the unlit fireplace to reveal a panel of switches inside the hidden compartment. The correct solution corresponds to the final letter of each sentence. Therefore, to open the compartment, click the following in order (sdzeor): Sapphire – Diamond – Zenyte – Emerald – Onyx – Ruby. Search the fireplace once more to find a sapphire key.

Open the westernmost door, and a cutscene will occur where the player confronts the Killer.

After defeating the Killer, players will discover that the killer was Abigale all along! She complains about how adventurers always take all the glory from her when she tries to help others every year. However, another killer appears, and reveals himself as Abigale’s boyfriend, Hewey.

After basking in her glory, Hewey argues with her over her selfishness, and in her anger, she kills him. you must pick up the killer’s knife and attack Abigale (you can’t attack her with your own weapon). 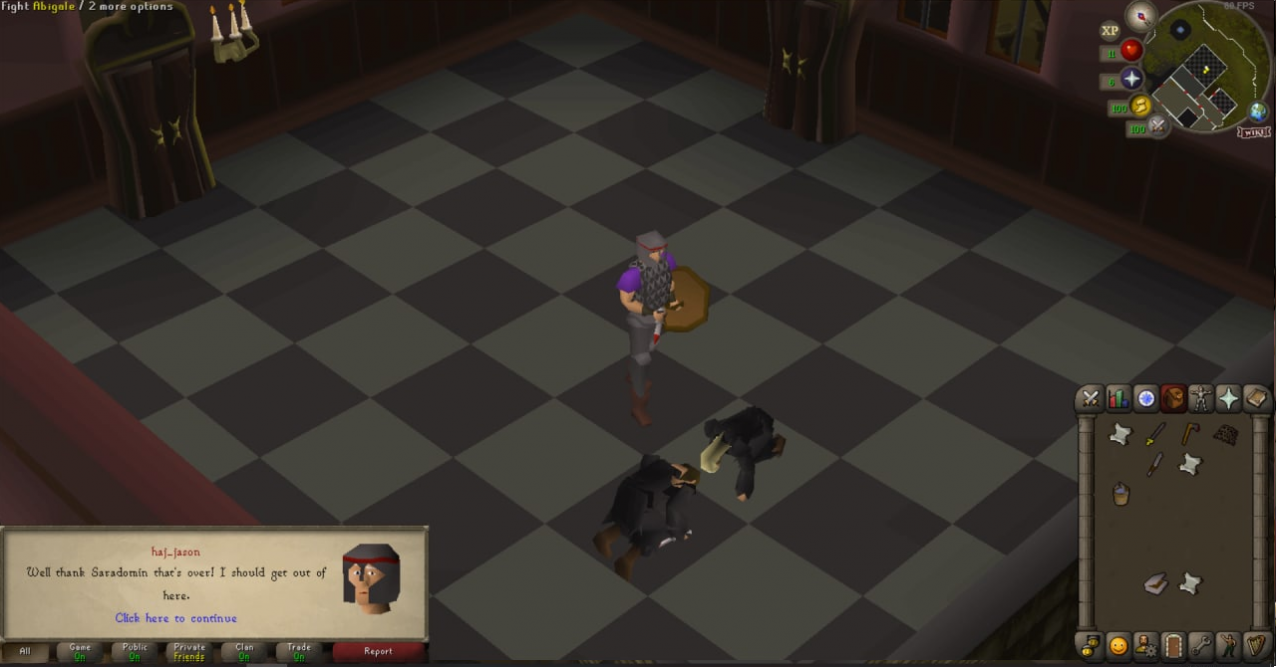 As you attempt to leave the manor, Abigale attempts to kill you, but is stopped by Mandy, who survived due to her having Dextrocardia, where her heart is located on the right side. 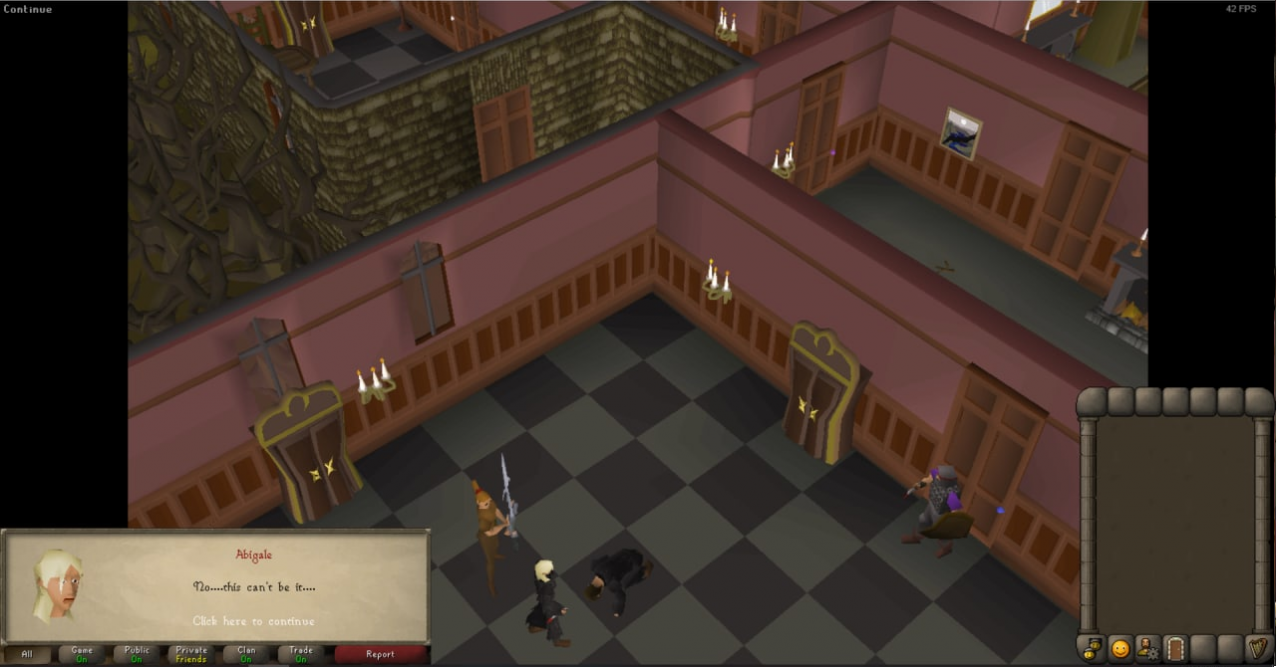 Speak to her outside the mansion. Quest complete!
(must have 3 free inventory slots to get your awards)

That’s all we are sharing today in Old School RuneScape Misthalin Mystery Quest Guide, if you have anything to add, please feel free to leave a comment below, and we’ll see you soon.
Credit to haj_jason