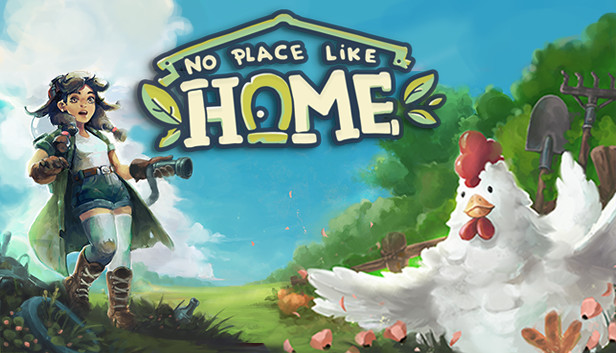 There are lots of recipes in No Place Like Home, and this guide will explainhow to find them in a very basic manner. All info based on version 0.16 of the game.

All recipes, that can be found are found in golden suitcases around the map.
Recipes in the game are merely for convenience. You can just put random ingredients into the kitchen and figure out the recipes for yourself. The amount of ingredients doesn’t matter for this, as long as all ingredients have more than necessary.

If you find a combination of items, that are actually a recipe, this recipe will unlock for you, as if you found it in a golden suitcase.

The following recipes are known from the start:

Recipes, currently not found in the game (can still be cooked, if ingredients are known):

The recipes below are listed in the order I found them.

Fries with Ketchup
Behind 1-box ramp next to waterfall

Fruit Salad
In a fenced area near on the shore, near the boat.

Poached Peach
On the shore, surrounded by rubber trash. Left of the damaged highway, that leads to the ocean.

Underground (including sections under Lonely Hills)

Sunny Side Up
Coming from the farm, directly left from the entrance
READ:  No Place Like Home Shop Listings Guide

Eggplant Fricassee
Behind 4 button puzzle door close to the entrance through the tunnel to the left of Harold’s house, which is behind a wooden 2-box ramp.

Baked Apple
Behind a timed puzzle door close to the waterfall entrance in the village.

Simple Salad
Behind the “box-cannon-maze”, going left from the basement entrance in the first section of the main village.

Scrambled Eggs with Truffle
In manhole maze next to fox-den entrance from the village.

Stuffed Pumpkin Deluxe
In robot “arena” next to last entrance in main village (next to shore entrance).

Truffle Surprise
In center of big you, that you enter from Lonely Hills entrance near the hole, visible on the other side of the river from Frank’s house.

Olivier Salad
In the first room after the transition from village to lonely hills underground, which is next to Napoleons original position (if he is already gone, look for destroyed robots). Room can originally only be accessed from same entrance as Truffle Surprise!

Peperonata
Right next to where you can find the bulbulator for the first time, so you can’t miss it.

Grilled Vegetables
Next to the only yellow tent in the funghi area (far to the right, at the end of a large trash field)

Ultimate Fruit Salad
From Rudy’s first location, go into the “herb” tunnel and finish the floating platform puzzle, if you haven’t done so. After it, you can unlock a door, with a new exit to the river, which has a large boat next to it. The suitcase is behind some rubber trash.

Ratatouile
In the first section of Frozen Peaks, in a small forest, that is locked behind a water-button door.
READ:  No Place Like Home Shop Listings Guide

Bread
In the first section of Frozen Peaks, in a fenced of area, where the button is inside. You get inside by dropping into it from the ledge above. The ledge is accessible to the right behind Jay’s house.

Veggie Juice
On a wooden ledge just next to the door to the village. You can get onto the ledge by opening the 4-button-puzzle fence door in the area you can access just to the left of the wooden ledge.

Borch
Up on a platform on the tree behind the cabin, just before the door to the second section of Frozen Peaks.

Potato Salad
Just before the door to the section section of Frozen Peaks, go to the right, where the second cabin is. To the right of the cabin, you can build a bridge with 5 boxes to reach the small peninsula, where the suitcase is located.

Omlette with Jam
In the cow farm cabin on the way to the fourth section in the second section of Frozen Peaks.

Pancakes
On a platform under the distant waterfall in the second section of Frozen Peaks. You need to repair a cable further up the hill, to activate the moving platform to reach it.

Garlic Bread
From the fast travel tunnel go right and keep right as much as you can. You will come to a “End of the Road” sign, with a boar near it. The suitcase is hidden under trash.

Ice Cream
From the fast travel tunnel go right and keep right, until you come across a 4-button puzzle door. The suitcase is behind it.

Apple Pie
Behind some glass trash in the area to the right, just after entering Frozen Peaks from the village.

Onion Rings
Behind a 3-timed-button door up the mountain to the left of the fast travel tunnel.

Cheese Fondue
In the cabin near the fast travel tunnel.

Veggie Lasagne
Behind and between some large shipping containers near Lilly in the third section of Frozen Peaks.

Cookie
Between the two large cooling towers in the third section of Frozen Peaks.

Eggplant Casserole
Hidden closely behind a giant mushroom next to some barrel scenery in the area opened by the “Even clearer Sky” quest. Close to the railroad support columns in the back of the area.

Poutine
In a small metal shed at the beginning of the last section of Frozen Peaks.

Omlette
In a larger metal shed at the beginning of the last section of Frozen Peaks.

Pumpkin Soup
On a ledge to the left, as you travel up the mountain to the radio tower in the last section of Frozen Peaks.

Cereal Breakfast
Next to a tree at the beginning of the swamp portion of the last section of Frozen Peaks.

That’s all we are sharing today in No Place Like Home Complete Cooking Recipes Guide, if you have anything to add, please feel free to leave a comment below, you can also read the original article here,  all the credits goes to the original author maelxp