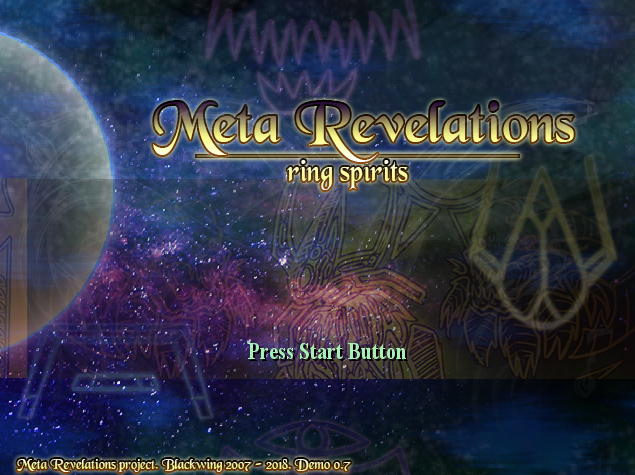 This guide describes how to obtain every Ultimate Weapon in Meta Revelations – Ring Spirits. There is a bit more involved besides just ‘completing the sidequest’ on its own. Since the Ultimate weapon quests contain important story points, consider this guide a spoiler. I will try to mark major spoilers where and when I can.

Introduction
Upon reaching Staza Plateau at the beginning of Chapter 5, three of the four Ultimate quests will unlock for each character, with Riley’s being a bit later on after you’ve scaled at least the second floor of the Control Spire. You’re clued on this because a guard in the shopping district will mention them by name. What we’re looking to obtain is the Bloodied Martyr, the Medusa Naga, the Penance Veridose and the Wyrmheart Blade.
Medusa Naga
The easiest of the weapons to obtain first is the Medusa Naga, Tay’s weapon, which starts when you talk to Viktor in the second floor of the apartments in Staza Plateau. He’ll mention of a severe Hex problem at his home in the Staza Gytera (Not to be confused with Gytera Savannah.) In order to get to this place, we’ll have to leave the city from the front entrance by going south of the shopping district. One word of warning however, is that Riley will come up with a reason not to participate in this fight, and you’ll be dealing with the next two bosses with only a party of three. It may be worth picking up extra revival or healing items to deal with both of them. Regardless, upon entering the house you’ll notice a monster blocking your path – another victim of the Hex.

The Biomoth possesses very high attack and defenses, and may kill Tay if she does not get the proper protections. Biomoth uses both Mind Control (Confuse) and Execution (Instant Death), so if you have any Ward Stars at this point, put this on your characters as appropriate. The best way to go for me in this situation is to use Wind of Raven on Tay while she has the Ward Star, so she can pick up and heal any characters instantly. Biomoth will deal a lot of damage, but will die very quickly due to low health, so keep up the damage (preferably magic damage on everyone but Allan) and it will go down in no time.

After defeating Biomoth, you’ll have a short battle with an enhanced Dark Seed. This is the same type of encounter you’d have encountered in Chapter 1 if you let the fight spin out a bit too long, and as such, it’s not very difficult. Instead of Nightmare Ghosts, we have Dire Ghosts, and instead of going active one at a time, they’re all active right from the start. If you think they can take it, you can summon either Agu or Phinaxio and use Flood/Incinerate to destroy all of them.

After dealing with both encounters, you’ll acquire an Aether Wing. This item is very important for completing the Medusa Naga later, so keep it in mind. After this, all that needs to be done now is to go back to Viktor. He will mention that it was another intentional attack, but notes that it likely wasn’t the C.M.D, referencing someone else may have been responsible. He’ll give you the Medusa before he leaves. (Note this is just the Medusa, not the Medusa Naga.)

Penance Veridose
This is the ultimate weapon for Allan, and actually has the most minimal amount of fighting to complete. In order to start the sidequest, simply revisit Shashar’s house to unlock a new cutscene between Shaena and Adon, where you will find out that Shaena is now cursed with a Hex affliction. Shashar mentions it’s not too late, but it will require two things to help her recover – a Direweed and finding the alchemist Lyria Sylvane as she was a former survivor of a Hex affliction.

The Direweed is easy to find, it is south of Staza Gytera. amongst a bunch of other non important herbs. It shouldn’t take too long to find. The more difficult part is Lyria Sylvane, but it’s likely you’ll run into her on your way back to Staza Plateau as she is now residing in the Ankitor Tunnels. She’ll talk a bit about the history of the place and then reveal to Allan that Agu was the miracle healer of Hex. All that is required is to merely ask him for it.

Since meeting with a physical Agu is impossible at the same time Allan is present, Lyria suggests to open up his Pocket Aether where he resides so they can talk to him in person. Upon meeting Agu however, you’ll learn that the miracle water isn’t so easily granted – each miracle erodes a part of himself, which is why Ellexial was summoned in the first place. Agu asks Allan to defeat Ellexial, so that he can be restored for the time being.

Ellexial doesn’t have much health, but there’s a good reason why. Only Allan will be able to damage him at all in the fight, so make sure only he is attacking it. Anyone else intervening will only heal it, so instead give Allan as many of your buffs as possible. Ellexial will use a pool of moves similar to Agu, so be weary of the effects. Once he’s dead, you’ll be given the Penance.

After this battle, Agu will grant you the water and you’ll be able to return it to Shaena. Once you do so, you’ll be able to go to Shion and upgrade the weapon to the Penance Veridose. You won’t be able to upgrade it until you’ve at least returned to Shaena to heal her.

Bloodied Martyr
This is the main weapon for Zephyr which can only be obtained through going back to Gost in the Elvenbow Deepwoods, that can be accessed through flying to Orta Mountain. Gost will mention the layout of the shrine of the rings has changed because of an enigma that appeared called the “Palisade”. This sidequest has the more battles than the other quests due to also requiring a new dungeon be completed, so bear that in mind.

You’ll have to obtain shaped gemstone Insignias on the way, and place them at marked points in order to proceed. After dodging all the arrow traps, you’ll meet up with Adena and learn her secret, thanks to the Palisade activating it. Because of this, we’ll be fighting the Crestlich Avatar – this is the small Crestlich people were talking about in Elvenbow.

Unlike the Adena fight earlier in the game, this fight is actually winnable. The same rules apply however, that physical attacks will mean nearly nothing thanks to the armour. Use as much magic as you can; the summons are actually very useful in this fight and be weary that she can sometimes one shot party members. She’ll heal to any Noir based damage, but is very weak to Shiro damage, so Light is another ability that can be used to its full potential.

After defeating the Avatar, it will free from Adena, allowing her to explain her situation, but before anything else can happen, our old friend Wind appears, stealing away the Palisade with a special magic. What purpose he has for this remains to be unknown.

After this, merely speak to Gost, and you’ll be able to craft the Bloodied Martyr at Shion.

Wyrmheart Blade
Probably the last weapon you’ll obtain. You’re clued in the story to go for this weapon, and I highly suggest you do; as chaining it with Shadow Sword and Dragon Rage is incredibly powerful. It will not allow Riley to freely use his Cardinal Power, that requires another two floors of the Control Spire to be completed first.

Kiara will inform you to look for a place in Jashej. If you bought the rope from Utopica (And if you haven’t you will need it now) you can use to to explore the holes in the west Jashej unnamed cavern. You’ll find a doorway you couldn’t open before, but interacting with it now after completing all 5 trials will now give you access. This is one of the most difficult dungeons in the game, with a slew of bosses potentially more dangerous than the final dungeon.

This dragon graveyard is filled with very strong encounters and five bosses total. You’ll have to quell each dragon rage before you can proceed onwards. Upon reaching the blue ‘magical’ portion of the dungeon, you have an optional puzzle you can do to make all the dragons peaceful.

If you manage to reach the end, you’ll meet with Nirvantir; the legendary Crown Dragon – who is also the father of Riley Wrean.

Do not use Strike at all in this fight. Any attempts to stun him will allow him to deal an extra 1,000 damage to all party members, so if some are underleveled, they will instantly die. Nivantir’s attack is also very, very high, Ember is recommended to reduce his damage. When you get the first chance, combine Eden’s lower defense effect with Dragon Rage/Shadow Sword, as this will be your main means of damage throughout the fight. Summons will likely die very quickly, so don’t bother with them.
While the Hex Dragon is very tanky, I don’t recommend using him here either since you will be locked into autoattacks for the next five turns.
When you eventually defeat him, you’ll obtain the Dracowyrm blade, plus a Heart Scale. Once you do this, you’ll have to find Shion.

Upgrading the Weapons / Finding Shion
Once you’ve done finding all the weapons, you’ll need to find Shion. Shion is the legendary blacksmith Zerab mentioned (Shion clues you in on this when you first meet him in the Tomb of the Sword.) He’s out in the Gytera Savannah, so you may want to use Tay’s ability to fly close to there. Once you reach the Savannah, there is a special requirement to encounter him. If you simply go north of Gytera Savannah, you won’t find anything; so instead, look for a tree surrounded by an Agnisus shaped grass formation and head north. Instead of being thrust into a dead end, you’ll find Shion’s home. From now on, keep this place in mind. You’ll need to go back here when you have the weapons and material, plus 1000 Kina. You can use the items you’ve collected, plus 1000 Kina to create each ultimate weapon.

If you’ve managed to create them all, congratulations!