For Loop Hero players. this is a guide covering how to summon this boss and details on how to get the best chance to beat it, let’s check it out.

So you want to learn how to summon and get a few pointers on how to beat it?
This just might be the guide for you then, however there are a few things I should go over:-I have not yet beaten this boss, everything in this guide has only been put from interpretation and analysis of the enemies and patterns of the fight.

-This guide includes spoilers on not only how to summon the boss, but also what abilities they have to use against you. If you wish to find out more about this secret boss on your own, this guide is not for you.

-Loop hero is still an early game and everything is subject to change, the version that this guide was made in is v1.012

-how am i supposed to know the genders of these characters

I won’t go too much into detail about how to summon this boss but I will do a quick summary.

This boss is summoned by having 6 or more different cards that have area effects touch a single tile, this will start to make blue particles come from that tile.
Once you see those particles, use an oblivion on that tile which will then spawn the boss on that tile.
Here are some examples of cards that can be used to summon the boss:

THERANDOM is one of the four enemies that are a part of this boss, and should be one of the first ones that you should focus on fighting, due to his high damage output, however there are ways to lower his damage output.
Here is all of his abilities (there is also an image present and will be for all enemy sections): 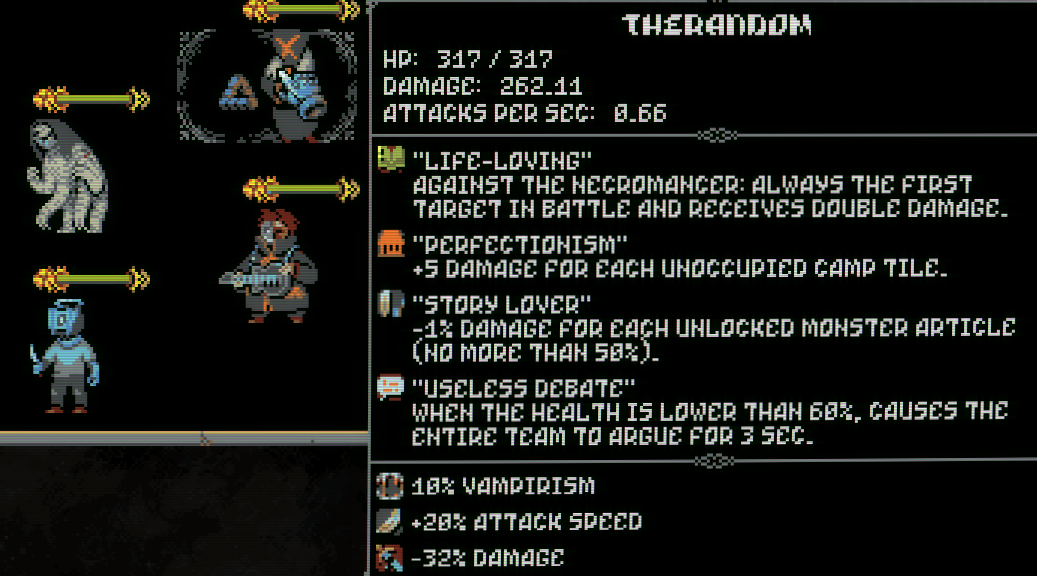 “Useless Debate”
When health is lower than 60%, causes the entire team to argue for 3 seconds

Occupy as many spaces in your camp as you possibly can

Unlock as many monster articles as you can (up to 50)

Targeting THERANDOM first can help because of the “Useless debate” ability

The DECEIVER is likely one of the toughest one from the four enemies to face in this boss, due to his ever-increasing health. However, similar to THERANDOM, he has a few ways to reduce his insane health, which can be seen in his abilities listed below: 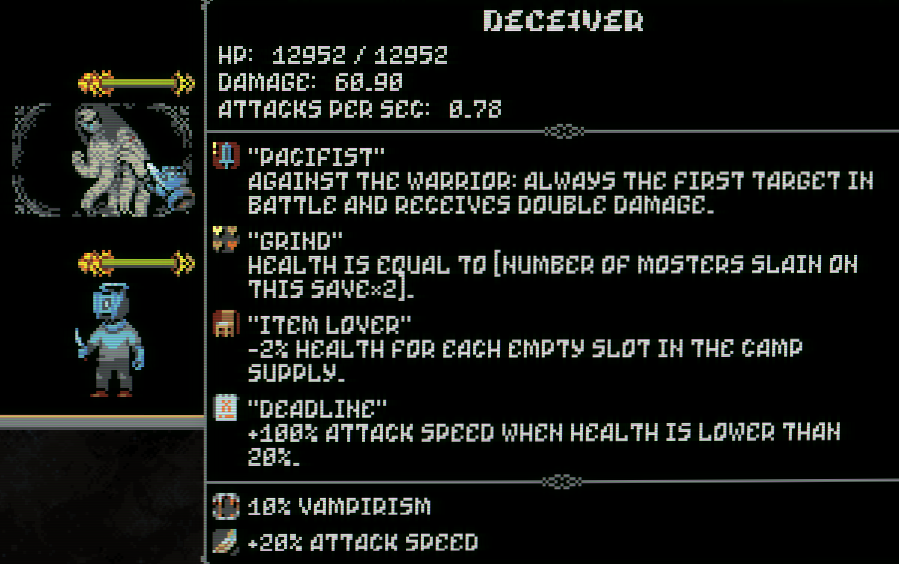 “Pacifist”
Against the warrior: always the first target in battle and receives double damage.”Grind”
Health is equal to [Number of monsters slain on this save x2]

Notes:
Use warrior to kill the DECEIVER easier

Using a smaller or even fresh save file can help because of the “Grind” ability, or un-equip useless items in your supply 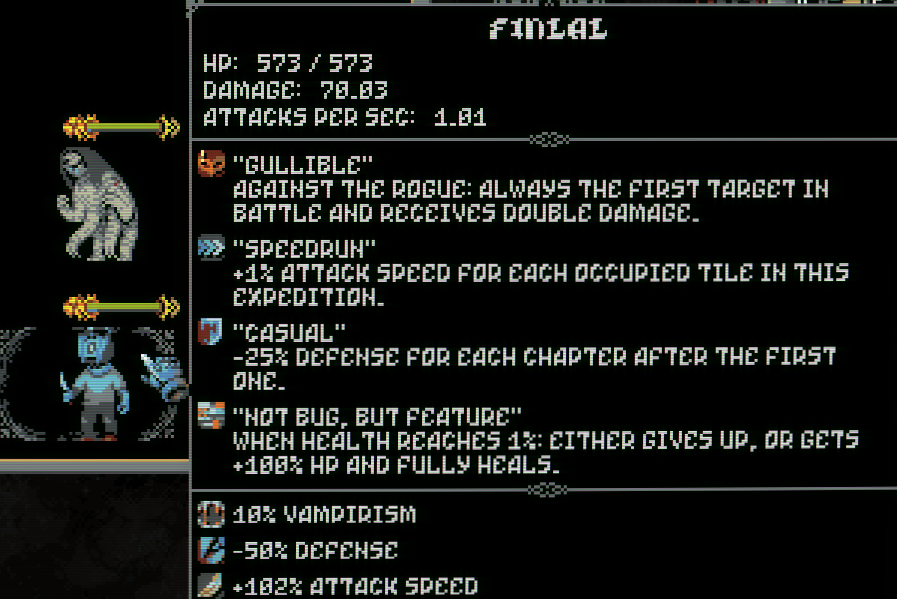 “Gullible”
Against the rogue: always the first target in battle and receives double damage”Speedrun”
+1% attack speed for each occupied tile in this expedition
READ:  Loop Hero How to Modify Game Speed

“Not Bug, But Feature”
When health reaches 1%, either gives up or gets +100% hp and fully heals

Notes:
Use the rogue to kill FINLAL easier

Killing FINLAL might serve to be quite difficult due to the “Not Bug, But Feature” ability

BLINCH might serve to be one of the tankiest enemies in comparison to the rest of the team because of his high evasion on high loops and because he will always be the second target after you beat the hero-specific enemy. However, his damage output can easily be so low it can barely touch you with one simple trick (this trick will be covered in spoiler text because it might be fun to figure it out during the fight)
Anyways, here are the abilities to BLINCH: 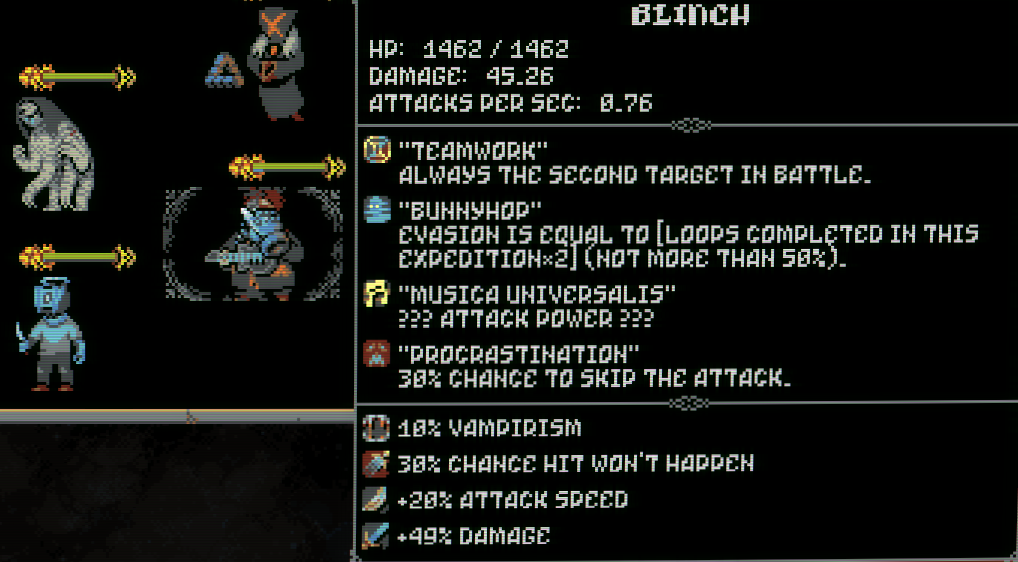 “Musica Universalis”
??? Attack power ???
(This ability provides no information other than the fact that
his attack power scales in some way (Scroll down to notes to see the hidden
effect))

“Procrastination”
30% chance to skip the attack

Notes:
BLINCH will always be the second target in battle, however his damage output
(can easily) be extremely low. Try to get as much DPS as possible against
BLINCH.

“Bunnyhop” gives another reason to try to fight this boss as soon as you
are ready to.

“Musica Universalis”
This ability’s secret is the master volume in the game’s settings (yellow slider)
The higher the volume, the more damage he does (between -75% to +75%)

BLINCH in general does not do that much damage and is mainly there to stall
you from letting you attack the other “team members” if you can, try getting
as much DPS as you can against BLINCH.

This section is essentially what to think about and what to focus on when and before fighting this boss, which includes planning and how to go about the fight:

Depending on what hero you pick, you will attack a different target. The necromancer might be the most beneficial from this fact as THERANDOM should be considered a priority target unless you manage to reduce his damage output to a tolerable amount

Using a fresh save might prove to be useful to reduce the health that the DECEIVER has. Or, if you don’t want to go to a fresh save; you can play as the warrior or unequip some of your supply items to counter the DECEIVER

FINLAL benefits from taking your time with the game. Try to rush the boss as soon as you have the correct cards and gear to kill them off.

BLINCH’s goal is to slow you down as much as possible, by gaining evasion for each loop that you complete and by being the second target in battle. It may be beneficial to have offensive gear ready when you kill your hero specific enemy, then switch back to offensive/defensive after he is dead. Also make sure to change your master volume to 0% to reduce the damage he deals by -75%, and after he’s dead you can jam to the oddly familiar music all you want

Unlike normal bosses, the battlefield gains the effects from roadside tiles that grant those effects (blood grove, vampire mansion, etc.) which should also be used to your advantage. This also makes vampire mansion quite bad to use to spawn this boss due to the given 10% vampirism to all enemies (a vampire wont spawn though)

That’s all we are sharing today in Loop Hero Information About the 4-Team Secret Boss, if you have anything to add, please feel free to leave a comment below, and we’ll see you soon.
Credit to turdle1won