For Loop Hero players, this guide provides some thoughts of clearing chapter 4 with Rogue and Warrior, let’s check it out now.

Edit: At the first this was a Rogue guide, but I tried the same method with Warrior, it work perfectly…LOL, so I mix them together, the core idea is the same.

Rogue is fun with its unique loot mechanic, with the default dual-wielding weapon, he has high damage output and can be even stronger by triggering critical hits.
The evade stat are tempting and the first thought I have was – “A strong Rogue evade and crits everything!” – by dumdum

Reality was cruel, I struggled with Rogue in the early game which is Chapter 1, 2, 3, and it made me think that Rogue is unplayable, I can’t even get pass the 2nd boss, it’s impossible!

So I tried… for some time, and with combo, and would like to share my thoughts and method with you all!

I believe that many of us have encounter this problem that you are outnumbered when fighting boss 2 and 3, so we use another job, the Necromancer to clear the boss.

Boss 2 has those annoying mirror that will divert your damage, even at 250%+ Atk Spd you will have a hard time dps down these thing due to the exist of stamina bar. Without say that the summoned angel hit like a truck.
The same thing happen in boss 3 with those stupid dog that will be invincible and guarantee to crit.

I have the guide of Necromancer –

But once the mindset is up, is pretty hard to change as I deeply believe that Rogue and Warrior are impossible to deal with those boss until…

The life changing idea strike my mind when I was trying to stack max evade (which is impossible before boss 2) to clear, and hope that Rngesus will bless me with those evades.

I have the Rogue traits which is you get 75% chance to summon a Ratwolf pal to aid you in battle, when I was fighting boss 2, with my pal, I get to quickly dps down a quarter HP of the boss, but once my pal get killed, I am back to the old ones that I could not break those mirror fast enough.

It was at this moment, I realize that I have made a big mistake, why I am not using the outpost card that allow a soldier to aid us?

It was the mind set of Necromancer that are limiting me, because the outpost card deal all AOE damage to the Necromancer so I have that card sealed. But now, I had found my key to success!

The Key of Success

Outpost, this card will has a ally soldier to help you in battle in exchange of all yellow and above rarity gear.

Yes, boss might gives good gear but you must first win the battle, and to obtain high rarity gear, there is another card that will spawn treasure chest.

The main idea is to set up the camp with Outpost + Bloody Grove and than lay back down enjoy the game.

You want to have 2 Outpost beside your Camp and a Bloody Grove. Make sure your Camp is in both of their range! 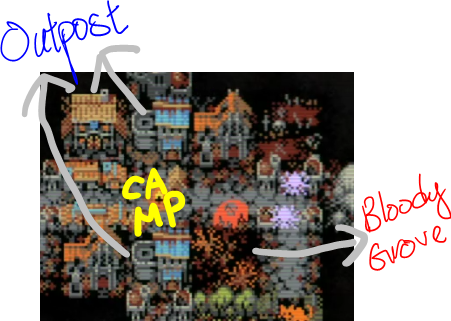 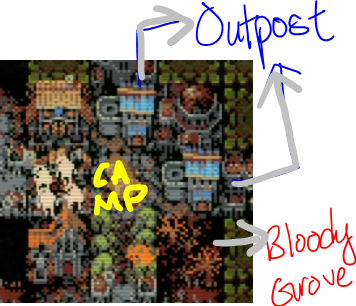 Killing Boss with my pal! 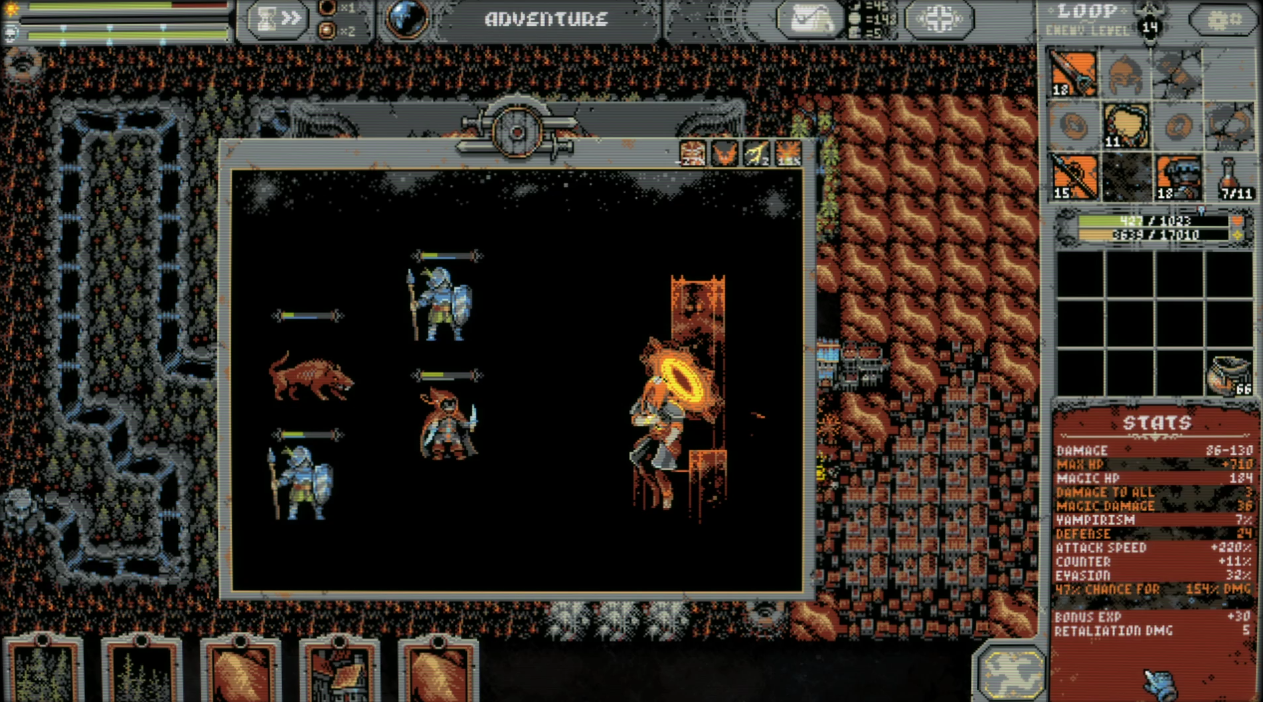 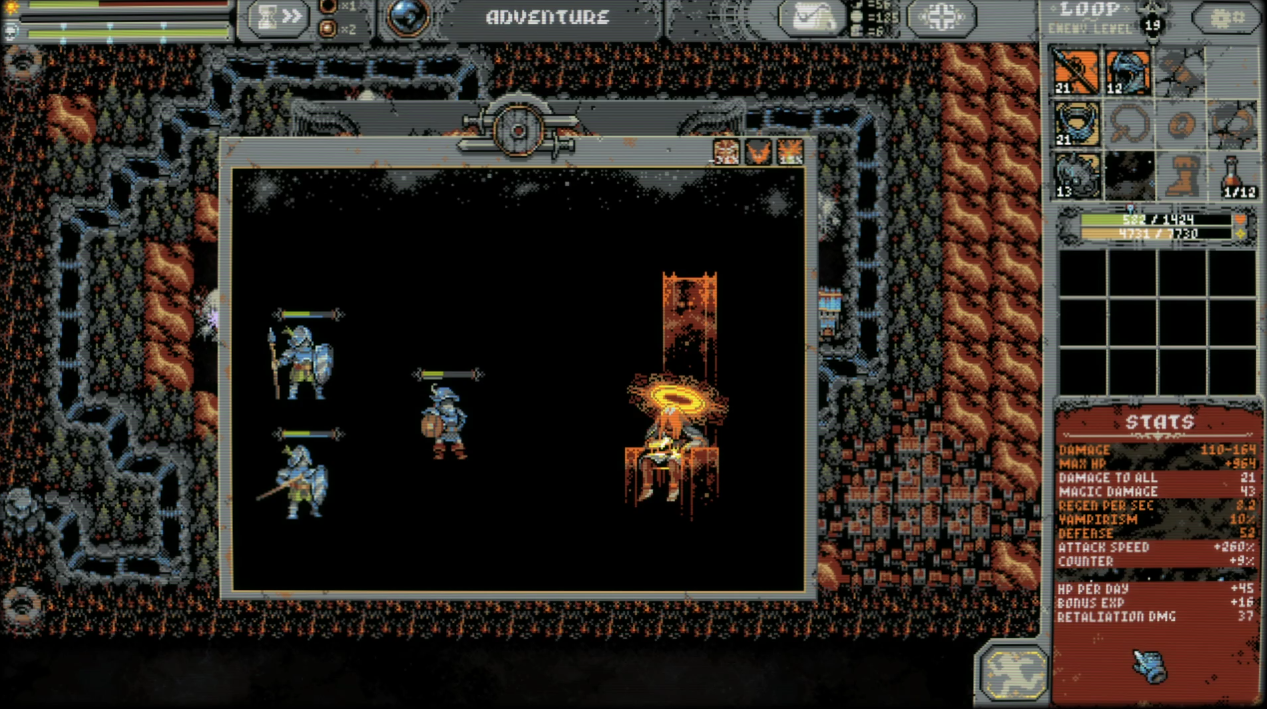 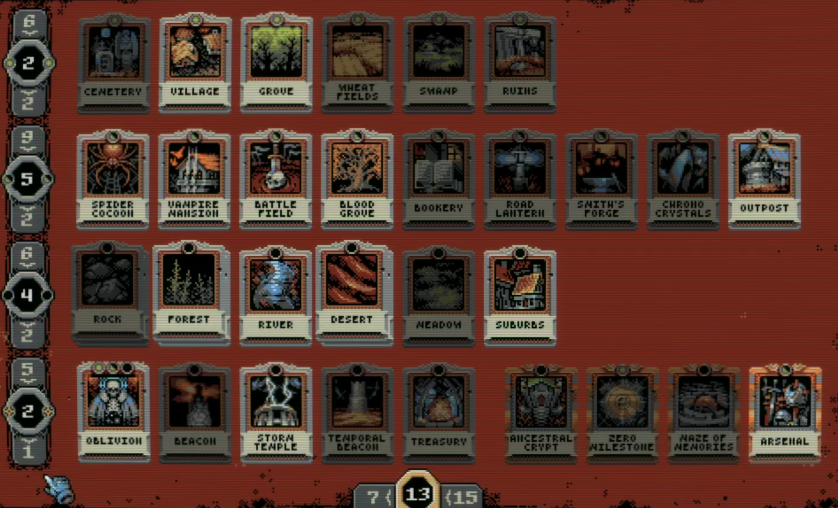 Village
If allowed, I won’t even add this card to the deck but it require at least 2, so this is a must. Some might argue that Cemetery but I personally want to reduce the risk of failing the run, skeleton hit hard!
And the second reason is pair with Vampire Mansion you get a mass mob that is great for finding the cards you need!IMPORTANT: Make sure to use it in range of your Watchtower(base building that will provide archery support beside camp)! At the early game, you are weak, so get some help!

Spider Cocoon
Spiders are weak! Super weak! and they spawn everyday! They are the best mob to let you cycle your hand to get those card!

Battle Field
Spawn a Treasure Chest after a loop, this is the 2 main income if your good gear, you want to avoid overlapping to spawn blood cloth, as I said, lower the risk of failing run!

Blood Grove
Sorry that I wrote Bloody Grove in the pic.
It kills everything include those God if they are lower than 15% HP in its range! You can combine 2 Blood Grove(Next to each other) to have Hungry Grove that has 20% HP kill range, but it will also damage your hero!IMPORTANT: Blood Grove spawn a super strong monster that gives excellent gear, so be aware, you want to have no other monster spawn in its range otherwise it might just accidentally ruin your run!

Vampire Mansion
Spawn Vampire in its range. You can place it beside your Camp to avoid spawing the Lich Temple and with Village to quickly fight 4 Ghouls for more cards!

Outpost
The Star, remember to place it beside the Camp to aid you in the boss fight, you can as well as place them at those U-shape to provide support when you kill those mass spider.
P.S. Spiders gives ♥♥♥♥♥♥ gear, you want the cards only, so there is no downside of using Outpost!

River
Just double the effect of LANDSCAPE, only landscape! Pair it with Sand Dunes will turn to Oasis which reduce the ATK SPD of enemy by 1 and hero by 0.5. Not recommend using Oasis here!

Desert
Only use Sand Dunes to reduce HP, both Warrior and Rogue has the armor slot which provide tons of HP so it’s a plus.

Suburbs
Maybe 10~20 is enough, remember to place it in a cross to have the middle one change into Town

Storm Temple
This will change the Forest/ Thickets in its row and lane to Burn Forest which +0.5 magic damage. I only use this once I am over 250% ATK SPD!

Arsenal Crypt
Another gear is just so sweet, especially for Rogue, the magic HP that act as temporary barrier is just so nice!

I would say that even white gear are quite useful for both melee class.
But I will pay attention and try to:Rogue:
Early game look for Atk Spd
Once you can constantly have more than 200% Atk Spd
I recommend Critical Chance, especially if you have the Blood Thunder skill which chance of trigger equal to Critical Chance.

Try not to focus on evade as shoes gives evade, best focus on other stats such as Magic Damage

I have no recommendation for Warrior, just choose the one with the highest stats, try not to focus too much in Vampirism.

There is the same Blood Lightning Traits for Warrior which is base on Vampirsm, honestly, this is kinda sucks because Rogue has a default 15% chance and can easily go beyond 50 but for Warrior, 30% of Vampirism might still be hard to achieve.

There is only 1 traits in both class that are extremely important, but you can still clear without them, just maybe a little more challenging

Rogue:
This is my trait when I face the last boss

I would say the most important will be the one stated in picture, this trait gives you higher rarity and higher level gear which offer insanely great stats in the current loop.
You can see that in my End Game picture, I am at loop 13 but my gear are at lv18 with high rarity.
I will argue that this skill is the most important for Rogue class.

The second and third for Rogue are 1 survival traits, and 1 attack traits

This traits will protect you from being slap by the boss, for example the 2 angel that hit hard, and the 2 hound that crits, it provide a complete evade for 2 seconds which will always(hopefully) dodge the 2nd hit.

This attack traits is base on Critical chance which can be easily stack and go more than 50%, I don’t see any other option of not choosing it.

Other traits such as +1 max HP for trophy gain, are good to have, just make your own choice.

Warrior:
I am quite bad luck with my Warrior run as I din’t get the most important traits, which is the one that give you 65% HP Armor when you start a new Loop.
This is by far the BEST trait for Warrior, I would say that if I have this traits, I wound’t even need to use my Resurrection chance, I can wipe the boss pretty easy.

Other skill, erm, the Blood lighting that are great for Rogue are ♥♥♥♥♥♥ here, it depends on Vampirism which is awfully hard to stack.

Before the early game is the planning stage, You can see it in my Necromancer guide –

But different with Necromancer that I only use thickets, I will use Forest in here and to burn them in the late game, so remember to there will be a row and lane for Forest!At first you want to stack your ATK SPD and set up your Camp with Outpost and Blood Grove ASAP, especially for Camp, do not enter boss fight when you are not ready!

But once you are ready, get to the boss ASAP!1

My Rogue run before boss 1 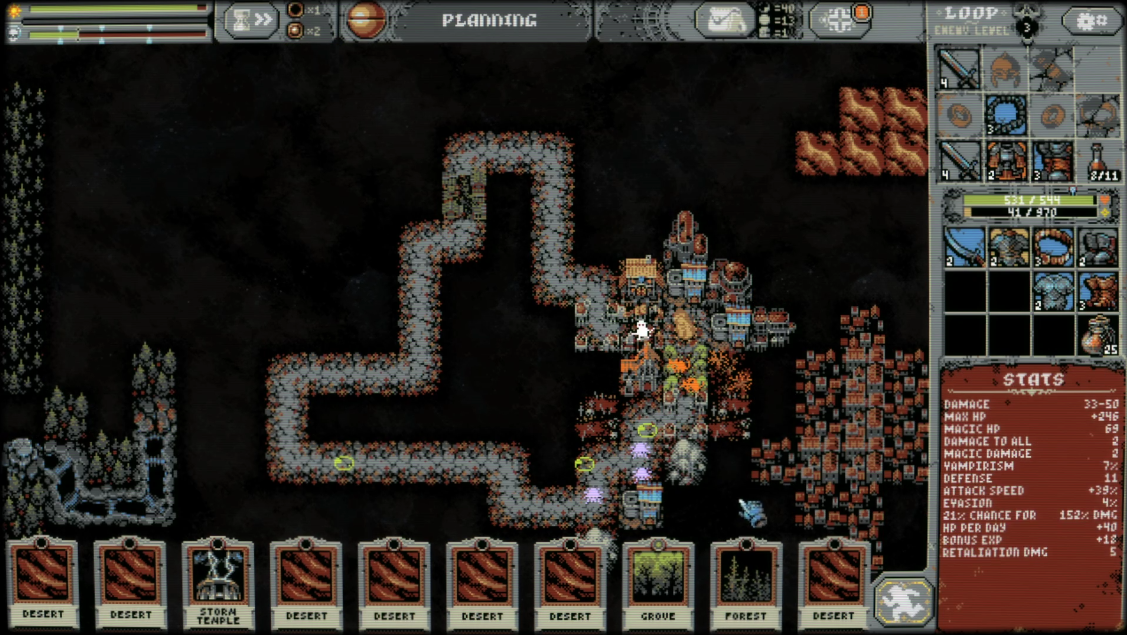 My Warrior run before boss1 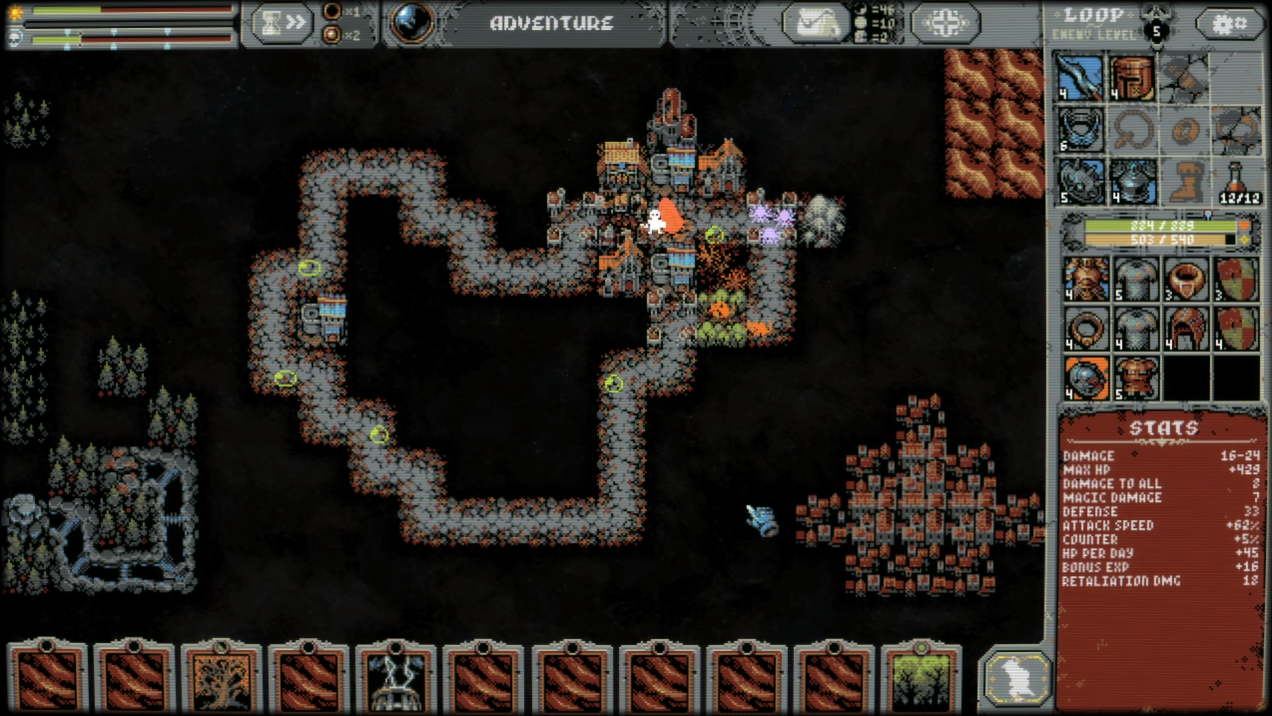 This is where you aim for 250%+ Atk Spd and build more Spider Cocoon, nothing else

My Rogue run before Boss 2 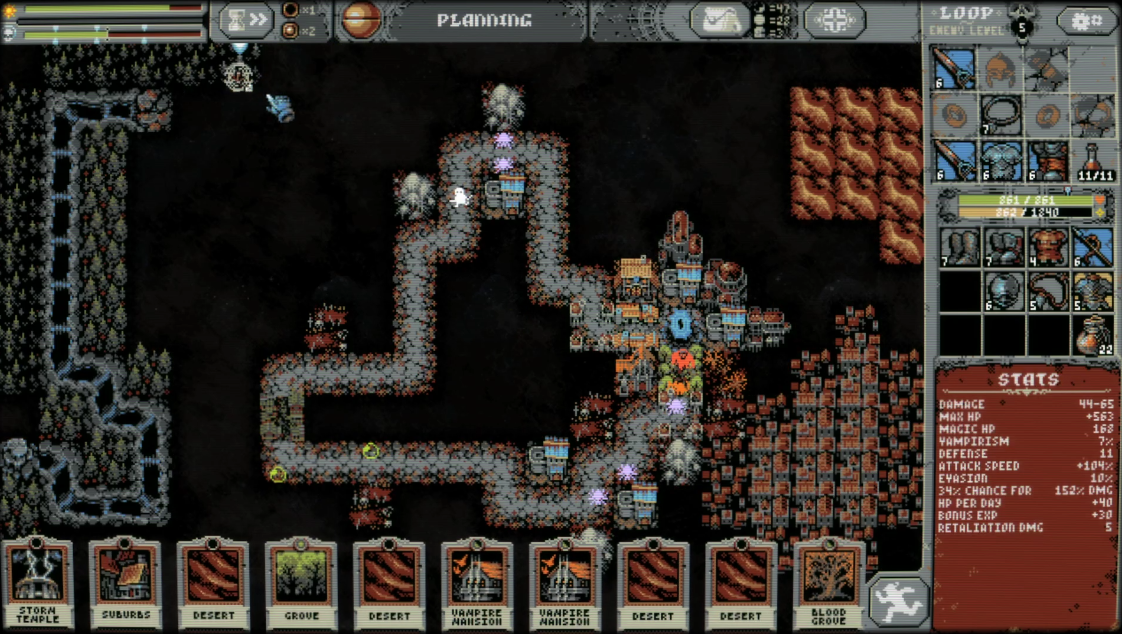 My Rogue run before Boss 3 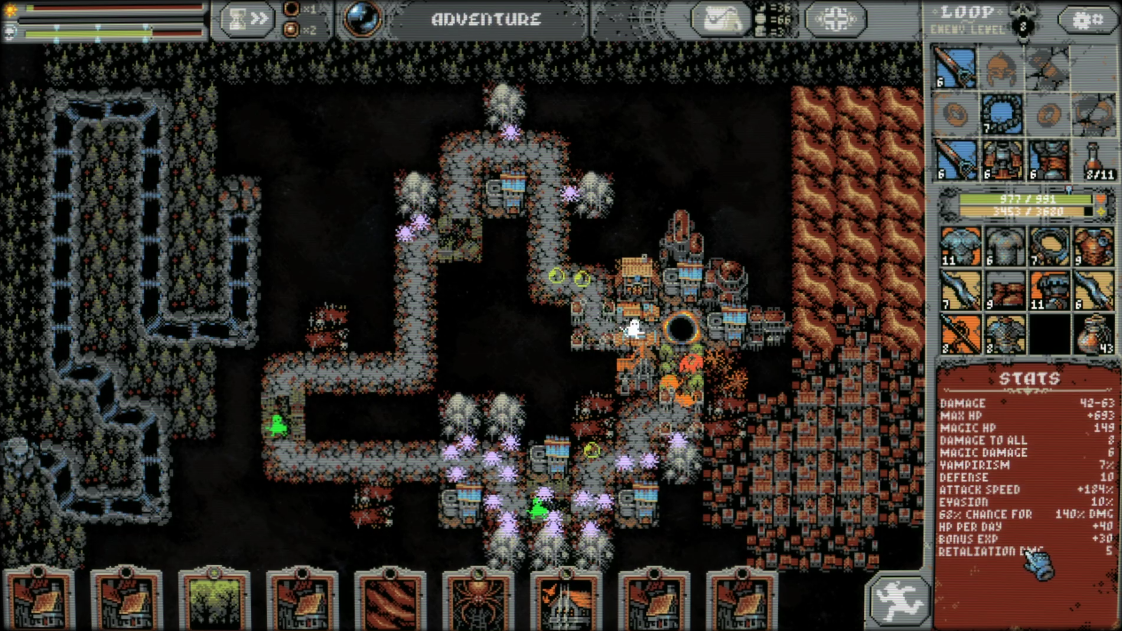 My Warrior run before Boss 2 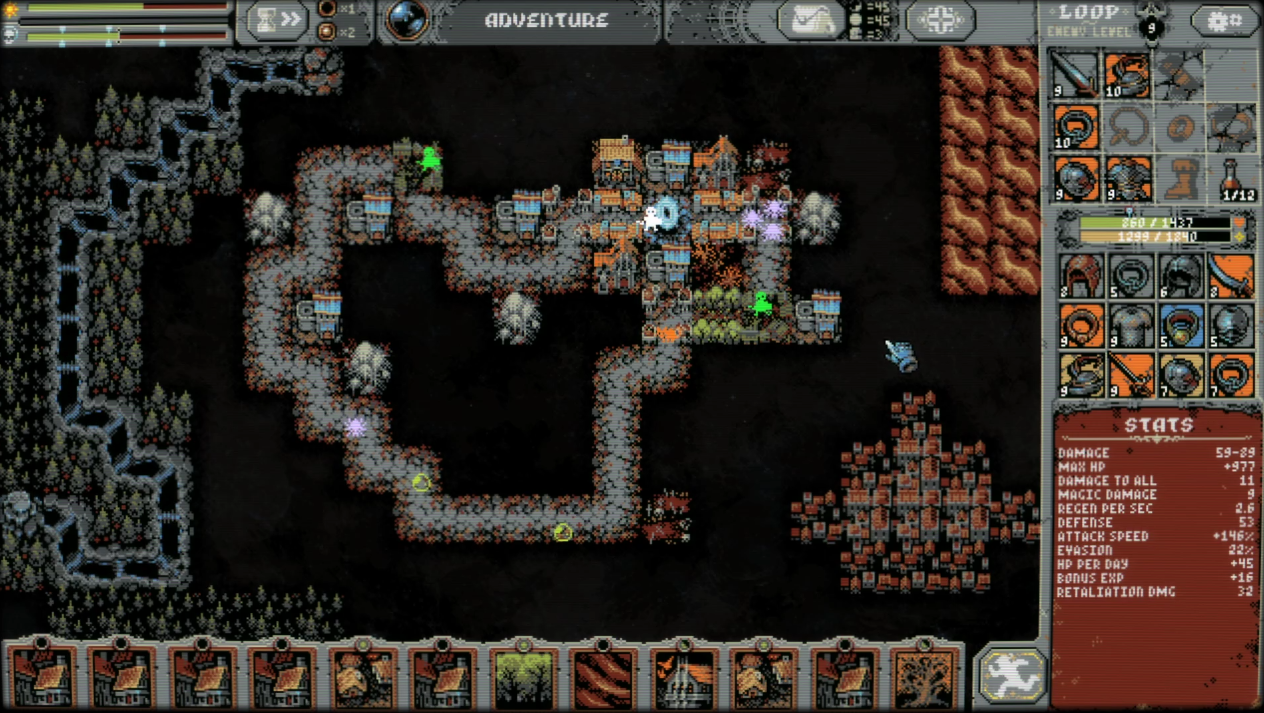 My Warrior run before Boss 3

Congrats, you have get through the hardest part, now just continue and place more Thickets, Sand Dunes or Burn Forest,
If you are a Rogue, try to aim for:
200%+ Atk Spd
50%+ Crit Chance
30%+ EvadeThis will be a piece of cake for you!

My Rogue run before last boss 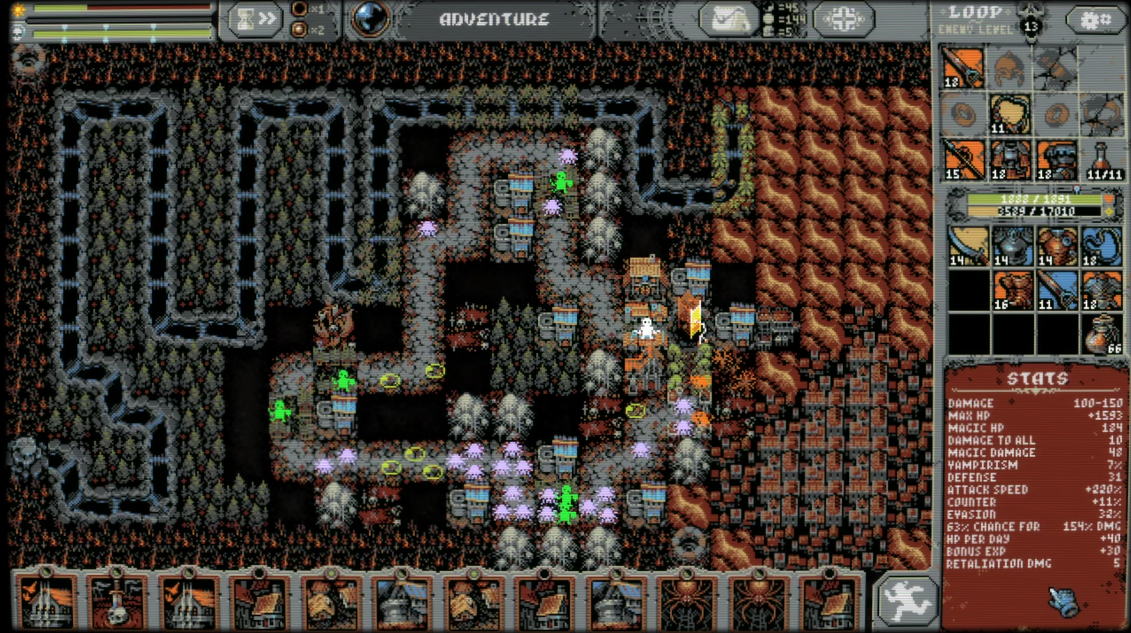 My Warrior run before last boss 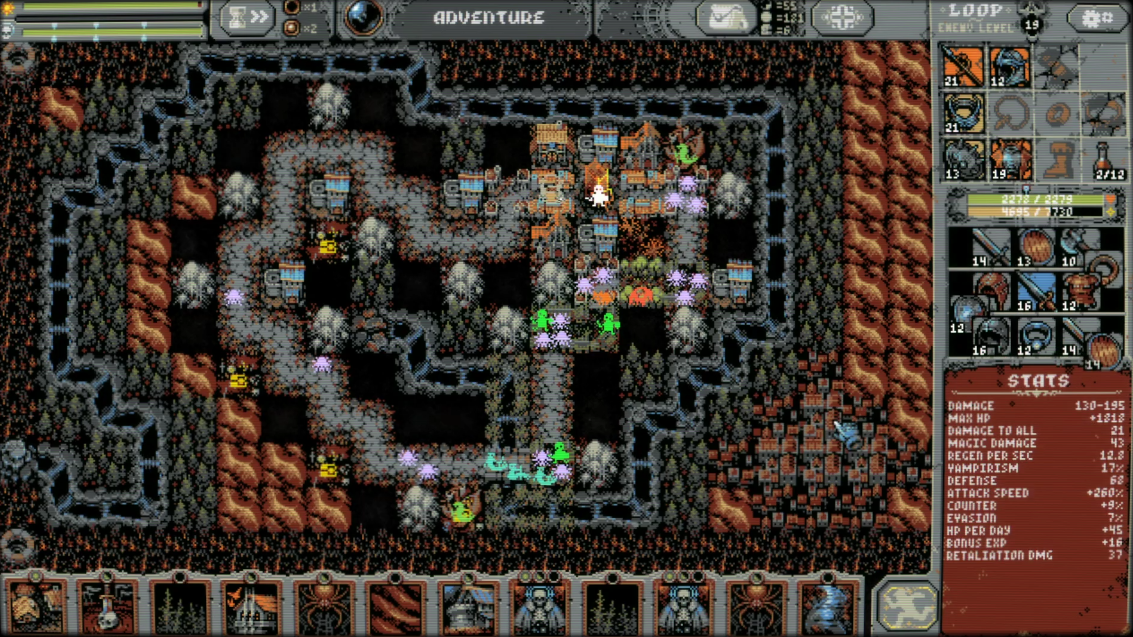 That’s all we are sharing today in Loop Hero How to Clear Act IV with Rogue and Warrior, if you have anything to add, please feel free to leave a comment below, and we’ll see you soon.
Credit to Mr.77