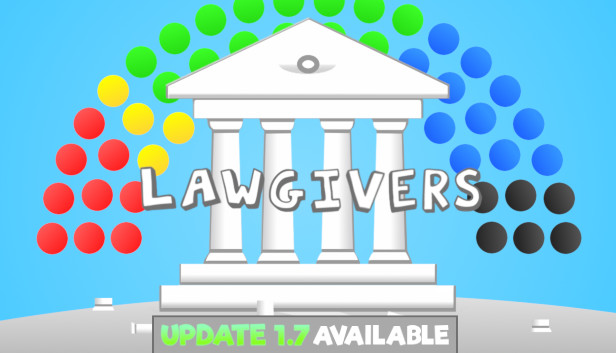 This guide will try to explain some of the gameplay aspects of the game. I will try and explain the basics of the game after what you learn from the tutorial. From what you learn here you should be able to play the game consistently well and understand how and why you may want to pass laws and not pass others.

The Patch 1.7 is now available on Steam now.

So let’s start with going through what information we have about the country and your party. If you click the top left of the screen on the icons and we open up the country tab. 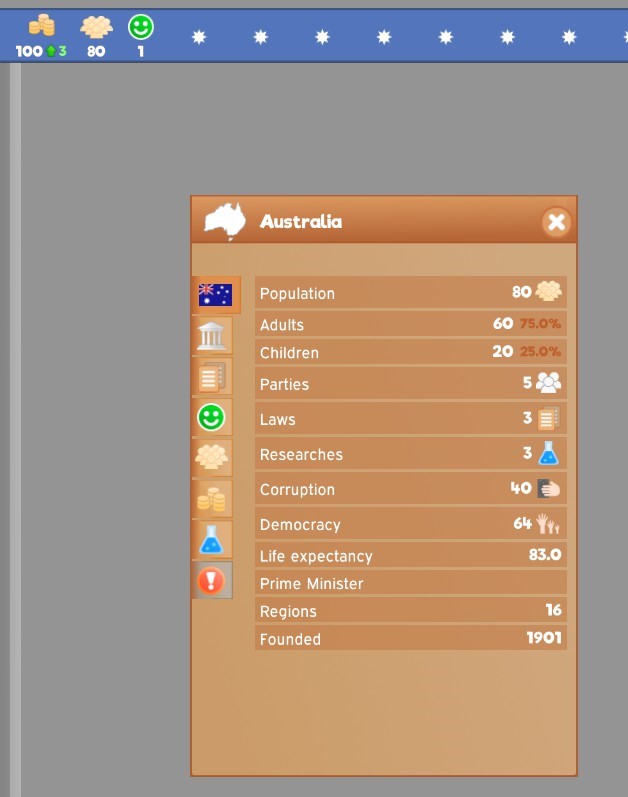 Here we have some information about the country in general. These are occasionally important but I won’t focus on them too much. 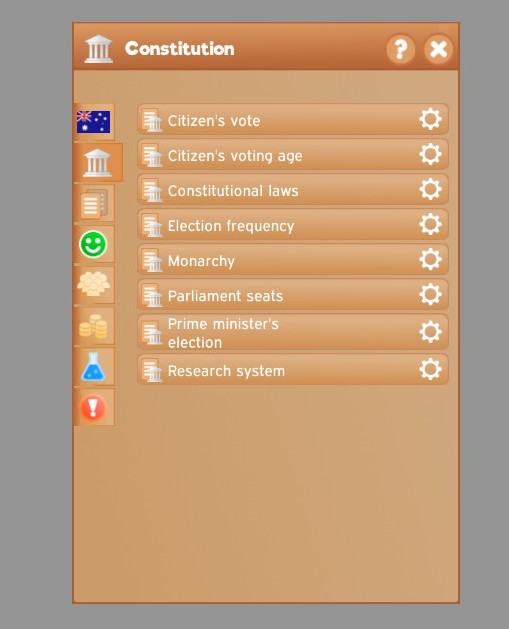 You can click on any of these to see the current laws in the constitution. This is especially useful when other parties are trying to pass laws to amend/remove constitutional laws.

Then we have laws. 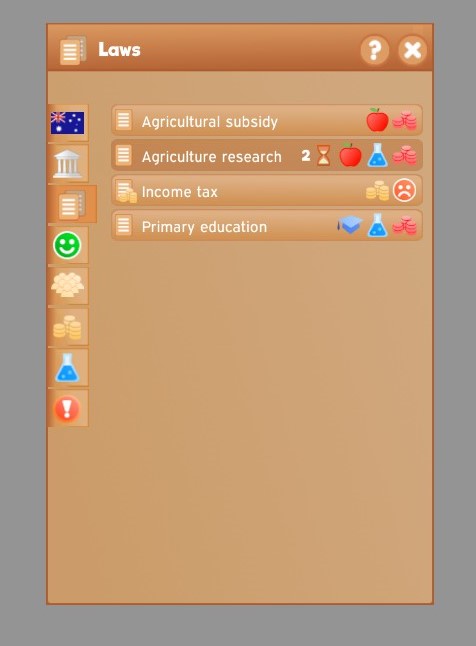 Very similar to the constitution tab except these are not constitutional laws. Next to each of these (and some constitutional laws) are icons which display what areas theses laws effect. It also shows laws not yet in effect such as the Agriculture research law which will be in effect in two turns. clicking on these laws shows the strength of the effect. I.e. a two next to the apple icon means it adds two food. 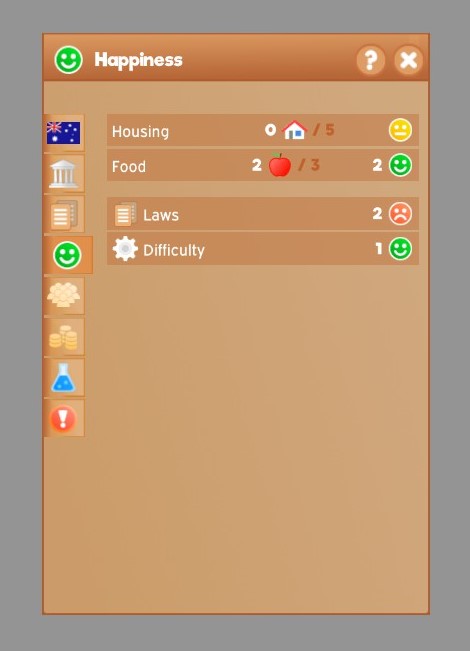 This is probably the most important tab. It shows how much happiness you have and where it comes from. The populace has needs and meeting these needs makes them happy. However giving them more than they need, say 4/3 food does not provide any more happiness. You unlock more needs by researching certain technologies and the amount of needs citizens want is dependent on the percent that hold certain ideologies.

Which brings us neatly onto the Population tab. 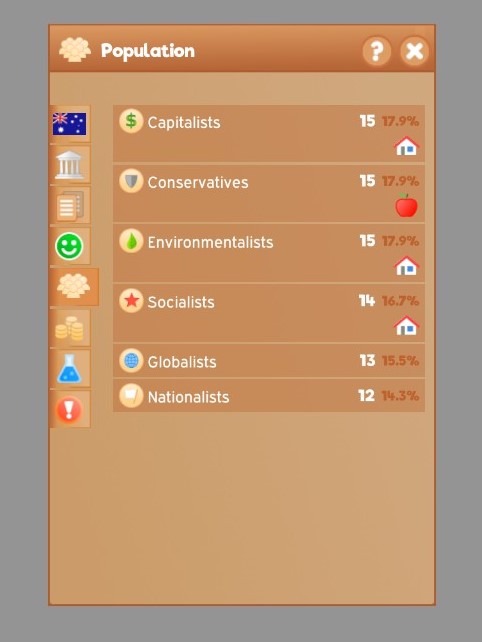 Here we can see the percentage of the population that hold certain ideologies. You can change the percentages by advocating/attacking ideologies in interviews (with the right technology unlocked). The higher the percentage that follow an ideology the more sway they have and the more needs that are important to them they will demand.

Now we have the budget tab. 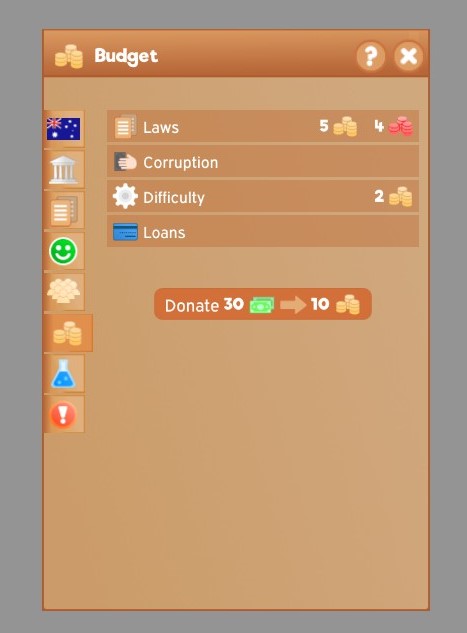 This shows how much money you make and where it all comes from and where it all goes. This is self explanatory, but just looking at the number in the top left corner gives you all the information you need. The first number is how much money you have, the second number after the arrow shows the change between turns. try keep both of these numbers positive to avoid bankruptcy, but temporarily going into a deficit is not necessarily a cause for concern as long as you can fix it in the long run.

Next we have the research tab. 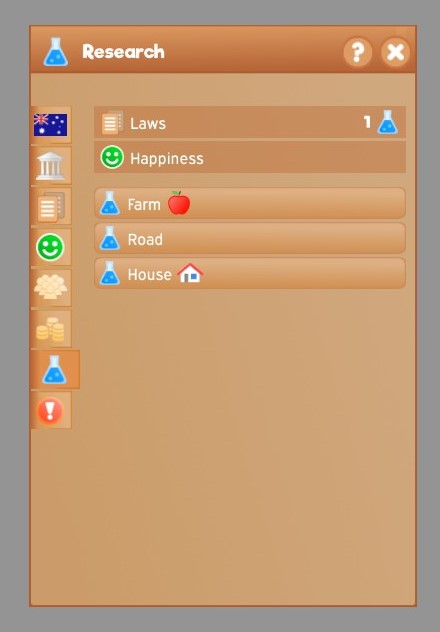 This shows you which researches you have as well as which needs for you populace you have unlocked. Clicking the researches will show you which laws you unlocked with them. We’ll discuss this more later in the research section.

Finally we have the events tab. 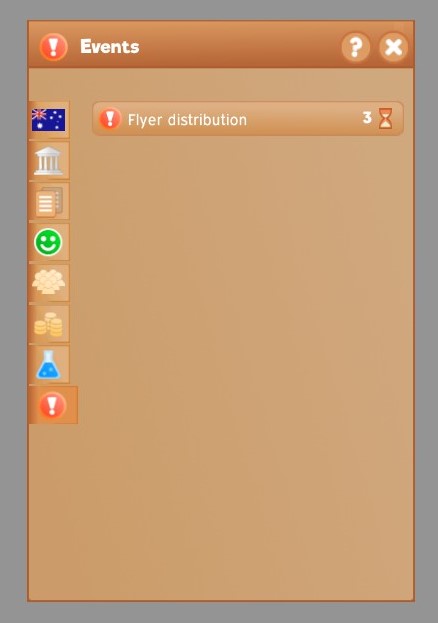 Events seem to appear randomly, some can be caused by the player such as distributing leaflets. Clicking these events shows the effect and how long these effects last.

Here is a list of laws in the bottom right that we can put to a vote:

Next to each of these laws we see what needs they effect,

We see the difference between these two laws in how they are votes on as well with public housing being a much closer vote whereas retirement homes being a landslide victory.

After a few turns waiting for these laws to be implemented we can see effect that these laws have on the happiness of the population by providing housing the the populace.

This part will be the shortest section.
Here we see one of the options in the research vote. It shows at the top what type of need it unlocks and what laws it unlocks. Some research unlocks poll questions and interview questions as well. This is the research which is chosen by the parliament.

After several turns and the research has finished it is unlocked with all the new laws and the new need as can be seen here.

With this information you should be able to pick laws which make the public happy choose research more strategically. By unlocking the right research you should be able to support your ideologies in interviews which, by fulfilling those needs your ideologies support that should transfer to more power in elections. If you’re particularly corrupt you may want to impose martial law (with the right research unlocked) and bribe any remaining politicians with black money to take full control of parliament.
Or use this information to make your population happy, your pick!
I hope this has cleared up some confusions about the game. Good luck playing!
By SadClaire