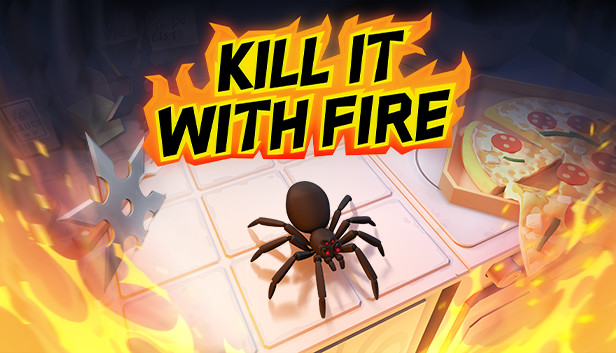 Kill It With Fire players, if you want to know more about spiders in the game, this guide will describe the statistics of all spiders and how to create them using snack flavors.

The Black Spider is very common in every level and can be found wherever you go. This spider takes two hits with a clipboard, and one hit with the frying pan (Which can be found in the level Domestic Duties). This is spider can also burn to death when set on fire by any fire weapon, as well as being one shot by most weapons in the game.

You can turn a spider into a normal one by feeding any type a Classing Cheddar Cheese Puff. This is an effective way of turning spiders into less dangerous ones. To get the Puffs, it is in one of the rooms on the map Close Encounters.

These Spiders first appear in the map First Contact.

Spiderling (All White And Small)

Unlike the Black Spider, these spiders are small and fast. They have very little health and are very weak (It has the same health as the Exploding Spider but that’s a later section). They are just as abundant as the normal Black Spider, but can also from Queen Spiders (Also a later section). Adding to the small health it can be one hit K.O.’ed by almost anything (Even the clipboard).

You cannot feed any type of cheese puff to make a spider into a Spiderling.

These Spiders first appear in the map Close Encounters

Queen spiders are big and as fast as a normal spider. They have more health and it takes 3 hits with a clipboard and 2 hits with a frying pan. It also will not fully burn to death when you set it on fire, so you will have to spray it twice. Along with having the most health of any spider in the game, the Queen Spider gives birth to 4 Spiderlings upon death. The easiest way of dealing with the Queen and Spiderlings is by spraying the Queen with fire, then spray it again after it’s not on fire anymore. When the Queen burns to death, the Spiderlings will pop out and start burning too, killing them. But then again, you could also feed a Classic Cheddar Cheese Puff to turn them into a normal spider, making them less dangerous and easier to kill.

A Queen Spider can be created by feeding any spider Royal Grape Puffs that can be found on the Map Paper Trail later in the game, in a vending machine in which you can smash it open and take them.

These Spiders first appear in the map Close Encounters.

Jumping spiders have the same stats as a normal spider. However, they can well, jump (It’s terrifying). There’s not much to say about these spiders but they can be scary sometimes when they jump at you from out of nowhere.

A Jumping spider can be created by giving any spider the Bouncy Chocolate flavor from the Cheese Puff bag. The bag can be found in the laundry room in the map Domestic Duties.

The Invisible spider also has the same stats as a normal spider, but is very transparent and you can hardly see it. A good way to lure them out is by leaving Invisible Ranch Cheese Puffs on the ground as bait. When the spiders eat them, their ability will temporarily deactivate, making them visible to the naked eye, in which you can unload all our your firepower on them.

An invisible spider can be created by feeding any spider Invisible Ranch Cheese Puffs, which can be found with the Bouncy Chocolate flavor in the laundry room on Domestic Duties.

This spider is first found in the map Domestic Duties.

Exploding spiders can also be killed in one hit just like a Spiderling, but are the same size and speed as a normal spider, and can explode upon death. This explosion is not able to hurt the player, but it can send object flying and kill other spiders in the blast radius (About a meter). This spider is also the only spider that is completely resistant to fire.

READ:  Kill It With Fire All Batteries & Upgrade Locations

An Exploding spider can be created by feeding any kind of spider the Spice Explosion flavor in the Cheese Puff bag. This bag can be found in the convenience store.

This spider first appears in the map Major Inconvenience.

Web spiders share the same stats as a normal spider, but can shoot webs that cover your screen, making it hard to aim at targets. A group of these spiders can be very annoying.

A Web spider can be created by feeding any spider a Sticky Lemon flavor Cheese Puff, which can be found in the barn on the map Barnstormer.

This spider is first seen in the map Garden of Evil.

This spider has the same stats as the normal spider but has a very unique ability. Every one of these devils act as necromancers, and raise their dead fellow spider brethren from the dead, reincarnating them as zombies (Another section). All a Radioactive spider has to do to revive a spider is walk past them. But fortunately, their bodies dissipate into nothing when they die, so they cannot be revived by others (Which would be very game breaking and annoying and i’ll explain why in the zombie spider section).

There is currently no way to turn a spider into a radioactive spider with Cheese Puffs.

This spider is first seen in the map Paper Trail.

Zombie spiders are what happen when you return spiders from the dead. A zombie spider is made when a Radioactive spider passes by a spider’s corpse. When a spider is revived, it is the same exact type of spider that it died as. For example, if you killed a Jumping spider and it was revived, it would be a zombie jumping spider. Web spider turns into Zombie Web spider, Queen spider turns into Zombie Queen spider, so on and so forth. As i mentioned in the Radioactive spider section, Radioactive and as well as zombies dissipate upon death. This is because Zombie and regular Radioactive spiders could revive each other for forever (Like a tag team).

There is no current way to turn a spider into a Zombie spider through Cheese Puffs.

Zombie spiders are first seen on the map Paper Trail in which you walk into the final room where there are a bunch of Radioactive spiders and spider corpses ready to be turned waiting for you.

Cockroaches? (Gross) *SPOILERS FOR THE END OF THE GAME*

A Cockroach can be killed in one hit and are in the last level called Consequences. After killing every last spider in sight with an atomic bomb, the town has been overrun by Cockroaches that survived the bomb (Cause they can survive the apocalypse apparently), hence the name consequences. Face what you have done and kill those Cockroaches.

You can’t turn anything into Cockroaches with Cheese Puffs (Why the heck would you?).

And then you get abducted by some random creatures in a spaceship that will probably be a DLC of some sort.

That’s all we are sharing today in Kill It With Fire All Spider Explained And How To Create Them, if there are anything you want to add please feel free to leave a comment below and we’ll see you soon.