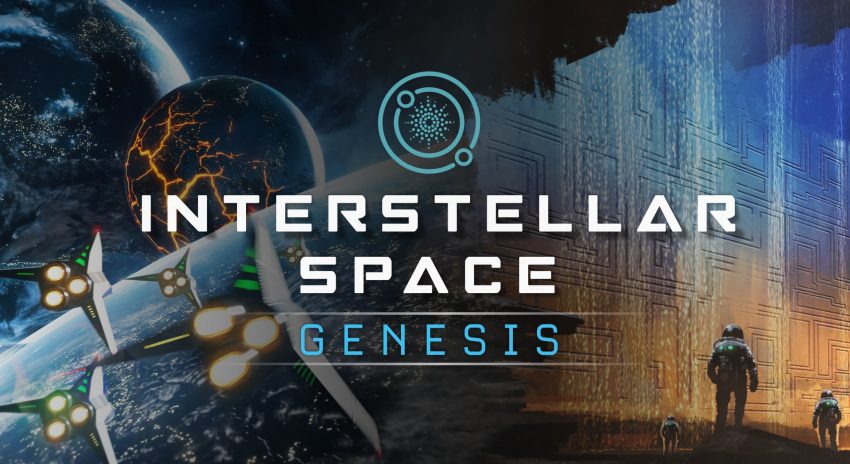 This guide is focused on how to accelerate early game growth. It is specifically intended to aid a new player in acclimating to the ISG universe. The guide is a sample walk-through of the first 65 turns, and illustrates how a new player can dramatically effect the pacing of the game.

ISG is a complex game, and it may take some time for some new players to understand all the nuances involved. While some players will pick it up quickly, other players may need a few hints in how to get the early game going. As I have a lot of hours with this gem, I thought I would put this together and try to help out some of those first time players.

My first suggestion is to start with an easy or normal setting, but what I’m going to show you below applies even at the harder settings, (for my own session I am on severe/emperor, and using a custom human race). My second suggestion is to relax and take it easy during the early game, there’s no rush and you will be quiet busy anyway.

Turn one
Three main choices await you on turn one, these are what to research, what to explore, and what to build (if anything)

My own choices below are partially based on where I spawned. As you see, I have chosen to start with a representative system(of Sol) and I want to see if HE3 is present on Jupiter. The only way to do that is to finish the final level of remote exploration. (at the start, the first two levels are completed in your home sector). I am also sending out my starting Frigates to nearby systems in range. The Frigates will only reveal if there are planets there but won’t reveal the Gravity, Richness, or specials, (if any). Still, by doing this, I have a better understanding of where to focus exploration once I’m done with the current sector

The big issue is what to build, and I can guarantee that the vast majority of first time players will go for a colony ship as their first project… not a good idea. First of all you will be scared when you see the completion time as reported on turn one, but more importantly, you already have a colony ship waiting to be used. Don’t rush, we won’t be colonizing anything for a few turns. In this game I decided to go with an outpost.

I went to the colony screen, made a slight adjustment to my production allocation from evenly split to 30% infra, 30% planetary engineering and 40% construction. I did this by switching from the triangle that allocates production on the colony screen to the bars instead (you did know you could do that yes?)

Now I could have decided to build nothing in the early turns and min maxed my production allocation instead, for example I could have set it all to infrastructure and gained a new level quickly thereby increasing production overall, but I want to show you something. See the screenshot? According to that it will take 65 turns to build that outpost. If you’re thinking WTF? Don’t. Watch as I bring that number down while also giving you some hints on how to expand quickly in the early game.

Oh, by the way, the tax sliders, research and culture, I haven’t touched them, leave them be for now, when you increase one, something else suffers, wait till you’re more familiar with the game before you start screwing around with these. 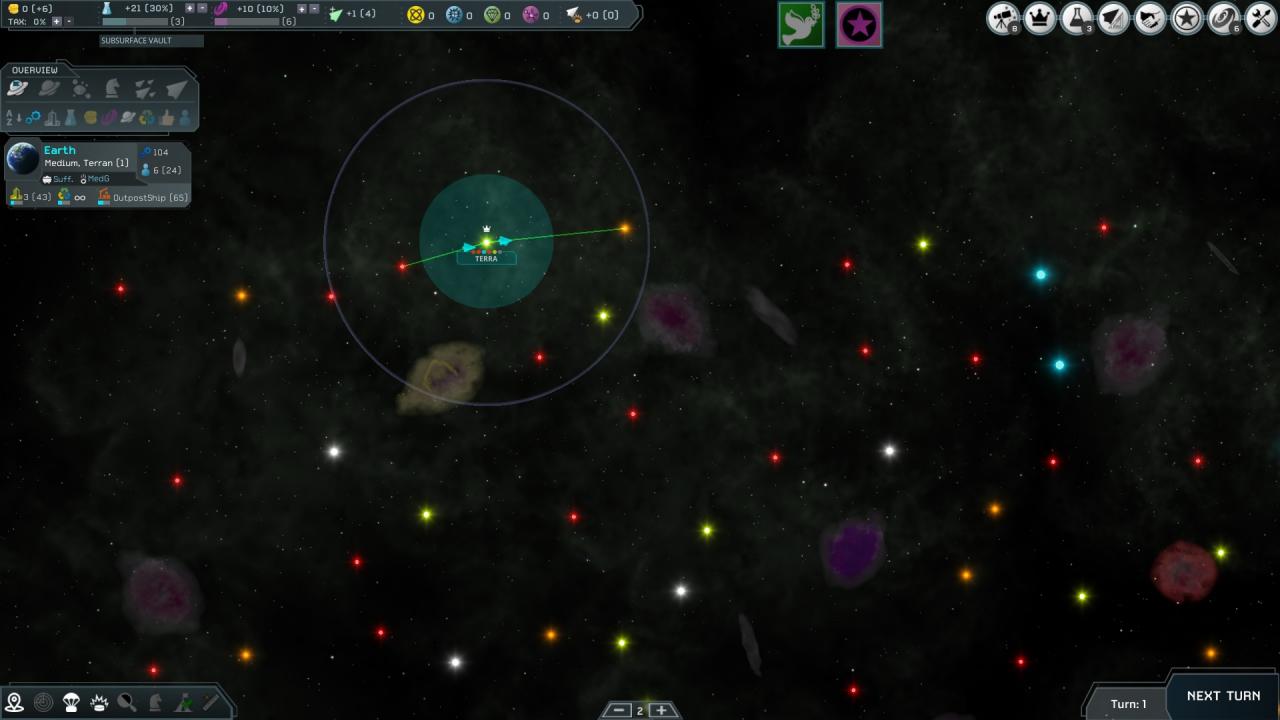 By turn five, I’ve already completed one research project, and selected a second, in this case asteroid mines and my Frigates have revealed some information on the nearby systems, I now know where to focus exploration and that I will soon need to research Swamp colonization based on their efforts.

More importantly, I have reached the first level-up in space culture. Here I was faced with some serious choices. I could choose between two advancements to aid exploration, (one giving extra range and the other allowing me to explore two sectors at once), but I decided this can wait. Another choice could have given me a second colony ship and also set a new colony’s starting population at 2 versus the default 1. This choice is extremely valuable… but I skipped it for now as I still have more exploring to do before I decide where to colonize (Your first colonies should be the best choices you can make, remember when I said not to rush things?) The other choice was between two free outpost ships or overmining which gives you a permanent plus 1 to construction per pop everywhere. 2 free outpost ships is nothing to sneeze at…but I have one under construction and if I take the two free ships I will exceed my support limits and possibly watch my treasury run dry as a result (nasty stuff happens if you run out of money)

So I chose over-mining which increased my base production. That means that the completion time for my outpost came down as well as the ETA of when my infrastructure level will rise…nice! All the while, I’ve been busy with decisions, researching, exploring, etc. This game isn’t just about clicking end turn and waiting for something to be built. 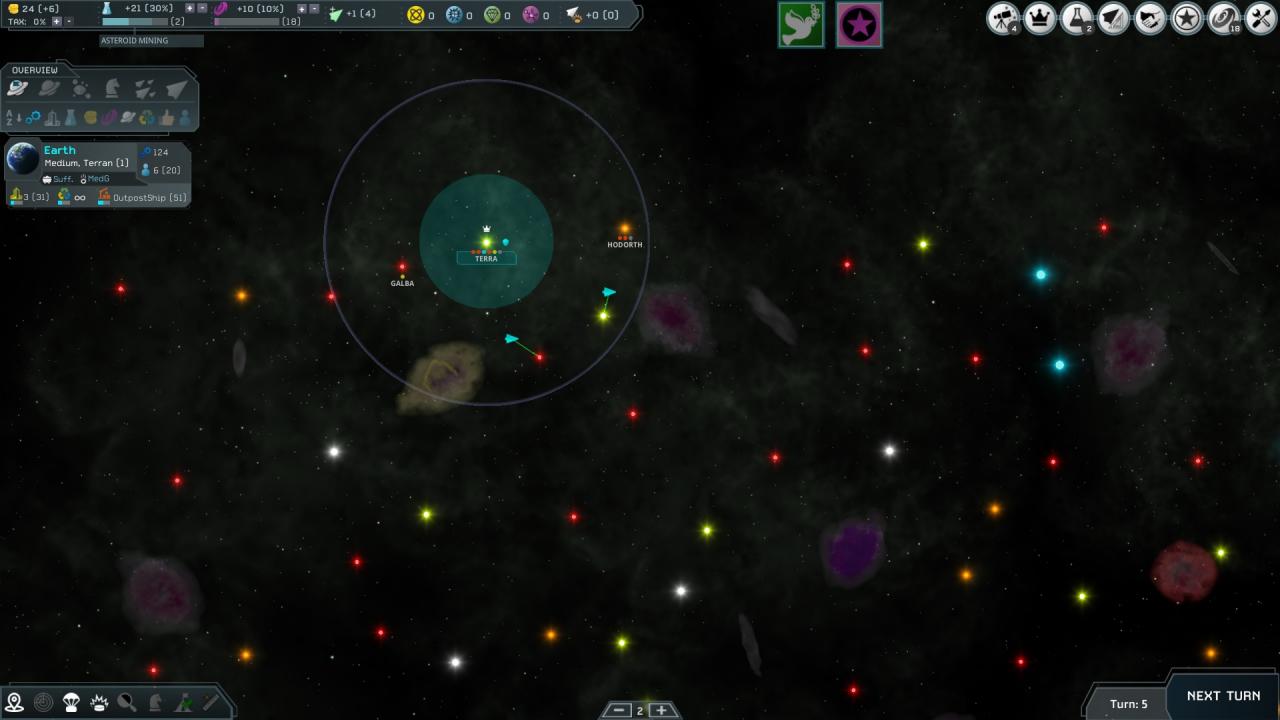 I followed up my research by exploring swamp and desert colonization, this was based on the findings of my Frigates. Soon, I received my second cultural advancement and chose the option which grants a free colony ship and sets the starting population on new colonies at two instead of one. Immediately I ordered my colony ships to set course for Oplaa and Hodworth. I am taking a risk here in colonizing worlds that are not fully explored, but I believe it is worth it. I also started researching Off world support as that tech grants a free support ship when concluded. Also, by not constructing any buildings early, I was able to accumulate cash and hire my first colony leader, he will appear on my HW soon and accelerate my industrial output even more. 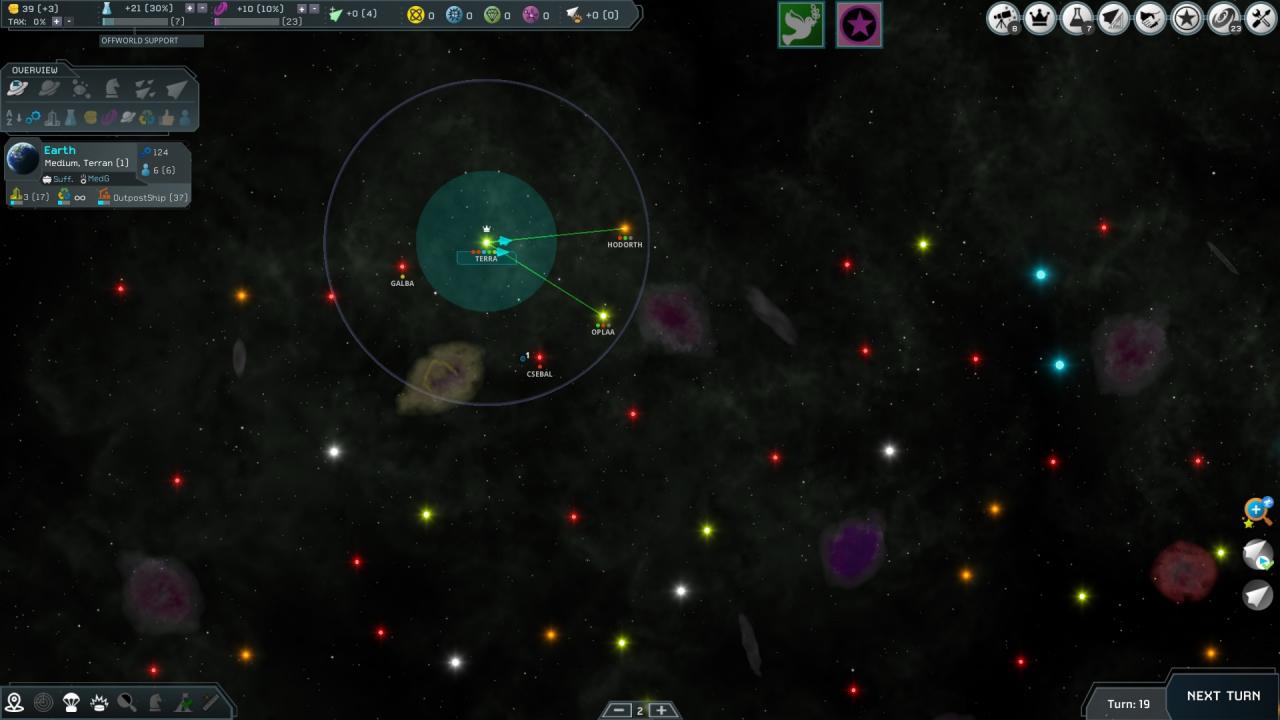 By turn 25 my population has grown and my free support ship is available. You can see that even though my new colonies are not producing anything, they are having a good impact on my research efforts and treasury.I also used their initial infrastructure to increase my Ship Support points, thus giving me a nice cushion in that regard. My HW now has the colony leader in place and my overall efforts have brought completion time on the outpost ship down considerably. 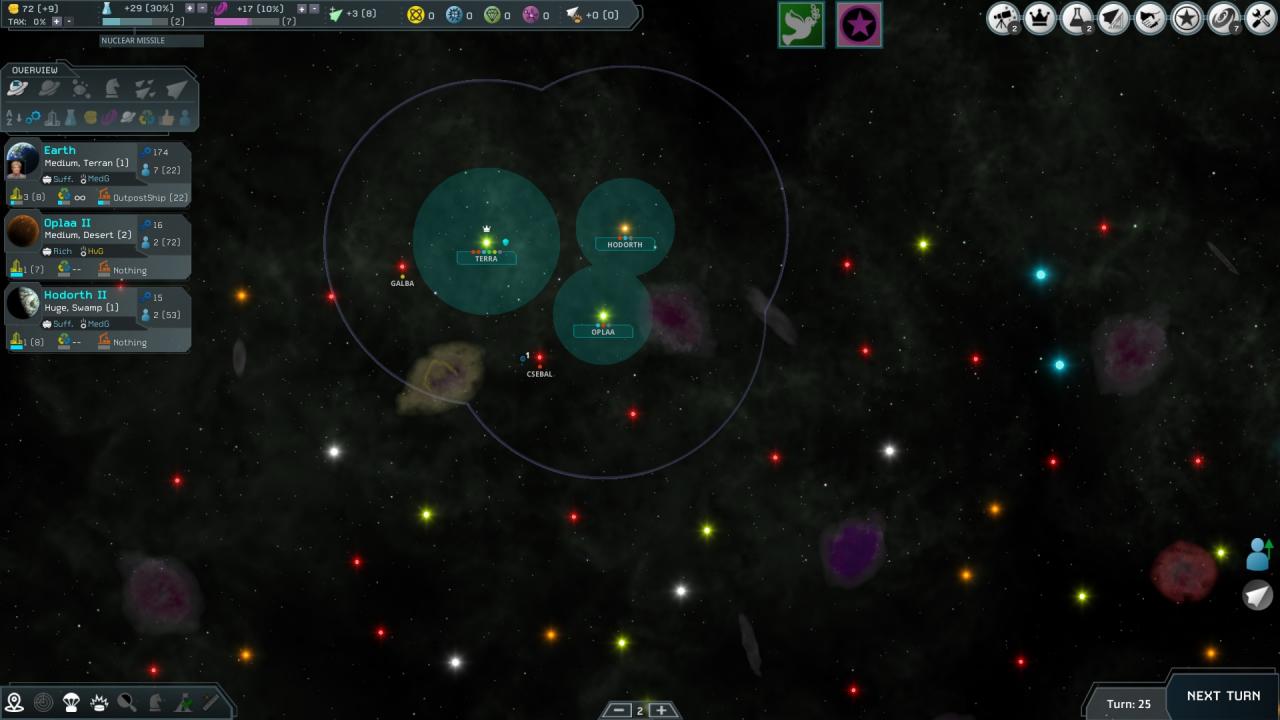 A few turns later I received another cultural advancement and chose the free survey ship which will aid my exploration efforts tremendously. Both of my new colonies as well as my HW have increased infrastructure levels. On my HW I used the new level on starship craftsmen to further reduce the completion time of the outpost (above what you get just from the production increase). 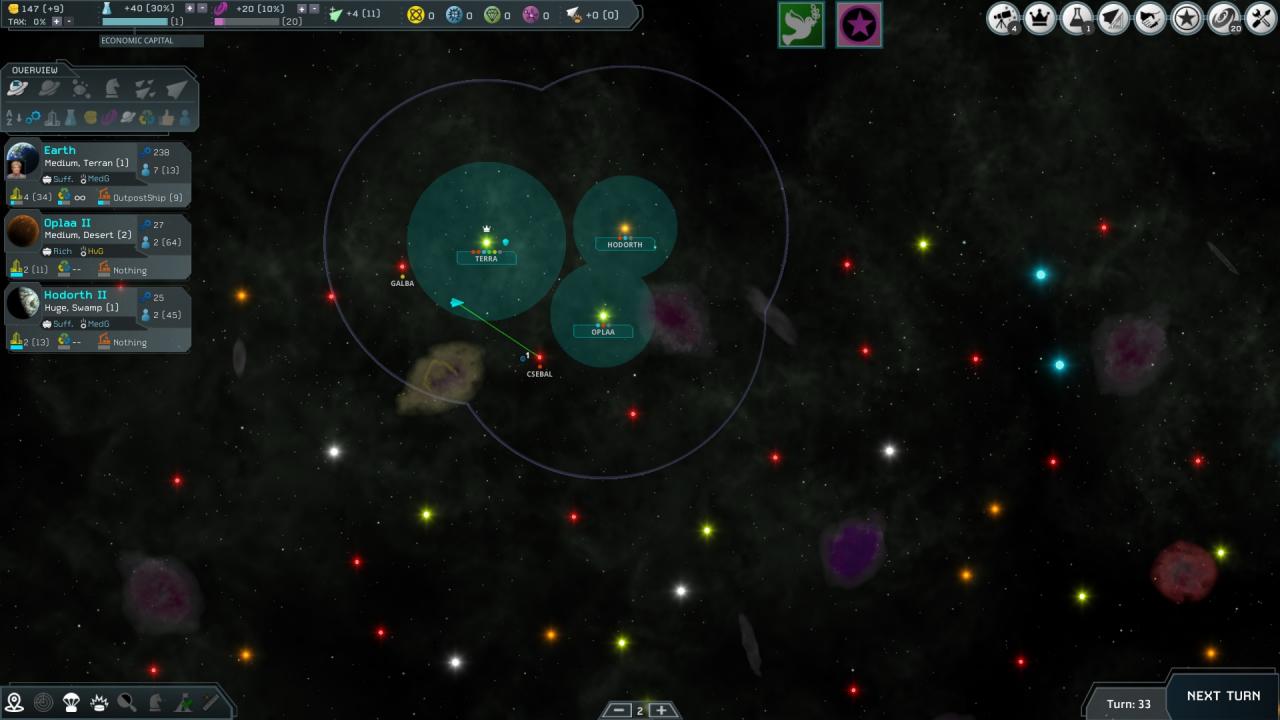 My outpost was completed on turn 42, and while I could have set it on Jupiter, I decided instead to send it to Galba which also has a source of HE3. However, by sending it to Galba, I will also be increasing my logistical range and give myself more systems that can be easily explored. 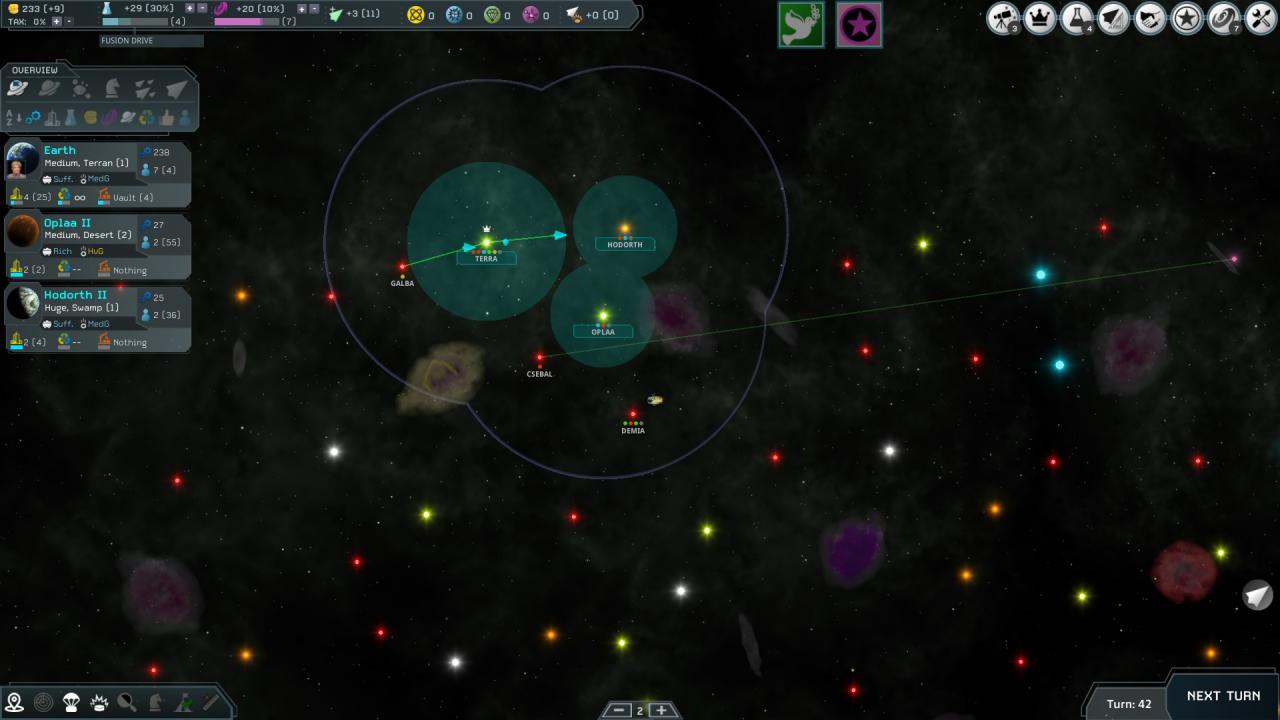 I got very lucky this session. First I found a few hundred credits at the ruins located on Werv. Then a short time later the Militia event fired and I had the cash to grab the Cruiser option. Earth has had further population growth and my industrial output has increased. I am now constructing my second building there. I have already built a vault in order to increase the max population capacity of my HW, and am now building a marine barracks which will give me a morale boost as my race is a dictatorship (higher morale means more production). Keep in mind that for a good portion of the game, especially early, your HW is the main driver behind everything, do what you can to optimize it.

My new colonies now have their third infrastructure level, as a result I have re-arranged production and begun constructing there. The medium desert world will get a vault to start but the huge jungle doesn’t need it,(total population over 16 starts incurring a morale penalty, -4% per pop over the limit) and will get a barracks to start. 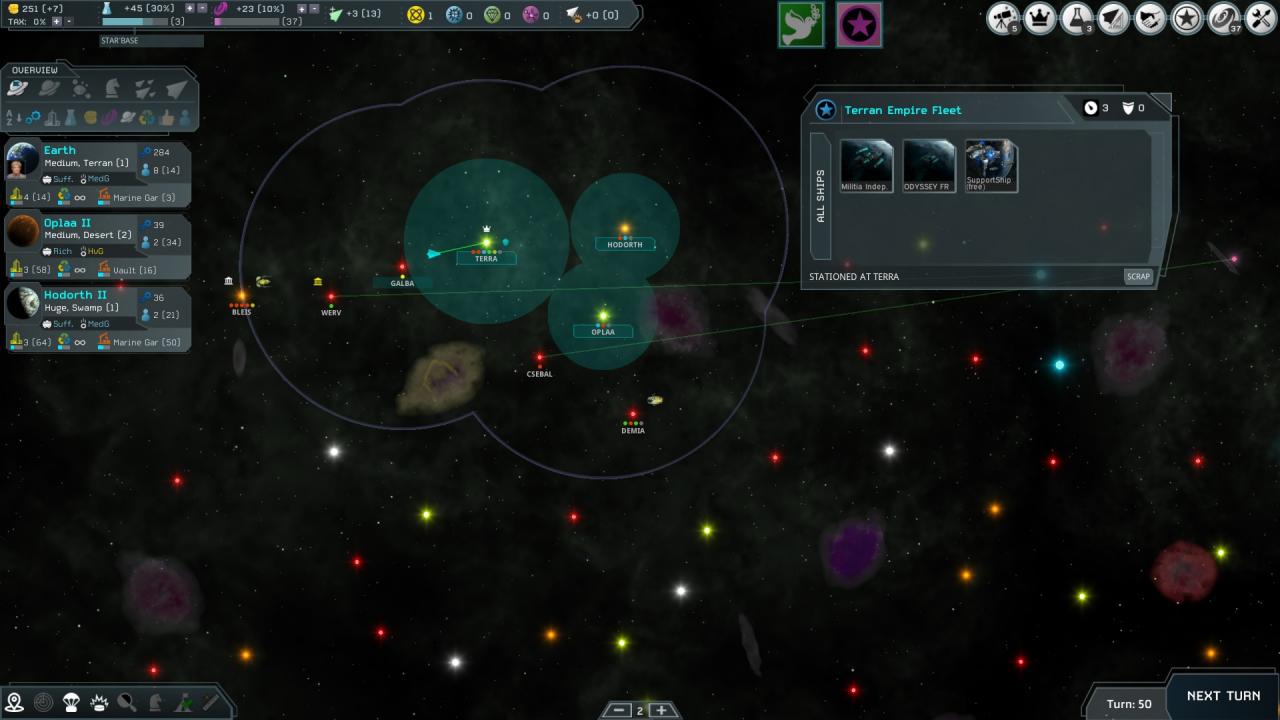 The end of this walkthrough comes here at turn 65, take a look at the shot and notice some things. My treasury is good but I am not generating much excess cash. This is due to the maintenance cost of the buildings I constructed, for example, apart from the vault and barracks, there is also a space elevator on earth which means I can produce ships even faster. As soon as the colony ship there is finished, I will construct an economic capitol to start generating more funds.

Now notice the colony ship under construction at my HW? It only needs twelve turns to be completed at this stage, this is due to three things. My infrastructure went up another level and I chose craftsmen again, the aforementioned Space elevator and my resetting production allocation, which is now 60% geared towards construction with the rest evenly split.

Soon the population on my colonies will grow as well and my efforts will rewarded even further. I have researched numerous technologies, advanced culture three times, fully explored many star systems and a few sectors, built an outpost to mine Helium three, and begun construction of a colony ship.

At This point I have a stable nation, I can increase my production further with robotic mines or by mining Asteroids, I can increase my research by establishing scientific outposts, I can continue construction of colony ships, or even design and build new warships…I’ve gotten through the early game and the possibilities and choices in front of me are now endless. The best part? You don’t have to follow this exact recipe to succeed. I like to balance things out, others like to min max, eventually you will make choices different than the ones I took here, it doesn’t matter, there are many roads to victory in ISG 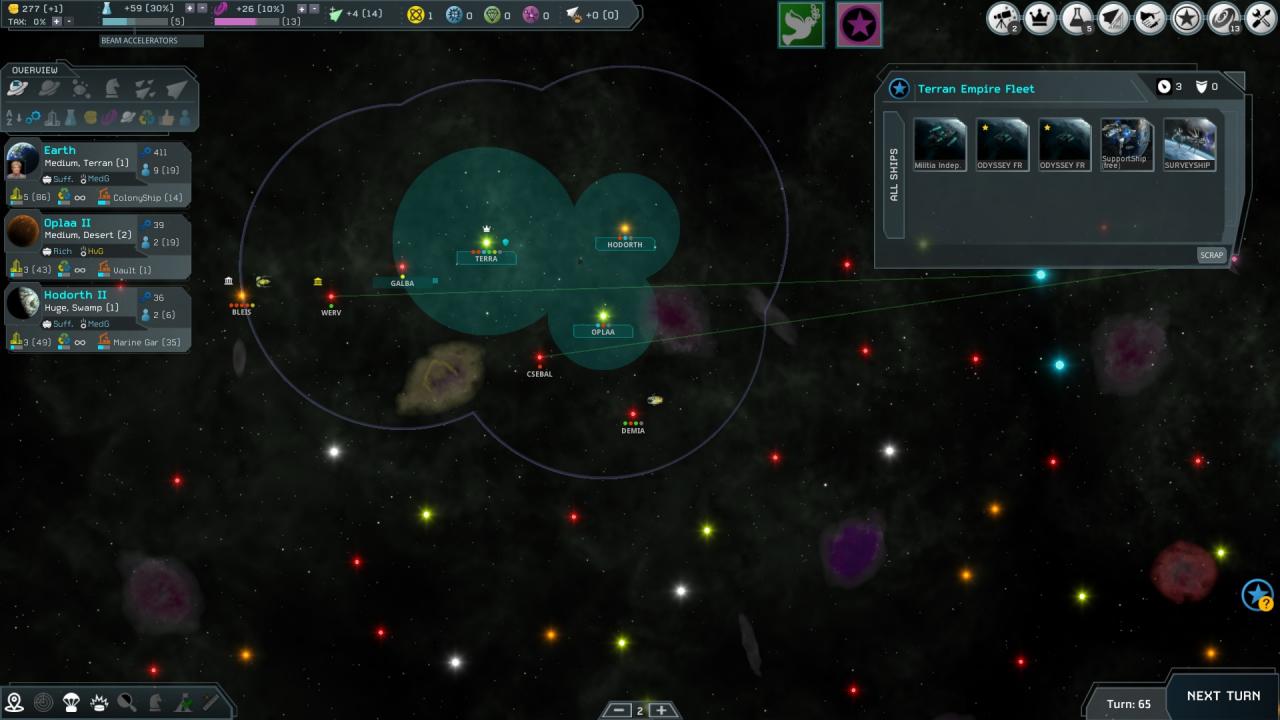