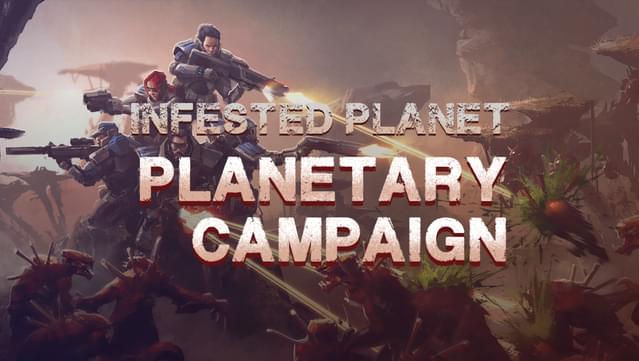 1.Enraged Spawn:
Hives start spawning fast exploding aliens. As long as you have medipods, you should be fine.

2.Brutes Spawn:
Hives start spawning Brute aliens. They Reflect, so ditch any weapons that fire bullets when fighting them!

3.Tower Spawn:
Releases a creature that travels to a specific location and “deploys” into a cluster of several towers and spawn sacs. You get roughly a 10 second warning when a tower spawn attack starts. Be mindful of the indicator. If possible, use Snipers or grenades to stop them. If they do end up deploying, use a helicopter strike (preferrably 2) to get rid of it quick.

4.Spitter Spawn:
Spitters are basically grubs with mini tower-like attacks. They come in large numbers but are fragile. Spitter spawn will randomly spawn spitters that attack your positions. Counter with Medics and Miniguns. Riflemen will work as well as turrets for defense.

5.Guardians:
Towers are replaced with Guardians.These are aggressive aliens armed with shotgun type weapons that will actually attack you, not just defend the hive. When hurt, they will retreat back to their “eggs” to heal. This is when they’re most vulnerable! Grenade or Chopper Strike accordingly! Also remember that 2 Snipers will kill 1 guardian instantly, so try sniping them and pulling back while the rest of your team moves in. Sometimes you just have to outgun them with Miniguns and airstrikes. (By rip) For those going for the Guard Slayer achievement, make sure these doesn’t overlap with the other Spawns in addition to Carapace and Impact.

1.Mimicry:
Spawns 3 clone “eggs” when a hive is destroyed. These will hatch after only a few seconds so act fast. Make sure you have at least 6 ammo when the hive explodes so you can grenade the eggs as a counter. Sometimes 1 grenade does the trick, although I find not always. If clones do spawn, counter with snipers or even better, scouts!

2.Hive Spit:
Hive essentially acts as a tower. Again be mindful and plan for that incoming damage. You should be OK with at least 1 Medic in the squad.

3.Consumption:
Hives can consume towers to gain back health.

4. Barrier:
Alien hives create barriers to protect themselves. Choppers do a great job of clearing these out and Miniguns go through them like a hot knife through butter. If neither are an option, remember you don’t have to destroy them, you can always go around!

5.Hive Shell:
Creates a shell around the hive when its health hits about 25%. Bullets are reflected. (Don’t use Minigunners if you see this!) Flamethrowers are great for this.

6.Counterattack:
Everytime you take a point, every active hive will spew forth a greater number of enemies which travel at a significantly fast speed. The effect is temporary, but repeats for every point captured.

7.Bulwarks:
A random hive deploys a Bulwark creature. When this creature attacks or gets killed, it turns into a cluster of towers surrounding a hardened core. Until this core is destroyed, the towers will keep respawning and FAST. Snipers do little to no damage against the core. As with Clone Attack and Tower Spawn Attack, watch for the indicator. Your best bet is to kill the towers with snipers then move in quick with flamethrowers or miniguns. Helicopter strikes are a good alternative.

8.Regeneration:
Hives and their surrounding towers regenerate health quickly. Plan your assaults accordingly, make sure you’re able to keep up sustained firepower, because the second you let up the hive will be on its way to full health.

10.Burrowing Hives:
Hives occasionally will appear in your territory! Yep! Ideally, a triple chopper strike will stop this mutation dead in it’s tracks. Either way, get to it quick! Set up turrets or split your team to hold the line, while everyone else attacks the hive. The longer it stays, the more trouble it will be.

11.Toxic Spit:
Hives will shoot out toxic once they reach low health. Just destroy the hive and move in to take the point and leave the toxic cloud 🙂 (easiest mutation for me so far)

1.Rust:
Let’s alien poison attacks hurt anything metal a whole lot more. Think turrets and bunkers. Only counter is to keep the aliens at bay, which you should be doing anyway. Just be mindful.

2.Virulence:
Medics and bunkers no longer heal poisoned Marines. Time to go on the offensive, use those snipers to take out the towers before they can poison you, be prepared to switch to Medics when they’re no longer poisoned.

3.Neurotoxins:
This mutation causes your squad to slow down significantly when hit by towers. Not much you can do to counter since you should be avoiding being hit by towers in any case. Just be mindful when approaching a hive and don’t forget that snipers will 1-shot towers from safety.

4.Impact:
Pushes your squad members away when hit by a tower, effectively giving towers the ability prevent your men from closing in. This is especially dangerous in conjunction with bombardment and neurotoxins. Again, snipers, or even Miniguns. Double or triple Helicopter strikes with clear them out as well.

5.Necrophage:
When a squad member is killed, an egg is left in his place which hatches into a clone. Be mindful and have grenades on hand to pop the eggs before they hatch.

6.Calcification:
For a short time after everytime you capture a point, dead aliens leave behind a temporary barrier. Counter with non-bullet type weapons.

7.Sharp Spikes:
Poison spikes will deal part of their damaged instantly, as opposed to over time. Have those Medics on hand!

8.Infestation:
Dead human structures become infested. You should be avoiding your structures be destroyed anyway, so be mindful when leaving turrets by themselves to defend large sectiosn of your territory. A double or triple airstrike should save you sometime and soften the target before moving in.

9.Bombardment:
Causes towers to increase signficantly in range. Again, be mindful and take solice in the fact that snipers are still effective even after this mutation.

10.Guardian Nest:
(See Guardians*) A creature is deployed that spawns a guardian nest, counter as you would guardians if it deploys. Ideally, Sniping of grenading the creature will prevent any guardians from spawning whatsoever.

11.Carapace:
Towers grow a hardened shell around them. Remember that all barriers in Infested Planet are suspectable to explosives. That means medics, choppers and grenades!

12.Spitter Guard:
(See Spitter Spawn) Spitter will defend hives as you attack them.

13.Mimic guard:
See Mimicry. Clones will now defend enemy positions. Basically, Clone “eggs” will appear in enemy territory, eventually hatching into a Clone. These eggs stick around for a while, use the opportunity to grenade or Snipe them! If possible, send scout(s) on egg sweeping runs when needed.