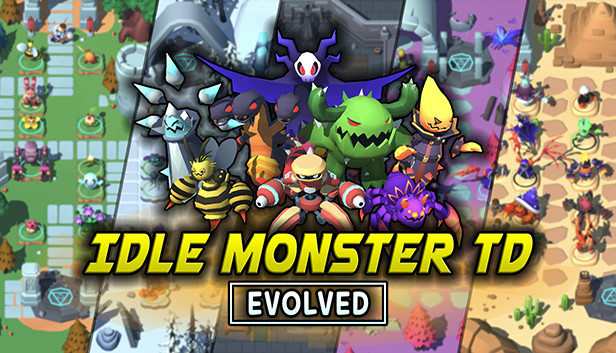 For Idle Monster TD: Evolved players, this guide provides a list of all upgrades and their maximum values. Let’s check them out.

Because all spells unlock and upgrade with energy, it makes sense to start with Power Source first. Along with the other resource spells, you’ll also want to purchase the auto-cast perk with them. Since you can only have 4 spells active at one time, it is pointless to waste gems to purchase auto-cast for any combat or buff spells.

While all resource spells with auto-cast should be used at all times, trying to reach higher waves later will have you wanting to get a little extra help by unlocking the others as well. They will in return provide better drops from active play bonuses. However, combat spells may seem to be helping early on, but the 4 buff spells will provide a better advantage post wave 2500. You’ll soon realize when there is a point that crits are more powerful than raw damage, but because that doesn’t happen until late game, Here are my recommendations:

Start by at least unlocking the ability to cast each spell. Then spend roughly 1000 Energy through each spell in the following order:

That should total around 11,000 Energy. After this mark, the cost to upgrade a single spell level might be too much to bear at this time. Plus, you’ll probably want to save up the energy to purchase monster evolutions, or for a bit of research.

The only spells worth auto-casting while equipped.

It’s true that after every 10 waves complete towards your highest awards a chest holding a precious artifact inside. Unfortunately, this is where you don’t get to decide what gets upgraded. The first 20 you come across won’t be worth showcasing in a museum, but it’s possible to reroll in order to swap them for better ones. However, they will only shuffle around among the tiers that you currently have unlocked. Hence, I suggest waiting until passing wave 2000 before you throw the dice.

At 600 waves you can max out all the artifacts at tier 1, but tier 2 unlocks after passing wave 200. Another 650 waves later you can max out the artifacts in tier 2, but tier 3 unlocks at wave 500. Not only that, tier 3 introduces the first artifact that doesn’t have a limit on its maximum level. Disregarding the artifact with no limit, it takes 600 more to max the rest. Tier 4 comes around wave 1000, but doesn’t have an artifact with limitless power. So, 550 waves will max them out. Then we have the final 5th tier unlocking at wave 2000 with 5 artifacts with unlimited levels.

This brings me to my final point. it takes 2400 waves to max out all artifacts with a level cap. Taking all of this into account, waiting to roll 50 artifacts once hitting wave 2500 seems like a pretty good bargain to me. That’s only 2 gems per artifact. If you don’t get anything good in the mix, I wouldn’t feel bad about trying it once more. Ultimately, your goal in all this is to try and hit the jackpot.

First off, all research costs Energy to upgrade. You really should be using it to evolve your monsters first. However, the first couple of levels are pretty cheap, but the evolution covers more ground with a single exchange of Energy at a better value return. So, if you don’t have the patience or just want to spend a few Energy here and there, the following order is how I would do it:

Remember we are focusing on farming resrouces first before going for damage. We also want to prioritize our rate of grinding Energy and and Experience. Most aspects are included with monster evolutions, but Experience drop is not one of them. Also note that 150 and 350 gems will be required to unlock tiers 2 and 3 respectively.

As I’ve mentioned lots of times already, evolving your monsters will provide the best bang for your buck. 4 research options have infinite levels and become increasingly expensive at certain marks. It should be only after the suggested monsters evolved at least to evolution 12 before pursuing further purchases in the research tab.

Prestige Points should be easy enough to come by as you’re making progress on farming Energy in the Enchanted Forest. Like the upgrades before, some of them don’t have a maximum level and become increasingly expensive to purchase. As per usual, focusing on certain upgrades will help smooth things along faster. You’re free and safe to spend them as you earn them (instead of waiting to save up for a big purchase) because these upgrades don’t cost Energy. This, of course, applies after you’ve unlocked all 16 upgrades. So, the following list will provide the suggested order to start upgrading to maximum levels:

It is possible that you’re lucky enough to get a good set of temporary relics without needing to spend the hard-to-come-by gems awarding extra boss energy drop. However, these are really expensive and shouldn’t even be considered as a factor of increasing your Energy farming rates until all regular Prestige upgrades have been maxed.

You may have also noticed by now that there is an order to upgrades in every tab.
Energy>Resources>Skill/Spell CD>Exp>Range>DPS>Gold>Other Upgrade Types.

Usually Damage and Gold drop upgrades are the ones without a max level limit. Even though they come first in the list of importance, it might be wise just to max the other upgrade types first before pursuing the limitless power they provide.

Earning Tech points might be a bit trickier than the rest of the resources. You’re going to be very tempted to start knocking the Necromancer out of the park, but I advise you not to do that just yet. As with the Tank Swordsman, each time you defeat her increases the HP she starts with when spawned. You won’t need to kill her in one pass, but it will become increasingly expensive to summon her each day. Plus, unless you’ve purchased other upgrades to award more tech points, it’s hardly worth it.

I honestly suggest not starting with the Necromancer until you’ve at least maxed out Tech points in the Minigame Upgrades under the Prestige tab. it also wouldn’t hurt to have a good amount of artifacts contributing to increased Tech Point drops. And, if you have some spare Gems laying around (which i’ll recite again later), grabbing a few extra Tech Points int he Gem Shop. This way you’ll be earning 15-20 at a time to get some good Tech down the tree instead of bearing the anxiety of earning 1 at a time. That’s about half of her maximum drop limit of 41.

It’s a Tech Tree with 2 branches that split again. How should I make it down this line of upgrades? Well, I’m glad you asked because that’s exactly why I’m here to tell you.

In order to unlock upgrades further down the branch, you’ll need to purchase at least one level of the upgrades above it. There are only two upgrades in the Tech tree we can use to our advantage of improving our Energy Drop Rate. So,

After our journey of continuing to increase the output of Energy, we can move onto other Technologies from the tree. The rest is the order I would save my Tech Points to max. Just remember only a single level from previous technology must be purchased first.

It’s already hard enough as is to earn enough Tourney Points from achieving a good placement on the leaderboard by the end of the tournament, so you’ll just have to be patient and active enough to save some in the bank for the upgrades that matter first. Again, if you want to unlock the higher tiers that offer better upgrades you’ll have to spend a total of 500 gems to unlock them.

Tournament upgrades are a bit more convoluted than the previous ones. Partly because the upgrades in higher tiers are significantly more expensive than the ones in the first tier. This goes against the regular order of purchasing upgrades because you’ll need to get to a higher bracket before you can start saving up enough. So, please make sure that you are participating in the tournaments as soon and often as possible.

Once again, the order I suggest purchasing and maxing Tournament upgrades are as follows:

I’ve already stated that gems should first be used to purchase auto-casting for spells and unlocking upgrade tiers. After that, all the remaining gems you acquire should be spent here before considering Resrouce Packs for an extra nudge of resources. All the same rules apply here as with every upgrade tab.

Once again, and for the last time, the final tab of upgrades should be bought in the following order:

At this point in the game you should have every upgrade leveled to the max. Congratulations! Now the only thing you should have left to pursue is continuing to evolve your monsters and level up your pets. Any gems left over can now be used to purchase Resource Packs, but I do recommend saving for the third.