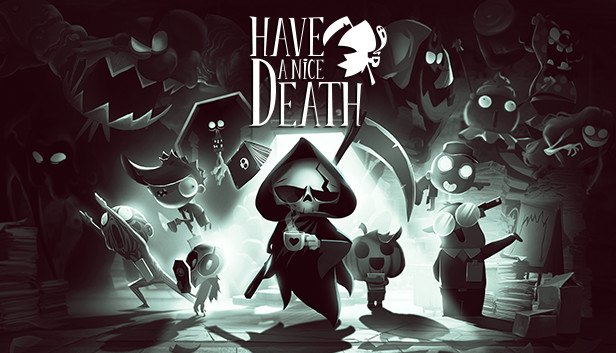 For Have a Nice Death players, this guide will go into helping you learn the bosses attacks, and surviving against them.

Brad-A1, Brad will charge at you from the air (rarely ground) and fly past you. A2, Brad will wind up his fist and do short motions toward you, he normally follows up the first 2 punches with a dive that goes farther (Please note that if you are behind him while he is doing this attack the 3rd “Dive” that I just mentioned can make him turn back around to hit you). He can also do the attack without the dive, but when he does he will instead do the 4 punches with a short break in between the first 2. A3, Brad will fly in the air and throw rocks from the sky down at you, Just dash through them if you need to and don’t try to attack him during this. A4?, sometimes Brad will jump into the center of the arena and take a selfie then falling to the floor. Sometimes this move can make rocks come up from the floor. There will be markers showing where they come up at.

Will Hung- A1, Hung will shift his weight back and do a punching like motion, this attack will hit you multiple times. A2, The rope is thrown behind the body and is thrown far in front of him. A3, Hung will float a little higher in the air and pull the rope back behind him, then slam it into the ground. The game will show you where the ropes will pop back up out of the ground so just avoid them.

Mr Gordan Grimes- He won’t move normally and instead will sink into the floor and materialize in another part of the map. A1, Gordan thrusts his hand forward, he only does this if you are to close to him. A2 Gordan sticks his hand in the ground, his hand then comes back up from the ground, the third time his hand comes back up he will shoot 3 hands instead of one. A3, Gordan shoots small balls of tar at the player in a shotgun like manner similar to the crow enemies you encountered earlier. He will usually use this attack twice in quick succession.

READ:  Have a Nice Death Basic Guide For Beginners (Discipline Your Employees)

Slyma-A1, Slyma always does this at the start of he fight. She faces herself down and pushes herself into the air. This attack will hurt you if you stand to close to her while she’s doing it. A2, Slyma will create a web ball that will slowly creep down the area until it reaches the floor where it will linger for about 2 seconds. A3, Slyma will do this attack when she is done laying her webs, She will fly down in an ark towards the player. A4, Slyma will create a pool of crepe that will linger for a few seconds damaging the player. She will always do this attack while facing the player.

Mr Hector Krank-A1, Hector lunge forward and thrusts his claw at you. A2, Hector thrustes his claw at you, this attack go’s farther then Attack 1 and he does not lunge at you either. A3, Hector charges you, just jump or dash past him. A4, Hector summons 2 little crabs to fight you.

Denzel “King” Dengue-A1, Denzel flies offscreen and charges at the player, you will see indicators of where Denzel is charging. A2, Denzel will spit out little minions that will fly towards you, these adds can be killed in one hit (I think maybe I just had high damage). Another thing to note is that Denzel will gain some health back from hitting you, I don’t believe this effect triggers with her adds though.

READ:  Have a Nice Death Basic Guide For Beginners (Discipline Your Employees)

Candice-A1, She will teleport randomly around the arena multiple times then thrust her lollipop (her weapon) at the player, she will only use this attack on the far sides of the arena. A2, mostly the same as Attack 1 except she can do it from the middle as well and it has shorter range. The attack also come from above so you can’t jump over it. What you could do though is jump then dash. A3, if you’ve played Hollow Knight this attack should be easy, think if it like the Soul Master’s second stage. She will teleport above you and slam her lollipop on the ground then immediately teleport above you again and repeat. She can also teleport once to get you to dash then teleport without attacking just like Soul Master does sometimes.

Major Warren Pliskhan-A1, fly’s in the air and sprays fire downward, during this attack he follows the player and try’s to stay on top of them. Pliskhan fires 2 rockets at the player these do not explode after a certain time and will fly off the screen. A3, Pliiskhan rides on top off a giant missile and chrages at the player but will pull up at the last second, this attack will leave trails of fire behind him. However at the point he pulls up there will be a gap in the fire to dash threw. A4, He fires rockets into the air which will come back down in random places in the arena, there are no ways to know where they will land before they appear on screen. A5, He jumps around on a small bomb, his jumps ark and create explosions when he lands on the ground. A6, Fires one big missile which can be destroyed.
READ:  Have a Nice Death Basic Guide For Beginners (Discipline Your Employees)
That’s all we are sharing today in Have a Nice Death All Bosses and Mini-bosses Attacks Guide, if you have anything to add, please feel free to leave a comment below, you can also read the original article here, all the credits goes to the original author Oak