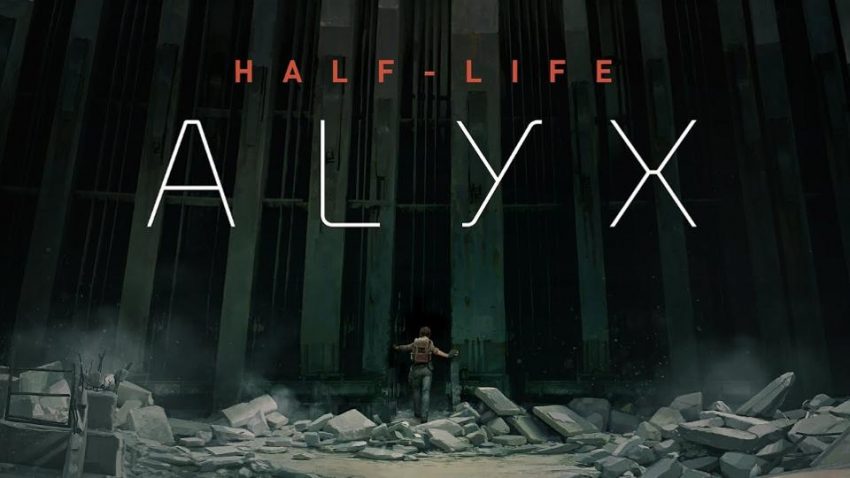 Welcome to SteamAH. here is a guide on how to get all achievements in this revolutionary VR title! this is a complete achievements guide with all 11 chapters. hope this guide will help you.

It should be quite obvious, but there may be minor spoilers from looking at this guide. We do detail when each story-related achievement unlocks, which could ruin a little bit of surprise for some. There is no spoiler text in this guide. View at your own risk. Note that I will do my best not to give away any major plot-points, however.

Without further ado, let’s get into the long-awaited Half-Life: Alyx!

Chapter 1 has no combat. But it has plenty of easy achievements!

In the very first room, there is a snark trapped in a little glass tank. It looks just like the achievement icon. To its left is a food container; dump some into his tank and the achievement will pop. 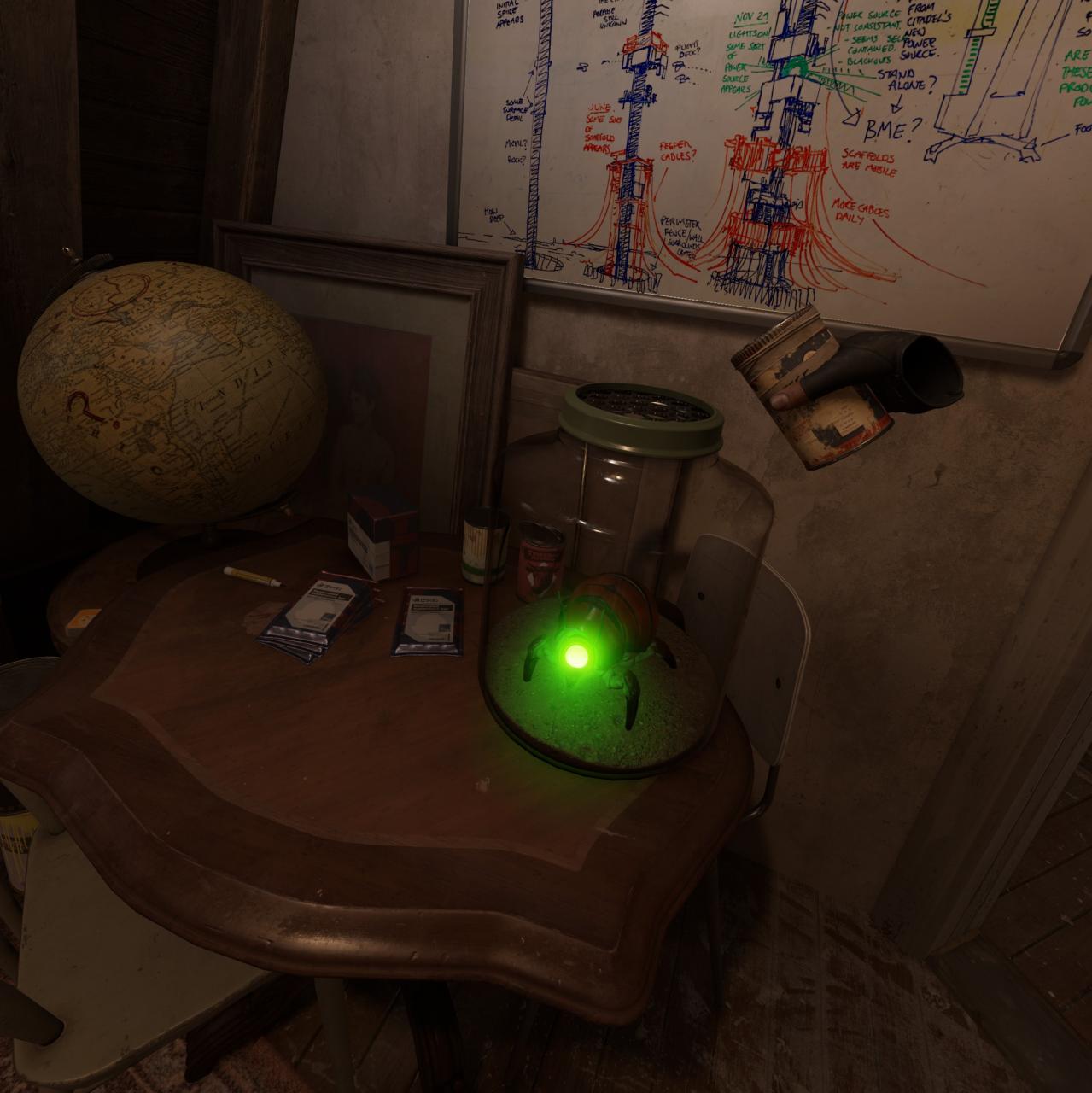 Hit and Run Break out of the Combine prisoner transport vehicle.

Storyline, cannot be missed. Unlocks after you exit the crashed prisoner transport vehicle and walk into the streets.

On a Roll Interact with the playground somehow

This achievement is a little misleading in its description. When you’re at the playground, you’ll see a red bucket nearby, which you can easily pick up. Go on top of the slide and roll this red bucket down to get this achievement. 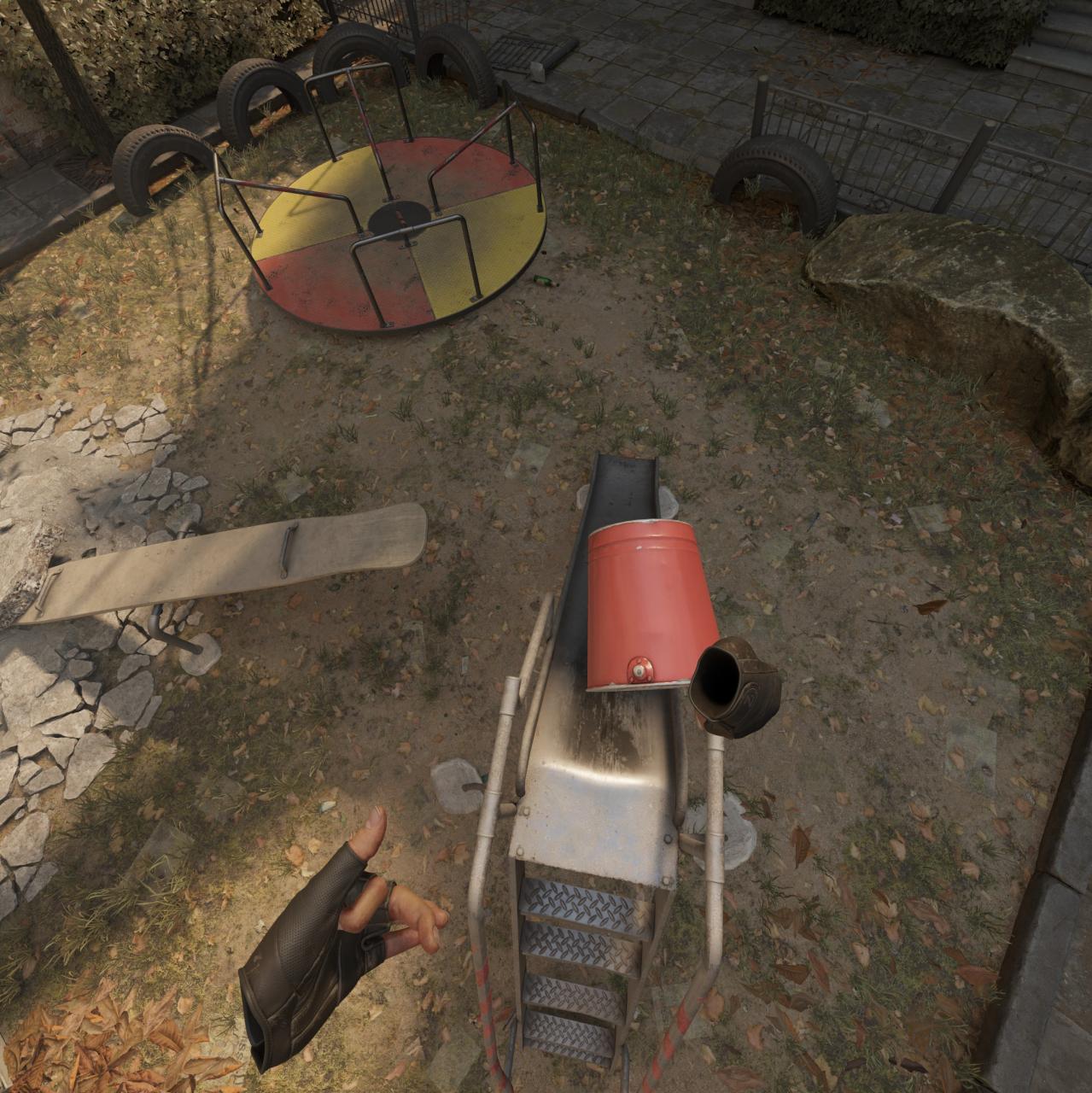 When you first meet Russell, pick up the yellow device (looks like the achievement icon) and put it on Russell’s face. Nothing special happens, but the achievement unlocks. 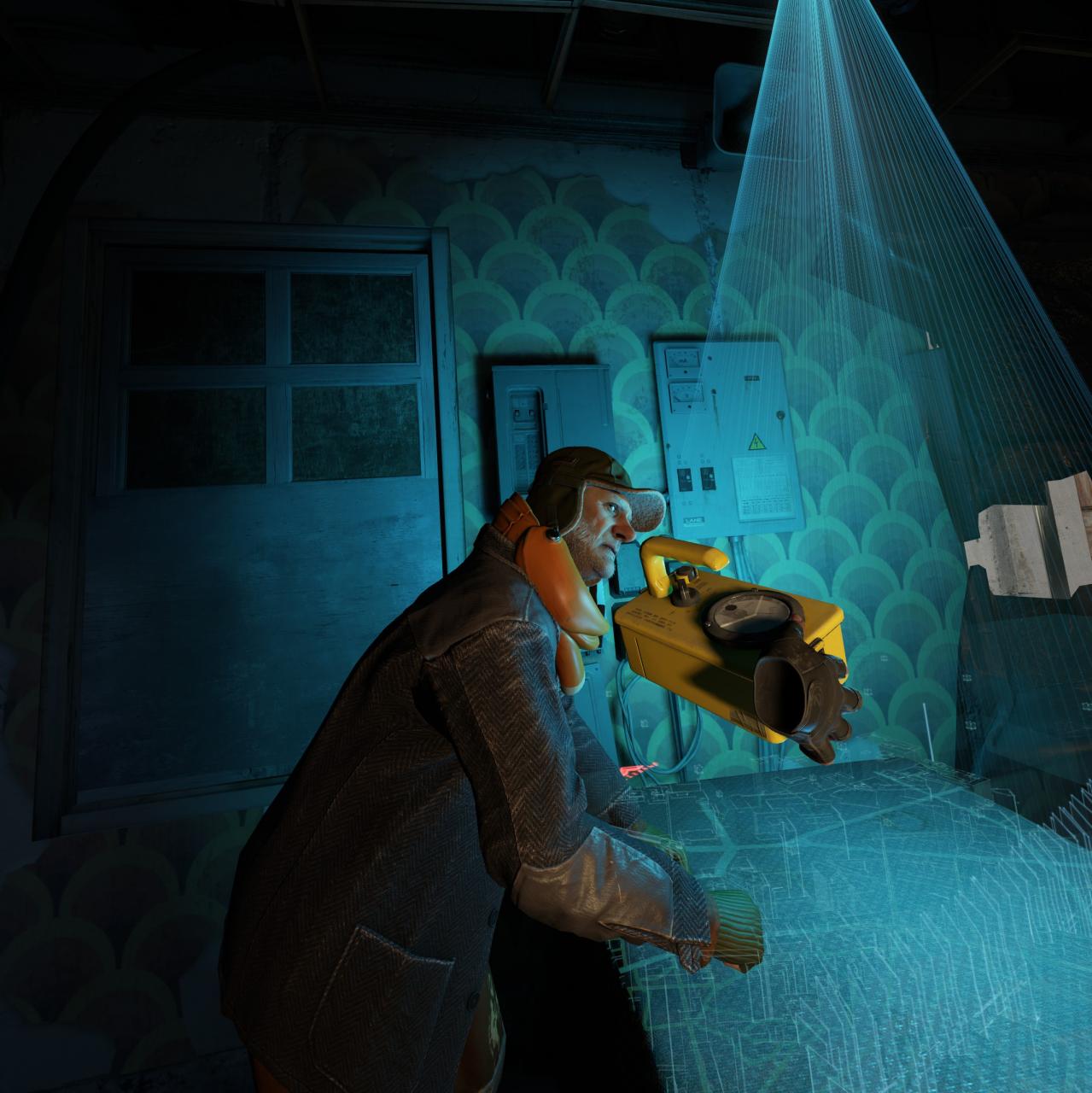 In Russell’s room, there is a miniature baseball character (the one in the achievement icon) located in front of a monitor to the right of the door to the gravity gloves. You must put it as your representation in the minimap when Russell asks you for an object. 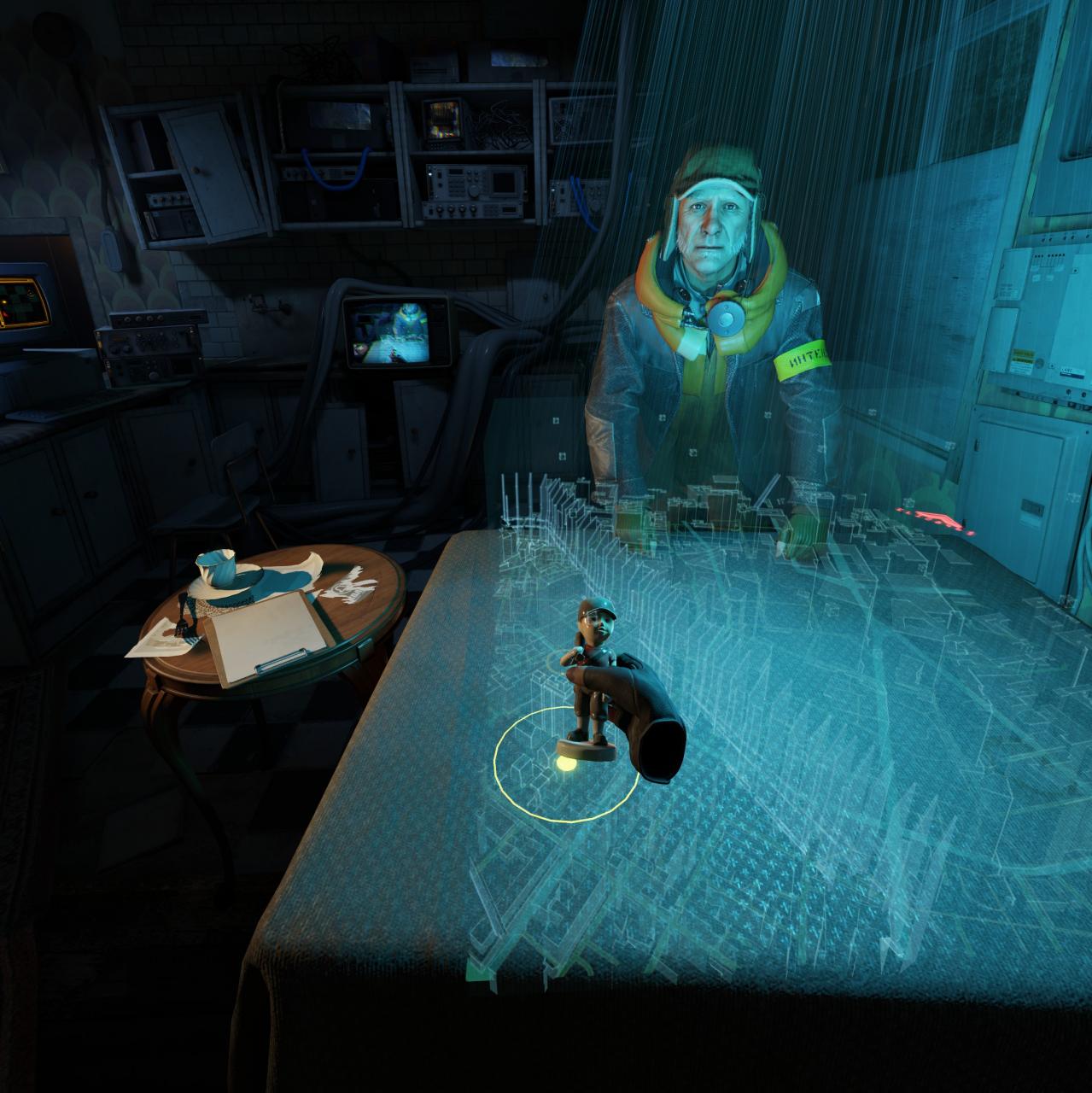 Mag-Snagger Catch Russell’s ammo magazine before it hits the ground.

When you first go outside, Russell will throw a gun out the window for you to catch. Don’t worry if you miss. After he throws the gun, he’ll throw you a magazine, and you need to catch this in mid-air. It’s not too hard, but if you miss, you need to reload a previous save.

At the very end of Chapter 1, in the area where you first get the gun and learn to use the gravity gloves, do NOT go on the train yet! There is a gnome here, and you need to bring it to the end of the game for the Gnome Vault of My Own achievement. You can either do a second playthrough later on story mode (to speed things up), or grab it now and just do a single playthrough of the game. This is a full-length VR game, so it will take many more hours if you choose to do this later, but you may find it more valuable to have a normal first playthrough. 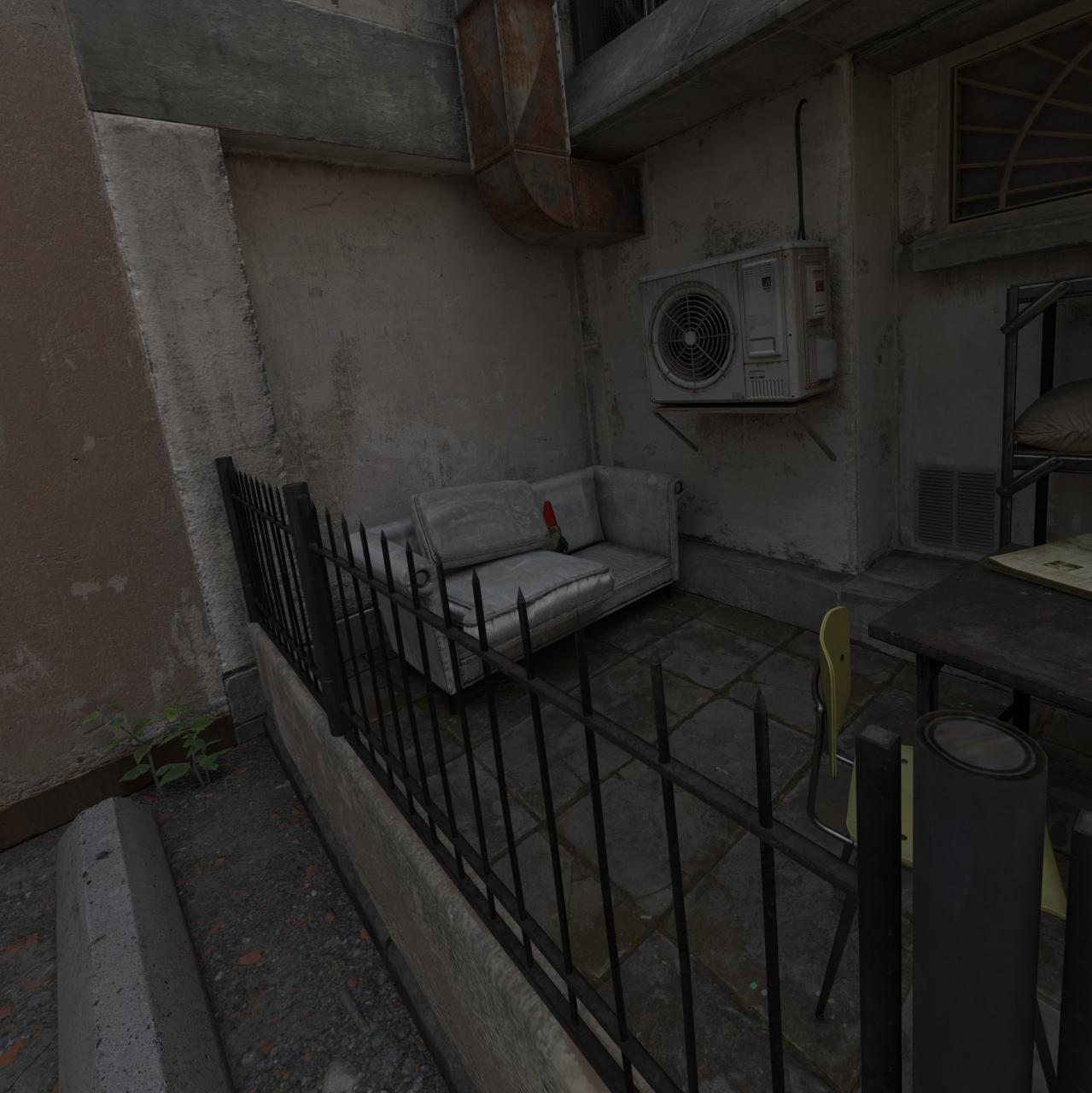 Chapter 2 begins when you wake up on the train.

This one is practically unmissable; anyone playing this game is going to be needing all the ammo they can get. Simply use the gravity gloves to take an ammo magazine off of a dead body at some point. There are plenty of opportunities throughout the game to do this, but the first is just past the first resin in the game, where there is a dead body in front of a padlocked door. On a sidenote, make sure you grab all the resin you can across the game, checking every corner.

Storyline, cannot be missed. Unlocks right after entering the Quarantine Zone, which has a giant door you unlock with the first puzzle in the game.

Smash and Grab Break open a supply crate with your hands.

Another practically unmissable achievement. The first supply crate in the game is in the trains, at the start of the Quarantine Zone. In one of them is a ladder you are required to use to progress, and next to it is a supply crate. Smash it on the ground and the achievement will unlock. Also probably loot it. Ammo is important.

Up in Arms Install your first pistol upgrade.

Right after a very intense train combat section is a room with some lockers and an upgrade station. You’ll need 10 resin; you should hopefully have this much if you’ve been looking, but if not, it’s okay as there’s plenty of other upgrade stations across the game you’ll encounter. Complete the puzzle, put your gun into the station, and buy the cheapest upgrade (Reflex Sight).

Storyline, cannot be missed. This will pop at the end of your vortigaunt encounter. He will throw you the corpse of a headcrab and say his “sustenance” line.

Freshly Squeezed Test your grip on a headcrab heart.

Just squeeze all these hearts. 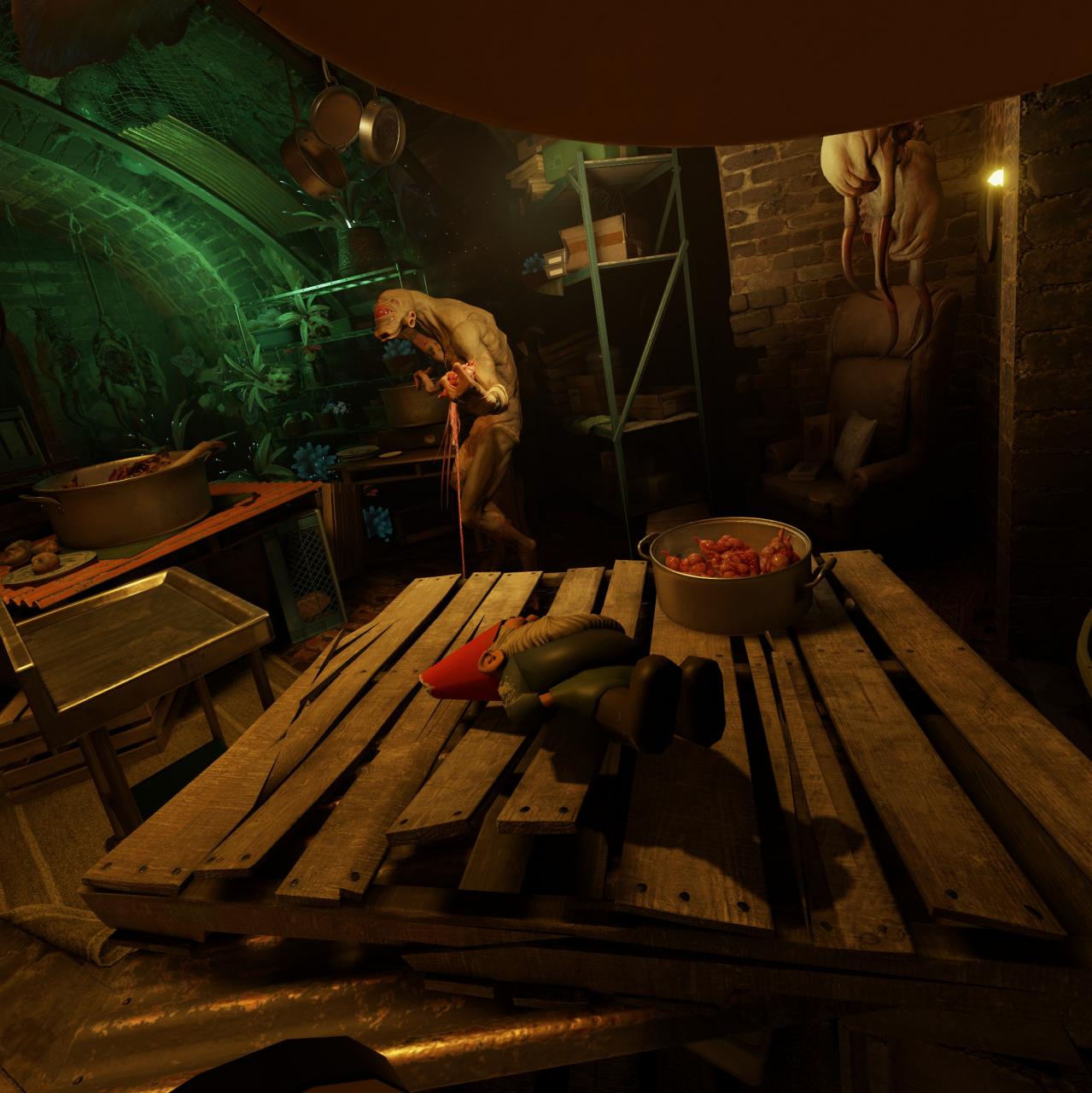 Chapter 3: Is Or Will Be

Chapter 3 begins just after the meeting with the vortigaunt.

Zombie with a Shotgun Collect the shotgun.

Storyline, cannot be missed. Unlocks after you get the red valve and exit the Xen Garden area (this is the area with all the explosives you have to avoid).

Pro-Pain Kill a grunt by shooting their gas tank.

You can first get this in the section where you first engage in combat with the combine outside. All of the combine have gas tanks on their backs, which you can shoot to instantly blow them up and unlock this achievement.

Off the Rails Stop the prisoner transport train.

Storyline, cannot be missed. Unlocks after you’ve crashed the train and it stops completely.

If you read the introduction to this guide, you should’ve been looking out for glass bottles to smash. Throughout the game are many, many glass bottles. The first chapter has a bunch, so smash every single one you find there. You should have this achievement by the end of chapter 3 for sure. Also, you can start a new save file and smashed bottles will still add to your achievement stat.

Chapter 4 begins shortly after the interaction with Eli and the vortigaunt, which happens after the train crash you caused.
READ:  Half-Life Alyx: How to Take Screenshots in SteamVR

There isn’t really any achievements in this chapter to worry about. You could get the achievement Indirect Approach at a couple points here, however.

Indirect Approach Kill a Combine Heavy while their shield is up.

This one is tricky, especially with the long load times. First, get a Combine Heavy to low health level by shooting it OR throwing a grenade at it. Then, save. Start shooting at its torso again and as soon as you begin shooting, press the button on a grenade and throw it. Their shield only goes up after being shot at a bit, but doesn’t stay up for long, so your timing must be perfect. Easy enough, just can take several tries.

Checking In Reach the Northern Star

Storyline, cannot be missed. This achievement pops at the very end of Chapter 4 after going through the window to enter the Northern Star hotel.

Xen Lootism Snatch a Xen grenade from its resting place.

This one isn’t technically story-related, but it should be unmissable. There’s maybe 3 or 4 spots you can get one of these throughout chapter 5, all of which are in plain sight. Using the gravity gloves won’t work; you need to get up close to the plant and quickly snatch it out of its grip. Don’t worry, the plants cannot harm you.

Heart-Breaker Hotel Get creative turning the power back on.

Storyline, cannot be missed. This achievement unlocks as soon as you use the first electric headcrab’s heart in place of a battery to open a door required to progress.

Storyline, cannot be missed. Unlocks when you’re about halfway up the elevator to the surface for the first time since entering the hotel. Also, this achievement title is a nice reference to the name of the 12th chapter in Half-Life 1.

Storyline, cannot be missed. Unlocks once you pick up the SMG for the first time (unlike the Zombie with a Shotgun achievement, this one doesn’t require picking it up in your primary hand for the unlock

Cord-Cutter Shut down the substation.

Storyline, cannot be missed. Unlocks as you begin your descent down the elevator to the surface after you shut down the substation and encounter another vortigaunt.

There are a few more good opportunities for Pro-Pain and Indirect Approach again if you missed either of these before.

Deadliest Catch Use the gravity gloves to intercept an incoming enemy grenade in mid-flight.

Once descending to the surface immediately after shutting down the substation, there are plenty of combine who throw grenades at you from afar. Pay close attention in this final section for them; the normal-sized combine are the ones who throw them. There are four separate waves at the end of chapter 5 to fight, 2 of which are consecutive. The other 2 are in their own areas. So be prepared to catch any grenades you see coming your way. It’s simple enough once you’re in the right circumstances.

Combine Harvester Use the gravity gloves to loot an item off a living Combine soldier.

In these waves of combine are also enemies that have items on them, such as magazines or health vaccines. There are plenty of opportunities to get this achievement by simply using your gravity gloves to snatch an item off of combine before they’re dead. The easiest spot is to do it in the fourth wave, which is inside of a building, but you can do it as early as right outside of the hotel.

Safe Trip Use the multitool to hack a tripmine.

At the very end of Chapter 5, when you’re in the new green building, there are plenty of tripmines around. This is technically missable, as you could blow them all up from afar instead, but anyone who plays this game is very very likely to instead take the intended route of disarming via the multitool. Here’s a picture of what this will look like: 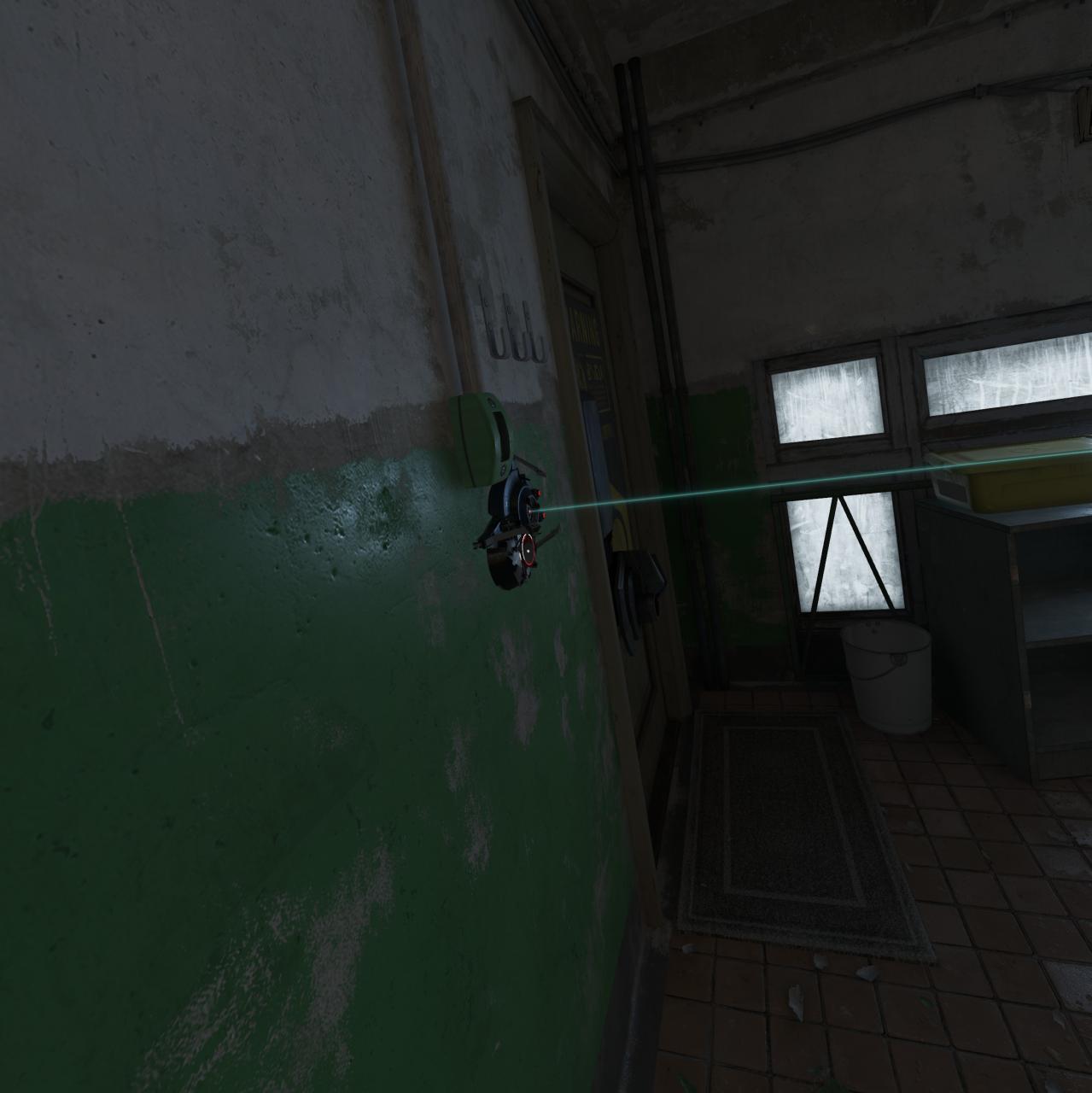 Chapter 6 begins at the bottom of an elevator shaft, next to an upgrade station above a lot of things below. Luckily, there’s not much in terms of achievements to worry about in this chapter.

Blast From the Past Defuse a roomful of explosive barrels.

After leaving the room with explosive barrels and tripmines, you need to shoot one of the barrels. You’ll wanna step back a bit as to not accidentally kill yourself.

Near-Jeff Experience Stay close to Jeff for 10 seconds (but not too close).

Get close without moving to Jeff, easy achievement.

Hold Your Liquor Catch a bottle falling out of a cupboard before it breaks and alerts Jeff.

After the first encounter with Jeff, you will be in an area without enemies, check all the cupboards, one will have a bottle, grab it before it hits the ground. 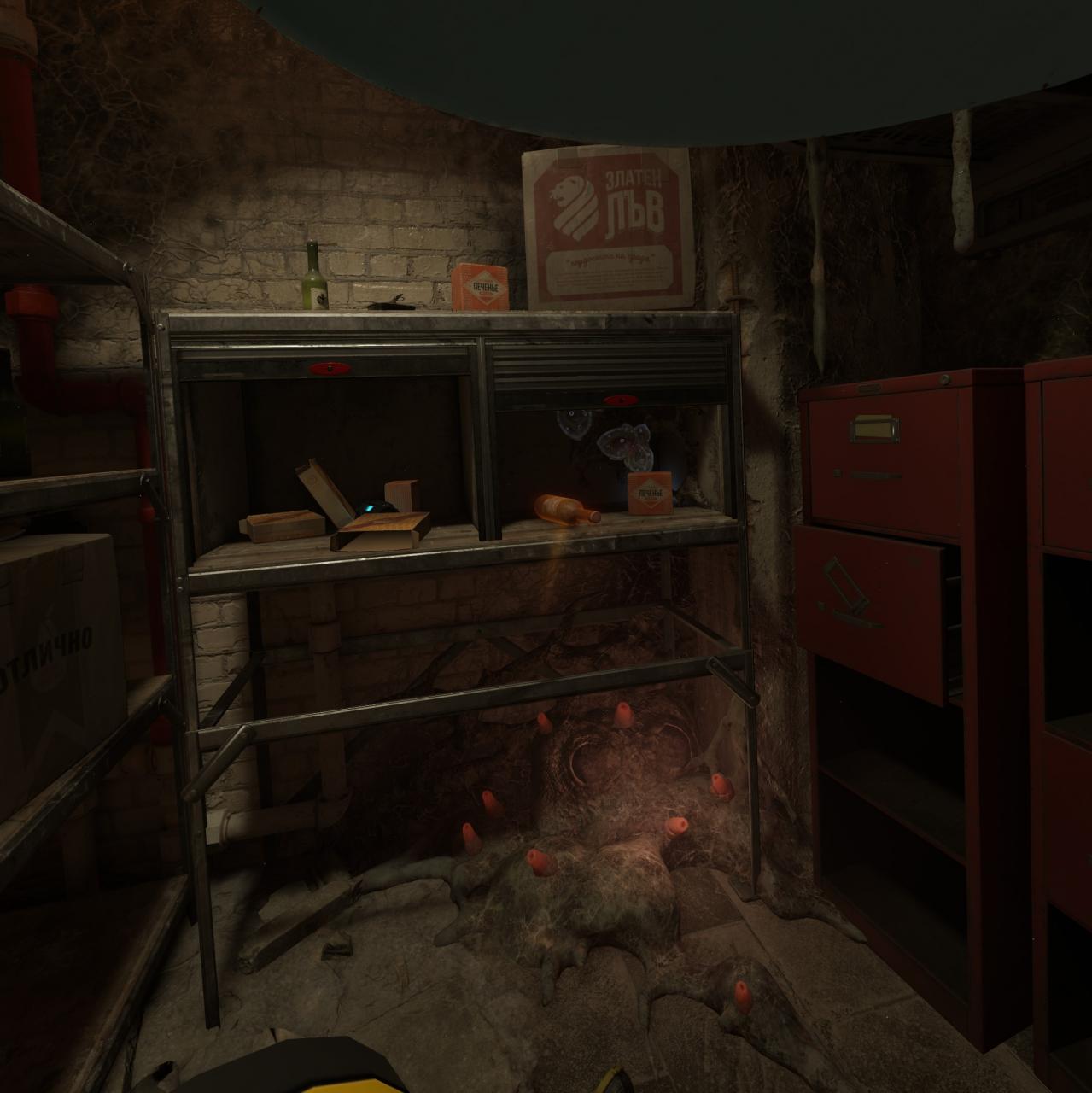 Once you trap Jeff in the trash compactor, save the game and press the button to compact Jeff, killing him, after that you can reload the save and get the achievement for not killing him

After leaving it locked in the garbage, just enter the vault.

Before finishing the chapter, be sure to bring a bottle of vodka in your inventory, this is for the Team Spirit achievement that is unlocked in the next chapter.

Unlocks at chapter start if you have a bottle of vodka in your inventory.

Point Extraction Get to the superweapon.

By Mercury, Klumb3r and Pickness666