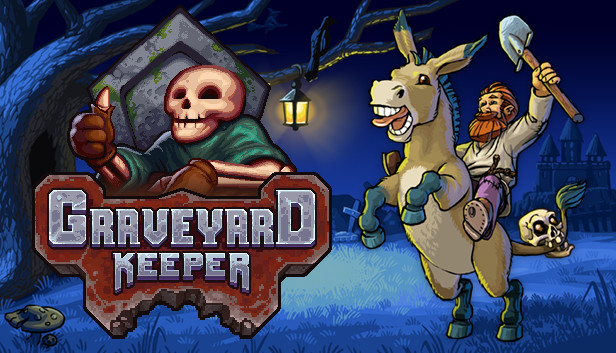 For Graveyard Keeper players, this is a complete overview of what corpse can be delivered to you, what can influence those factors and how you can maximize the amount of “good” corpse and their valuable organs inside.

Corpse are delivered by the donkey, up to 1 per day normally arriving at dawn.

Once the donkey’s strike is over, he will come once per day except during Pride/Sun day only if you have at least 1 space free in the morgue and 5 carrots in the box.

There are only 48 possible corpses, which are separated into “tier”.

The corpse is decided at the moment it is dropped from the donkey cart and appear on the ground or in your morgue.

There are a few pre-generated corpse that exist already in the game at the start, the one buried in your graveyard, 2 lone graves around the map and during story event.

Tier and what trigger them

The game is using 4 tier of corpse, progressing through the story will change which tier are “active” and will be part of the list of possible corpses.

The Prayer of Repose will also affect the tier.

Tier 0 (tutorial phase):
From game start, tier 0 is active by default. There are only 3 possible corpse in this tier.

The total amount of skulls is always the same, the 3 corpse are simply different arrangement of which organ get each value.

Tier II
Tier III will start after the 2nd witch burning. When you come back to the inquisitor after you meet it the 1st time, he will ask for firewood (20 units) and flyers (10 units).
When you bring him firewood and flyers, you assist to a witch burning (and he give you a quest to bring silver wine)
The next time you walk into the morgue, Gerry will have a dialogue with you. The dialogue is not required for the new type of corpse to be delivered, but it’s a useful market to know you are now in Tier II

The last one on the list is also the 1st corpse where we can get a “perfect” organ and a dark organ. Each one of those 3R / 5W corpse has 2 of its organs that are precious and should be kept.

I would recommend to bury them somewhere special (so that you can dig them later) or remove those organs and put them in a storage until you can use them.

From this point on, corpses from Tier I and II are possible. Bringing the total possible corpse to 21

Tier III
The week after the 3rd buffet, the inquisitor gives you a new tech to see dark organs.
The corpse from tier I stops being delivered.
One of the corpse types seems to have a typo. Corpse_3_15 should have a brain with 2R 2W, but instead has 1R 1W.

Tier III has the most corpse inside with 18, making the total corpse you can receive to be 33.

Prayer of Repose:
The effect from this sermon is relatively simple, it will allow for corpse from the next tier to be possible.
However, it does not “deactivate” the lowest tier, so it doesn’t improve your odds as much as progressing through the story until the next tier does.

As there are no tier IV, the prayer of Repose has no effects once you are already in Tier III. Once you have the dark organ tech, this prayer is no more useful.

How to maximize your odds to receive a desirable corpse

The goal will generally be to have perfect organs and/or dark organ (as both are the most useful one).

The way to do this is to make sure to unlock Tier 1 and 2 as soon as possible.
Opening the church should be a priority in the early game anyway, but tier 2 is very easy and tend to be forgotten.

It only require firewood and some flyers.

You can also use the Prayer of Repose once this is done to increase your odds. However, I would not recommend this if this will lead to delay the progression to tier 3.
As unlocking the next tier is more efficient to maximize your odds of desired organs. While the prayer doesn’t turn off tier 1, which make “bad” corpse still possible.

If you want to know exactly what organs will be in a corpse, you can use the list below.
https://docs.google.com/spreadsheets/d/1b5U0uxnv6EntIpD70T39gvnL94pZ96hMW6JYhDgX3PQ/edit#gid=475363457It will be possible to know from the total skulls what the 3 organs inside are, but you won’t be able to know exactly which one is which until you remove at least 2.
READ:  Graveyard Keeper: Hosting Excellent Events (Stranger Sins DLC)
That’s all we are sharing today in Graveyard Keeper Corpse Delivery Guide, if you have anything to add, please feel free to leave a comment below, you can also read the original article here, all the credits goes to the original author Fargel_Linellar