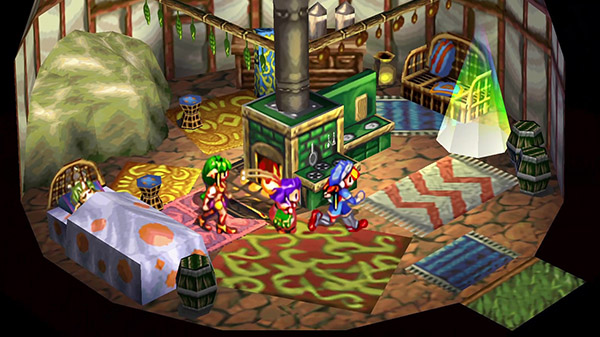 Here is a list of all characters in Grandia game. 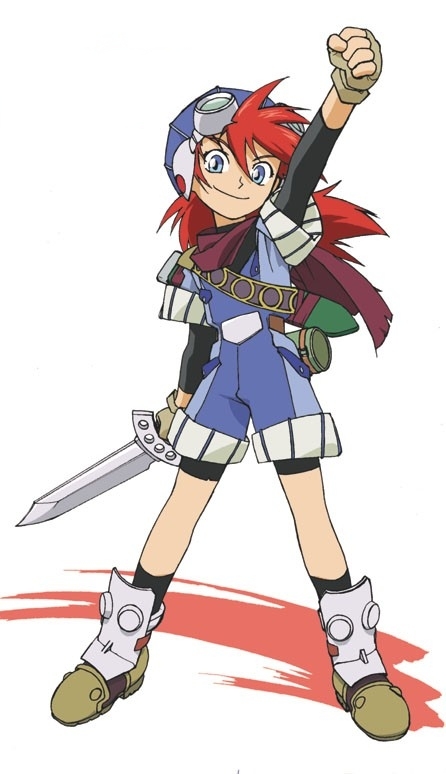 Justin is the main character of our story. Though he is
still a kid, he has the potential to become a strong warrior.
His life-long dream has been to follow in his father’s footsteps
and become the greatest adventurer of all time. His mischievous
and carefree attitude have labeled him as a troublemaker in his
hometown of Parm, and Justin hates the fact that no one wants
to take him seriously. Most of the storyline of Grandia revolves
around Justin’s goal to discover the lost Angelou civilization
by going to a far-away place called Alent. Justin is skilled
at using swords, maces, and axes. 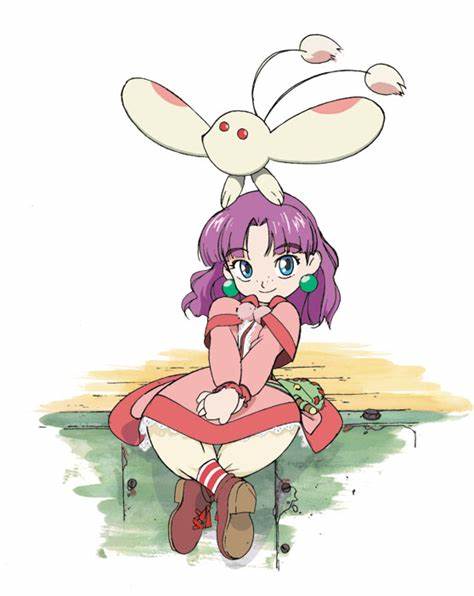 Sue lives in the Town of Parm, right next door from the
Seagull Restauraunt, where Justin lives with his mom Lilly. Sue
and Justin always seem to be together, and though she is even
younger than Justin, she keeps Justin in line. She tries to act
like an adult (and she does a darn good job at it too :P), but
often talks too much and gets on Justin’s nerves. Sue decides
to go with Justin on his great adventure, even though Justin
asks her to stay behind. Sue always takes her pet Puffy along
with her wherever she goes… Puffy usually rides around on
her head. Sue’s is skilled with maces and throwing weapons.
OK, so Puffy isn’t really a character. Puffy is Sue’s
pet… a strange creature that Justin’s father brought back
from one of his adventures. Puffy usually rides around on
Sue’s head, and to most people he looks like a big fluffy
ribbon. Puffy can breathe fire and fly, but not very high.
He also seems to be able to understand the human language,
but the only thing he says is “Puff Puff!” 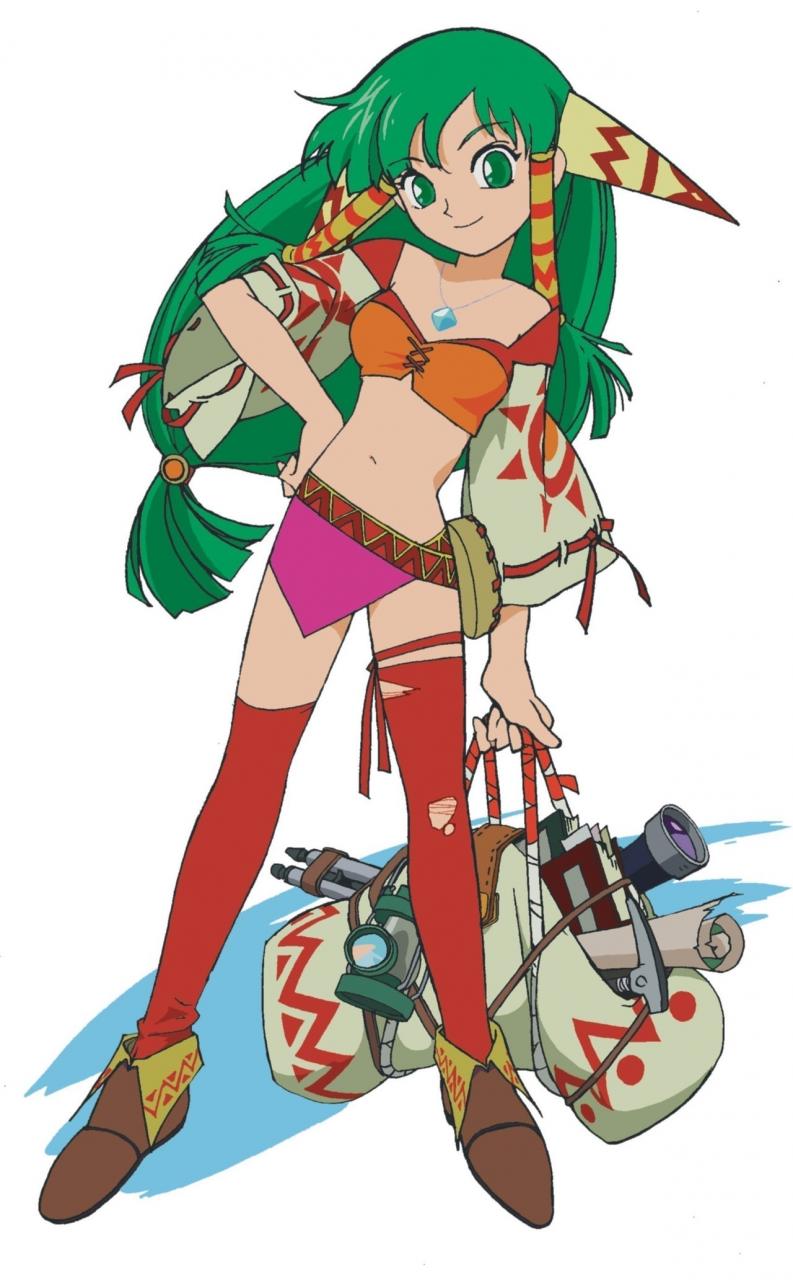 The great adventurer from New Parm, Feena is the most popular
girl in New Parm. She is the top-ranking adventurer at the
New Parm Adventurer’s Society, and not only is she a good
adventurer, she’s cute and a great cook as well (according to
Justin and Sue :P). Justin meets Feena on the Steamer to the
New World, and later Feena decides to go with Justin on his
adventure. Feena’s main weapons are knives and whips. 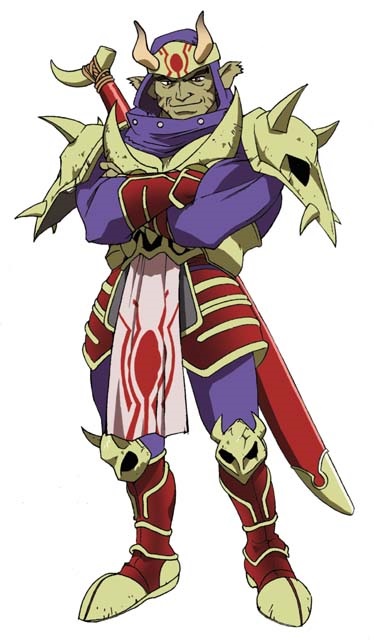 A Knight of Dight Village, Gadwin is a powerful and honorable
man, who follows the ways of a true knight. He is always willing
to help out others, and is willing to lay down his life for his
village. When Justin & company meet up with him, Justin & Gadwin
make a promise to help each other in times of need. After an
incident at Dight Village, Gadwin keeps true to his word and
joins the team to help Justin find the place called Alent.
Gadwin’s weapon is the sword… which he uses with great skill.

Rapp is a hot-blooded youth from the Village of Cafu. He
is the best of hunters, and all the other youths in the village
look up to him. However, Rapp has a tendency to be a bit rude
at times. After a hostile encounter with Justin, an incident
occurs that causes Rapp to realize that they aren’t really
enemies. Rapp joins Justin after Justin & team are exiled
from Cafu Village. Rapp’s weapons are the sword, mace, and
throwing weapon. 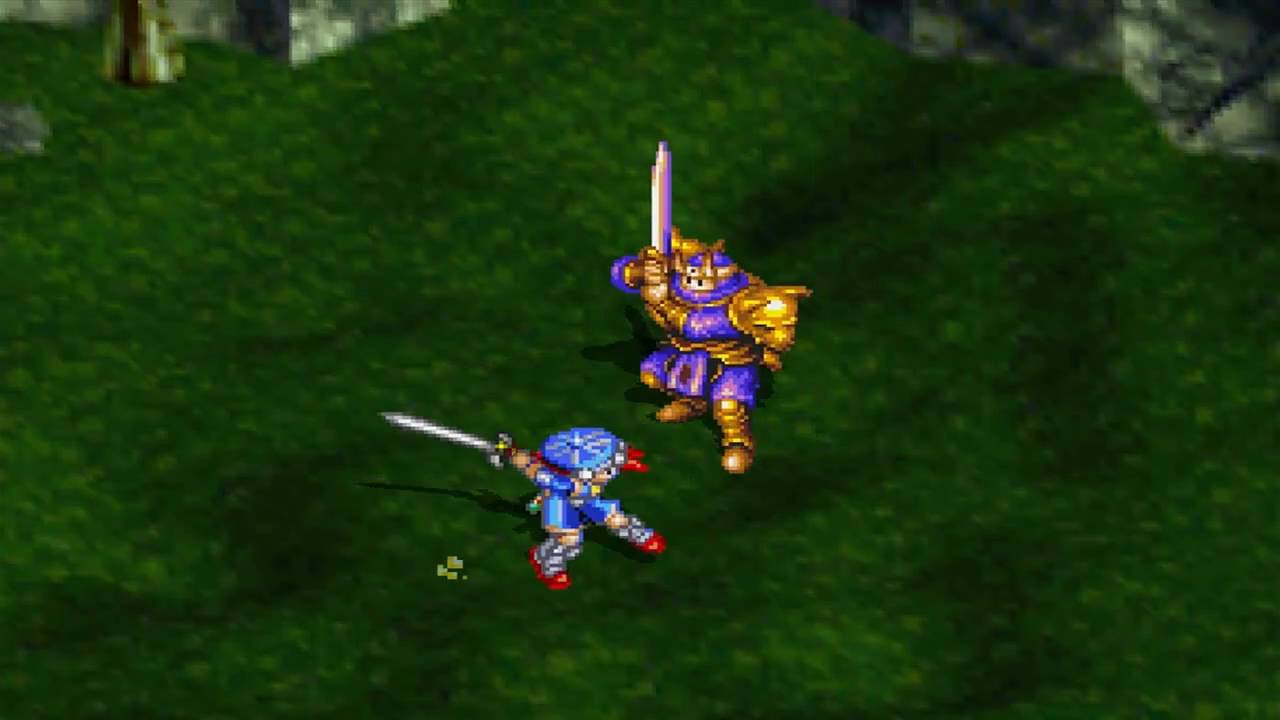 A strong warrior from Laine, Milda fights with her body
instead of her brain. She can’t use magical spells, but her
powerful physical strength more than makes up for it. Justin
meets her at the Tower near Cafu Village, and she joins them
when she realizes they have the same goal. Milda’s weapons
are the sword, mace, and axe. 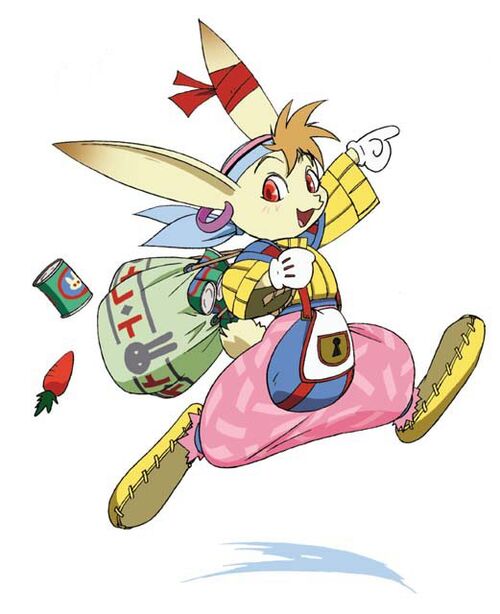 This little rabbit dude with the italian accent is
actually a Mogay, a race that is known to travel around
the world, selling goods. Justin meets up with Guido a few
times during his adventure, and later Guido decides to join
Justin in his quest. Guido, being a merchant by nature, has
a love for money, and he sometimes uses sleazy tricks to get
it. Guido’s weapons are the knife, sword, and throwing weapons. 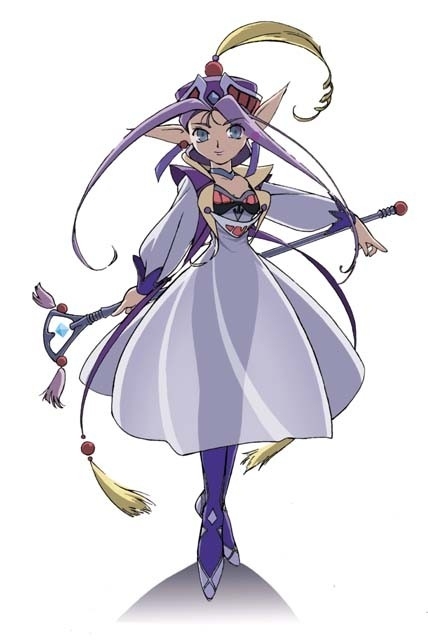 Liete is a mysterious young woman whom Justin meets
at the Sult Ruins. It is Liete that tells Justin about
the Angelou civilization, and that if he wants to know
about it, he should head for a far-off placed called
Alent. Liete is also shrouded in mystery… it is
unknown whether she is actually a person or a spirit
sent by the Angelou. Most of the storyline revolves
around Justin’s quest to meet Liete at Alent. 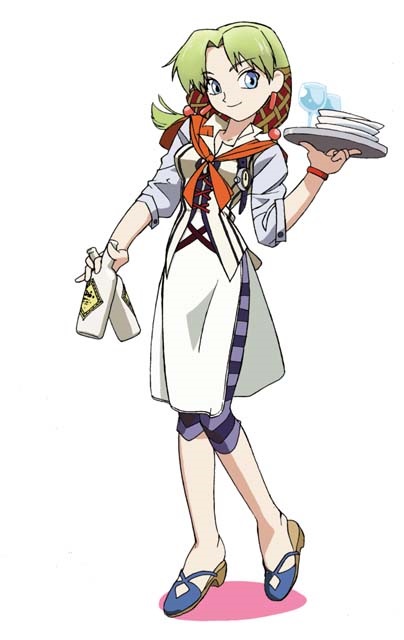 Lilly is Justin’s mother, and she manages the Seagull
Restauraunt in the town of Parm. She is quick to scold
Justin for all the mischief he causes around Parm, but
she actually understands him quite well. She also seems
to know that Justin will one day embark on a great
adventure (hey, he’s the son of a famous adventurer after
all) 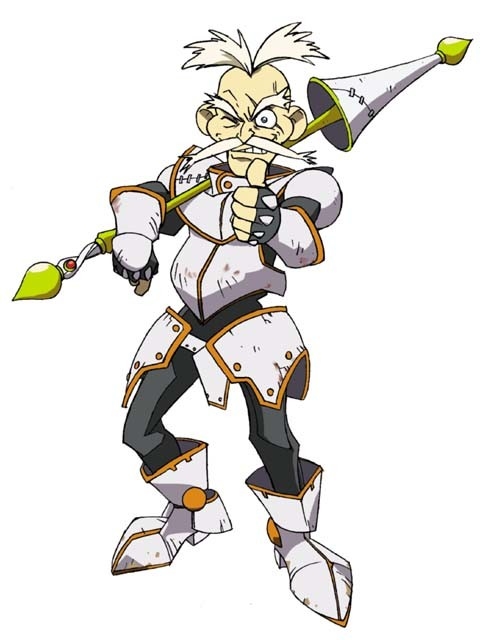 A retired adventurer, but don’t ever let him hear you
say “retired”. He thinks he’s still active, anyway. He
is famous as well, but has grown a little senile in his
old age. Justin meets Java at the Leck Mines, and after
a trial, Java decides to give him his Steamer Pass so
he can get to the New World. 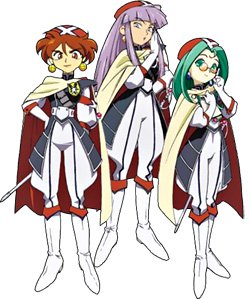 These three are sergeants in the Garlyle Forces, and
boy are they nasty. Most of the soldiers in the army
secretly have crushes on either of these three, but I
don’t see why because their personality isn’t exactly what
you’d expect from such women. These three are hateful
and nasty, bossy, and all want to get as close as they
can to Colonel Mullen. These three will be causing
trouble throughout the game. 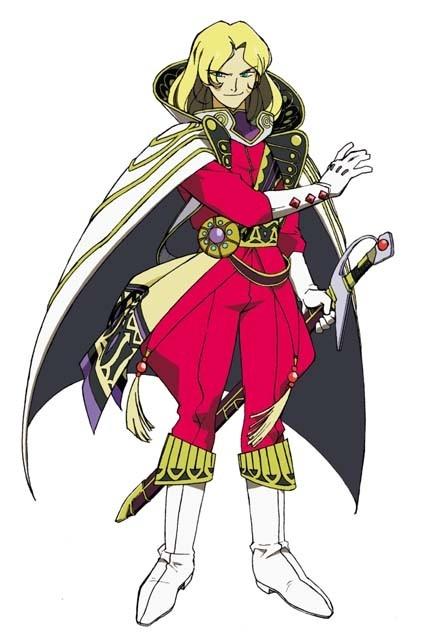 The Colonel of the Garlyle Forces, Mullen is a powerful
man, yet he is quite kind toward his subordinates. Mullen
is the head of operation Yggdrasil to uncover the mystery
of the Angelou Civilization by finding the Spirit Stones,
but it’s quite unclear for what purpose he wishes to use
these for 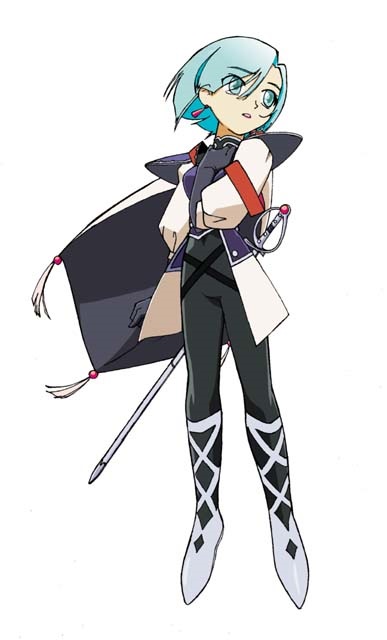 Lieutenant Leen is Mullen’s aide-de-camp, meaning she
is for the most part at his side, taking orders for him and
giving them to everyone else. However, contrary to her
tough appearance, Leen is actually a kind and caring person,
unlike the three sergeants. Leen’s kindness and attractive
looks have also earned her a place in the hearts of most
of the Garlyle soldiers as well 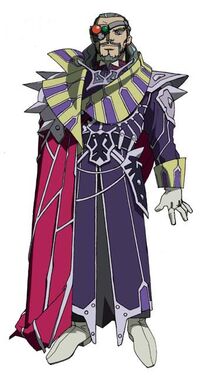 Baal is the supreme commander of the Garlyle Forces,
and he is cloaked in mystery. He is the organizer of
Operation Yggdrasil, and also the father of Colonel Mullen.
Formerly the founder of the Joule Foundation that oversaw
the construction of Parm, Baal has decided to break away
from the Joule Foundation and forge ahead with his own
military plans. He is feared by many, and it is unclear
what he plans to do with the Spirit Stones.