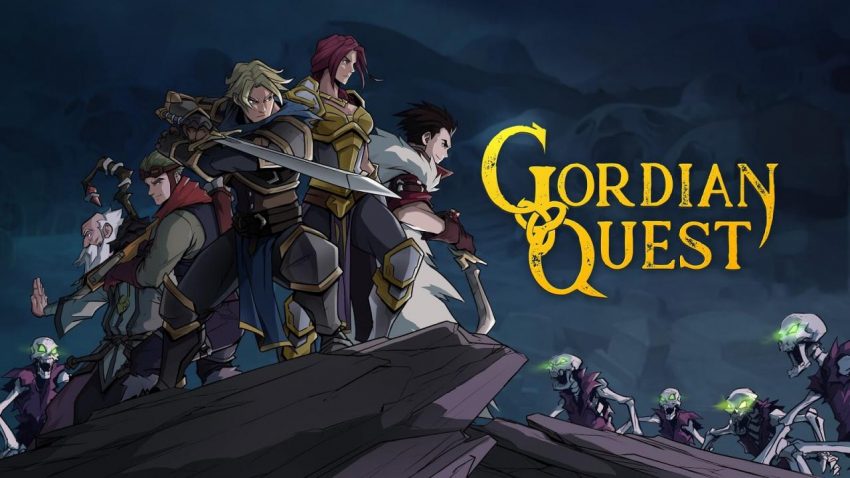 For Gordian Quest players, this guide provides a high damage build for Naran the Bard, that solo clears most boards on Nightmare difficulty on Turn 1. 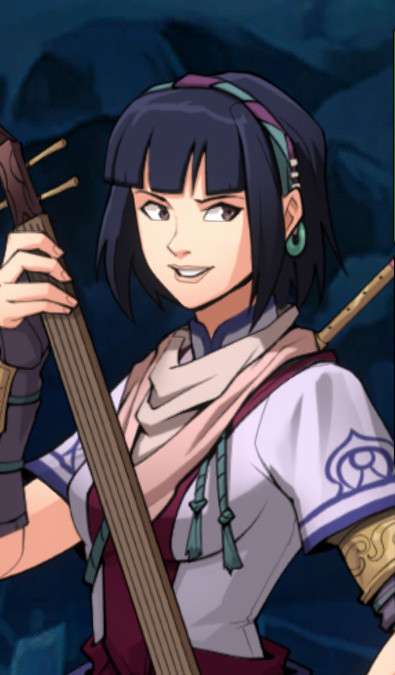 I like bard characters, and wanted to find something spicy to do with Naran.Turns out Naran can routinely turn-one-all-kill entire screens of non-boss enemies on Nightmare difficulty. It takes a while to get her deck set up for the combo, but once you’ve got it she destroys everything.Bangs and a lute = Bags full of loot 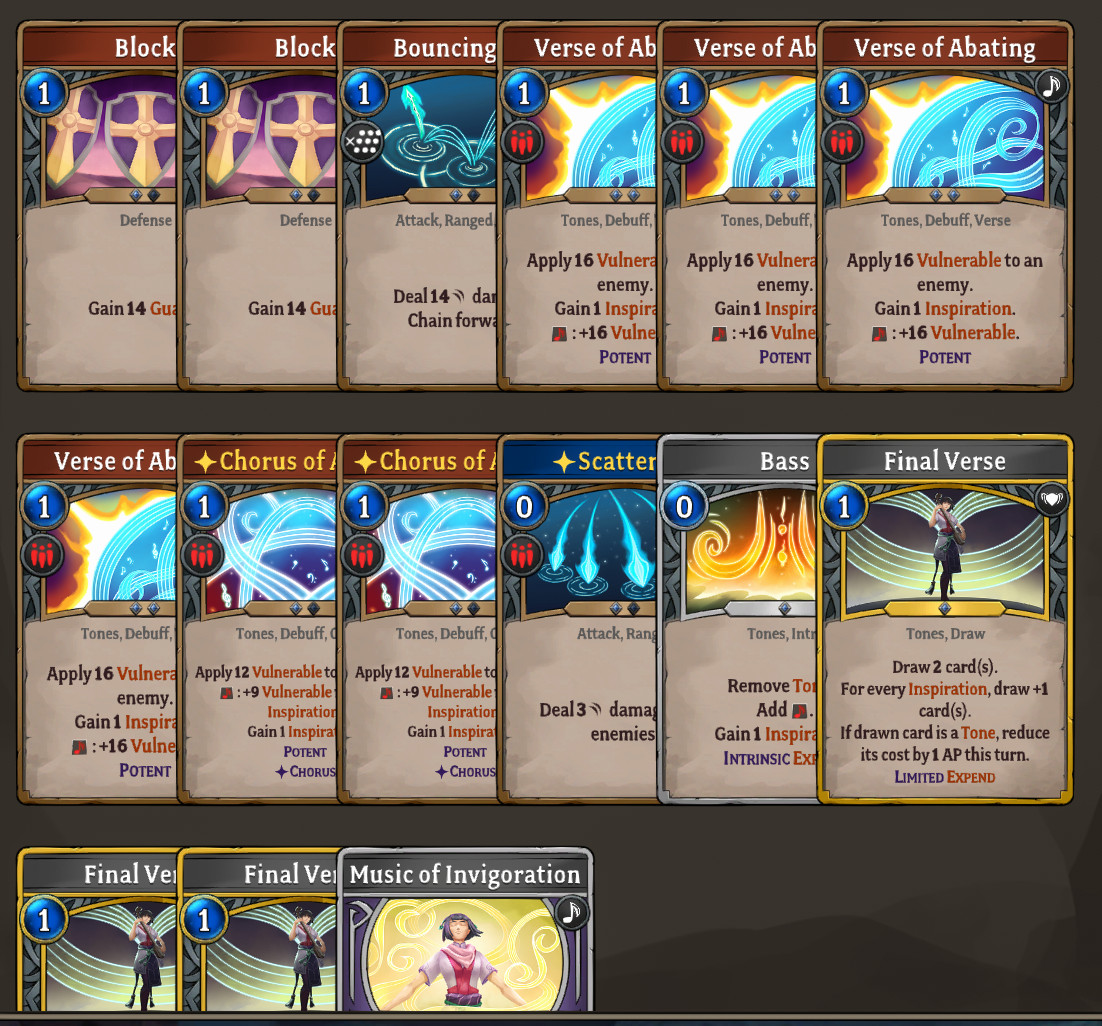 Start Naran as a Troubadour, since all the cards in the deck are Mettle except for Final Verse.

All the cards are critical to the combo except Block and Bouncing Hit, and possibly Music of Invigoration.

You use Verse of Abating and Chorus of Abating (Mastered for Inspiration) to apply Vulnerability. Use Final Verse to keep playing that tune until everything has more Vulnerability than they have HP. Use Scatter Hit (Mastered for -AP) to pop them like bubble wrap in a chipper-shredder. All on Turn 1. Gameplay example below.

I suggest putting one point in Int early on so you can get the Int 12 Talents: they’re real good. Everything else goes into Str. 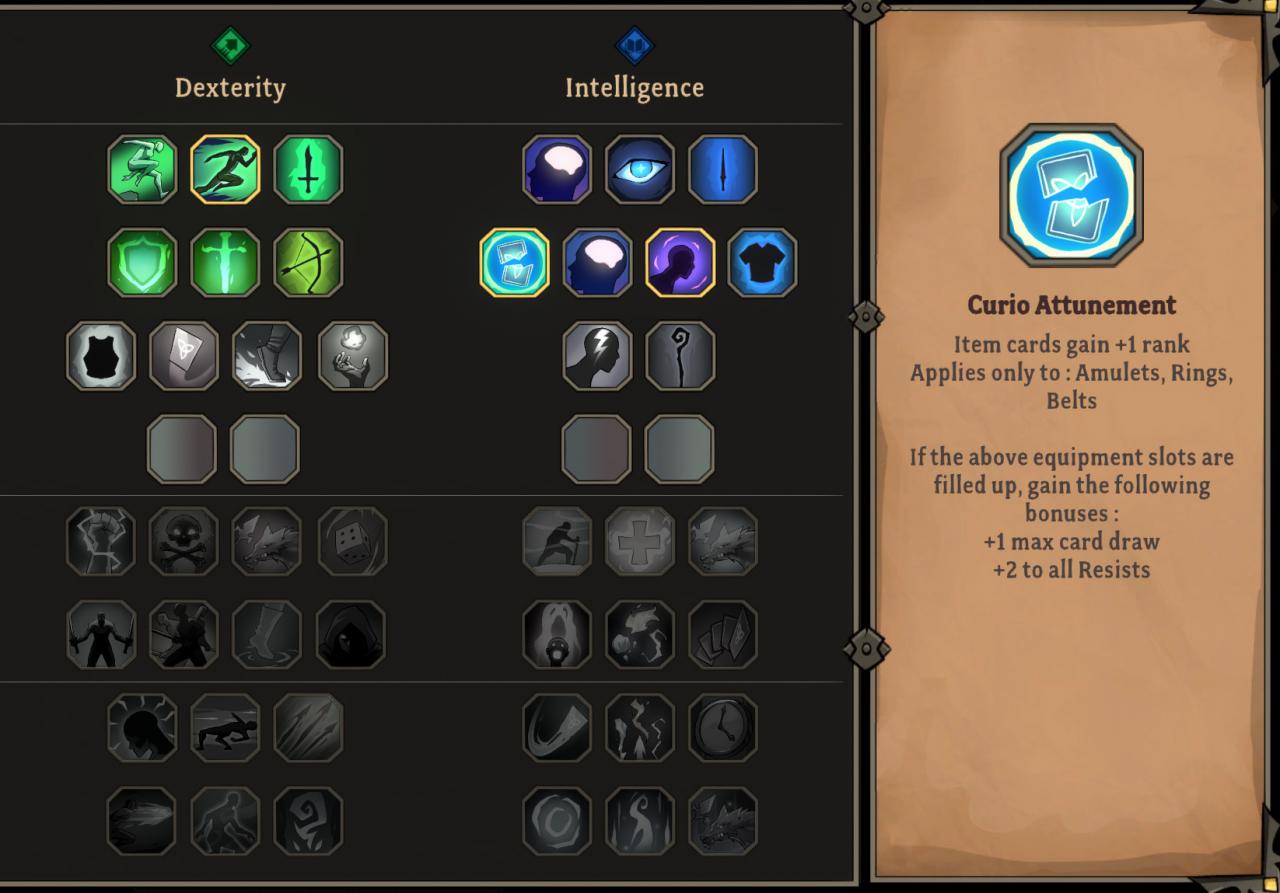 This build wants as big an opening hand as possible, so Curio Attunement at Int 12 is crucial. Strategic Mind is nice early on, but once you’re killing everything on Turn 1 there’s no need to save cards for Turn 2. The Quick Reactions talent at Dex 10 is also good so you can kill everything before they move.

Scatter Hit benefits from Might, so Executioner and Force of Nature in the Str Talents are must-gets as you get into Tier II and Tier III. 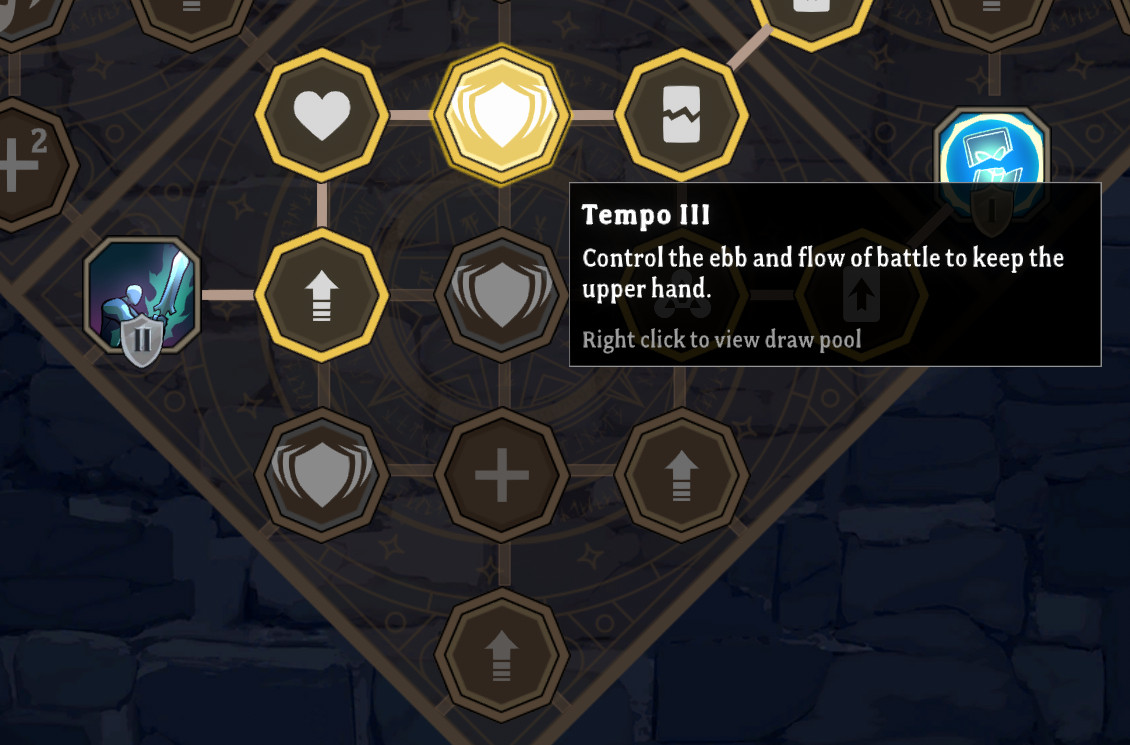 You need Bass from Mettle II, and Music of Invigoration is nice. The crucial gold card is Final Verse from Tempo III. Having one Final Verse is nice but not reliable. Two is way more consistent, and the third copy feels like snapping in the last stone of the infinity gauntlet. You become inevitable.

I grabbed a random bunch of baddies in the desert for this example. I know I’m over-leveled on these dweebs, this is just for demonstration.

As long as you’ve got one copy of Final Verse in your opening hand you’re good, and if there’s three in your deck then all but the worst draws get you there. 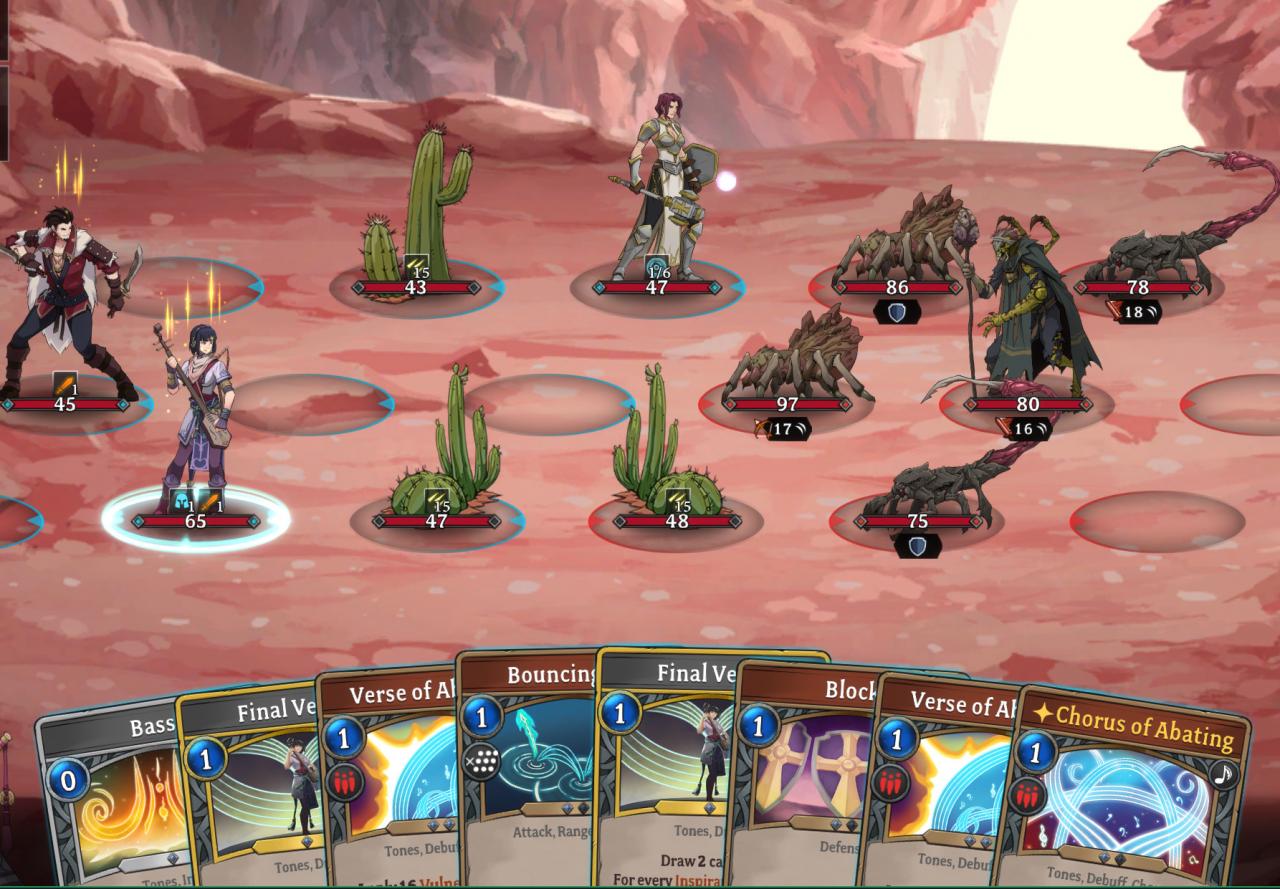 Use Bass to get the Mettle tone and one Inspiration for free. If you have Music of Invigoration in your opening hand you’ll be at 2 Inspiration, otherwise use a Verse of Abating to get to 2 Insp. Play Final Verse to draw more cards; any Tone cards you draw this way cost -1AP.

Use Chorus of Abating (Mastered) to put Vuln on everything and still have 1 Inspiration. Get your Inspiration up as high as you can using the 0AP cards first, and 1AP cards if you have to. Then use another Final Verse.

Kind of brilliantly, Final Verse is a Tone card so it’s possible to chain one Final Verse into another Final Verse for free, which is extremely satisfying. Naran’s got real nimble fingers. 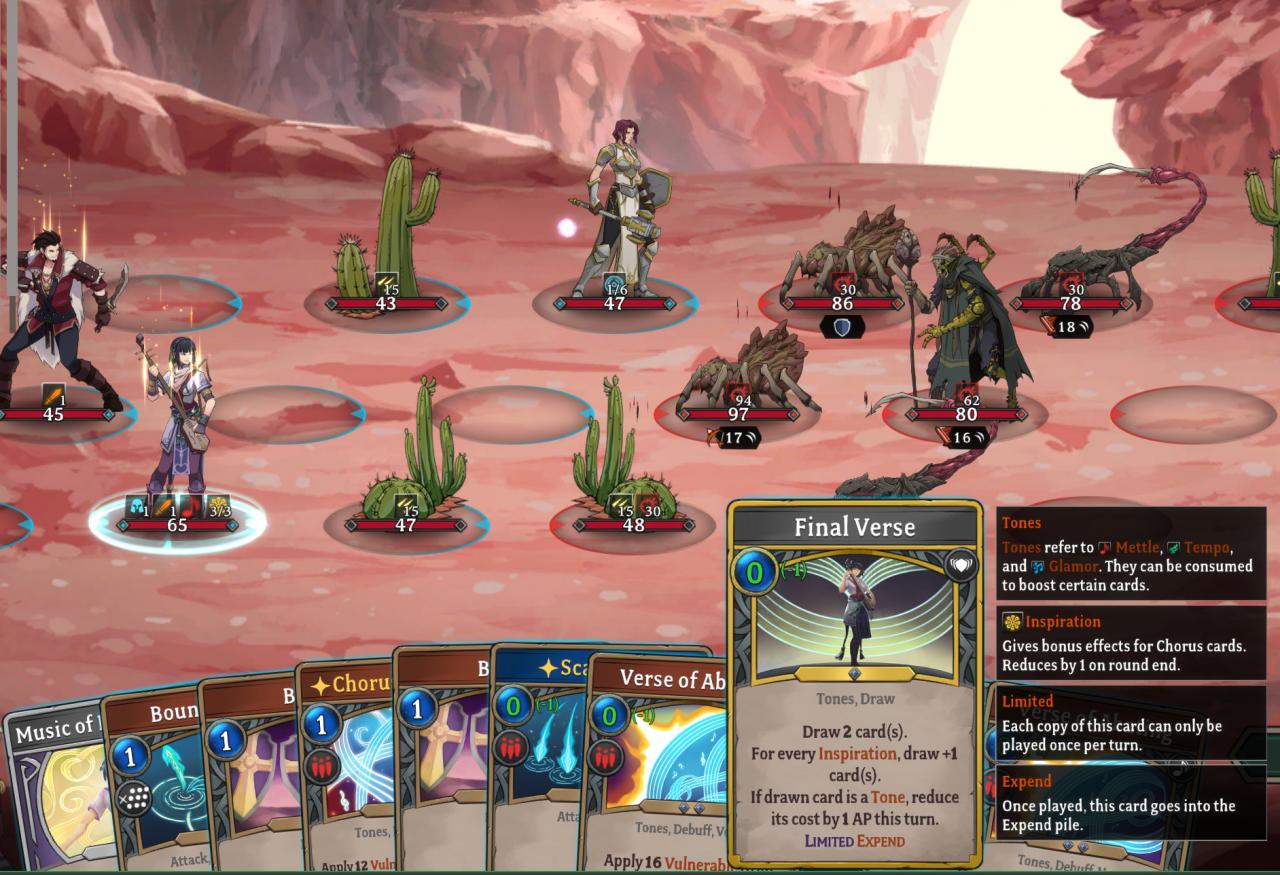 Scatter Hit is not a Tone card, but can be Mastered to cost 0AP. Absolutely do this. You’ll lose like 2 points of damage from the card, but who cares? It triggers all that Vulnerability for 0AP. 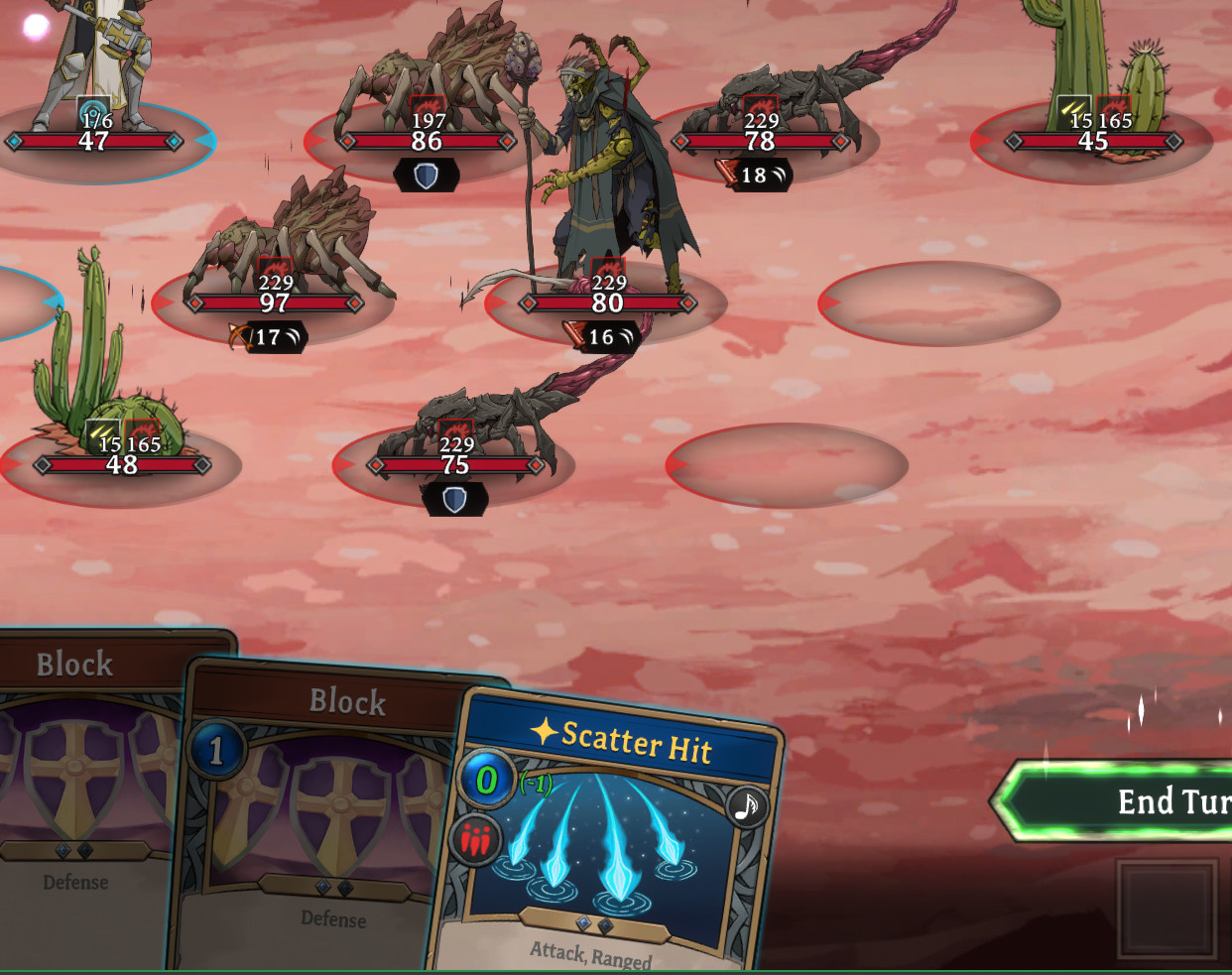 In this last screenshot you can see the power of +60% Might with Scatter Hit against enemies that are weak to physical. Even without the weakness, though, the deck still wrecks. 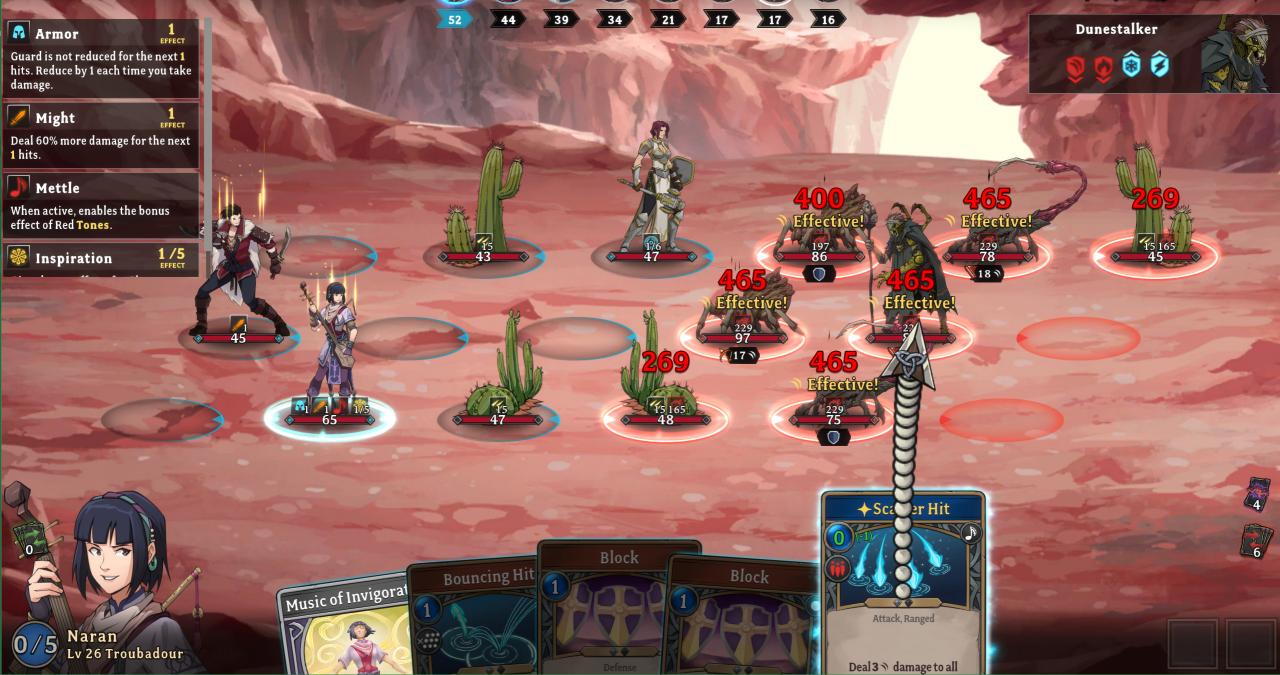 The deck has a LOT of moving parts, and until you get most of the pieces it feels kinda meh. The biggest thresholds are 4AP, Bass, and the second copy of Final Verse. It can run happily on two copies of Bouncing Hit as a team deck, but needs Scatter Hit to clear whole boards solo.

Your respec points go to getting cards from Mettle, but the deck needs Tempo III for the turn one speed boost of Final Verse. Tempo gives you tempo, go figure. #ThankADev

I run four Verse of Abating and two Chorus of Abating. This feels like the right ratio to me, but you’re welcome to mess with it.

I keep a couple Block in case something on the other side of the board has Thorns, but might pull one. If you’re facing enemies that ignore first hits, use Scatter Hit once as early as possible. Good chance you’ll draw it a second time with Final Verse and you can clean up. Or maybe let another character get a hit for once.

The deck is also robust against waves, especially if you save a First Verse instead of using them all on turn one.

There’s tweaking to be done, but this is the core engine. Big shout out to the devs for their constant work. This game is a gem. Being able to put together a deck that’s kind of wobbly right until suddenly it’s a death machine is very satisfying, and I like that the game leans into that. So thanks, devs!

Finally if anyone tries the deck or has suggestions for modification, I’d be curious to hear about it.

That’s all we are sharing today in Valheim Console Commands and Items & Prefab Name List, if you have anything to add, please feel free to leave a comment below, and we’ll see you soon.
Credit to Poknok