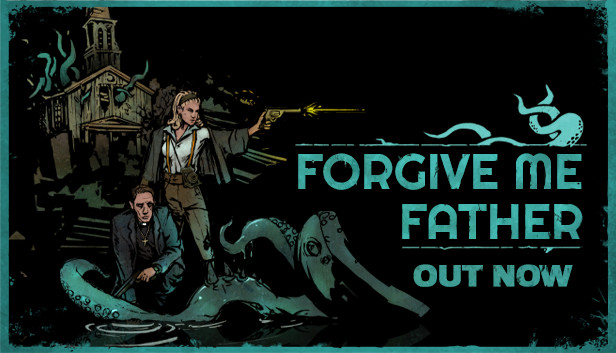 For Forgive Me Father players, this guid will provide you a general overview of the characters and which you feel would fit your playstyle better.

Light: Lantern. Shorter range than the Reporters flashlight but affects a wider area.

Ability 1: Crucifix (3 Charges). The Priest raises a crucifix to heal himself for a small amount of health (20 at start). Takes a second for it to actually heal, so avoid using when surrounded.

Ability 2: Aspergillium (Holy Water, 5 charges). Splashes holy water from a ceremonial aspergillium which stuns enemy for a short while, about 5 seconds at rank 1; has decent range and can hit multiple enemies if they’re in a line.

Ability 3: Necronomicon (2 charges). Provides a few seconds of complete invulnerability, except to falling out of the stage. Rank 1 is 7 seconds but takes one second to cast, so realistically it’s 6 seconds.

Ability 4: Medallion (2 charges). Gives infinite ammo to the Priest for the duration of the ability, 3 seconds at rank 1.

In general, the Reporters abilities are more crowd-control based but have 30s cooldowns in-between uses. Really hurts her since she has the same limitation of needing to gain madness but also working around cooldowns, though she can deal more damage in a short time as the trade-off.

Light: Flashlight. Lights further away but a smaller area.

Ability 1: Sword (2 charges). Summon a sword of golden light which deals high damage per swing and heals you for 10 with every hit. Unfortunately, as cool as this sounds, it’s easily the worst skill in the game since it still requires pinpoint precision when swinging and you oftentimes get hit by enemies when getting close enough to hit them. The skill that actually made me want to make this guide.

Ability 2: Camera (4 charges). Pull up a camera which gives off a bright flash of light and stuns nearby enemies. Wider area covered than the priests Apsergillium, but its range is much worse as well. Also has a 30 second cooldown between uses, which Aspergillium does not have.

Ability 3: Voodoo Doll (3 charges). Brings up a Voodoo doll which causes a small explosion around you, dealing enough damage to kill most weak enemies; good when being cornered. Range is about the same size as an explosive barrel at rank 1.

Ability 4: Cigarettes (2 charges). Lights up a cigarette which slows time for a few seconds for all enemies. Rank 1 lasts about 5 seconds.

That’s all we are sharing today in Forgive Me Father Basic Character Guide (Abilities), if you have anything to add, please feel free to leave a comment below, you can also read the original article here, all the credits goes to the original author Pippin Squinch