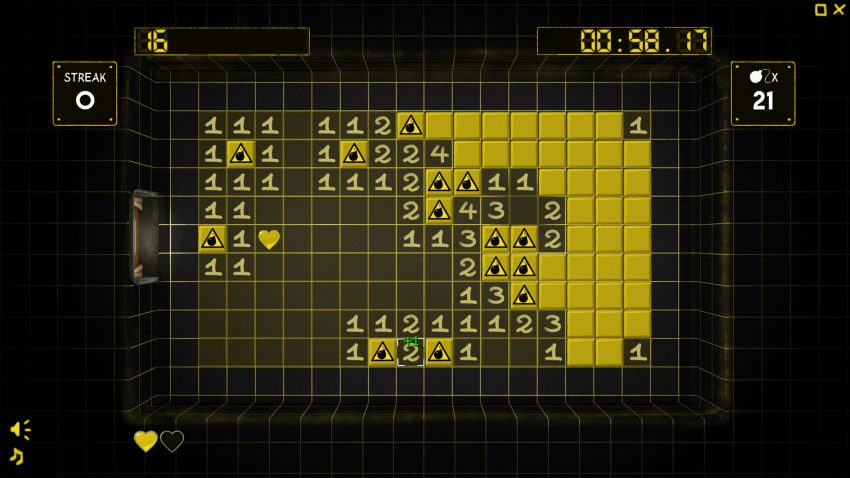 How do you get all the achievements in Fine Sweeper?
Read all the necessary information here 🙂
~ Thanks to High’ whose German translation of Omastar’s guide was all that remained after Omastar apparently disappeared. Whoops! ~

This guide is 100% complete and contains all 19 achievements with explanations (where needed). It is mostly just a direct Google translation of High’s German translation of Omastar’s vanished original guide, with a few minor additions and some correction/re-localization back into English, but the reference listings are my own. If there is a reference I’ve missed, comment it below and it might just get added in!

Start Fine Sweeper and in the main menu you get the achievement.

Achieved when a ‘Custom Game’ has been created.

What Ails You, My Friend?
Pick up a Full Heart Container.
(Reference: Diablo, Deckard Cain’s greeting)

You have to collect a special filled heart container, not black! It is quite rare!

If you already had a higher high score than 100,001 before the update, just start a new level and the achievement will be unlocked.

Just keep restarting the Campaign level 1 with the F2 key until you get it! (Takes about 15-25 attempts on average).
Does not work in ‘Custom Game’!

Collect a total of 113 Hearts between Campaign and Custom Modes.

Keep collecting colorful hearts (and containers as needed) until all 7 heart containers are full!

Step on a total of 5,000 bombs between the Campaign or Custom modes.

Mark (correctly!) a total of 50,000 bombs between the Campaign and Custom Modes.
Note that when you click the last un-mined square on a level, all other squares are automatically flagged and added to your total. Note that it is also possible to create a large Custom game in which all but 2 squares are mined, and the first click is always an empty space…

Need 4 Sweep
Make it to level 7 in less than 1 minute.
(Reference: Need 4 Speed)

Complete the first 6 levels in under a minute. After a little practice, this is relatively easy to achieve.

Fine Keeper
Reach level 10 without picking up anything.

Complete levels 1-9 without picking up any hearts!

Class of ’92
Achieve level 10 without mistakes.
(Reference: Windows 3.1 era, and possibly the football documentary of the same title)

Complete levels 1-9 without stepping on a single bomb.

Finish level 9 in the Campaign.

Finish level 19 in the Campaign.

Finish level 29 in the Campaign.

Finish level 39 in the Campaign.

Finish level 50 in the Campaign.

A Pixel’s Prophecy
Try to cheat!

In a level, type as follows: xyzzy, then Shift + Enter. This was a cheat code in the early Windows 3.1 version of Minesweeper (thx to user 7_of_9 for pointing this out in an earlier incarnation of this guide!)

Up, up…
Expert Mode unlocked.
(Reference: every Konami game ever)

To unlock the expert mode you have to enter the Konami code in the main menu. This is (arrow keys): Up, Up, Down, Down, Left, Right, Left, Right, B, A, Enter