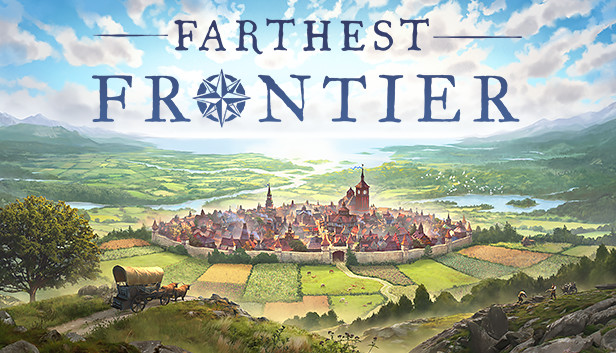 For Farthest Frontier players, this is a detailed field and farming guide, since fields are quite complex, hope this guide will help you out.

Create fields
Use “f” to select fertility.
If possible, build a field in the green (or even better dark green) areas.
A guide value around 60-70 is a good starting value for a field. “Start value” because fertility will decrease over time. We will come to that later when it comes to the seed.
A field size of 5×10 or 6×12 has proven itself for me. 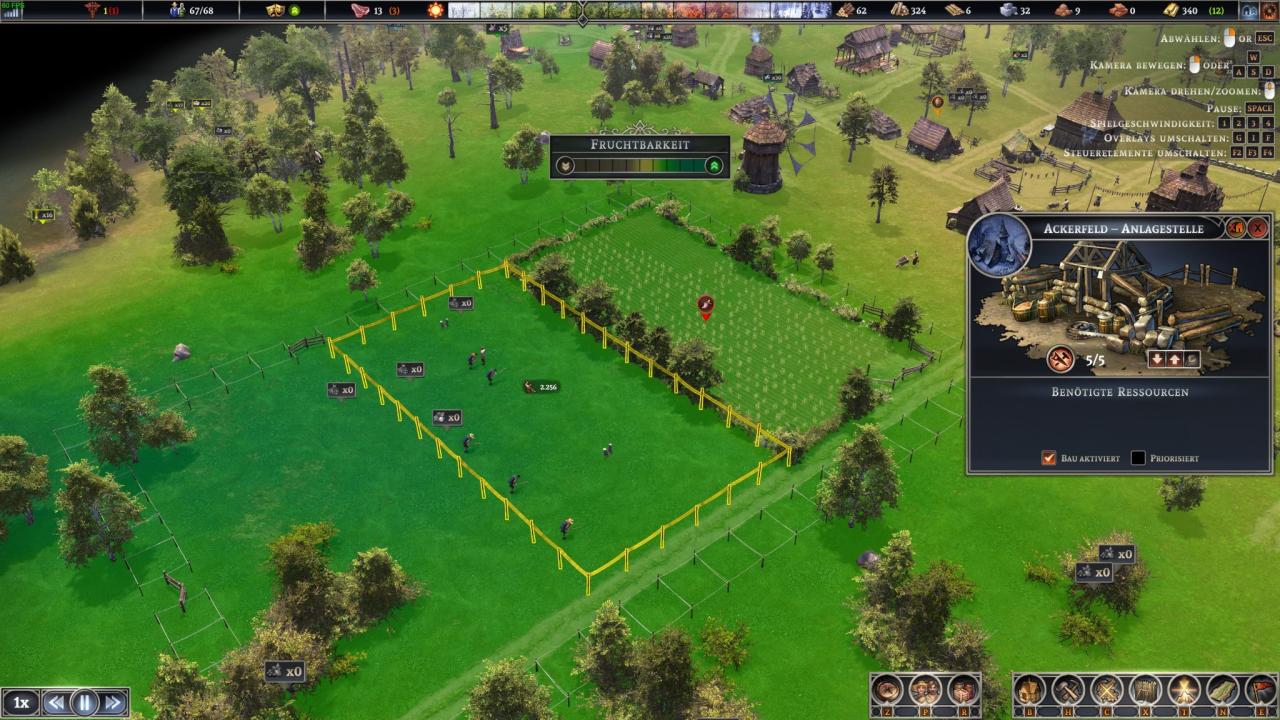 Fields detail view
When the field is finished you will get a message: “Crops ready to plant”.
Click on the field and you get a pretty detailed view. Farthest Frontier gives you a fairly complex field editor. There is no such thing as simply selecting seeds and harvesting them. There are a few things to note here! 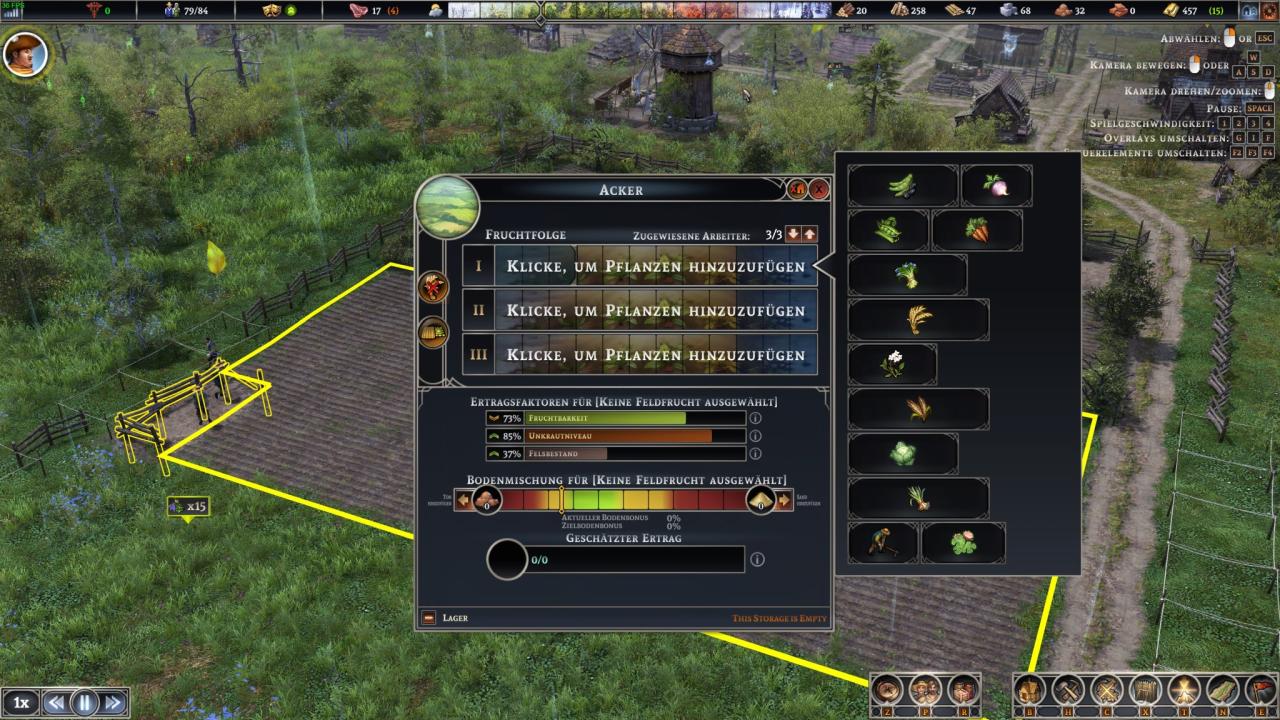 Cultivation season
You see three lines (I, II and III) there, these are the field plans for the next 3 years.
The game calls this “growing season”. Each growing season can (and should!) have different seeds and growing schedules.
The top line stands for the current year, the next line below and the third line defines the field planning for the year after next.
You have to maintain all three lines, otherwise you will get the message that the message: “There is at least one free growing season in this field”.
In the top line you can also see that it applies to this year – an ad runs from left to right – you cannot add anything in the past.Field info
Below the rows for the growing season you will find the information about fertility, weed levels and rock cover. Below that there is a scale for the soil mix.Fertility indicator
The fertility row is important for many crops, especially cereals. There are veggies that aren’t as dependent for fertility, but you should always strive to keep that value around ~70%. It’s no terrible when the value falls but at some point the value will be so low that it’s hardly worth it for example to grow wheat.

Weed level
The more weed, the worse. There are seeds that are sensitive to weeds and some that even suppress them. But you should always keep weed levels as low as possible.
Maintain the field. You can maintain the fields with the “farmer symbol”. If you click on the growing season line you can select the seed. Choose the farmer symbol instead, so that the field is not cultivated but maintained. Although there is no food at this time, it is important to take care of the field as well.

Rock stock
The same thing I wrote about the weed level also applies to the field stand.
The more rocks/stones, the worse. Maintain the field so that it produces more crops.
If the value is high use the “Farmer Symbol” to cultivate the field and reduce the rock stock. Your seed will thank you.

Soil mix
There are crops that like it clayey and some prefer it sandy. You can check if you create a crop for a season and click on it. Just look at the ad.
So far I have not been able to find out how the soil conditions of the field can be checked in advance. Before you produce the field you are virtually blind to the condition of the soil. But you can adjust this later by adding sand or clay.

Field planning
If you click on a season you can choose what to grow on the right.
Hover your mouse over different seeds and you can see different factors.
There is also a good description that summarizes the factors below quite succinctly.Yield
Defines how high the yield is in principle.
High yield = good, low yield = bad. Who would have guessed.Frost tolerance
If the frost tolerance is less than 10, it is best not to grow this plant in winter, otherwise there is a risk of crop losses.

Heat tolerance
If the heat tolerance is less than 10, it is best not to grow this plant in the summer, otherwise there is a risk of crop losses.

Rock Stock Tolerance
If the plant you want to grow shows a low rock tolerance, you should first remove these stones/rocks with the field care (farmer symbol), otherwise there will be a loss of harvest.

Weed suppression
If the plant you want to grow shows low weed suppression, you should first remove the weeds with the field care (farmer symbol), otherwise there will be a loss of harvest.

READ:  Farthest Frontier How to Get More Builders

Growing period
Indicates how fast the plant grows. The faster the better and the more you can get into the field this season.

Effects on fertility
This is an important point. If not the most important. Pay attention to how differently some plants show their effects. There are exactly 3 plants that increase fertility:

Beans and peas provide additional food and increase fertility.
Therefore, this should always be included in at least one of the three growing seasons. The two produce ~2% fertility.
Clover even produces ~5% fertility, but clover is not food. However, you should grow clover from time to time to restore fertility to a good level.
You can also use fertilizer from the compost heap. If this has a full storage, you can use this full container and distribute it on a field. However, this will not take effect until next year. So it makes sense to check your composting sites at the end of the year.

Fertility addiction
This indicates how important fertility is for some crops. Leeks, cabbage and wheat, for example, give high yields – but are very dependent on fertility.
So it’s no use if you only have ~40% fertility and then want to grow those crops.

Field order
The first year you should only do care (the farmer symbol at the bottom left) so that the weed level and the rock stock are reduced.
There are many different factors involved in planning the second season.
If you have built a field on slightly less fertile soil, you should plant clover first, this increases fertility by ~5%. Otherwise, it is advisable to grow beans or peas first.
Here is my “first” field cultivation sequence. 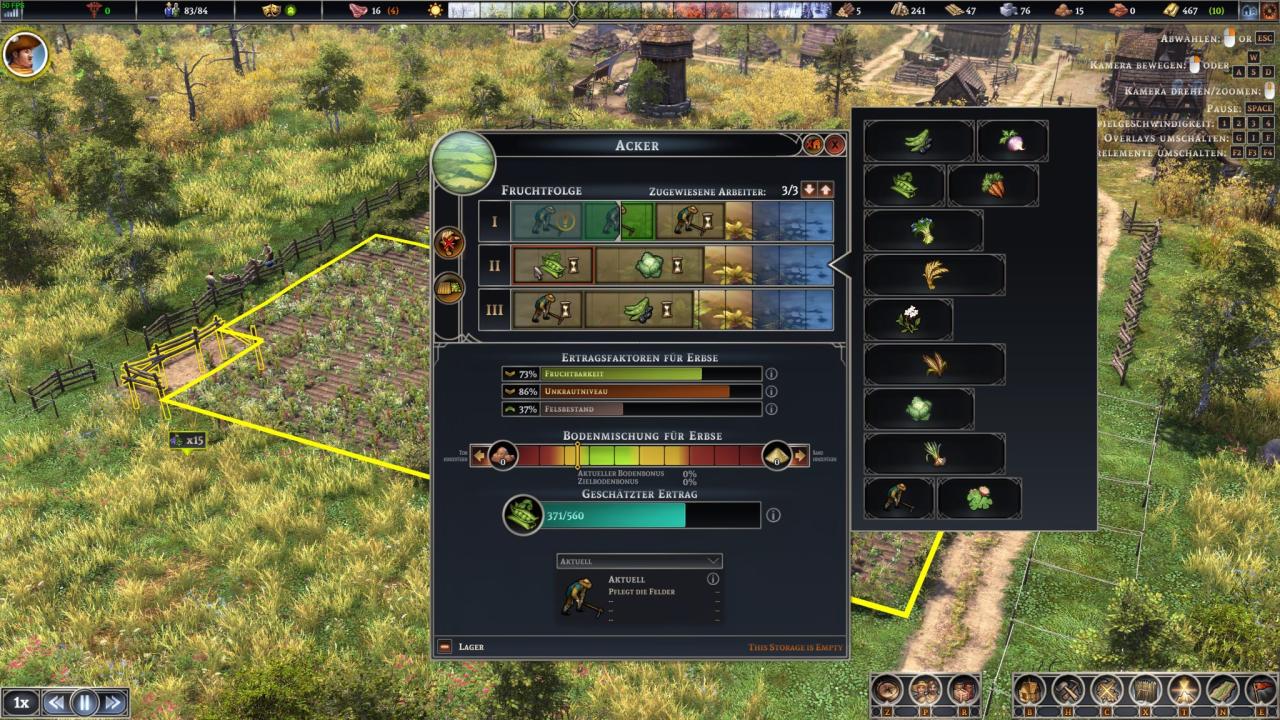 Seed selection
To sow a seed, select a season and click on the crop.
This then appears in the bar of the current season that you have previously selected.
You can then move the cultivation within the season. If clicking on the fruit doesn’t do anything, it may be because it would take longer to grow than you would have space within the season. As an example, you cannot grow wheat twice, it simply takes too long to grow in one season.Remove seed
If you made a mistake or want to sow something else, select the crop you want to remove from the season bar. If this is marked, you can use the left button (on the side) “Remove selected fruit” to remove the seed.Note the seasons
Make sure to only place crops in season where they are resistant.
For example, you can plant peas first thing in spring, but beans are better planted in summer!
READ:  Farthest Frontier Extended Camera Mod Guide

Tips for fields
Otherwise, I can say that if you already own “heavy tools”, anything that can be processed into flour (wheat, rye, buckwheat) is a good choice – because the mill can then be used to produce flour, which can be used in the bakery ( which incidentally also creates attractiveness values ​​in the city) is baked into bread. Bread is a pretty good food source.

But that should also be the somewhat more distant goal. Because if you only grow wheat or something similar, you have fields with an extremely bad fertility value – and that faster than you can see.
Additionally, wheat requires good fertility stats as described above.

Consider fertility when growing!!!
You should always bear in mind that crops are planted in the three cultivation seasons in such a way that fertility does not fall constantly over the years.
Grow clover, beans, or peas before or after growing wheat. This offsets the loss of fertility from growing the wheat.

Fields diseases
From time to time your crops can “sick”. eg. with “powdery mildew, bean wilt” or something similar.
Pay attention to which crops are infected with the disease and grow other crops accordingly. The disease disappears over time.
To prevent diseases you should always grow different crops. Identical crop rotations increase the probability of a field disease enormously.

That’s all we are sharing today in Farthest Frontier Field and Farming Guide, if you have anything to add, please feel free to leave a comment below, you can also read the original article here, all the credits goes to the original author goldlife