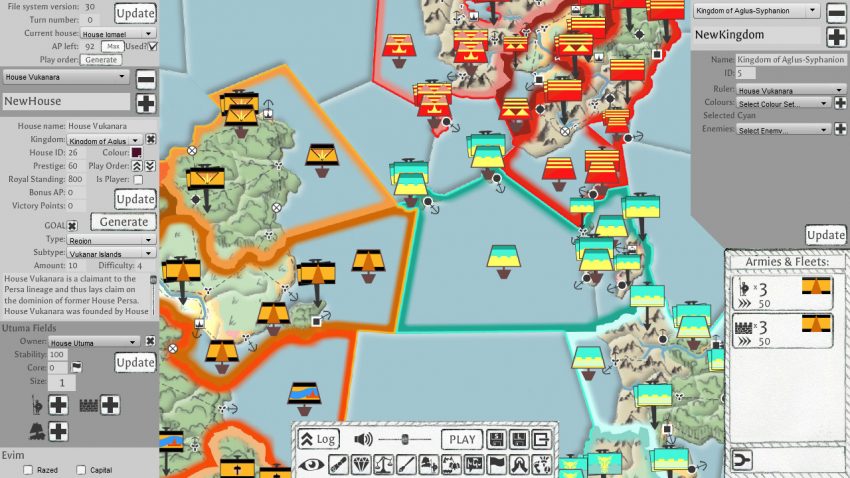 Some pointers for getting started with House Igmael. 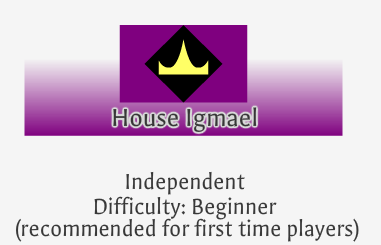 House Igmael is a good house to pick if you are a beginning player still learning the game. The house starts with a large initial number of territories, some of which are very wealthy, which means you have a lot of action points at your disposal, giving you an edge over your immediate neighbours. Nonetheless it can be challenging to keep this large nation in one piece in the early stages of the game. This guide will give some pointers to help you reach your first goals. 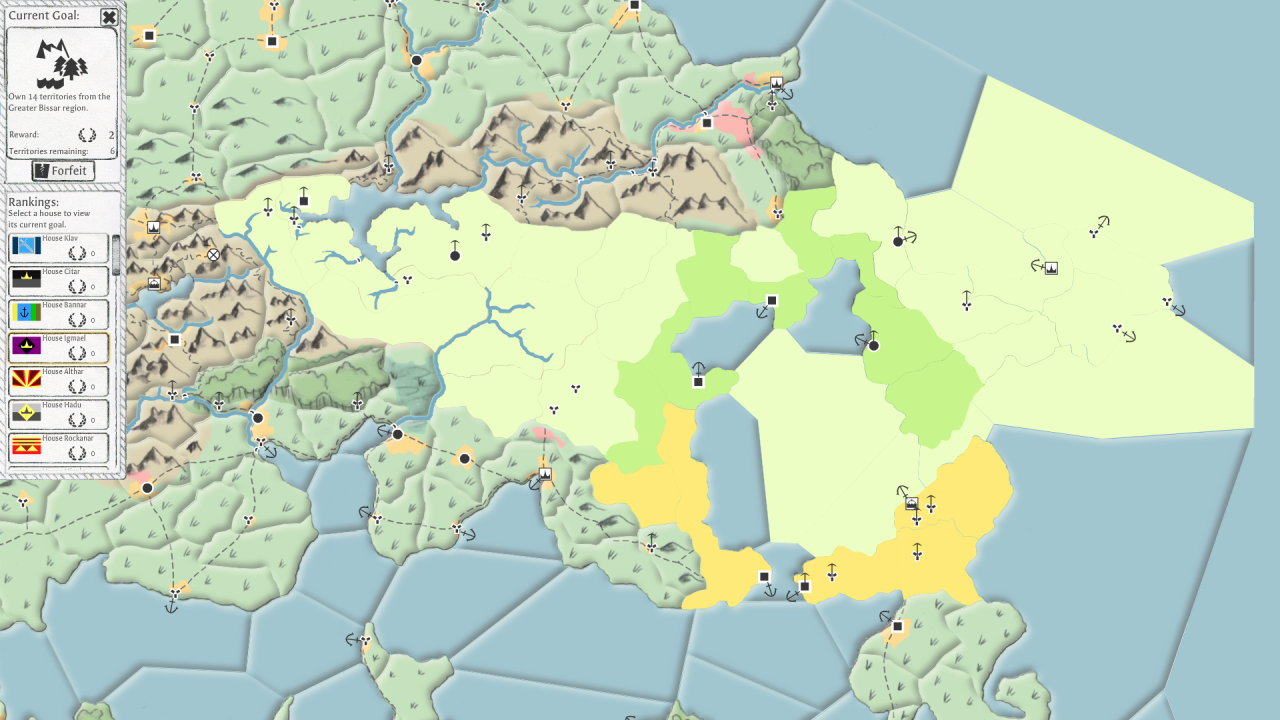 The default first goal for House Igmael is to conquer the Greater Bissar region. the lands surrounding a small sea. This area is at the start occupied by two other houses: Bannar and Dustar. It’s ill advised to try to wage war against both of them at the same time. You will make it easier on yourself if you try to pick them off one-at a time. Why not stock up on units while you are still at peace? 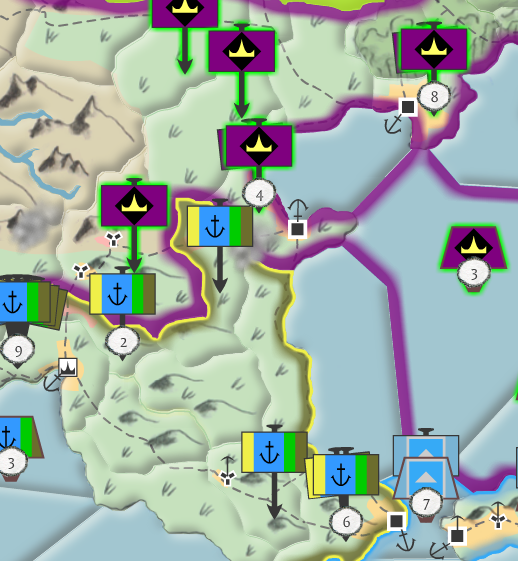 House Bannar will most likely declare war on you in their first turn. If you open the Goals menu and find Bannar in the list of houses it will become apparent why: they have the same goal as you do! This means that every piece of goal territory you conquer they will likely try to take back.

Luckily you have more action points at your disposal than House Bannar so balancing your action points between attacking and recruiting new armies you should be able to push their forces back. Often you will be helped by the Kingdom of Eormor (black/grey colourscheme) who will attack Bannar from the west. At some point Bannar will likely become to small to mount a decent offensive to do you much harm. At that point you can start focusing on House Dustar (if they haven’t forced your hand already). 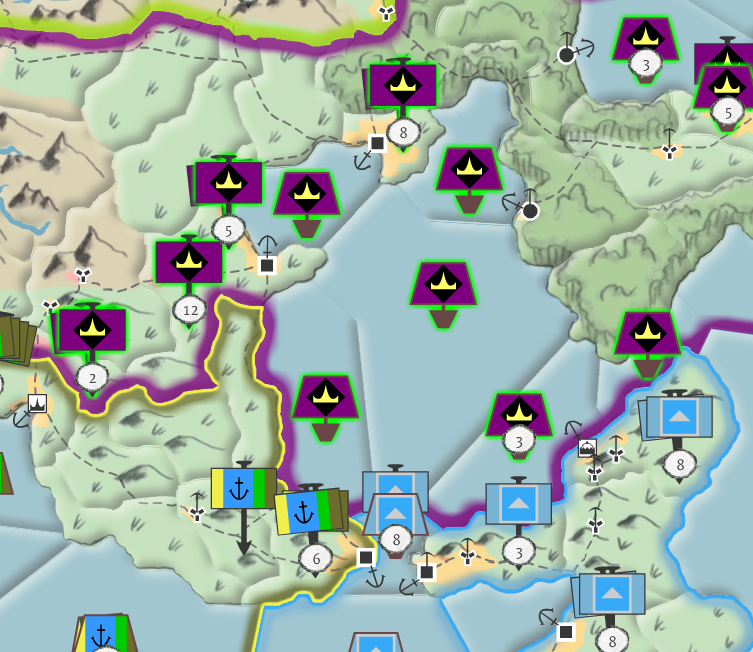 To make it cheaper to move your units around, specifically from your capital to the territories you need to conquer for your first goal it’s worth while to occupy all the water territories in the Sea of Bissar with your fleets, armies can traverse these territories and movement over water is often cheaper than over sea. Do keep in mind that attacking from water to land gives a negative combat modifier.

The Kingdom of Eormor will also very likely attack your western territories. Defending those is expensive because you need your units in the south east for your goal and moving units through the mountains costs lots of action points. Consider just letting them get conquered or even gifting them to prevent war altogether. House Hadu really wants those territories for their goal, so gifting them to House Citarak might just provoke Hadu to leave the kingdom and be a valuable ally later on.

Your northern neighbour, House Balszar will leave you alone at the start as their goals lies to the east. If they manage to reach their goal quickly their next goal might lead them to war with you. If Balszar does badly they might be persuaded to be assimilated with your house in to your own Kingdom of Eormor. 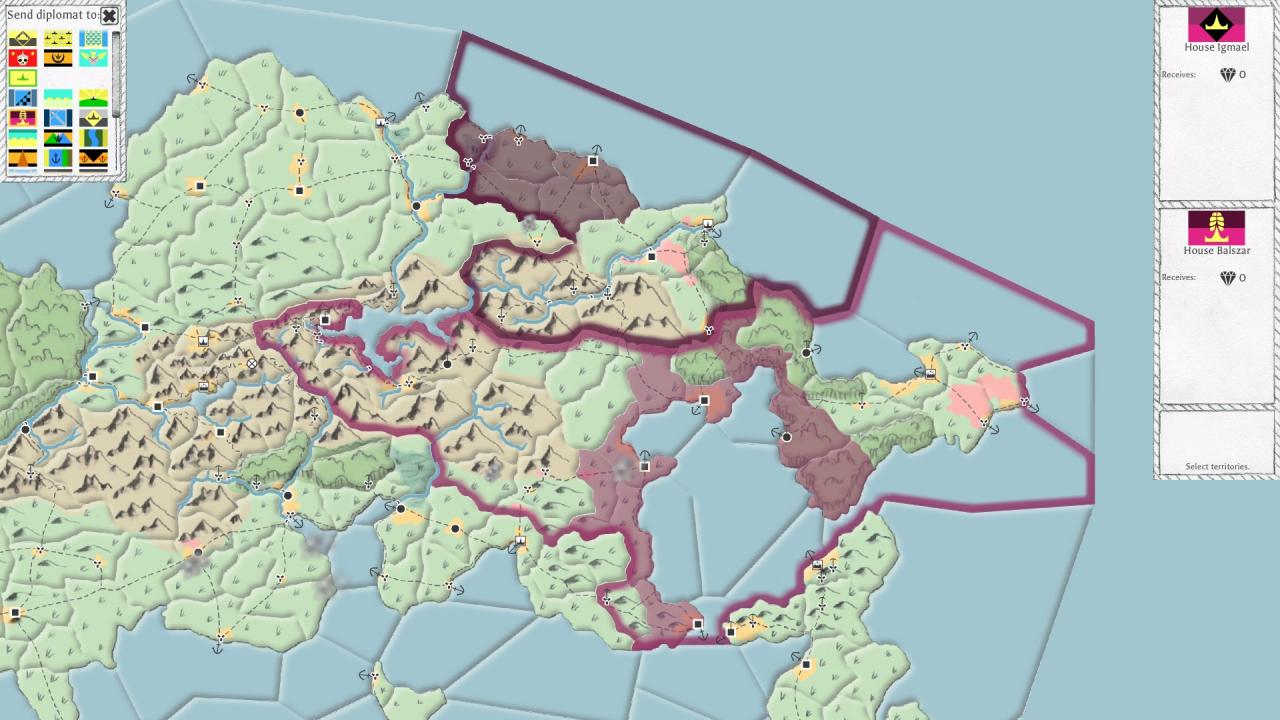 After reaching your first goal

The goals you get to choose from are randomly selected from a pool of valid goals. When picking your next goal, take into account who you are already are at war with and who might be your allies. Trading territories with allies is sometimes possible, but they generally only accept such deals when you offer goal territories they need in return.

Generally you will need to make a choice at this point to go further south (from the Dustar peninsula into the Tarleesh woods) or try to conquer more of Northern Eormor. When going south, the woods are expensive to navigate, but with large armies you can build in Fort Dustar you should be able to push down without much resistance. When staying in the north, the Sea of Solan makes an excellent natural border against enemy attacks from the south, particularly when you maintain a decent fleet. It will help if you manage to form a kingdom with one of your neighbours, otherwise you risk having very long borders which will make it harder to defend your realm. Since your capital city of Igmael is far away it’s recommended to make a city closer to the front line your new capital unless you can conquer one of the few forts (Fort Balszar, Fort Okzo, Fort Citar).

When you get rubbish goals you can always pick one, discard it and get a new (random) set to select from. This does cost a lot of prestige, but when your prestige is low the prestige hit might not matter.