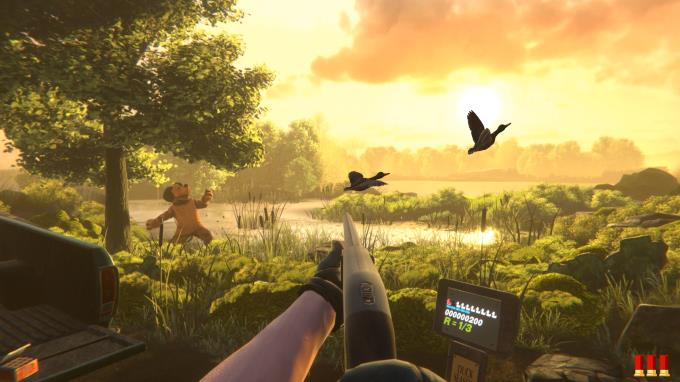 A detailed achievement guide and walkthrough to get you your 100% as quickly and effortlessly as possible. Step by step instructions.

I’m going to list the endings in the order I think is easiest to acquire them in.

Final Fiesta II
Play through the entire game without shooting the dog. I’m unsure if hour skipping allows you to earn no shoot achievements as it didn’t work for the Dog ending, so I suggest doing this as your first playthrough and getting it out of the way.

911 Emergency
Skip to hour 7 by pressing 7 on the keypad. Pick up the phone and press Q to call the police. Make sure to stay on the line for the duration of the call. Afterwards, shoot the dog at least once in the game world.

BackPack
Skip to hour 7 by pressing 7 on the keypad. Enter the game world and shoot the dog at least once. Afterwards, initiate the final battle with him and do not let the TV get destroyed. Back in the real world you will now be able to shoot your gun. Keep an eye out for the dog as he has multiple entry points. Once you see him, shoot him until he dies.

Nuke the Game
Skip to hour 7 by pressing 7 on the keypad. Set your difficulty to easy, then enter the game world. If you look at your ammo boxes you will see a shotgun shell that glows gold. Keep shooting until you load it into the gun where it will then turn gold itself. Aim down sight at the sun and shoot it. I was only able to activate the golden shells after a run where I won the final fight which is why I say to earn this ending now.

Broken Cartridge
Skip to hour 7 by pressing 7 on the keypad. Enter the game world and shoot the dog at least once. Afterwards, initiate the final battle with him and do not let the TV get destroyed. Back in the real world let the dog kill you.

TV
Skip to hour 7 by pressing 7 on the keypad. Enter the game world and shoot the dog at least once. Afterwards, initiate the final battle with him and let the TV get destroyed.

Dog
After earning the 6 other endings, load up a new game+ and play all the way through to the end without shooting the dog (hour skipping doesn’t work.) After earning the Final Fiesta ending again, you will be teleported to the stage area. Go up on stage, and activate the music box by holding E and Q on the handle. Keep winding it until the stage opens up.

Mom!?
Simply pick up a highlighted object by pressing E, then hold E to charge up and toss it at your mother.

Dinner Time
This can be a little finicky to unlock. During hour 5 you will see a stack of silverware on the table next to you. You must toss 2 plates, spoons, knives, and forks onto the table behind the couch and have them all stay on it at one time. I pressed up against the couch as much as I could and aimed at the light above me. Charge the shot about half way and hope the item lands. If you mess up, you can reload the hour by pressing 5 on the numpad.

Duck Champion
Shoot 100 ducks. This will more than likely unlock before you even finish your first playthrough.

Two Ducks One Shot
There will be many chances where 2 ducks line up for a single shot. It’s almost impossible to miss this while going for all 7 endings.

Cat Tails
Shoot every last cattail while inside the game world. You can do this before or during the rounds. Some are a little tough to see so just keep looking around until the achievement unlocks!

Rabbit Season
While in the game world, walk up to the sign in front of you that says “duck season” and shoot it.

Let’s be Friends
Don’t shoot the dog for an entire playthrough. This is required for one of the cartridge games as well as an ending. I suggest doing this on your first playthrough.

Cold Blooded
In the game world will be a passive duck sitting by your feet to the right. Simply shoot it like the monster you are.

Around the Globe
Pick up the globe by pressing E, then hold shift to inspect it.

You’re a Wizard
The Kid Wizard book can be found on the bookshelf to the right of the TV. Most items it can be used on are locked until you earn the endings. The first item you can use it on is the action figure. Simply toss it at him and the achievement will unlock.

Scat Cat
Grab any highlighted item with E, then hold E to charge up your shot and toss the item out the window behind the TV.

Spooky
After earning all the endings, grab the Kid Wizard book and toss it at the computer behind the couch (where your mom sits at one point). You will be teleported into a secret room with every item in the game. Find the Kid Wizard book again and toss it at the giant pumpkin to be teleported into a zombie survival mini game. Keep killing zombies until the achievement unlocks.

In my opinion, this is the hardest achievement in the game simply because the Bros. game can be a little luck based and iffy. There are 9 games total you must beat.

#
Title
Notes
1
Duck Season
Complete the game.
2
Duck Season
Complete the game without shooting the dog.
3
Triple Tiger
To beat this, think of it as rock paper scissors going counter-clockwise. Round 1 and 2, look at the attack your opponent uses and use the next one over. Round 3, use the attack 2 over. Round 4, read his 3 attacks out, then use the counter 1 ahead of the move where his eyes glowed.
4
Ghouls
Slash the ghouls for 3 rounds. Easy peasy.
5
Hover Junkers
Spam the shoot button and the reload button at the same time for the whole game. Turns it into easy mode.
6
Whaling 1842
Don’t spam your harpoons. Simply wait for the whale to breach, shoot it once, repeat. Do this for all the whales until you win.
7
Pizza Boy
This one can be a little annoying. You need to deliver all 15 pizzas to 2 neighborhoods, while not killing anymore than 3 people in the process. You can actually use the pizza toss to knock people out and avoid killing them.
8
Sinatra
Position your character just a little under the enemy models and spam the shoot button. You can damage them, but they can’t damage you.
9
Battle Bros.
This game, in my opinion, is entirely luck based on whether you get a good enemy set up or not. The trick to winning is using every last electric box that makes you invincible.

There are 11 tapes scattered around the game that you must watch to completion.