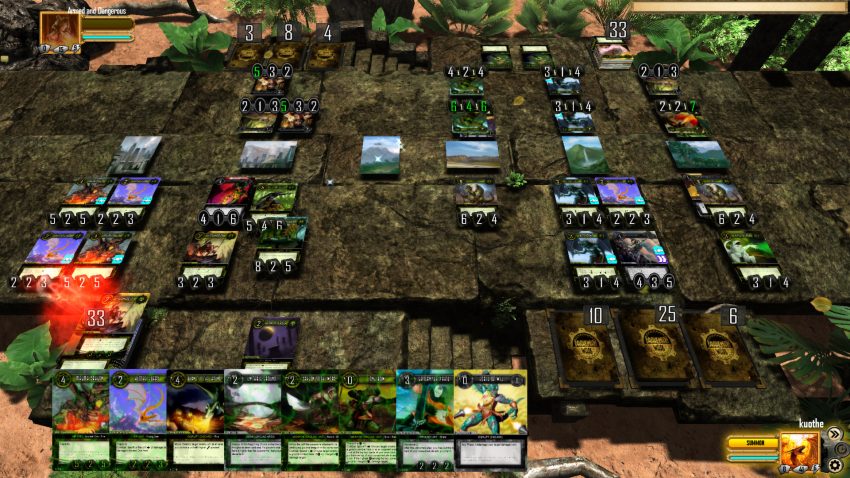 Draconian Wars is a different approach to card games that requires new strategies. This guide shows you 10 common mistakes that you should avoid during your first steps in Hyperborea.

You don’t have to produce your maximum amount each turn. If you need to save some resources for combat fate or other uses, be sure to do so.

If you can’t get combat fate, it’s often not worth deploying guys. You are asking for a beating if you do that too often.

Big deal that your opponent will extract you for 1 next turn. If you don’t have the right hand to deal with that threat, I think it’s better to wait to build up your response instead of going down too early, which could lead to…

I think this is the biggest mistake new players make. If you opponent has someone on the table, and you want to attack them, you need to be sure that the guys you summon can survive a counter beat. What’s a counter beat? Basically it’s an attack that follows an attack that you made. Let’s say the opponent has a Kuothe Worshipper down, and you come at him with a musketeer, a zapper, and an ammunitioneer. You know that in most cases you will force your opponent to lose his guy… but you also need to be aware that you will lose probably one of your guys, leaving you in a position to get beaten down by your opponent on their next turn. Be sure to have enough tricks or guys when you attack so that you can survive whatever your opponent sends your way next turn.

Some cards with triggered abilities, like the Caporal, will do nothing if you summon them before you summon your mindless units. Be sure to summon guys in the right order to get the most out of them.

The disruption breaks in combat are essential to success. A good rule of thumb is to play your abilities and disrupts as LATE as you can. So, if you want to modify combat fate, use your cards during step 1. But if you want to modify Force, it’s better to wait until step 2 so you can see what you both drew for combat fate, etc. It might be better to save that ability for the future. Also, weapons should generally be fired as late as possible (step 3), since you don’t want to give your opponent more damaged units that can soak up combat damage. When you are defending, you can see if your opponent will use “undamage” cards like Force of Will and then after it resolves try to shoot them again.

There are a lot of cards that will mess with tactics… be aware of the tricks that your opponent could be using (depending on their faction) and plan accordingly. For instance, vs. Draconians, you have to be prepared to face Power of Fear, so having only 4 tactics can be painful.

This keyword is tricky since its somewhat rare. How it works is you click the unit with that keyword, then the unit you want to move along with it, and only then click on your destination.

If you aren’t pooling to keep up with your opponent, you will soon be falling behind. I highly recommend pooling the first four turns of the game (until you hit 8) so you can have enough production to try and counter whatever your opponent did during their turn.

Drawing is key to what you can do on future turns. If you don’t have enough cards in hand, you can’t pool or save up for bigger cards. Also, when you have little to no cards in hand, your opponent can spread out and do more damage than usual to you until you get more cards to work with. When planning out your turn, it’s probably wise to be sure that you will have a few resources left over to draw up at the end of your turn.