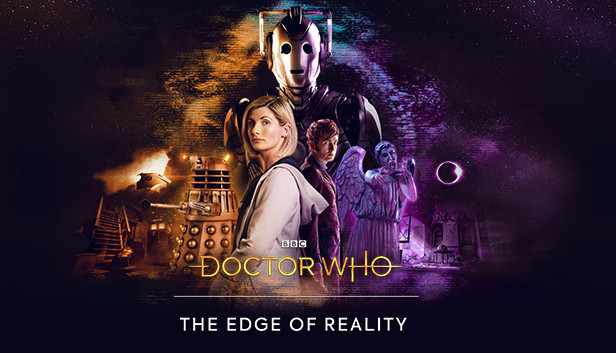 If you are collecting hidden items in Doctor Who: The Edge of Reality, this guide will show you where they can be found, as well as a little bit of detail about the items

Here is a handy guide to help you find your way to all twenty-five collectables that are hidden throughout the levels of The Edge of Reality.

As well as locations, I’ve also given short notes on each collectable – either related to what episode they’re from or their significance to the game. Given that game doesn’t explain them and I’m aware not everyone will have an acute knowledge of all these items offhand – particularly the Roboman helmet and Larry’s phone – I thought it worth doing so.

Without further ado, here’s the guide…

You’ll find five of the twenty-five collectables in the first level.

This ring was often wore by the First Doctor, and was most prominent in the story “The Web Planet” – where he used it to power the TARDIS doors after it had been drained of power by the Animus.

This one should be easy enough. It’s resting against a wall in the Laundromat office, next to this desk.

The Seventh Doctor started using this umbrella from the story “Delta and the Bannermen” onwards, and is considered the most iconic part of his apparel.

When you enter the Reception office, it will be over to your left on a clothes-stand.

The Ninth Doctor wore this jacket through the entirety of his TV run.

After you’ve disabled the Dalek using the magnetic crane (or been crazy enough to just dodge past it), you’ll enter into an assortment of shipping containers. Walk through the open containers until you reach the longest container (This is the container, just before you grab the radio). You should see 2 paths here; one leading through the container and the other going to the right. Take the path to the right, and you’ll come to a small stand where it sits.

The Eleventh Doctor found this to be quite a delightful treat when he was trying out food after his regeneration.

You can find this hidden away on top of a barrel in the I. M. Foreman entrance section with the workbench. The barrel is tucked in the shadows besides one of the doors, and is quite hard to see on the standard brightness – have a ‘feel’ about and you’ll eventually get the interaction option.

Despite his cricket outfit, the Fifth Doctor only played cricket in one story – “Black Orchid” – and even then, it was only because of a case of mistaken identity.

There is a single collectable within the TARDIS – it is first obtainable when you first get into the TARDIS, but can also be obtained in any future TARDIS Interior level if you miss it. (It will reappear, even if you’ve already obtained it.

This one is just sitting on one of the console panels. Should be easy to spot!

The Dhawan Master revealed his deception to the Thirteenth Doctor and her companions with glee, by pulling out a matchbox into which he’d placed the real O. He had tissue-compressed O in such a tiny state. The presence of the matchbox asserts that The Edge of Reality is occurring after Spyfall for the Thirteenth Doctor.

Two more collectables can be found in this level.

Continue walking through the dark forest until you come across the first split path.
The right path will have another campsite and campfire. The guitar will be leaning against a stool. (Whilst you’re here, you’ll also find one of the keys required to activate the lift.)

The Twelfth Doctor eventually came into a habit of playing a guitar. Infamously, his guitar playing including actually playing the theme tune over the opening of “Before The Flood”.

When you reach the second split path, take the left side. The CyberReaper will appear, (and you’ll find another key for the lift) then disappear. Continue following this path and encountering the glimmers of the CyberReaper until you come to a campsite. Here, the hat will be found sat on top of the tent.

Pretty self-explanatory… but did you know that Sylvester McCoy kept his original hat from the TV series and brought it with him to Vancouver so that he could wear it again in the TV Movie for his exit?

To open the bridge door, you need to disable the gravity. When you do so, look up at the ceiling and you’ll see there is a hole leading to an upper section. Float up to this section and look around – the recorder will be floating through the air for you to grab.

The Second Doctor was rarely without his recorder, often playing it whilst captured and once even using it to save the world in “The Three Doctors”

Can’t miss this one – it’ll be in front of you when you come to the entrance of the Zlyster’s chamber.

Worn by the Tenth Doctor when inspecting void particles in “Doomsday”. Perhaps quite a fitting inclusion for a ship that’s been through N-Space and E-Space.

There’s a water fountain in the park, and you’ll find the goblet sitting in front of this.

This goblet was given to the Eighth Doctor as he was dying, in “The Night of the Doctor”. The Sisterhood of Karn had filled it with a potion that would – apparently – help him regenerate. (There’s a caveat to this in a novelisation… No spoilers.)

Rather than taking the small alleyway to get to Grayle’s house, go to the right and you’ll find a main gate. The poster will be on one of the pillar sides of this gate.

Seems the Twelfth Doctor is wanted in Victorian London. A niche joke, I imagine, to the fact that he threatened a tramp in “Deep Breath” to get his coat. Presumably, the tramp notified the police…

Sat on top of a dresser when you go upstairs in Grayle’s house.

Guess Grayle’s been hunting plastic. Not sure which Auton story this is supposed to reference, but I assume “Rose”.

Near to the hand in the same area.

From “The Pyramids of Mars”, this sarcophagus is actually a space-time portal that leads to Sutekh’s burial place in Egypt.

Lvl 5 – Temple of the First

Just one collectable to find in this level.

This is in the starting area of the temple, over to the right of the panel you slide open with the sonic. It’s lying on top of a destroyed pillar.

The Daleks use these helmets in “The Dalek Invasion of Earth”, as part of a process to convert humans into slaves. The process effectively killed those humans and made them Robomen – with the helmet being used for communicating instructions to the Robomen.

Four collectables to keep eyes open for here – three of which are inside the laundromat.

When you arrive in the laundromat, you’ll want to look for a laundry basket to the left of the newspaper holders. Pick it up, and you’ll find the phone sitting underneath it.

It seems that Edge of Reality is before “The Lonely Assassins” for the Thirteenth Doctor… as this phone is a very crucial part of that game’s story. If you play that, you will definitely want to keep your eyes open.

Despite the fakeout in level 4, they are infact together within the office. They’re on a shelf to the left of the electrical power switch.

Has the Eleventh Doctor been in here? Or is this where the Thirteenth Doctor put that fez she ordered from Kerblam? Who knows…

This one is hanging up on a coat rail next to the back door of the laundromat.

Anyone for a jelly baby? This scarf is the first scarf that the Fourth Doctor wore, having pulled it out of the TARDIS wardrobe during his first story. He would later claim to Sarah Jane Smith that it was knitted for him by Madame Nostradamus.

Of all the collectables, this is both the most obvious – and yet easy to miss. After you pick up the head to progress the story in this level, you automatically drop. Just pick it up again to add it to the collection!

Sometimes the obvious answers are right in front of you. It’s no Handles though.

Three more to be found in the Cybership.

Just outside of the bridge where you start, you’ll come to some crates. Look on top of the stacks of crates to your left and you’ll find it.

Good thing it wasn’t switched on. Cybermats first appeared – albeit in a much different design – in “Tomb of the Cybermen”.

When you enter the prison cell room, they’re hanging on the lefthand side railing.

In the cyber-conversion chamber, head towards the back wall. On the right side, you’ll find a single Cyberman and a series of control panels. The Cybergun can be found sitting on top of one of these.

This specific design of Cybergun appeared in the 1980s… and is notable for one story in particular; “Earthshock”. If you know, you know – and of course, the Tenth Doctor does somewhat reference that at a certain point.

After two levels devoid of collectables, the final level contains the remaining two.

When you walk up a little green ramp, take the rightmost path, and you’ll come across it on top of a box.

From the story “Silence in the Library/Forest of the Dead”. You might morbidly ponder which of the poor souls in that story that skull belongs to.

When you get chased up past a little mini-waterfall, you’ll come to a water fountain. Stop here, and you’ll find the fobwatch sitting on the edge of the fountain.

The Master’s or The Doctor’s? Professor Yana or John Smith? You have to wonder…

And with that, you’ll have all twenty-five collectables. The trophies for collecting 5 and 10 collectables will have unlocked at their relevant points… and now you’ll finally get the trophy for collecting them all. Additionally, you’ll be able to view your complete collection of collectables in the miniscope during the TARDIS sequence that follows Lvl 10.

That’s all we are sharing today in Doctor Who: The Edge of Reality Complete Collectables Guide, if you have anything to add, please feel free to leave a comment below, you can also read the original article here, all the credits goes to the original author ManjoumeThunder