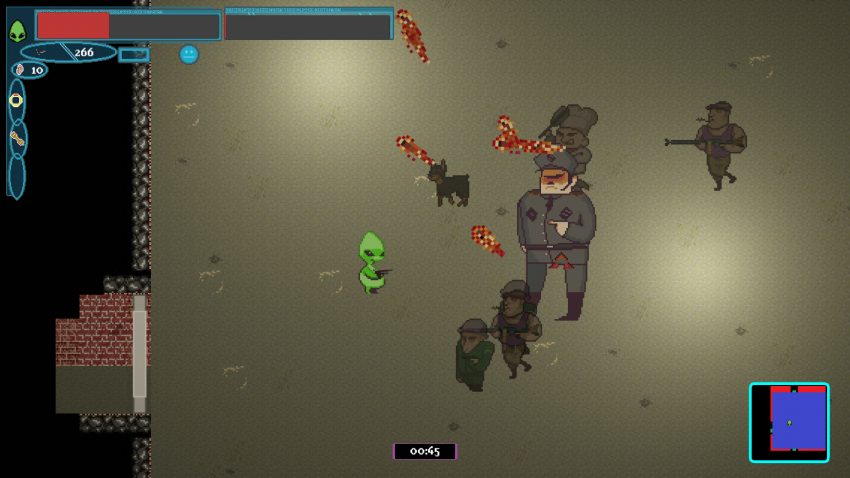 A basic manual for players with some juicy tips

Die Bloody Nazi Die!’s controls system has been designed with a “bare bone” approach in mind. Using them properly will draw the line between a very short run and a game which will give you a lot of satisfaction.
Basic controls:

Cabinets and containers will be the first things you will be able to interact with using “E” key on your Keyboard.
Same command will also be used to open the exit trapdoor once the Key is obtained by defeating the Boss of the level you are in.

Two different kinds of weapons will be available to fight through Die Bloody Nazi Die!’s levels:
Psionic one (racial) and Artifact ones (humans, aliens, esoterics and hand-to-hand combat ).
– Your racial Psionic weapon is basically an energy blast generated and shot by the main character. It can be used endlessly, it doesn’t need ammo, but damages caused are indeed low compared to other weapons.
– Artifact weapons can be found fighting your way through Die Bloody Nazi Die!’s levels. They can be left on the ground by defeated enemies or found even within crates and lockers. These weapons are more powerful if compared to Psionic blast but they need ammo.
Just one weapon at a time can be brought into battle in addition to Psionic racial ability. To select between the two press “R” key on your keyboard.

Plenty of wearable items are available and they can be found inside lockers and containers with a yellow exclamation mark.
You can wear up to three items at a time and you will have to choose which one to discard by pressing , depending on the slot you want to free, keys “1”, “2” or “3” on your keyboard .

SET: the three worn items may compose a set. This option gives you the chance to use special abilities all limited by a cool down system. SET’s special ability automatically activates when designed objects are worn. Press “Mouse 2” button to use SET’s abilities. Keep reading for more info. 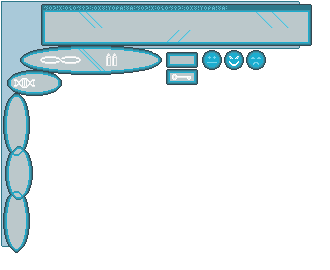 Tips to get the most out Die Bloody Nazi Die!

There are many ways to improve your performance while playing through Die Bloody Nazi Die!
Weapons:

First thing first, you shouldn’t use the weapons you pick-up to destroy stuff in which you may find cures and ammo. Best tactical approach it’s to save ammo and use instead your Psionic blast to destroy boxes and containers.

Talking about weapons, you must always keep in mind there are four different ones: humans, aliens, esoterics and hand-to-hand.

Human weapons can be found here and there in bunker’s first levels. They are the ones causing an overall low rate of damages to enemies.

Alien weapons, given their advanced technology, may easily destroy almost all enemies (say it with me, “almost”!). Especially the ones beaming lasers because their bullets will bounce around the room and have more chances to hit.

Esoteric weapons can be found in bunker’s most advanced levels where things get weird and, of course, they deal a good amount of damages.

Hand-to-hand weapons, from a damage dealing stand point, are the most devastating. As nothing comes for free, these weapons are the most difficult to use. Only skilled players using well developed characters (damage resistance) may be able to wield them properly.

Collectibles are randomly placed across the randomly generated levels. Keep in mind, as said already above, these objects may not seem to be beneficial by them self but, there’s always a “but”, together with others they may build a SET. As explained beforehand, SETs will bring great benefits to your Die Bloody Nazi Die! experience: slowing down enemies, higher damage resistance, super speed, a date with someone you like… (I hardly believe it, sorry!)

When a SET is set (lol), you will get notified by a red banner popping up on screen reporting active SET’s name and, also, the laughing face icon right below your Health Bar will be activated.

You will also have two more faces up there. A neutral facial expression stating collected objects so far are not a SET and, last but not least, a sad facial expression to let you know SET’s special ability is now cooling down.

Along the way you can run into different types of enemies. The most dangerous ones are, after of course the end-of-level Bosses, the Sub-Bosses.

Here below one of them. It may seems peaceful, right?

Mini-Bosses will call an infinite amount of minions to help them fighting. Better not to be distracted or deceived by decoys. Don’t stay still or you are done!
Stay cool: after all it’s a good opportunity to scrape together a good amount of weapons and ammo to continue the adventure!

In your quest to reach the bunker’s deep meanders to (try to) fight the Final Boss, you will have to collect the from all killed enemies.

The amount of collected Ears can be seen up left in the HUD, just below for weapons info box.

The amount of Ears collected directly translates into DNA points. DNA points will be available in the Power-Ups screen.

If you have collected a decent amount of Ears playing through “Die Bloody Nazi Die!”, at the end of the game session, you will have the chance to spend the related DNA points to purchase Power-Ups. Choose wisely. It’s your way to become stronger and stronger to each run.

When starting a new play-through, Ears count will set back to 0 (sorry, no fridge bag available in game) and you will have to collect them up again in order to improve your character.
So, if you can buy Power-Ups, do it right away because Ears won’t pile-up from a play-through to another.

Hot Tip: DNA points required to buy Power-Ups’ Tiers increases after each purchase you make.
So, try to plan your Power-Ups strategy and remember how many Ears you’ll need to do so!