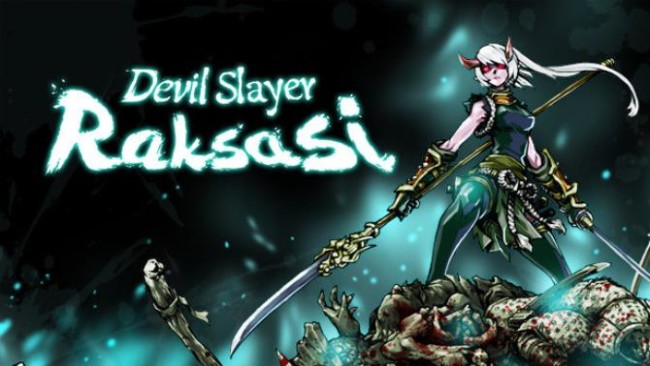 Here is an explanation on the bosses and what are the safest way to deal with them.
This guide contains spoilers for obvious raisons.

The crazed magistrate is a dangerous tall guy. 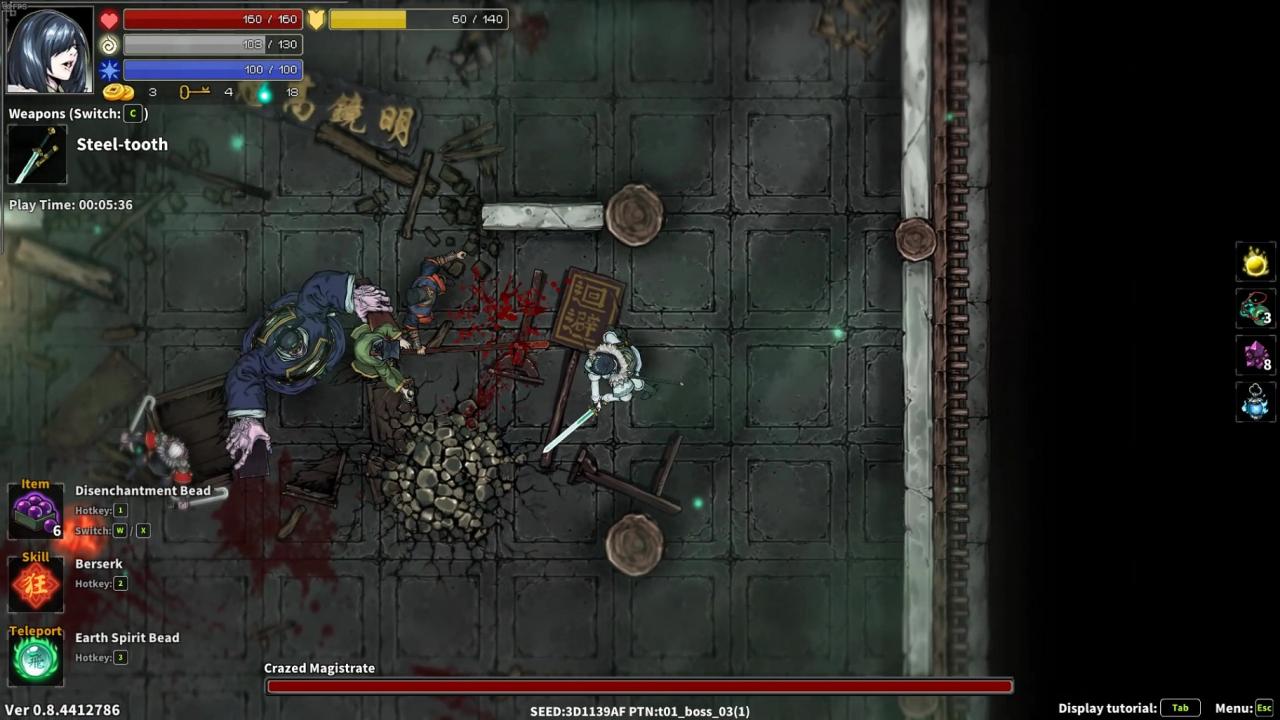 He has 2 assistants to help him in the fight. One of them is healing and buffing him. The other is agressive with a wand.

The crazed magistrate has 3 attacks:

Tactic: This first boss should be straight forward. Kill his assistants to get a easier time dealing with him. Bait his book slam attack so he’ll be vulnerable to any of your attacks.

The Five Oddities is a group of 5 insects, each with their own elementals attacks. 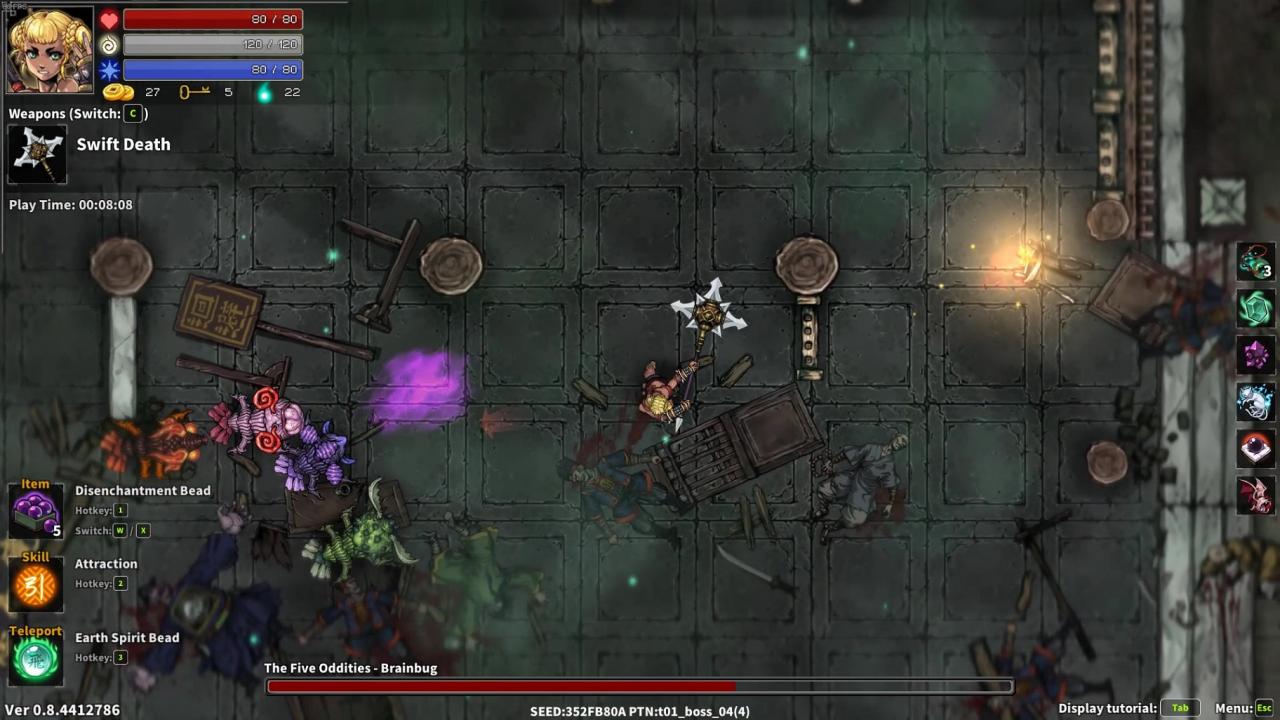 Tactic: Aim at the leader, they’re no reason to kill the other bugs as they respawn quickly. Bait the bugs together in a corner then sprint to attack the leader.

The general Nara is a powerfull general, wielding his sword and riding his horse.

He has 2 phase, on horse and then Nara himself.

Pachi is a big and slow beast. He takes some time to turn. 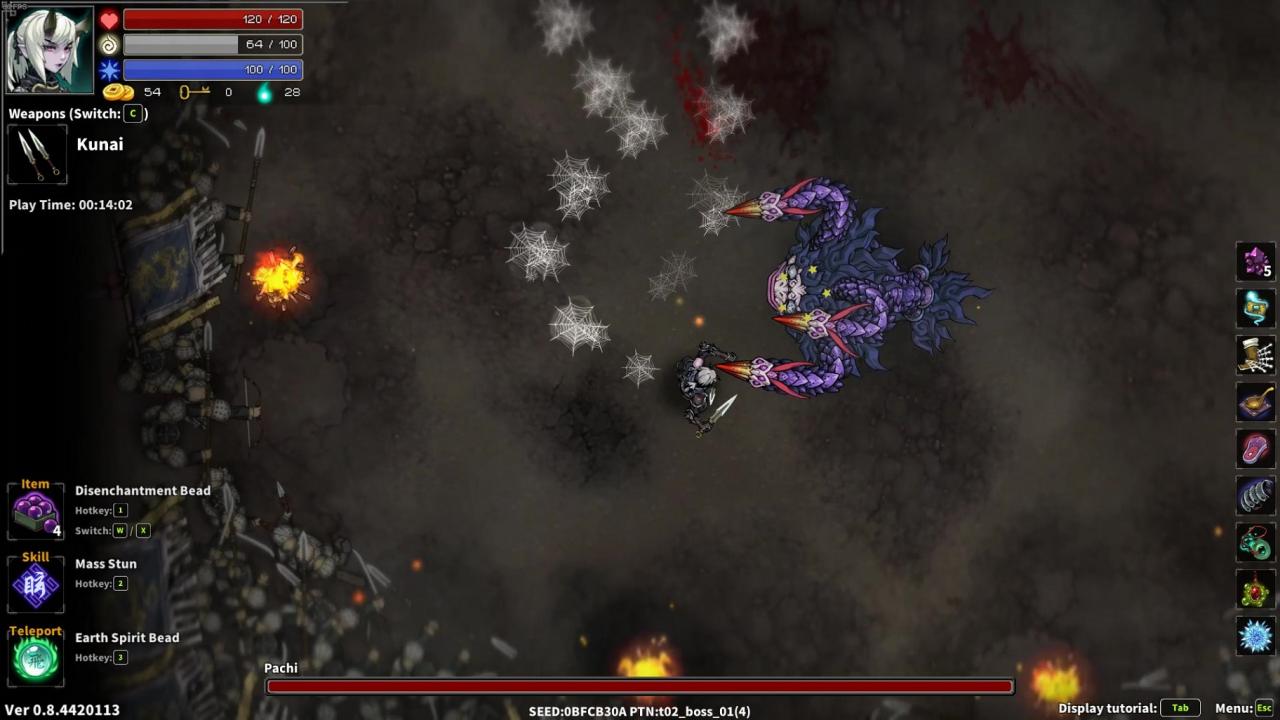 He has 4 attacks and a summon.

Tactic: Pachi will put your patient to the test, take your time, prioretise killing his nightmare worm first.
Bait his spinning attack and attack when he’s stun from it.

The god of war Hsing T’ien is wielding a axe and shield. Though he rarely block. 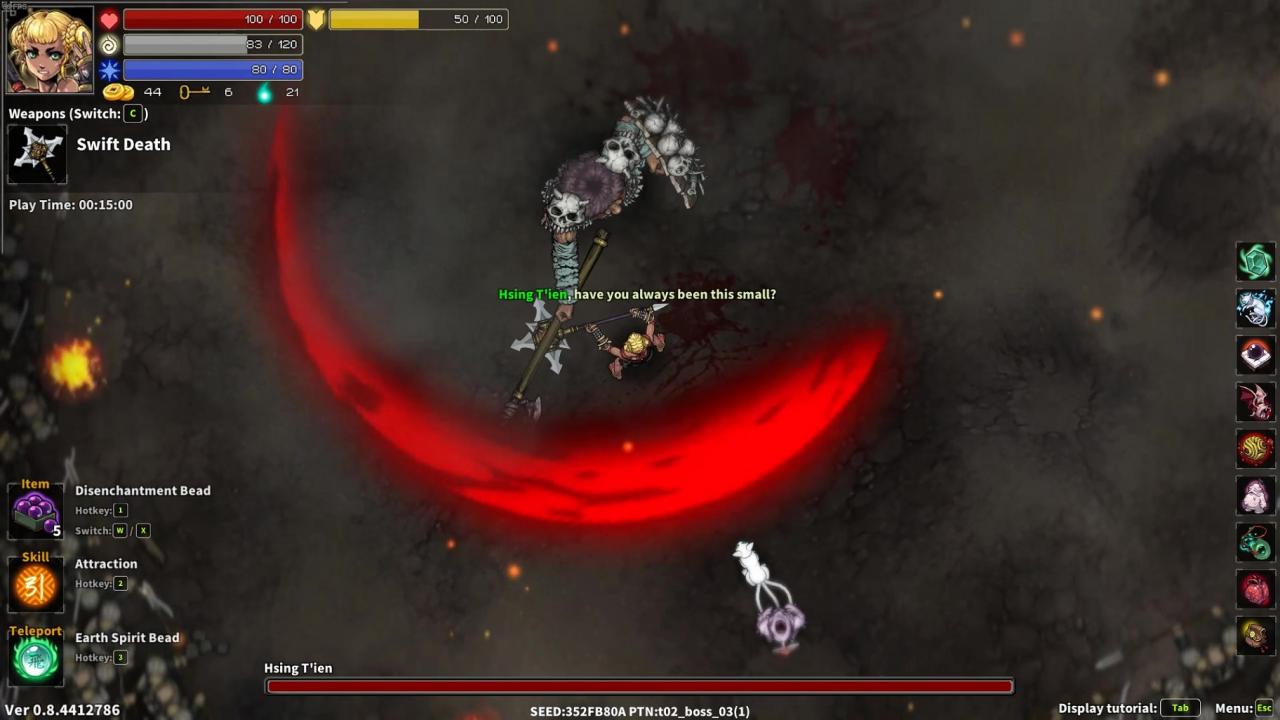 Tactic: Hsing T’ien will try to stay at long range, sprint and attack him. He has trouble dealing with you if you’re close. Every attack interrupt him.

Gray Immortal is the weakest of the five Immortal. 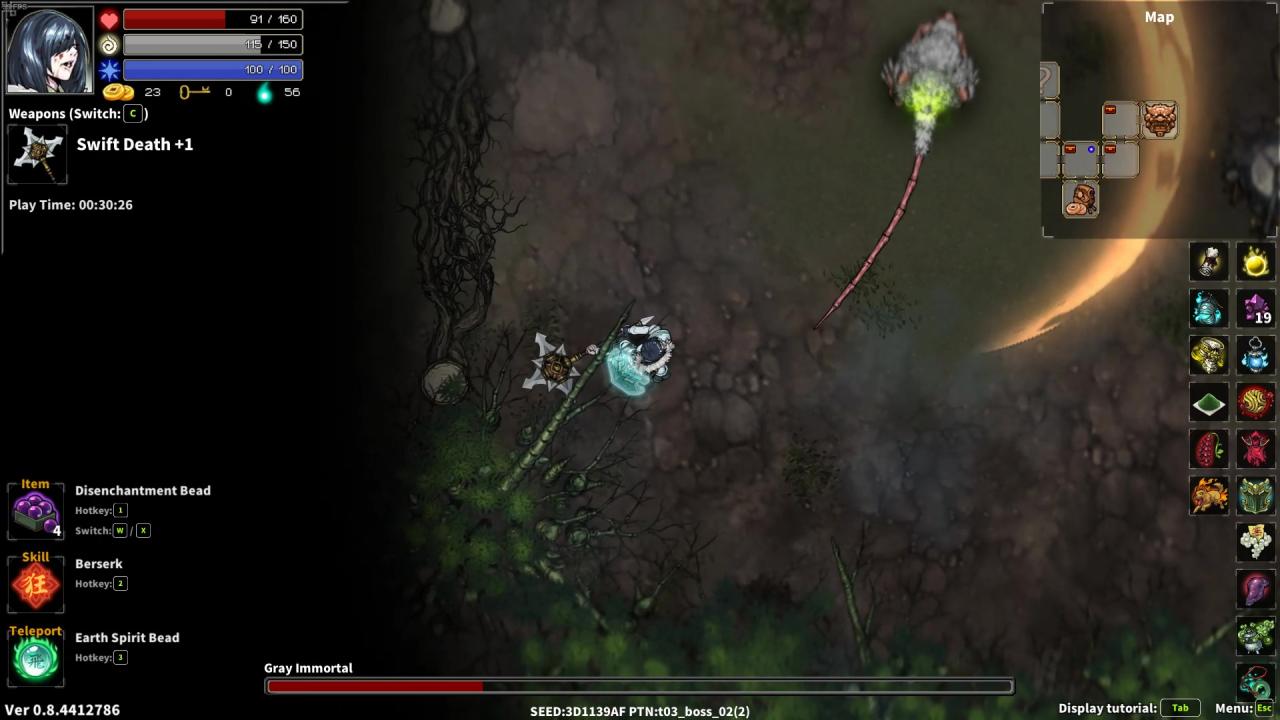 The gray immortal has 3 phase.

The Arboreal Maiden is a stationary dryad. While easy to dodge, her attack hurts a lot.

She has mainly 2 attacks.

Tactic: fairly easy, take your time to damage her while avoiding attacks, destroy the giant flower at all cost, as the rosethorn maiden are troublesome.

Prevent the grass spirit from reach her, making her unable to heal herself.

The forest Devil is a root demon, using a lot of tricks to get you.

Tactic: He’s very quick to react and hard to fight without a block. You can block his root stab/grab, leaving him open to counter-attacks. If you don’t have block, try to dodge his root attack and counter. dodge to his right side to avoid the shield bash. Be carefull of the spike burst.

Gelatinous abomination is a stationary boss, spiting gas at you.

Gelatinous abomination generate a wave of noxious gas that spread everywhere. While the gas are very slow, it hurt a lot.

He can summons 3 lesser abomination type:

Tactic: attack between gas. Kill lesser abomination as soon as you can. While he focuses his gas at you, run away and wait for him to resume back to normal. 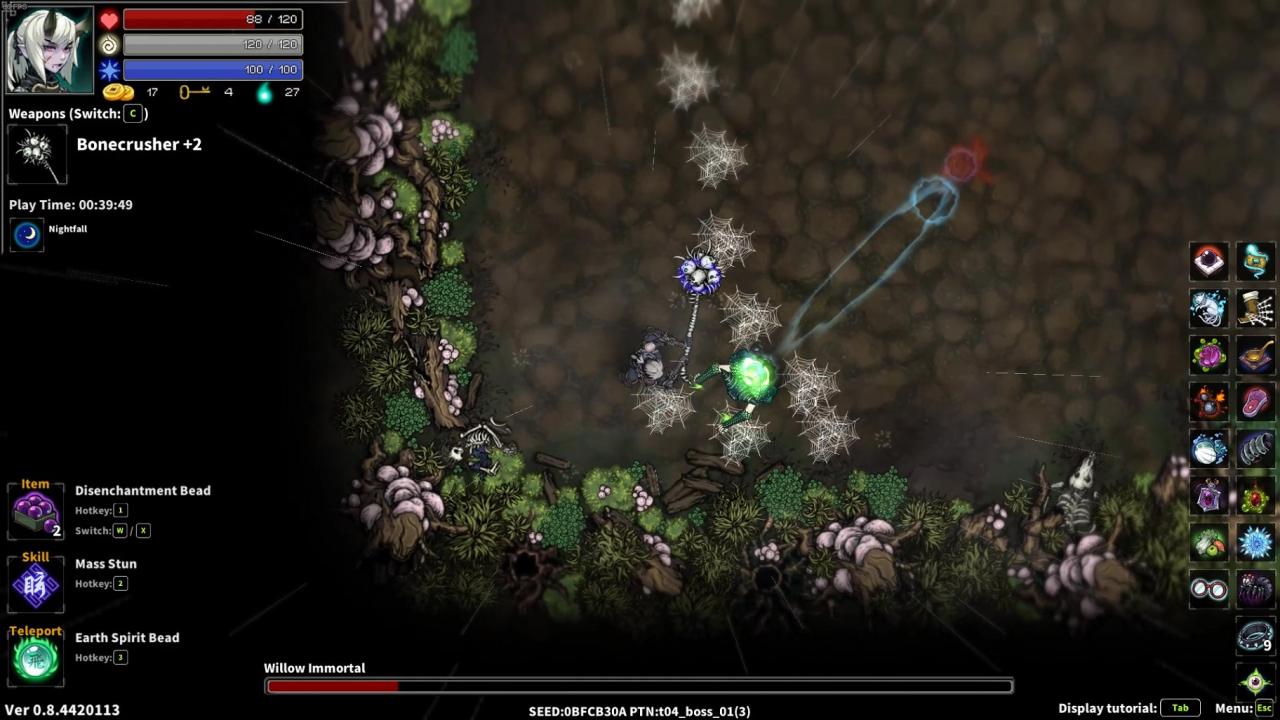 Willow Immortal is a tough assassin, agile, quick and deadly. She’s a serious foe, do not underestimate her.

Willow is armed with a dual poisoned daggers, and while she attacks, she cannot be interrupted by your own attacks.

She can summon a “Jade”, a quick poisonous snake.

Her set of attacks is similar to the player with the daggers, plus an ability to throw poisonous daggers.

In case you don’t know the attacks of daggers:

Tactic: Bait her charged lunge with just walking, after her lunge she’ll be open for a combo attack.
If you’re confident enough, you can spam riposte at her face.

Once she’s in focused mode, forget the riposte option, land only 1 hit after her long lunge attack, unless you have attacks that can’t be blocked.

Yellow Immortal is a cowardly boss. He like to stay out of your range and do quick lunge attacks or throw gas bomb. 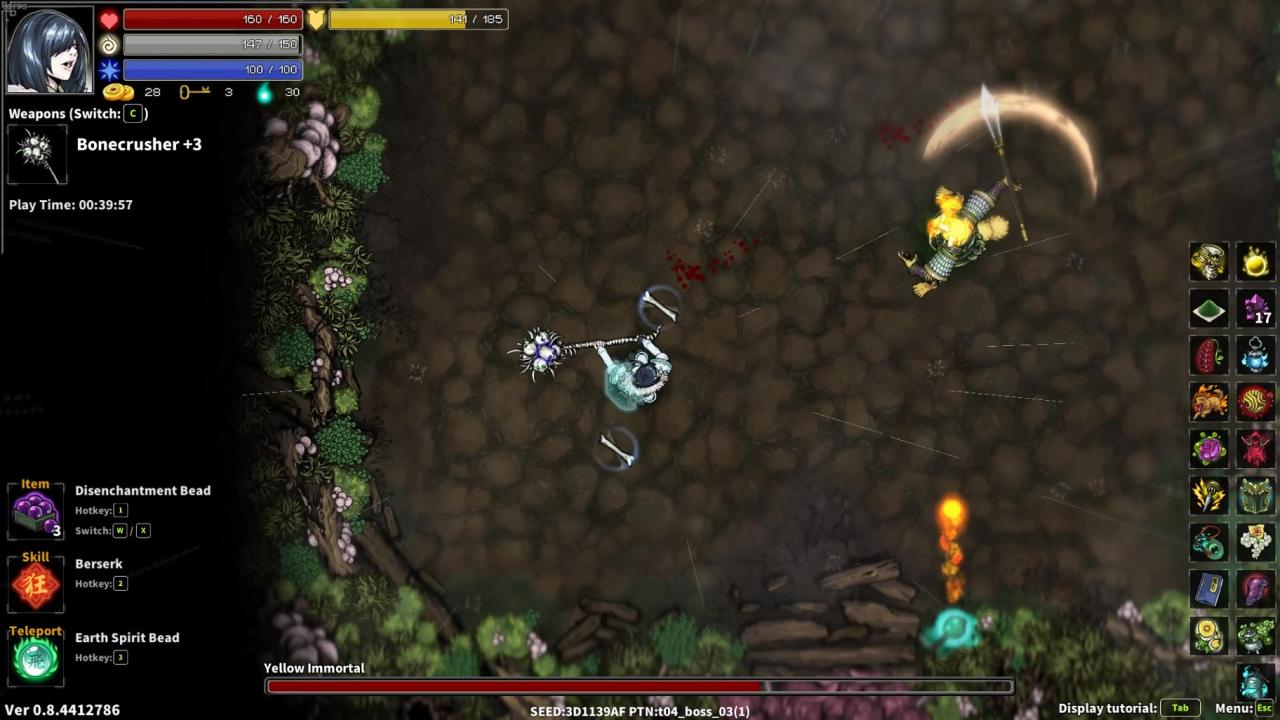 He has a very weak resistance to knocback, making him flee away everytime you manage to hit him. Unless he’s stuck against a wall, you won’t be able to land more than 1 hit.

Tactic: Wait and dodge his lunge attack and counter. Once his hp fall below 2/3, he’ll retreat and throw bombs, dodge bombs and attacks. When his hp is at 1/3, he’ll resume his first tactics. 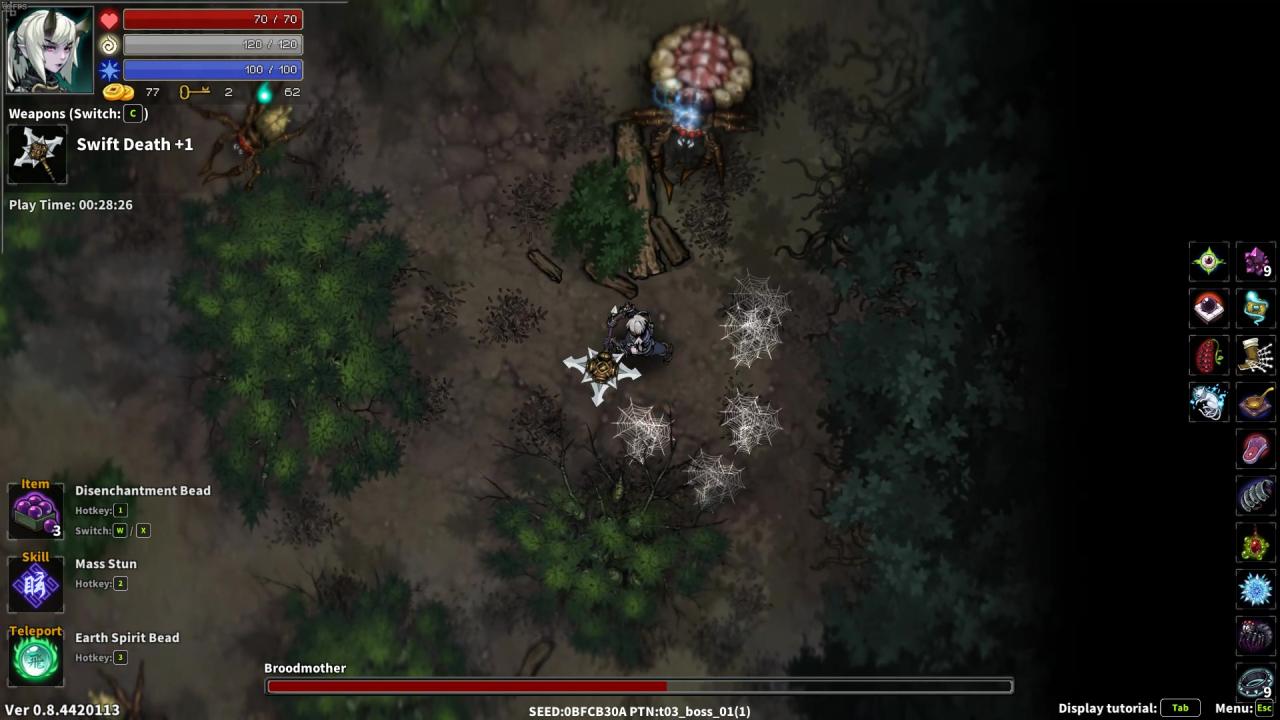 Broodmother is a couple of giants spiders.

The room is filled with spiders too, you can clear the room of spider before attacking the boss.

The 2 big spiders are very slow, but have a very quick bite attack at close range. this deal heavy damage and inflict poison.

They both explodes upon death.

Tactic: Clear the room of little spider if you don’t feel confident. Lure one away.
If you have a long range weapon, you can keep them at bay and attacks.

If close range, trigger their bite attack to dodge and attack quickly, they’re quick to bite, be carefull.

Fallen Buddha is a robotic buddha head. Stationary, it’ll shoot elementals projectiles at you. The head is surrounded by fire traps.

Tactic: Dodge betwen the head projectile and attack, while keeping an eye on fire trap.

When the hands come, try to synchronize their attacks, after they both do the pounces you can safely attack them until they jump away.

The White Immortal is a dangerous boss with a long sword.

Tactic: All his sword swing can be blocked, using a shield is very effective against him. Riposte work too if you have good reflexes. Without the block option, try to dodge behind him when he attack with his sword. Be carefull of his elbow kick, it’s very punishing.

The SteadFast king is a spirit of thunder. Every attack he does is infused with thunder elemental. Causing paralylis.

He’s very slow, though he can attack you from anywhere.

Tactic: Get close enough to trigger his lighting brust then attack him with defense breaking attacks (he’ll try to block).

If you don’t have any defense breaking attacks, fake the attack to trigger his shield, wait for his quick slash attack to dodge and counter him.

The sledgehammer raksa is a big scary demon, with his massive health pool and range.

He uses the sledgehammer like the player is able to do, with the addition of a spinning attack.

Tactic: Bait his swings, get close, he’ll continue his combo while you’re close enough to attack.

When he does his spin attack, sprint away, or if you’re confident enough, stick close to him, it’ll swing behind you.

Due to his massive health, the fight is longer than usual, take your time.

The Arrested Spirit is an powerfull assassin. Using tricks up his sleeves, he throws various thing at you. 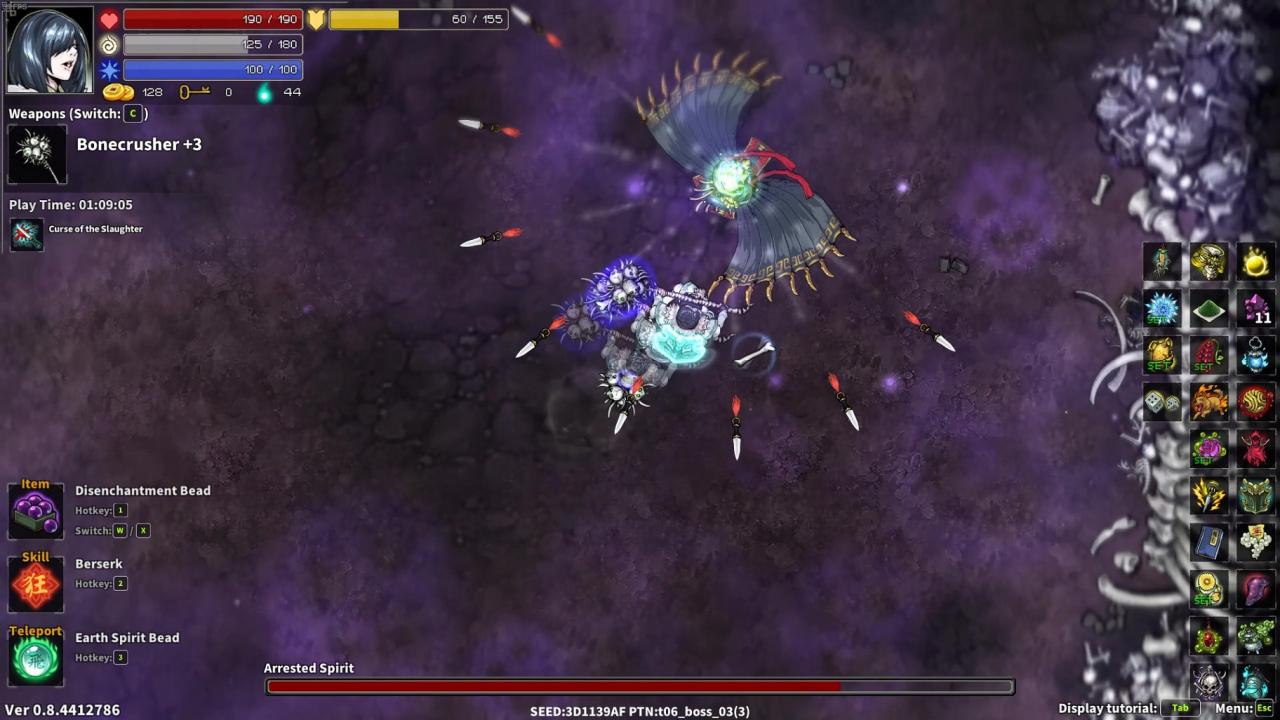 He teleport away when he’s hurt and not doing an attack.

He always alternate between 2 attacks:

Later when his health falls bellow half, he can summon swordmens to help him in battle, and can use 2 new tricks:

Tactic: Dodge through is dagger and attack. If he cast a lighting ball, wait for the ball to dissipate before resume attacking.

Be ready to sprint away when he does his attraction ring.

You can attack safely after his precise explosion.

The fox immortal is a 5 tailed kitsune which love to bewitch people.

When you start the fight, she’s standing still with an energy shield and watches you, commenting on your fights.

Her moves consist of:

When her health fall below 50%, she summon 2 clones of herself, with the same attacks and reactions. The clone have less health and won’t respawn after their deaths.

Tactic: She’s fast and quick to counter attacks, never try to do a combo. If you have a long range weapon, you can “stun-lock” her, attack, wait for her to finish the counter attack, attack again.

Once she summon her clone it’s where the fun part begins. Keep moving but don’t forget to attack for pushing them back, don’t lose yourself, it’s the hardest part of the fight. Fire elemental is usefull against them, light them on fire and run away, letting them collide.