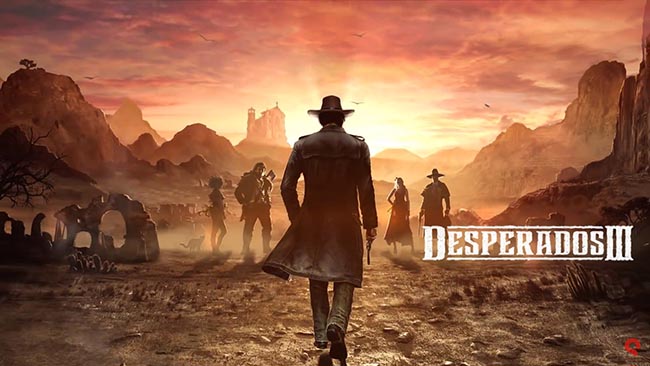 If you play Desperados III and want to get all achievement in the game, this guide will show you what are they and how to get them, let’s check it out.

These achievements can’t be missed and I only wrote this section to make you scroll through it.

Goodbye Colorado
Blow up a bridge.
Obtained at the end of Eagle Falls

Wait, Did You Say Marshal?
Find Wayne.
Obtained at the end of Queen’s Nest

Goodbye Louisiana
Meet Frank on a boat.
Obtained at the end of New Orleans Docks

Package Delivered
Take care of DeVitt.
Obtained at the end of Casa Devitt

Most Entertaining
Complete 5 of the Baron’s Challenges.
Just complete the Baron Challenges and you’ll get the achievement.

Achievements that require you to use certain skills for a specific number of times, can be grinded out by quick saving, using the skill and quickloading to use it again, there’s also no other real reason for me to include these in the guide but hey, maybe this way you’ll learn to use the Guide Index tool to skip through this kind of padding the next time you use a guide huh.

Follow Me Darling
Make guards follow Kate for 1,000 meters total.
Make sure you use her ability often while doing other achievements and story missions in order to make grinding this less of a pain

Another One Bites the Dust
Kill 500 guards.

Watch Out Below!
Kill 50 guards using the environment.

Someone Call the Undertaker
Kill 1,000 guards.

The achievements you actually care about

These are the achievements you opened this guide for

Chicken Dinner
Kill all 3 golden chickens.
You must kill 3 golden chickens walking on out of bounds areas in 3 different missions. Byers Pass, Mississippi River, Devil’s Canyon (Chapter 3). You CAN kill the golden chicken, and exit back to the main menu, you don’t have to finish the mission. 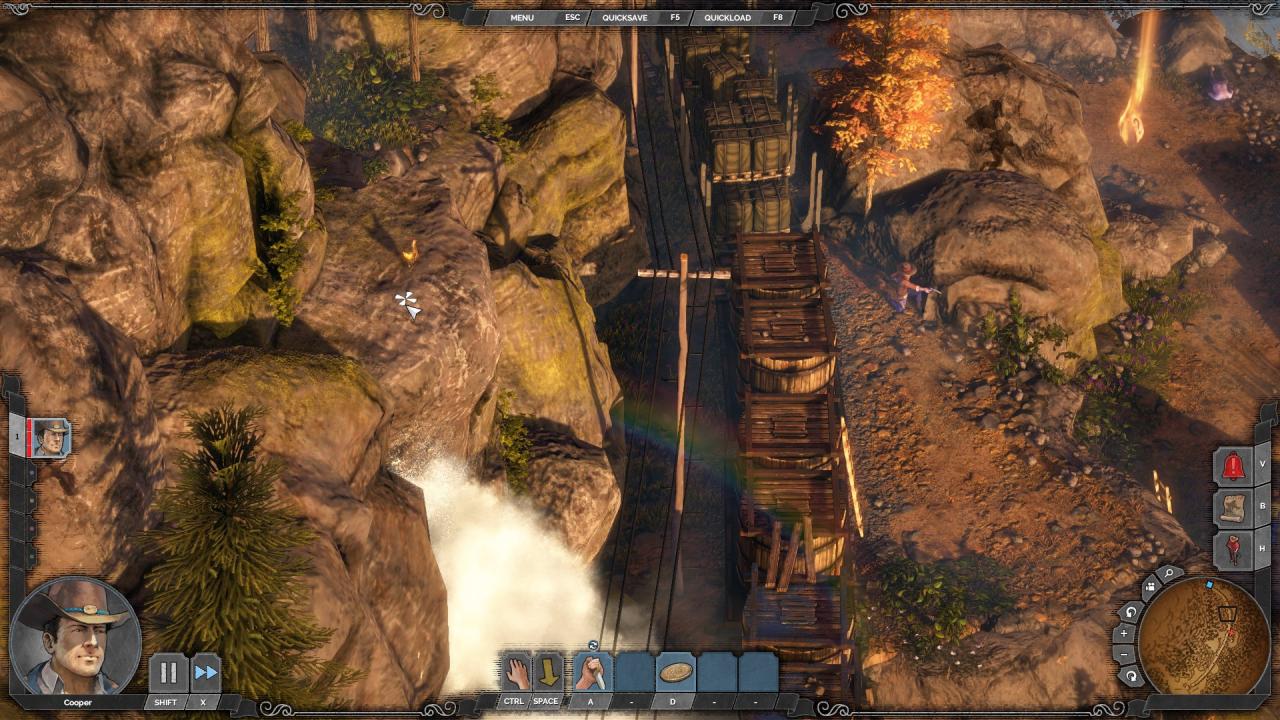 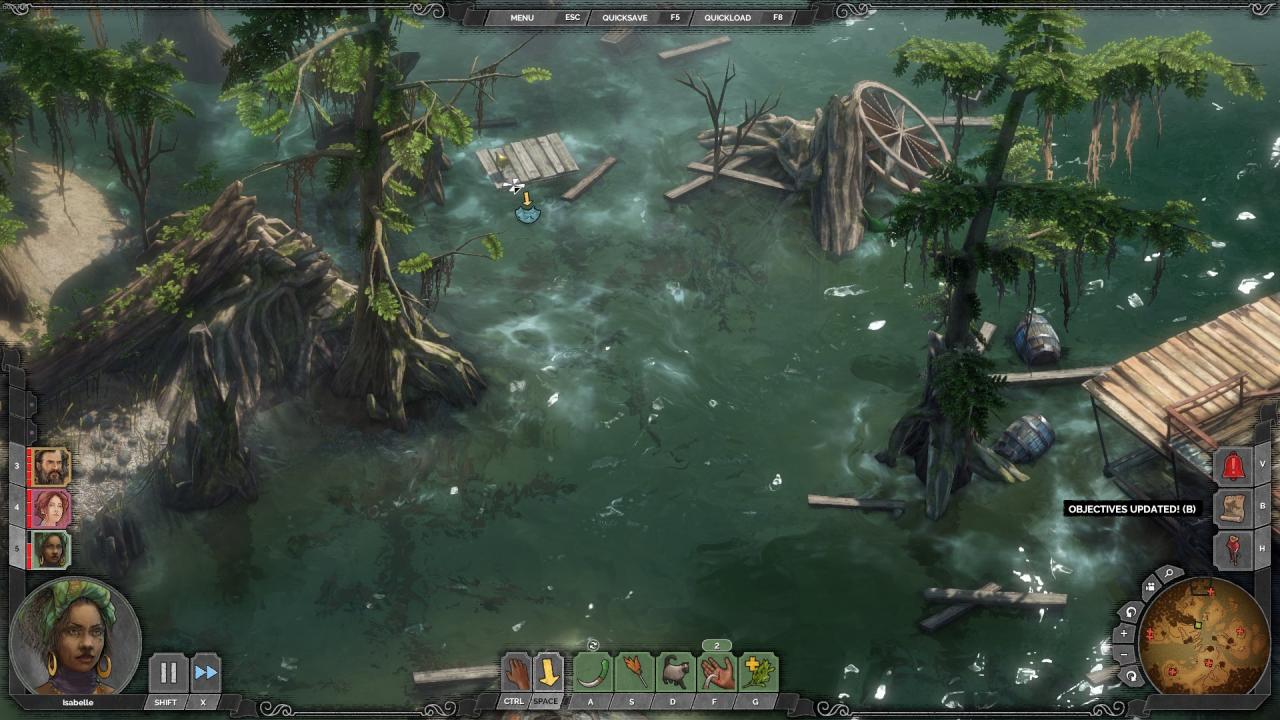 The second chicken is behind Cooper’s boat, on top of a platform 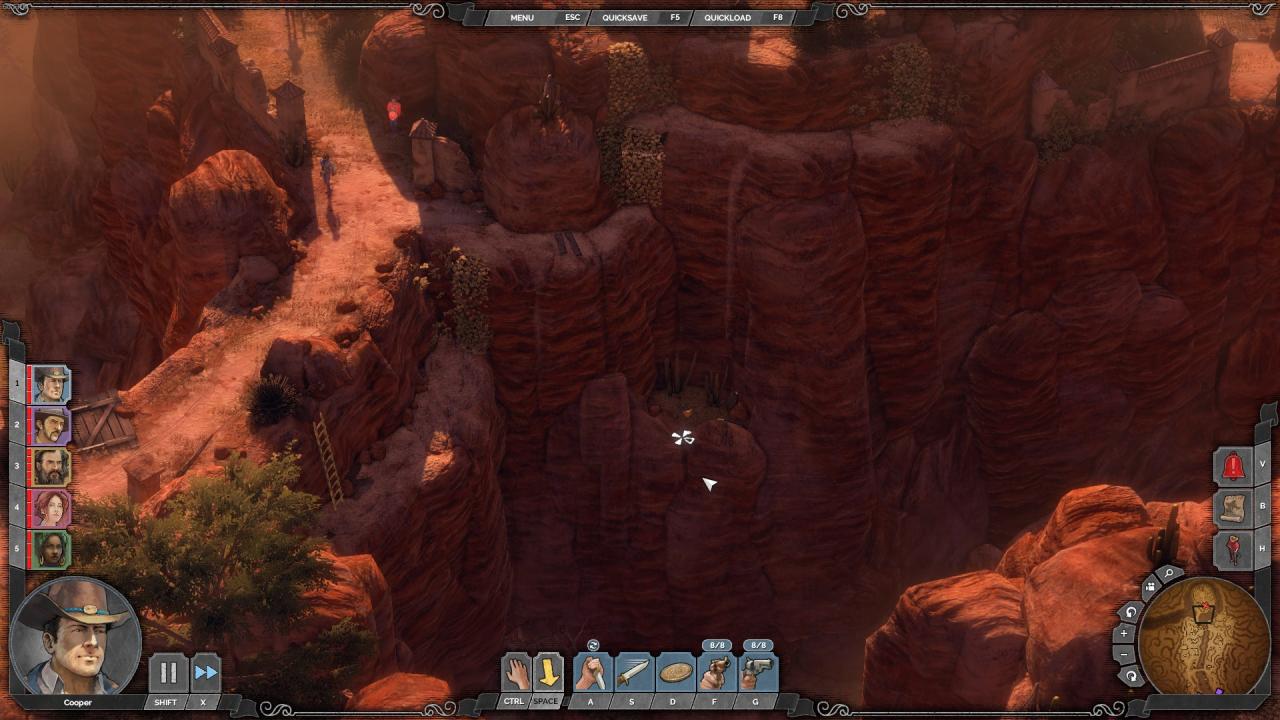 The third chicken is resting on some rocks below the left side entrance to Frank’s chapel.

Need a Dentist?
Find a patient for the dentist.
In Baton Rouge, at the edge of the map opposite of the docks, there’s a carriage with a Dentist standing next to it, approach him with your party and you’ll trigger his dialogue where he asks for a patient, you can either bring him a civilian who has a bad case of tooth pain going on, or you can just knock out a guard and throw him inside the carriage, either way the achievement will unlock after someone is in the carriage and the dentist walks inside the carriage. 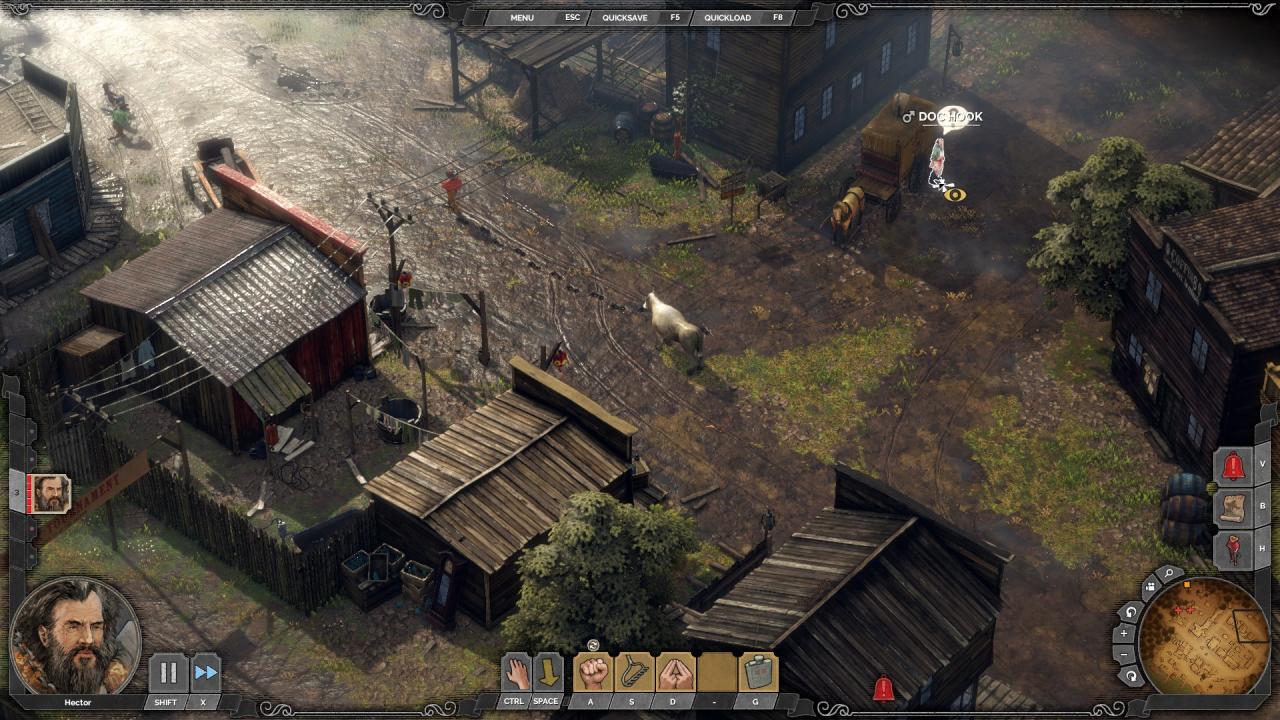 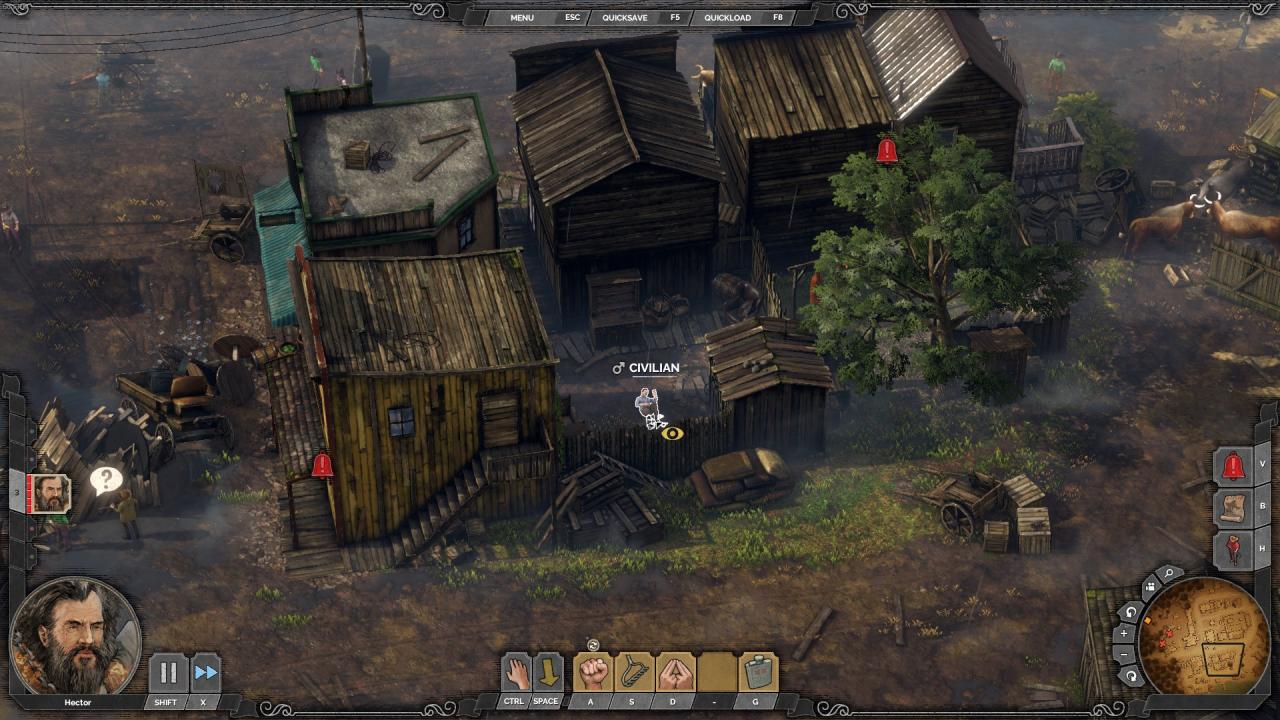 A man literally dying due to his tooth pain, surely you’ll help him instead of just giving the dentist a random guard, right?

Yakety Sax
Make someone follow your footprints for 25 meters.
Easily obtainable at the start of Baton Rouge by making the first guard follow Hector up the hill and around its two paths, alternatively make any guard run around a small obstacle that completely blocks his view

Exterminator
Kill 10 small animals in one mission.
Obtained by stepping on small animals spread throughout levels, from my experience it was easily obtainable in Las Piedras but New Orleans is also an alternative, in either case, grab a dress for Kate and roam around the map stomping on any small critters you see.

Sorry Dad!
Knock out your father.
In Devil’s Canyon (Chapter 1), in the part where you throw a coin to make a horse kick the guard that’s near it, wait for John’s dad to approach the guard to tie her up and throw a coin at the horse to make him kick your dad. 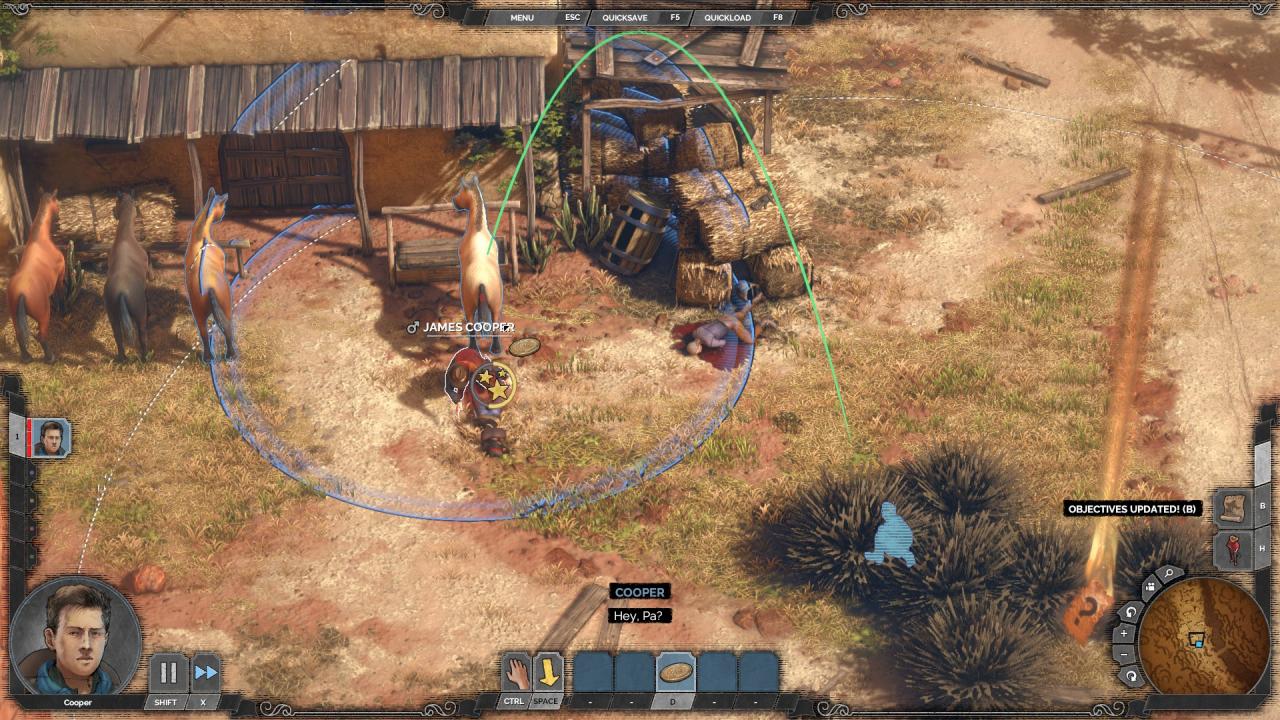 Lindberg and Hutch
Decide the outcome of a duel.
In Devil’s Canyon (Chapter 1) after you distract 3 guards to climb up to a building’s roof, two of the guards will set up for a duel, throw a coin to distract either one of them so that the other can win the duel. 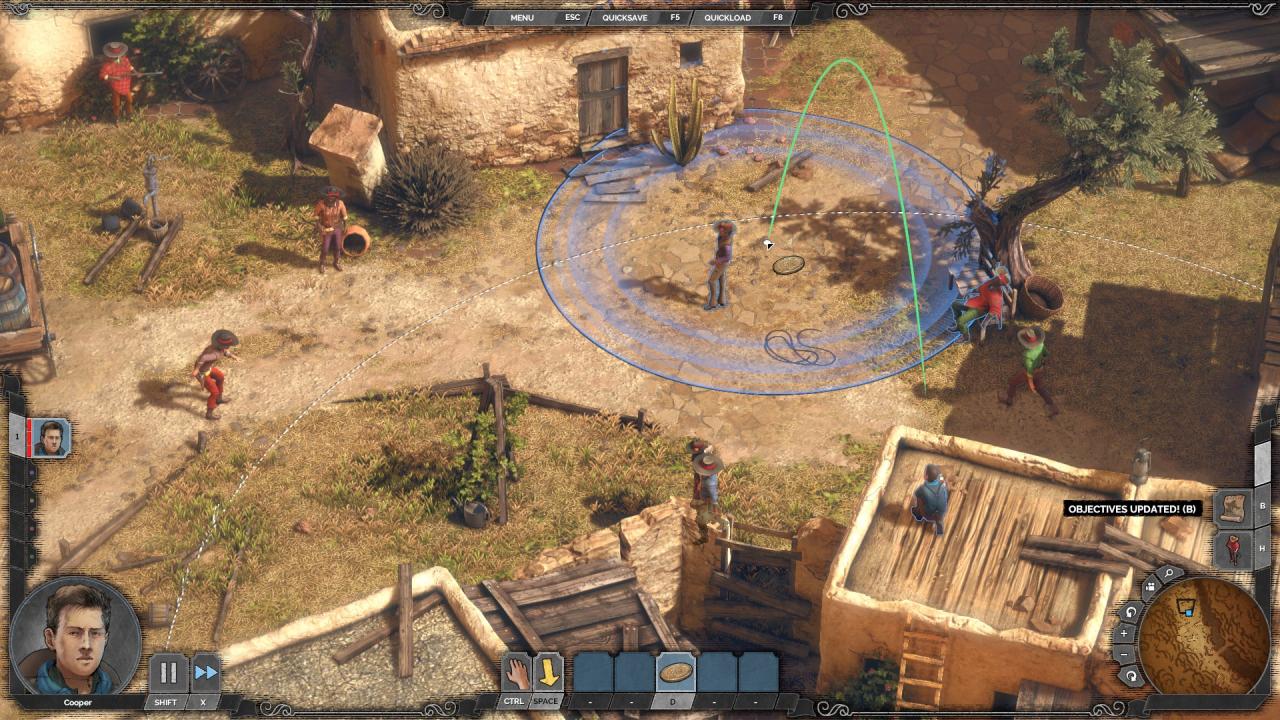 Gunslinger’s Creed
Jump from a tower into a cart of hay.
Can be obtained in Las Piedras on a tower next to the cattle. 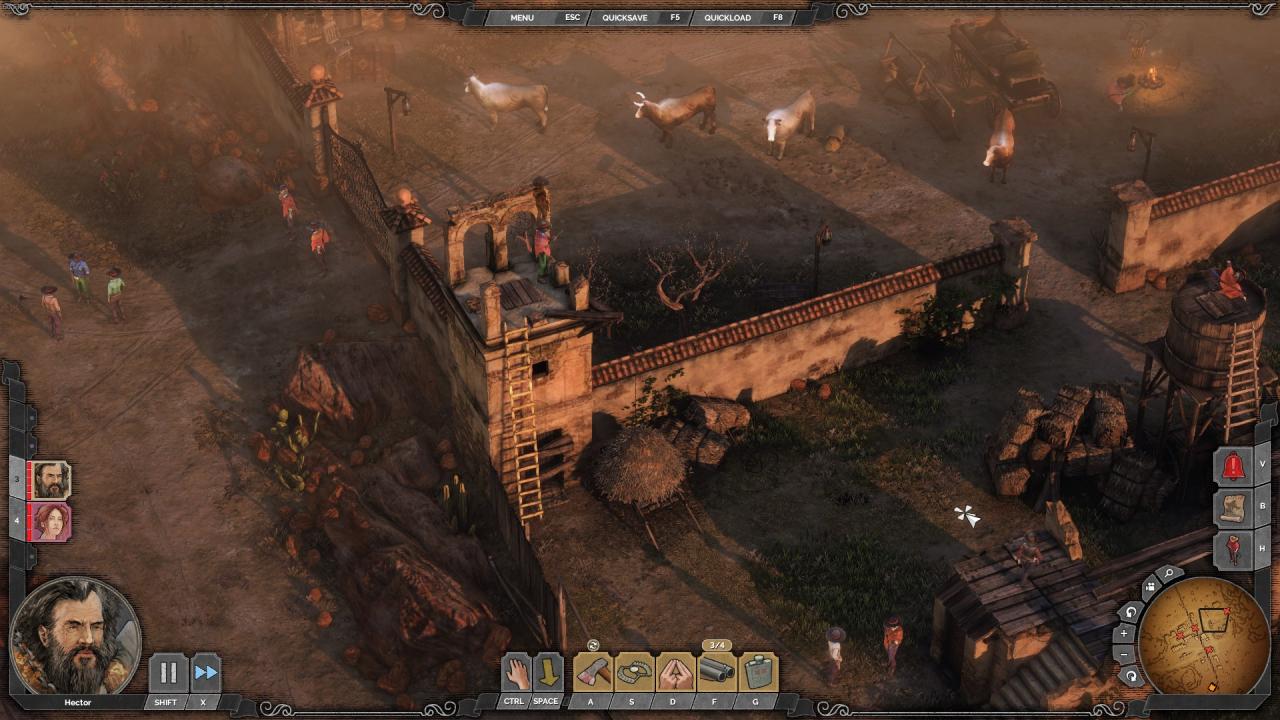 M-M-M-M-MONSTER KILL
Kill 6 guards at once using only a single skill.

Inferno
In the first part of the mission, burn 5 guards at once with oil traps.

Kaboom!
Kill 5 guards at once with dynamite.

These 3 can be easily obtained by knocking out several guards, setting them up and then just killing them with the specified method, same method applies to mission specific badges.

Vendetta
Kill DeVitt.
Instead of knocking out DeVitt, just save and stab him. Stress relief.

Like Clockwork
Execute a plan with all five characters.
The lazy man’s way of doing this is starting Devil’s Canyon (Chapter 3), opening showdown mode, ordering everyone to walk a bit and then execute the plan

Power Nap
Interrupt an important healing procedure.
In Las Piedras, kill a guard and carry him back to the location the mission’s cutscene plays out and use Hector to throw the guard at Isabelle. Make sure it hits Isabelle and not Cooper, both give you a game over screen but only one gives you the achievement. 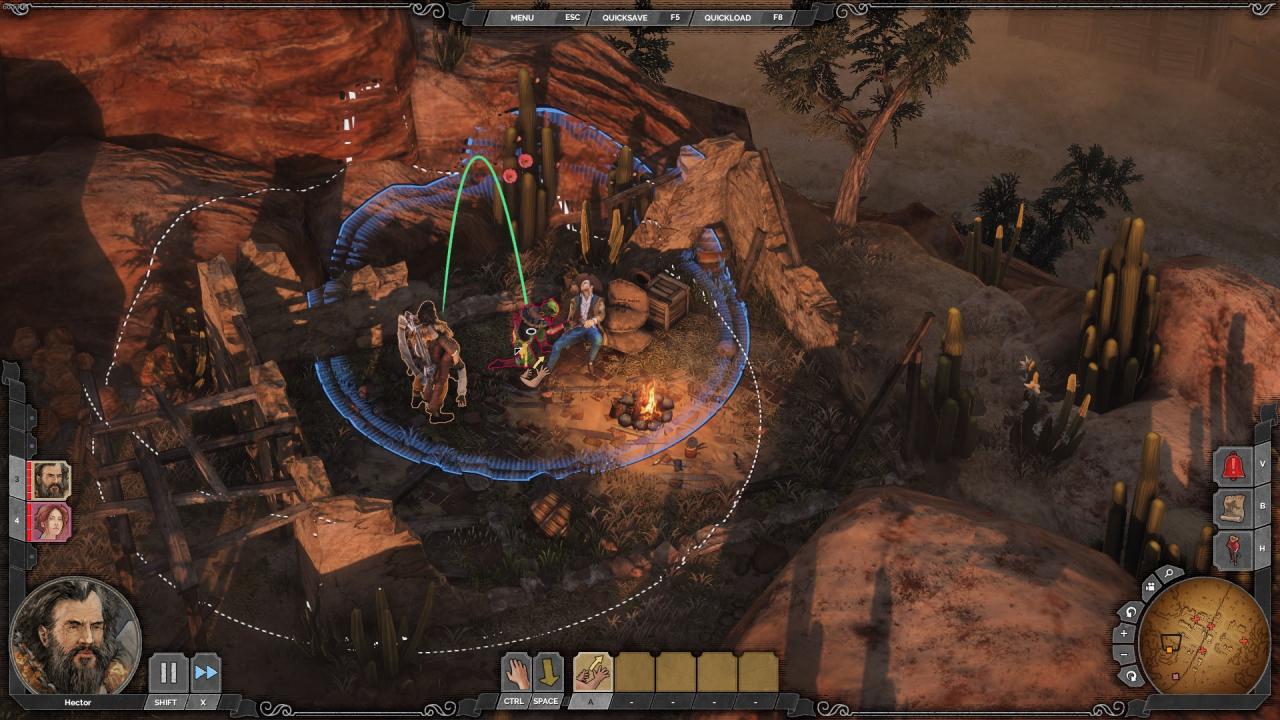 Make sure Isabelle is highlighted before throwing!

Hardcore
Finish a mission on “Desperado” difficulty.
Byers Pass is a pretty easy choice for this.

Lost and Found
Return the money to the bank.
In Baton Rouge, at the start of the level knock out Rosie and take her money, once you reach the bank throw the money on the floor in the same room McCoy is in.

The Picnic
Enjoy some cupcakes during a picnic.
In Byers Pass, in the section where McCoy mentions using his bag as bait there’s a ladder on the cliffside that leads down to a picnic area, move both characters there and throw the doctor’s bag on the floor for a cutscene to play out. 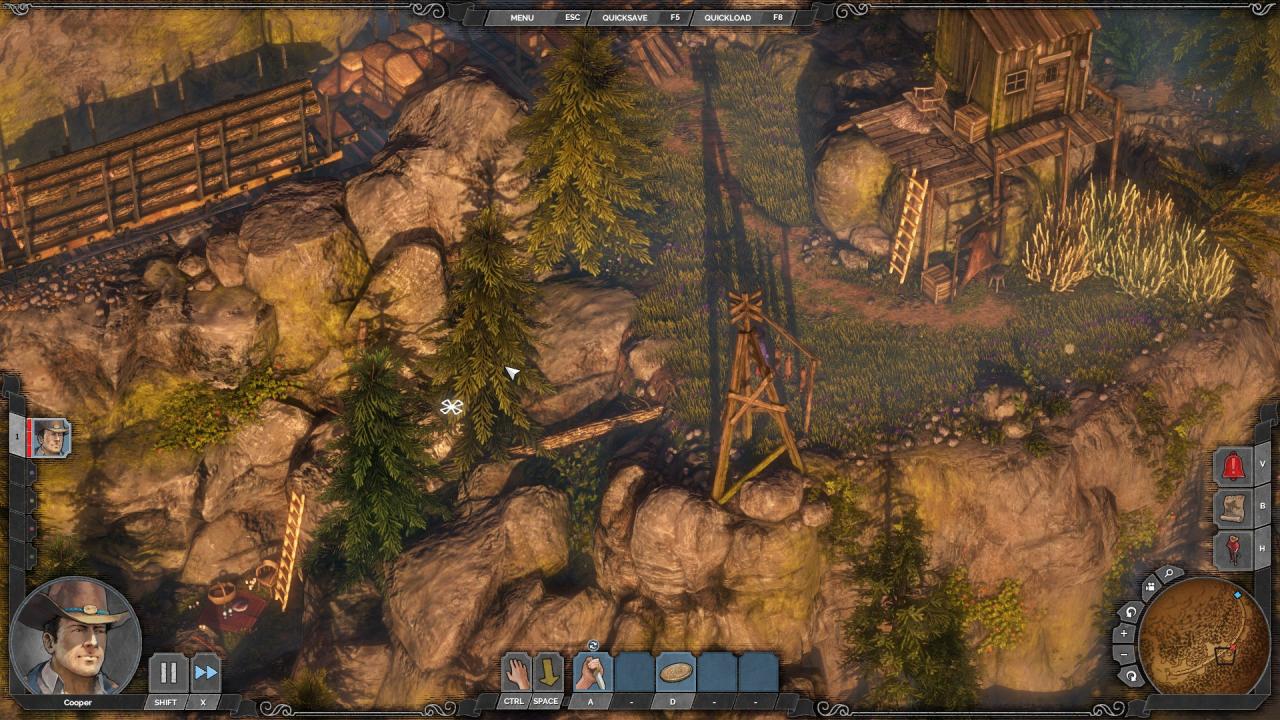 Sheriff’s Badge
Earn 90 badges.
GOOD NEWS! The game has more than 90 badges so you can pick whichever ones you want to do, if you played the game on Hard that’s already a good number of them down, the Chapter 1 mission badges are incredibly easy to obtain, even the speedrun ones, Baton Rouge and Mississippi River’s speedrun badges are also easy to obtain but ultimately it’s down to whatever badges you think are easier for you, keep in mind that any map with badges that have you pick two paths will reward you with both badges if you first do one path, and then the other in the same playthrough, and any badge asking you to kill people in specific ways (train, falling rocks) can be set up with knocked out guards. It’s also worth noting that you don’t have to finish a level for an unlocked badge to count towards completion.

Veteran Bounty Hunter
Kill 31 hidden Mimimi devs.
Every mission starting from Byers Pass includes characters named after Mimimi developers, these characters can be any guard type or civillians, keep in mind that NOT all named characters are developers.

That’s all we are sharing today in Desperados III Complete Achievement Guide, if there are anything you want to add please feel free to leave a comment below and we’ll see you soon.