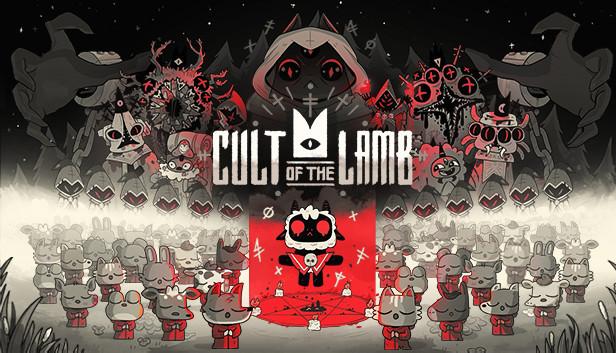 For Cult of the Lamb players,h tis is a guide on how to unlock every follower skin for the “Full Flock” achievement. This will walk you through/list all the basic and secret followers that you can unlock.

This page contains a list of all the different Follower Skins and Follower Forms you can apply to your cultists in Cult of the Lamb, including how to unlock follower skins. 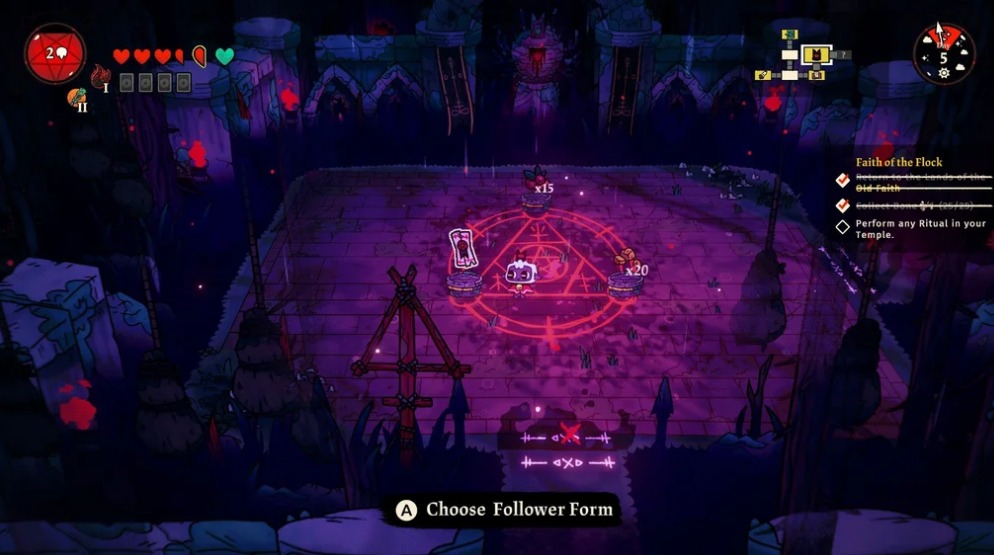 *Please note this list does not include DLC exclusive skins as they are not needed for the achievement*Followers can be unlocked by buying them from merchants, finding them in chests, and even special missions. Some followers are even unlocked by slaying minibosses, they will be listed down below. 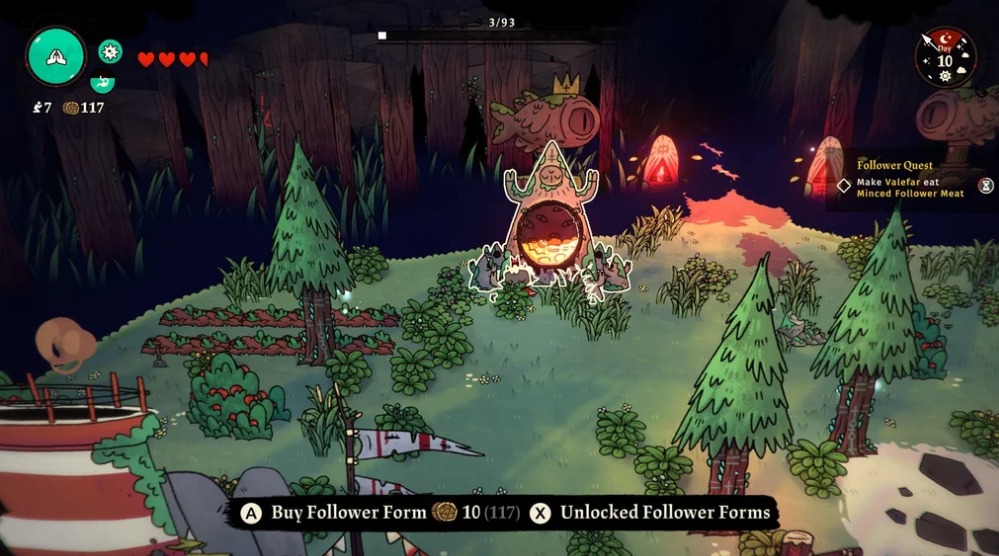 Credit is due to Brendan Graeber and IGN for the pictures/screenshots included in this guide.

Here are the general follower skins that are either already achieved or have no specific area to find them in.

Darkwood follower skins are skins specifically found in Darkwood either from chests or shops.

Anura follower skins are skins specifically found in Anura either from chests or shops.

Anchordeep follower skins are skins specifically found in Anchordeep either from chests or shops.

Silk Cradle follower skins are skins specifically found in Silk Cradle either from chests or shops.

READ:  Cult of the Lamb How to Move and Remove Buildings & Decorations

Secret Follower skins are ones that are not found in biomes, but have additional side tasks to earn them. They can rank from easy to hard as some you might come across by playing naturally, others are not in plain sight.

The First follower skin I will be covering is the “Rat Follower Skin.”

The Rat Follower Skin is one of the earliest skins you can find and unlock. After entering Darkwood a few times at the direction of your mentor, Ratau, he will finally be satisfied you’re on your way to building a decent cult, and will retire to a Lonely Shack and ask you to visit. Upon reaching The Lonely Shack, look for piles of firewood just to the left of the shack and scavenge around it to find the Rat Follower Skin you can pick up. 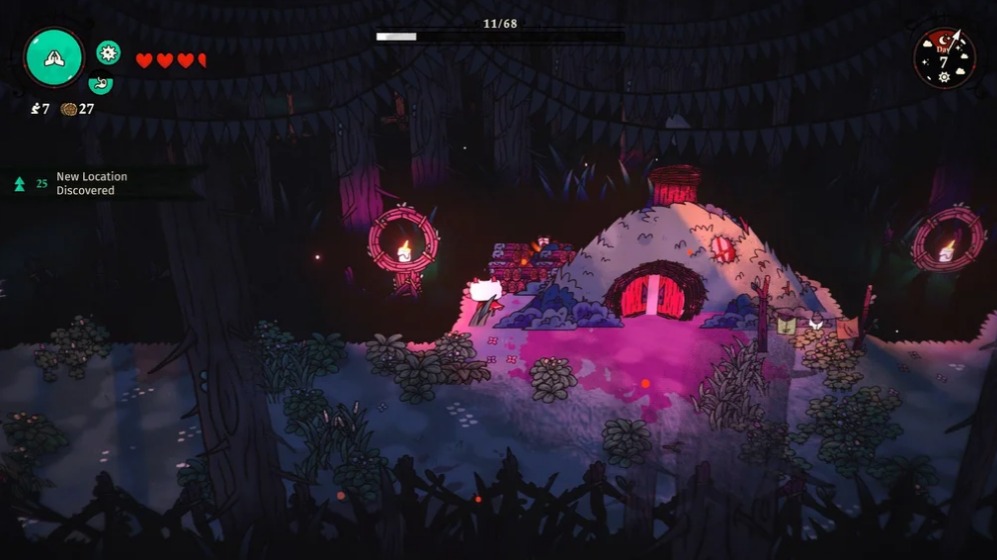 The Second follower skin I will be covering is the “Fish Follower Skin.”

After venturing through Darkwood a few times, you will stumble upon a fisherman who will allow you to visit Pilgrim’s Passage. Here you are able to fish up the skin, though it is random so it may take a few tries. 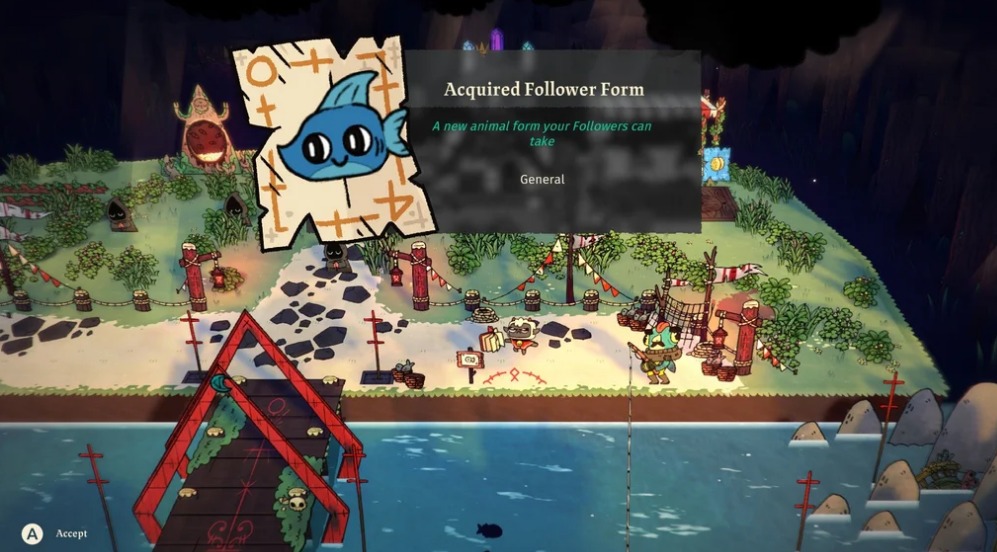 This skin is also located in Pilgrim’s Passage in the lighthouse to the left. Inside is the Lighthouse Keeper, He’ll ask you to fix the Lighthouse by supplying a number of lumber, and will reward you accordingly. When you return later, he’ll ask for more repairs in the form of 25 Crystal Shards, which can only be found attacking the environment in the Anchordeep region.

Find enough Crystal Shards to repair the Lighthouse one last time, and he’ll award you the Axolotl Follower Skin. 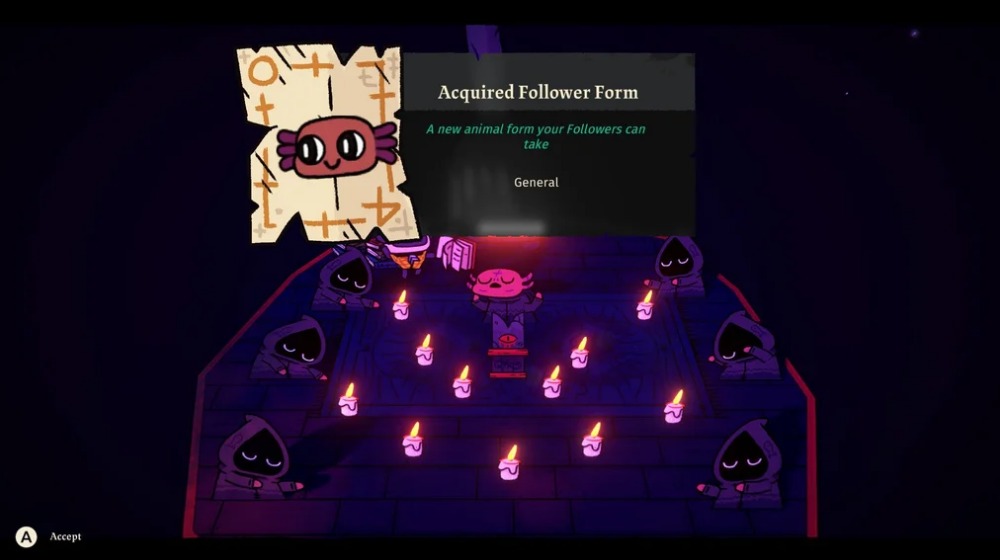 The Fourth Skin I will be covering is the “Crab Follower Skin.”

To acquire this skin you will have to venture into the Anchordeep region, there you will meet a man who will invite you to Smuggler’s Sanctuary. When you arrive, look around and you will spot a crab running around, catch him and you will be rewarded with your skin.

READ:  Cult of the Lamb How to Obtain all Tarot Cards 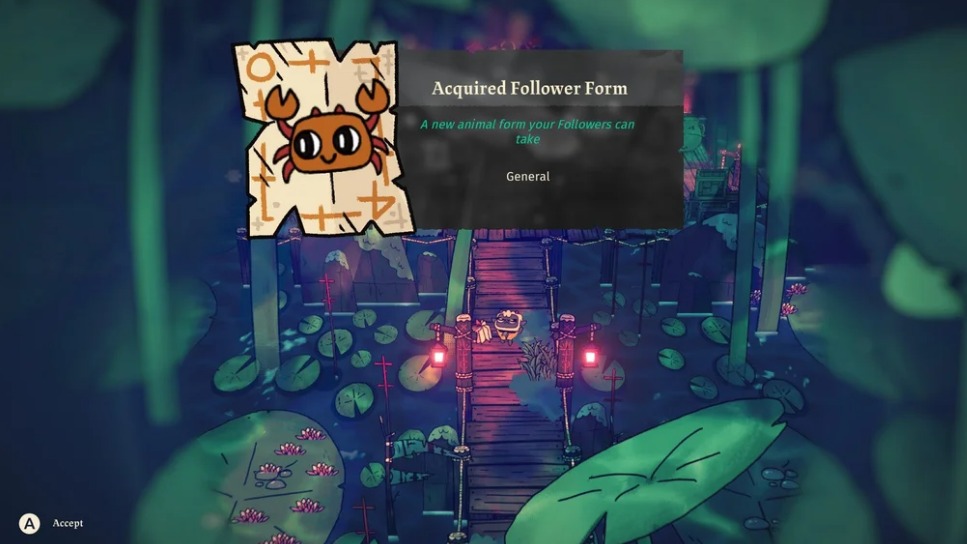 The Fifth Skin I will be covering is the “Star Follower Skin.”

Once you reach the final region of Silk Cradle, you may stumble into a sign post that unlocks Midas’s Cave to visit outside of crusading. This final area is full of piles of gold, and gold-melted characters. If you search behind the gold piles at the back of the room where Midas’ throne is, you can find the Star Follower Skin.

The Sixth Skin I will be covering is the “Wolf Follower Skin.”

The Wolf Follower Skin can only be gained at the end of a long questline that can begin as soon as you reach Pilgrim’s Passage. Visit the areas in the dead of night, and look along the pier for a green crescent until you can interact with environment to spot a spooky wolf creature in robes. He has four quests for you in each of the areas you unlock, and can only be found at night by the crescent symbol hidden in each place. He’ll ask some pretty crazy things of you like sacrificing followers, and you’ll have to accept to further his questline. 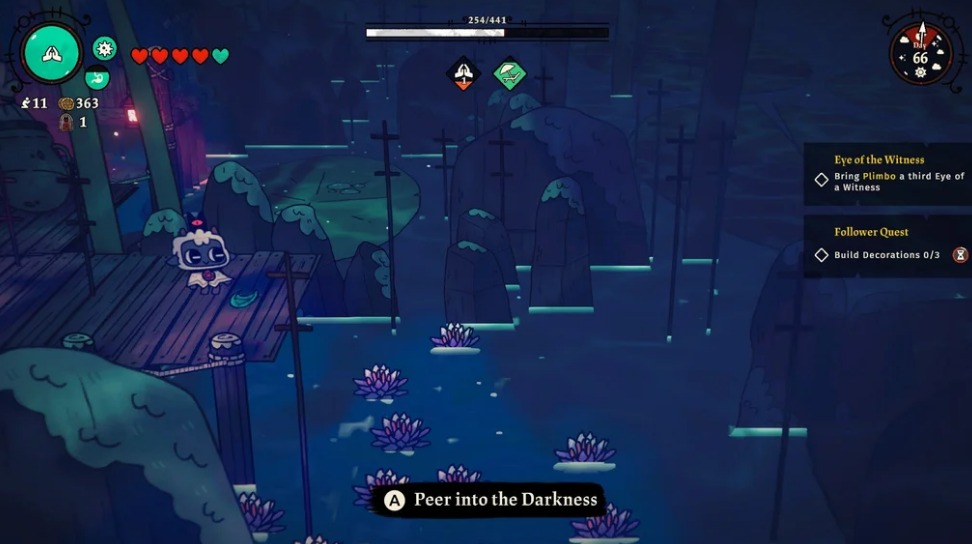 Once you get to Midas’s Cave and check the far back right for his last hiding spot, he’ll ask for the ultimate sacrifice. Do this, and you’ll get his last Holy Talisman piece, plus the Wolf Follower Skin. 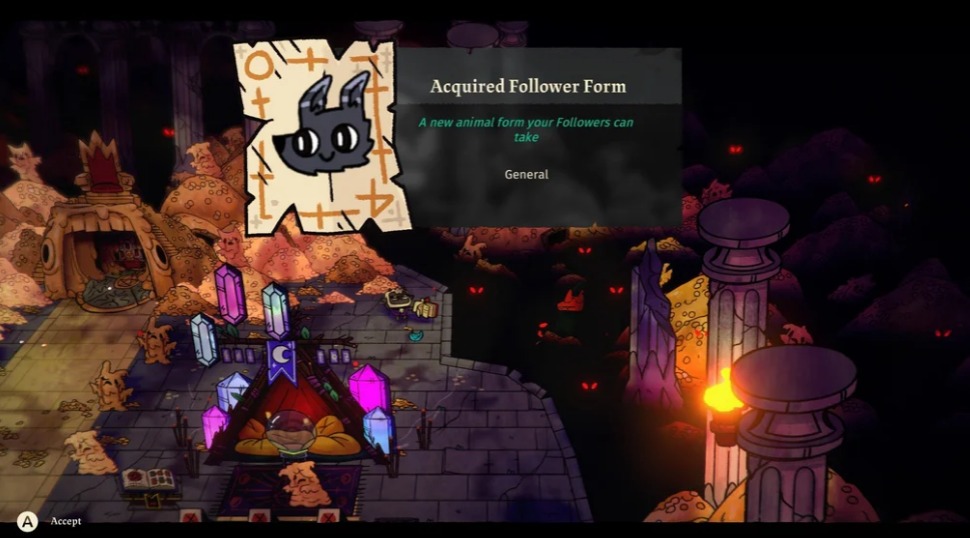 The Seventh Skin I will be covering is the “Poop Follower Skin.”

The skin is easy to get if you are willing to deal with many sick followers and lots of cleaning. You’ll need to craft a certain amount of Bowls of Poop to be awarded this prize, which means your followers are going to be in for a nasty surprise. Once enough have been crafted, the Poop Follower Skin will automatically appear. 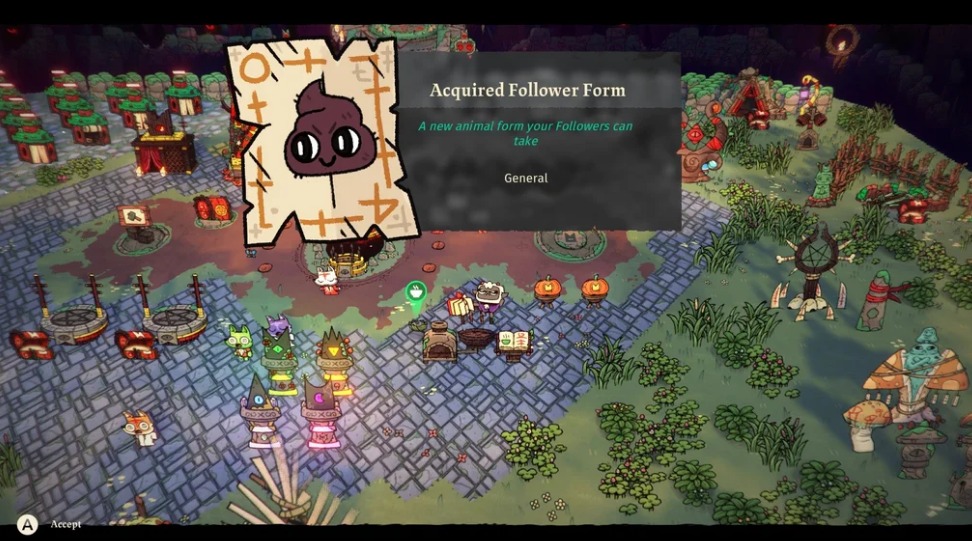 The Eighth Skin I will be covering is the “Mad Monster Follower Skin.

This skin is a pretty well kept secret as you will need to venture out into the regions until you stumble upon a shop for a merchant called Rakshasa, who sells food alongside his giant snail lady. However, if you smack the snail, Rakshasa will start to get angry. Smack it enough times, and the merchant will fight you. Do not worry though, the fight is rather easy if you know how to dodge. 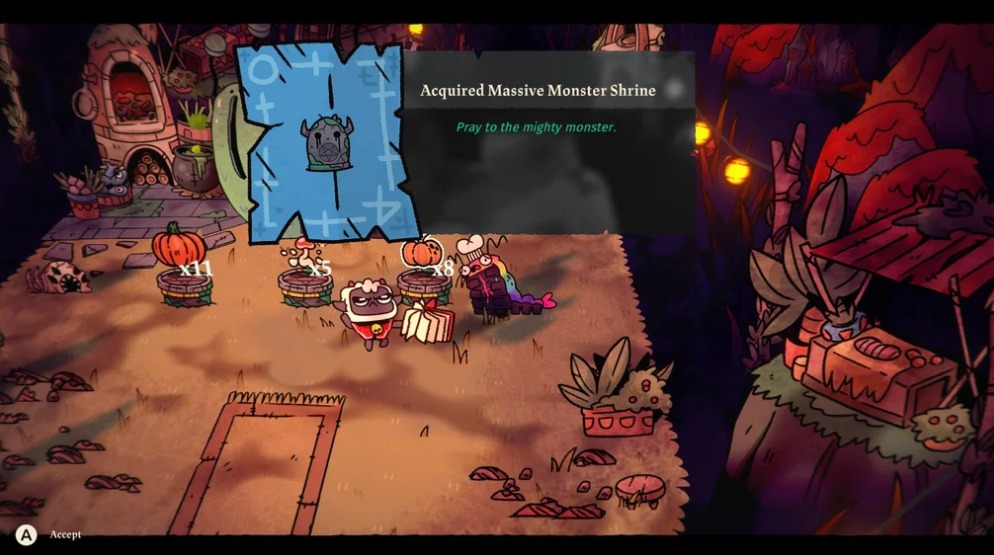 Once you defeat Rakshasa, he’ll admit defeat and promise to still do business if you lay off the beatings. He’ll also give you the Mad Monster Statue, a unique decoration that you can only build one of.

Return to your Cult and build the statue, and you’ll find you can interact and pray at the Mad Monster Statue, which will unlock the Mad Monster Follower Skin for you to use. 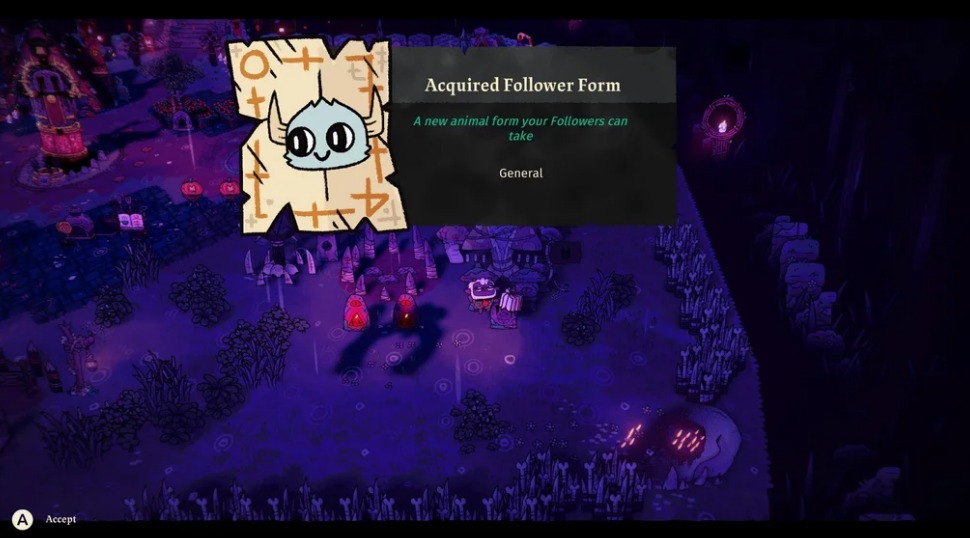 The Ninth and final skin I will be covering is the “Snail Follower Skin.”

This skin is by far the hardest one to obtain due to the rarity of its quest items. To obtain this although, kill snails in the Darkwood and Anura regions. Be warned, the snails are very rarely spotted, and even when killed, they have a chance not to drop their shells.

Once you get 5 shells, head over to the snail shrines, which can be found hidden away in all 5 areas you can travel to.

That’s all we are sharing today in Cult of the Lamb How to Obtain All Follower Skins, if you have anything to add, please feel free to leave a comment below, you can also read the original article here, all the credits goes to the original author Garf