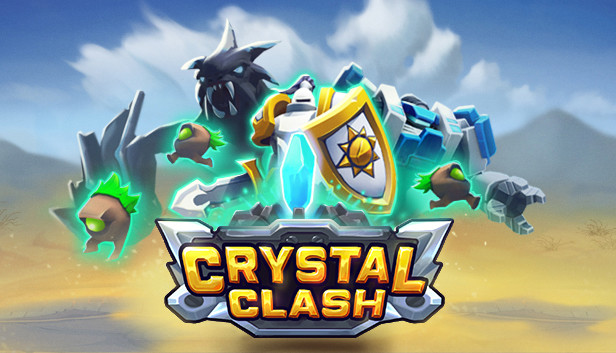 For new players of Crystal Clash, this is a list of basic tips to ensure your start has a lasting impact on the rest of the game.

There are three general classes of cards each player has access to:

NPCs can be summoned infinite times throughout the game, given we have the mana to use the card and it’s not on a cooldown. Mana regenerates throughout the game and regeneration increases over time. There are Tanks, Damage-Dealers, Support NPCs, and Stationary Turrets. Most units move at the same speed, so make sure to place Tanks in front, where they will sustain most of the damage. Damage-Dealers should be placed behind Tanks, where they can safely dish out the majority of your team’s damage. Support NPCs can be placed alongside or behind the Damage-Dealers.

Since most entry-level NPC summons require the same amount of mana (~100), it doesn’t make sense to put weaker Rangers or lil’ Skeletons in front of your Tanks, as have less health and will die immediately in combat, then our Tank will survive for longer but deal little to no damage.

NPC spawners are placed at the very start of our lane, within a small grid. These spawners will continue to spawn NPCs for free for the rest of the game. As far as I know, there’s no way to destroy or disrupt them. They create a passively controlled wave of enemies to fight for you, free-of-charge. 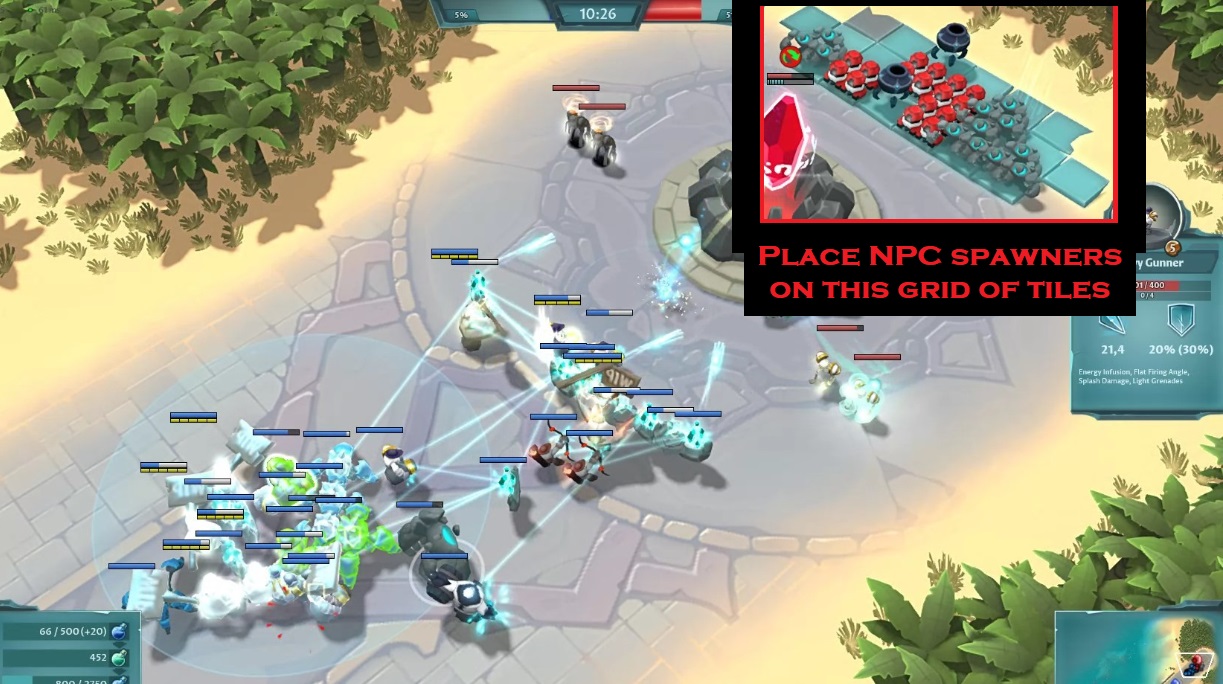 If no enemies are near a Tower area that our NPCs are running past, then we will start to capture the Tower area. Once captured, a Tower will immediately spawn and we can place our NPCs further along the lane.

Towers protect sections of the lane and use Charge like ammunition. Towers regenerate Charge over time and use it to defend their Tower area’s diameter. Towers deal moderately high AoE (Area of Effect) damage and will destroy NPCs very quickly, however, Towers will run out of Charge and be unable to defend themselves over time.

Place NPC spawners as soon as possible, ideally before the game even starts. This will make sure that the total number of NPCs spawned during the whole match equals or outnumbers that of our enemies. If our enemies place their spawners before the match starts, but we and our teammate places ours after the game’s start, then we will be at a greater risk of defeat simply by having less NPCs on the map.

Once our NPC Spawners are in place, move to the center of the map and be ready to place any moving NPC as far forwards as our domain allows. When the game starts, our NPC will reach the center Tower area instantly and potentially create a Tower at the very start, giving our first wave a boost of domain and support from the Tower’s damaging defenses.

Now that the match has officially started, our NPC spawners are creating NPCs that are walking up the lane, and our NPC we spawned near the center is capturing the Tower area and expanding our influence, we should create as large a wave as we can. We want this wave to come into contact with enemies just as they reach our most outer Tower. This way, our Tower can be our temporary Tank, absorbing and dealing damage to enemies while our wave of NPCs destroys them.

Spawn NPCs alongside the NPCs created by our NPC Spawners so all of our NPCs will reach the enemies at the same time. Staggered NPCs might die before further away NPCs arrive. 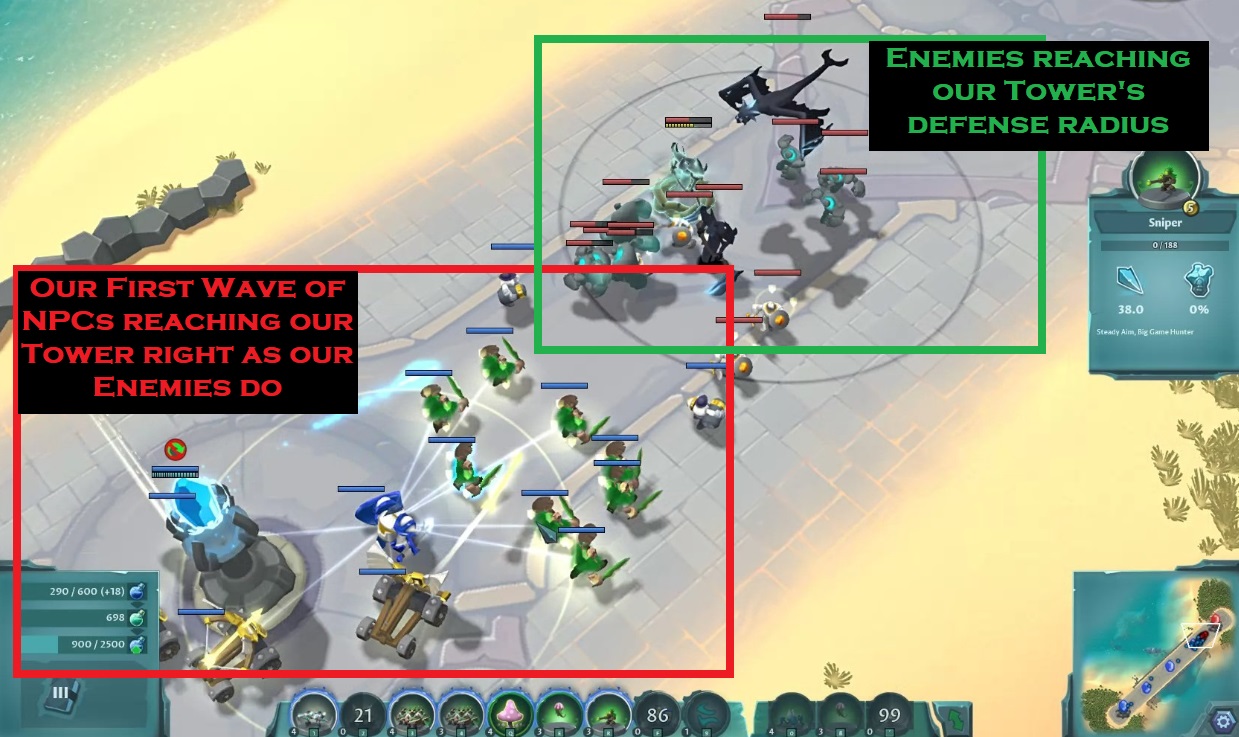 Spend as much mana as possible to use as many cards as we can. We want this first wave to crush our enemies and potentially their first Tower. Remember to create new NPC Spawners as soon as we are able to; keep an eye on our NPC Spawners and (Spacebar/Middle Mouse Click) to instantly view our NPC Spawner tiles.

Try to keep an even balance of Tanks, Damage-Dealers, and Support NPCs. For example, when using the starter Light deck, I like to create at least three Monks (Tanks), one pair of Archers (Ranged Damage-Dealers), and one quad of Soldiers (Melee Damage-Dealers). Place Tanks in front and we should clear through our enemies like a hot knife through butter.

Cast spells and emphasize creating more Tanks as the wave progresses to sustain wave momentum. Spells like Shield or Surge of Light as needed to give our NPCs a fighting advantage.

As soon as we think our wave of NPCs will all die before reinforcements arrive, we should stop creating new NPCs immediately. Start to save mana up to unleash a larger force all-at-once.

We will create a new wave at the very start of our lane once we have ~400+ mana to spend on ~4 new NPCs, Remember to create this wave alongside NPCs that are spawning with your NPC Spawners. Don’t worry if some of the NPCs from your Spawners run in alone and die, this will happen all the time. Use these automatically created NPCs as you see fit but don’t defend every last one.

READ:  Crystal Clash All Free Bonus Codes
That’s all we are sharing today in Crystal Clash Tips for the First Wave, if you have anything to add, please feel free to leave a comment below, you can also read the original article here, all the credits goes to the original author Rangerklypf [CG]