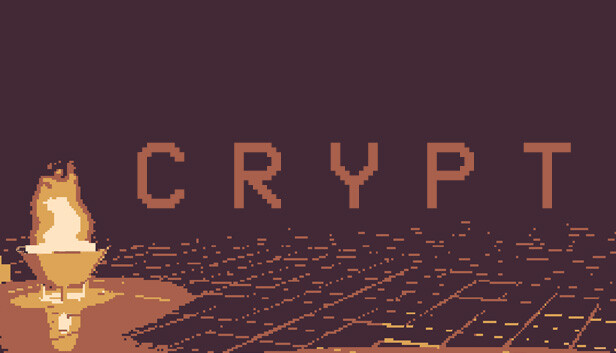 For Crypt players, this guide is about the 3D mapping the differet rooms in game, let’s check it out.

So you want to get ahead and beat the game, huh? Or maybe you want to rub it in Greg’s face and show him you are the ultimate Crypt Champion! Whatever the case, this guide/ walkthrough will enhance your gameplays while shortening your time in the Crypt. My team and I have explored over 50 maps (and counting) to understand the makeshift of each one. We utilize a Portable Lidar System (PLS) scanner that has allowed us to create 3D accurate maps of each floor/ level/ chamber. A lot has been noted and taken into account to share this knowledge with you. Below is our hierarchy of process on achieving these scans. 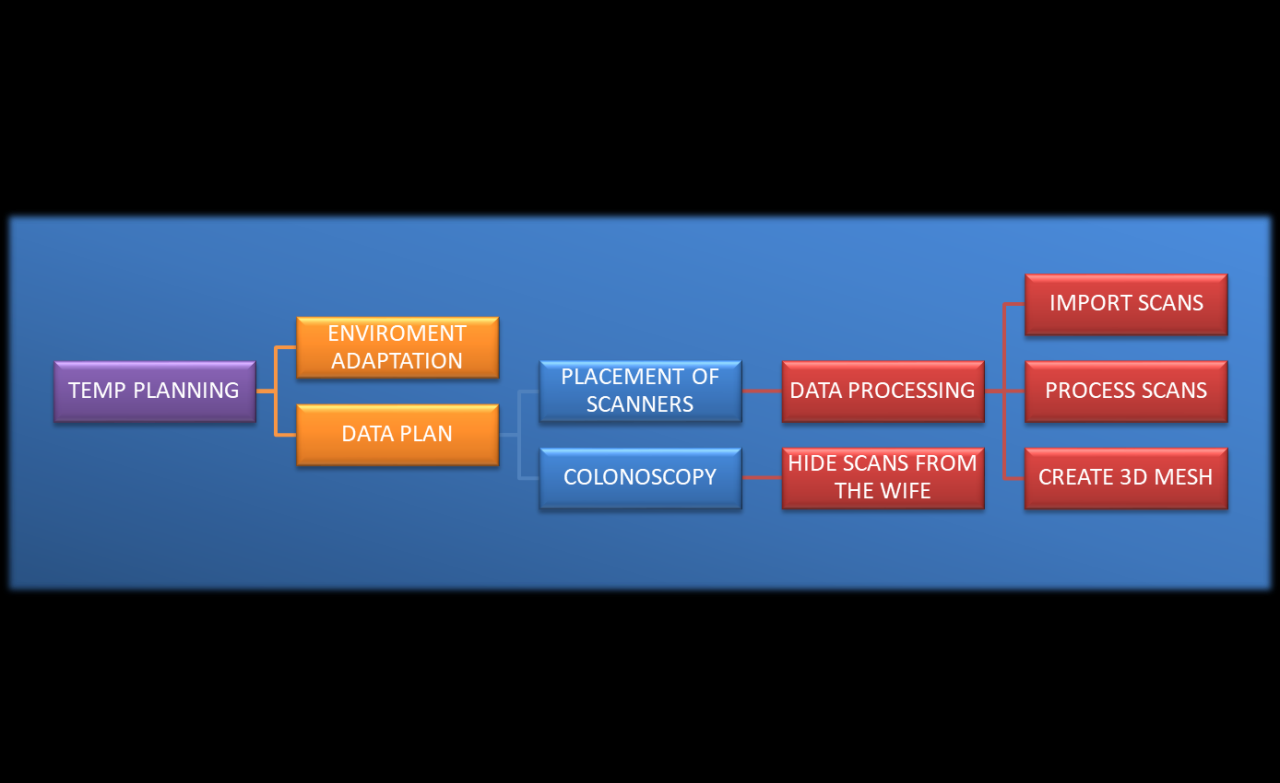 The team had to set up some control points using scan stations and then have the Player walk around the chambers with PLS. Software and hardware made the work a lot easier and supplied us with a complete understanding by providing a reliable, simple and high-performance 3D map. At first glance, it looks intimidating and that’s because it is. We don’t expect your feeble little brain to understand our magnitude of science but just enjoy the fact that we used different colored text to satisfy your colorful needs. 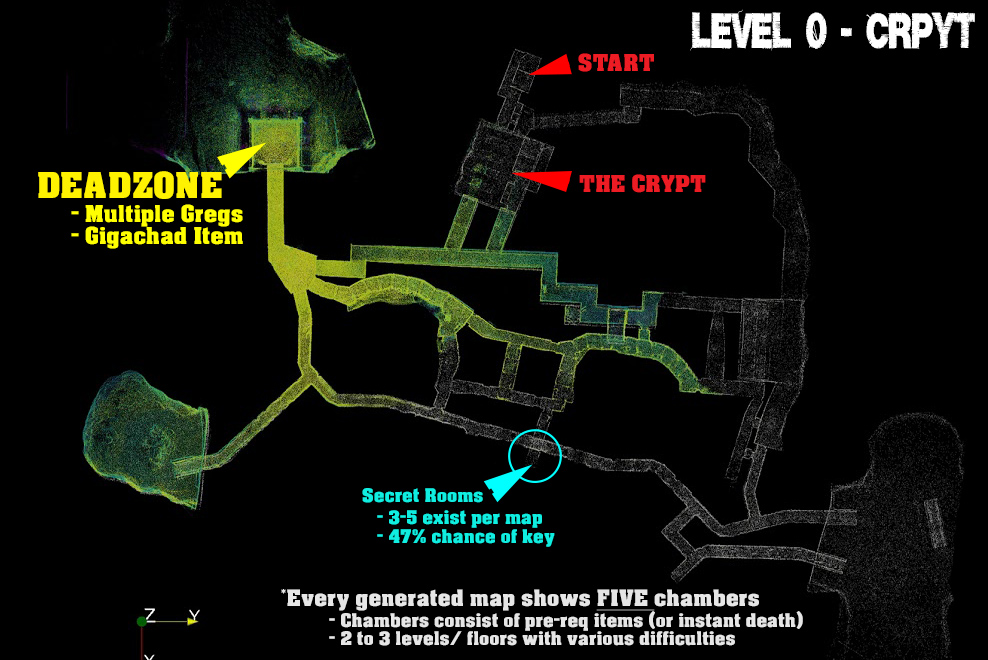 THE CRYPT
The Crypt is exactly as it sounds. No not the game itself, but it is the room the Player finds first. Inside will be a large chamber with torches around. A staircase leads up to where a sarcophagus rests in the middle between a set of chamber halls and an unopened wall that the Player needs to gain access to. As the Player collects keys, the game will make the sarcophagus jiggle jiggle and fold open. A wild Greg will come out and wiggle wiggle, for sure. It will make the Player want to dribble dribble the hell out of there.

THE LEVER CHAMBER
This room has got to be the worst for new Players that have not watched any of Valefisk’s videos. That is your own fault and you should be ashamed for not taking the opportunity to watch his videos before playing this. Now you have to stand there frustrated with solving a puzzle that is as easy as playing chess. Dimwit. As you should know, pulling a lever will cause a bridge to form within the chamber. Solving the lever puzzle will provide the Player access across the bridges to the other side of the chamber where an artifact can be found…. or nothing at all and you wasted your time playing this game.

SECOND AND THIRD FLOORS
One of these levels will be pointless and have absolutely nothing for the Player. Literally, nothing. The Player will walk in circles without knowing it because they do not know how to traverse a maze so now the Player wasted an hour trying to find a way out or anything for that matter. Better off taking a walk in reality and thinking about your life. The other floor will have more elongated chambers that makes the Player think they are going towards something great, but it crushes them with reality since these great things wont be acquired like their own goals in life. In other words, you hit a dead end. Turn around.

SECRET ROOMS
We noticed that every map had numerous rooms that dipped off from the main chamber(s). These usually had prerequisite items such as keys and artifacts needed to open the Crypt Door. You can find at least three to five of these secret rooms in any given map. You will want to look close or hug the wall when exploring so not to miss the tiny openings. Honestly, we think its safer in there than anywhere else. You would also have four corners to cry in. Perfect.

THE DEADZONE
This is a room you DO NOT want to find during ANY runs. The make of this room is an equal-sided chamber with literally nothing inside; There is a catch – Turning to try and find the way you came will present a solid wall and turning again to find the other side of a wall will reveal that the room has seamlessly closed in on the Player. What this means is that every moment you reach a different wall, the room becomes increasingly smaller. However, there is a small chance that instead of being crushed by the decreasing size of a room, you are instead met with the clicking of a thousand Gregs laying in wait along the walls and ceiling to ambush you. AVOID THIS ROOM.

The surveying of an underground system is difficult because of two discrepancies: the complicated and dark environment and the depth where signal can not be reached. We faced these issues on multiple occasions during our playthroughs. We found that equipping the Player with a wearable mapping system can produce what we need for data collection. This helped streamlined the process.

It should be noted that anything in this guide was made up and fabricated (some statements are true about certain rooms and Greg). I simply made it so you wasted your time with an interesting read or just because I don’t like you. Whichever makes you feel better. I got bored. To be honest, I have not personally played the game yet. I only saw Valefisk torment friends with it in his videos. So here I am, tormenting you with reading material

That’s all we are sharing today in Crypt 3D Mapping The Differet Rooms, if you have anything to add, please feel free to leave a comment below, you can also read the original article here, all the credits goes to the original author DapperShark