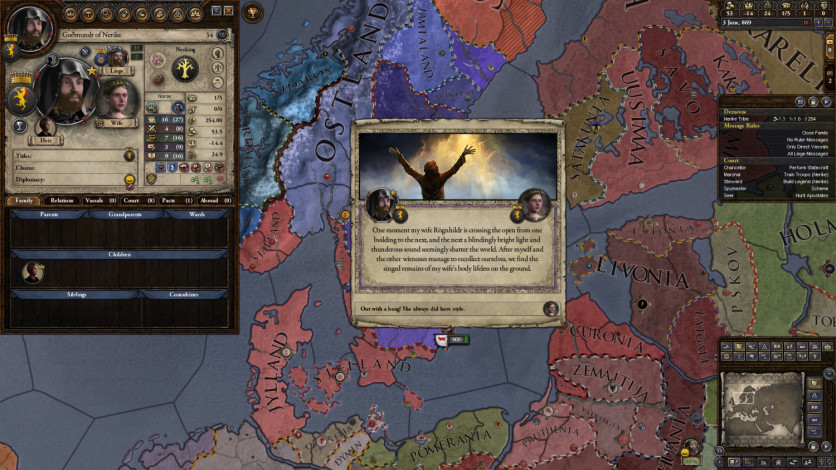 A list of some of the most useful commands, including some events, to use if you want an added boost in your AGoT games, or you want to construct the world to your liking before you begin.

Welcome to this guide on AGoT Cheats. Below you will find a list of useful commands and events, including how to create bloodlines with traditional claims on duchy, or kingdom level titles and dragon hatching events.

Some need-to-know terms in order to understand the guide

<Province ID> = Found in the files, for AGOT it’s at /documents/paradoxinteractive/crusaderkingsII/mod/agameofthrones/history/provinces

<Title ID> = Found by using ‘charinfo’ command and hovering of CoA (Coat of Arms, or Heraldry) of a Province. Usually has prefixes;
e_(empire name) for Empire,
k_(kingdom name) for Kingdom
d_(duchy name) for Duchy
b_(barony name) for a Barony (Lordship)

Any commands you or events you want but are not part of this list, either look up the exact command preceded by ‘ck2 agot’ on a search engine, or DM me and I’ll try to help. 🙂

I hope you find this guide useful,

cuckoo <Character ID>(Mother) <Character ID>(Father) = Impregnates female by male. – hides ‘true father’ and if husband is not father, husband will believe the child is his.

give_title <Title ID> <Character ID> = Gives title to character including vassals and everything beneath.

charinfo all= Shows debug information about characters including Character ID

observe = Allows you to *observe* the game without playing. Use the play character cheat to get back into gameplay.

marry_anyone = Toggle ability to marry anyone.

neg_diplo = Toggles sending of diplomatic proposals that will be refused.

help = list of most of the commands. Using ‘help’ followed by a different command, eg ‘help marry_anyone’, will display what the ccommand, in this case marry_anyone, allows you to do. This does NOT work on all commands however.

Useful Vanilla events listed below. Dragon events and the such like are not in this section.

event 55000 = converts province to your culture. If you character is leader of an army, in any province other than your capital, it will convert that province, otherwise it will only do this to your capital.

event 20000 = converts province to your religion. If you character is leader of an army, in any province other than your capital, it will convert that province, otherwise it will only do this to your capital.

Events to do with AGoT dragons.

event dragon.5 <Character ID> = successfully hatch an egg, works with dragon eggs born from previous dragons you have or your kinsmen may have given you.

event dragon.1099 <character ID (OF THE DRAGON WHO WILL GIVE BIRTH)> = (Do not include the ( ) section of that charcter ID for event dragon 1099. Dragon will produce an egg, which it will then give to its rider, or in the event of it having no rider, will keep itself and eventually hatch itself.

furthermore, dragons that are wounded or maimed have a special trait, different from the one used for human characters. eg wounded is wounded_dragon

This is a short list of useful AGoT Events

event unoccupied.4 <province ID> = Colony in that province will increase to Advanced colony, Advanced Colony will go to a normal province.