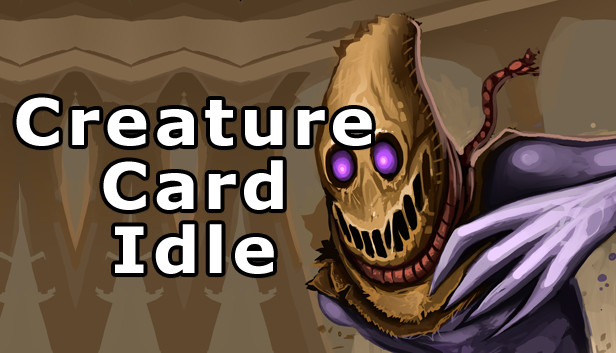 This guide should help you nab some of the most ‘meta’ builds for the first three zones (and a blurb about the fourth, I haven’t forgotten!).

In terms of idle games, Creature Card is not a complex or longer lasting one. The gameplay loop is pretty straightforward of setting up, and letting offline progress build up some of the work for you. If you follow a guide like this, your hour count may be much smaller than on other idle games. Still, I enjoy it, and as of this writing the Dev seems pretty active in making sure expansions come out at a reasonable rate.

I will be sure to note that a lot of this will be variable depending on your card’s levels. Some tier 1 cards could potentially be better than higher tier placements if you spent a lot of time grinding it out. In addition, I’m sure other players have figured things out that I have not.

I have no concrete advice to give to you on gem spending. Before a recent updating adding bonus chances to gain certain rarity’s, I spent a good majority of mine boosting assassin’s and rogues in the Plains of War zone (and I’ll talk more about that later).

The intro realm is, as you can probably guess, the simplest. You’ll start with some basic ♥♥♥♥♥ ghouls and you’ll have to deal with that for a while. Ultimately, there’s only one “true” build that has the absolute highest yield, and there’s only one variable with it. 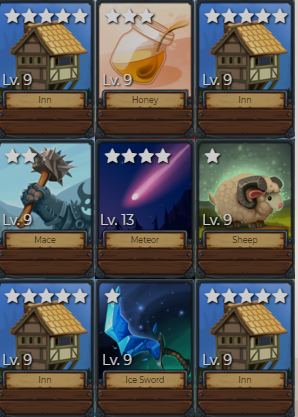 The meteor has the highest yield, and every other card serves to buff the everloving hell out of it.

The only variable here is Golems can take the four corners if they’re a high enough level on their own, because their little perk is that disables and penalties don’t affect them. For me, however, my Inns typically add a higher yield.

So you might be wondering what to do until that kind of money starts flowing in? Honestly, I encourage you to just have fun in tier one. I’ve found that Crab/Mushroom combos can work pretty well early on. But fiddle a bit, if you’re not following the full guide right away you’ll need to ‘practice’ playing around anyway.

Haunted Woods is where things start to get interesting. It took me a while to figure this one out. I’m going to show you the build I ran with for a while, then I’m going to post three others that I found by haunting the game’s discord for a bit.

In terms of tier one gains, I usually run this to gather up some basic resources; 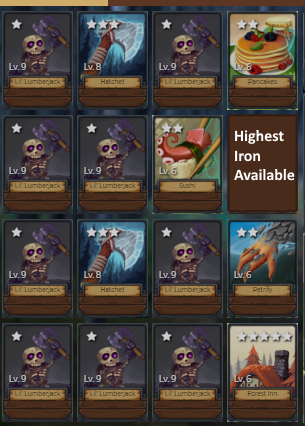 It’s not a perfect build and it depends on what you have available. As the image implies, that spot is for your highest iron producer available. Hades is a good choice, and he’s in tier 1 but he’s also a 5 star rarity so you might not have him right away.

The other solid choice is this build, which switches the priority from wood to iron. It also involves a lot of Hades, but it’s all still tier one which is the cheapest cards to buy off the bat. 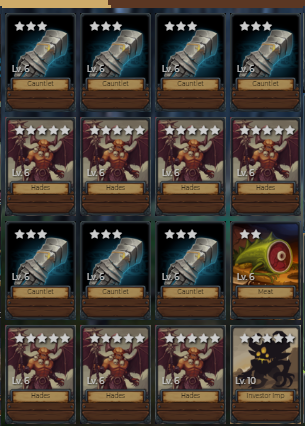 Once you start swimming in some real resources, you might need to save multiple builds to focus on iron and wood exclusively, which will help you get those gems between play sessions as you let offline progress drown you in that phat cash. I am very white. Anyway, the wood build I use is thus; 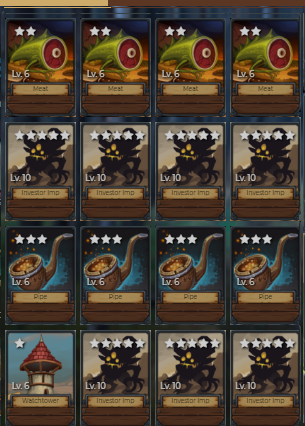 I will reiterate the original point that some of this depends on what levels your cards are. I actually personally have multiple wood builds but right now, the above is pure tier one but it’s much stronger than my tier two wood build because I’ve spent more time getting them and upgrading. So again, you may have to finagle your own builds to find your own sweet gainz.

Anyway, here’s the one I use for iron, which does utilize some tier two cards. 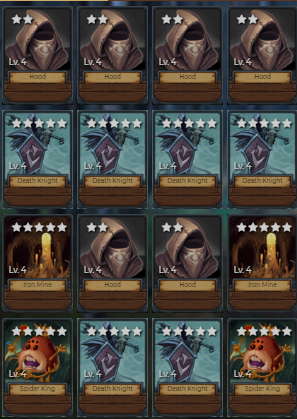 This one is interesting because the Iron Mines on the sides negate wood penalties, so this one generates pure iron without having to need a stock of wood to pull from. However the above is an exclusively tier two build. So work on the other builds for a while until you can generate some good card packs.

This zone is pretty nuts and probably the first actual wall you may run into. Once again, it adds yet another resource to balance but unlike the zones surrounding it; All card parks require an absolute equal amount of dosh to buy so the name of the game for zone 3 is to make sure you’re generating all three resources relatively equally. There’s always going to be one that runs away from you, but still.

This zone is both easy and hard. The builds involved are quite simple, but it took me far too long to actually poke the discord and shake some decent builds out of it. So none of these are really mine, but the result of begging chat for “what the hell do I even do here honestly” after far too long.

The easy part is, there’s really only three or four big metas you have to focus on. Each tier based, so there’s not a lot of intermingling of tiers with this zone, unless you just lack the cards necessary.

For tier one, try to get this one going: 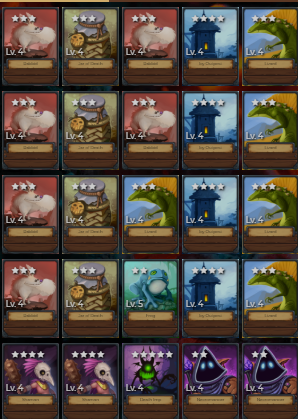 With most of it at level four, I have around 400 production on all resources (with some variation). Not a bad start.

Your tier two build should look something akin to this; 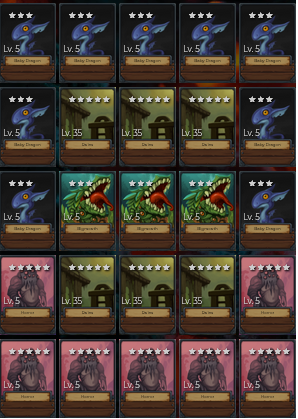 The ruins can be a real jackass to get over time, being a five star rarity and the most important component of both the tier two and tier three builds. Work on getting them, as they add major bonuses to all three resources. If you manage to get a couple but don’t have everything needed for the next build, I end up replacing some of the tier one Fisheries and Jars of Death with them, because its boost will almost always be higher. And it hits all three resources. So if you get lucky on tier two cards, be sure to plug some of them into the tier one build.

Ultimately, this is what you’re going for in tier three: 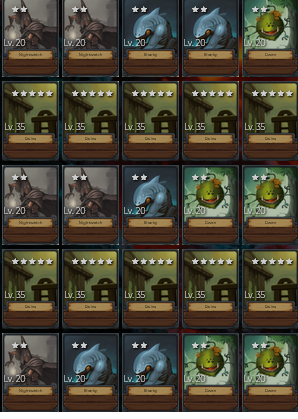 I’m currently in mid ascension with this zone, but following these builds (and remember – variable card levels), my gains go from around 400 in tier 1, something like 2k in tier two, and jumps massively to around 20k on the tier three. All based around the ruins. It’ll take you a good while.

This one is interesting. It introduces a completely new mechanic. You’re now basically playing a proper RPG, and each card has a specific slot it must be plugged into.

This is also where my own knowledge of the game becomes a bit spotty. Some of my intel is lacking for the time being. 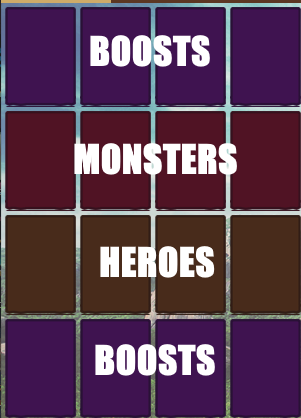 The purple zones will boost your heroes, but they can also boost monsters with extra effects, which the tooltips will let you know. If used on monsters, boosts typically give extra loot, while certain boosts have better use on your heroes.

Here’s a couple of the builds I run, with explanations. 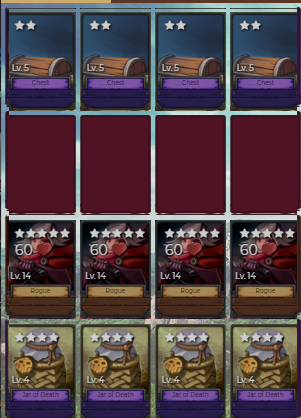 I found rogues to be incredibly valuable to start with. They are however a five star rarity so it may take some time getting all four of them going. They’re also the first thing I really spent my gems on, getting them boosted will carry you a fair ways.

I use the chests because they give the highest loot bonus in this tier, that I’ve been able to find. (Sing it with me now; depending on your card levels)

I also use Jars of Death in both tier one and tier two because it gives bonus criticals and… What I assume to be their damage. So they have a chance to do, presumably, double damage. In terms of hero boosts, other players will sell the values of the Potions, as they’ll revive your heroes so they can keep attacking without ending the “round” in the monsters favor, which by the way, leads to absolutely no gains. So keep an eye out on that, if your monsters are out DPSing your heroes, then you need to downgrade your monsters to something you can actually kill.

In terms of monsters… I haven’t found the meta here. Use the highest yields available and whatever you can kill in proper time. My rogues and assassins are gem-boosted so they do most of the work for me, and I just swap my monsters out depending on the resource I need. The card packs require quite an uneven spread of resources so just… do whatever you need at the time.

Anyway, in tier two I switch a couple things up. 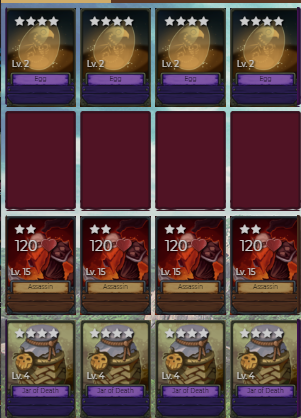 Replace Chests with Eggs whenever you have them available. Eggs are four star rarity so you won’t be swimming in them right away. Eggs have very high bonus loot percentages, but they also add a ton of hitpoints to your monsters. Boosts are usually trade-offs like that. It’s right there in the name, after all.

Again, if you find your heroes are taking damage, some players suggest potion-ing your people up.

And this, ladies and gentlemen, is where my knowledge dries up. I have very little Tier 3 intel to give you, but will happily add in some further screenshots and descriptions as I learn things. As the newest zone, the discord’s chat isn’t very robust at the moment, but I have seen people use the Desert cards to boost their heroes (It adds bonuses to every stat, which is useful).
If there’s a tier three equivalant to the rogues and assassins, I am yet unaware of it.

Either way, this guide should help you blow through the first few zones with relative ease. Feel free to comment on your best PoW tier three builds. In the future, as zones come out, I’ll try to upkeep this guide.