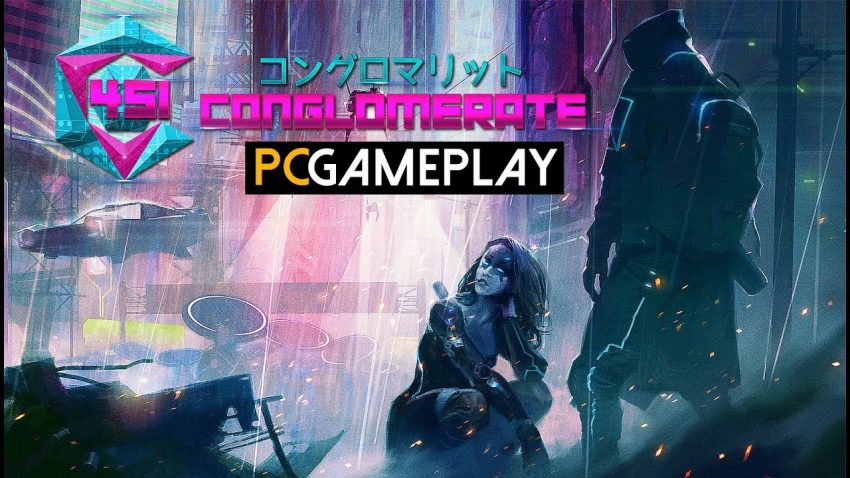 This is the complete strategic guide for Conglomerate 451. It provides useful gameplay information, a guide tutorial, as well as a list of Tips & Tricks that will help you adopt faster to the requirements of the game.

Conglomerate 451 is a Grid-based Roguelike in a Cyberpunk world. You will be the Director of a special Agency and your mission is to eradicate the corrupted Corporations forces from sector 451. In order to achieve this goal, you must send a squad formed by special agents to the field, to accomplish different missions.

The tutorial mission is straightforward: following the Ego’s instructions, you should defeat the first three enemies met on the city’s streets.

After the first combat, you need to find an elevator: using it you will reach the Lab, where the mission is set.

In the Lab you need to:

Congratulations: now you are graduated as Agency Director!

Note: if you select to skip the tutorial some of the points above will be slightly different for narrative purpose.

After the tutorial, you will meet a bunch of NPCs.

The first is Clarisse, a protocol droid acting as your personal assistant. She will ask you to choose a cool name for your Agency and a logo.

The second one will be Elise Delacroix, the chief of staff of your cloning center. She will explain to you what the battle clones are and how to create them.

If you want to skip this section quickly, you can ask her to do in “Auto Mode” your first three agents.

Note: in any case, an Agent is always slightly different when you clone it. That’s because cloning technology is not perfect.

After you assemble your first squad, you can go around freely in your agency and meet the other NPCs who are working for you.

Every time an agent will gain enough rank points, you can promote him/her to the next rank level. Based on the level reached, you need to choose an Archetype or a Path. Both will unlock special perks for the agents, passive skills used during combat phase in mission.

Please note: some Archetypes are available only for certain classes.

Every agent has a chance, at the end of a mission, to master one of his skills. A mastered skill is a more powerful version of the basic skill.
After unlocking a mastered skill, it will become available for all other agents (both new clones or the older).

In order to level up your agents, you can upgrade their Skills, their Weapons, their Shields, their Cypher Decks or you can install Cyber Limbs on their bodies.

The Diplomat and the Events

After a mission there is a chance that the Diplomat will contact the player, to ask him for some favors. Sometimes, instead, it will be Clarisse to ask the player to solve management issues in the agency.

When you will be ready, it’s time to jump in your first real mission!

The missions, in Conglomerate, are divided into 5 different types. Completing the first 4 types you will “attack” one or more corporations, weakening their influence on the city.

The mission is divided into two different phases: in the District and in the Mission’s Location. In the District, you must go around the city’s streets in order to find an Elevator that will bring you to the mission’s location.
Note: after the first mission (the real one, not the tutorial mission) you can choose if starting the mission directly in the target area or in one of the city’s parts.

The Black Markets
Around the city, you can find the black markets where you can meet strange sellers.

Also, in the city you can find a Terminal: by using it you can buy services to gain advantages during the mission (like, i.e., unlocking the whole map).

You will spend a lot of time during the mission in combat. The combat system is turn-based so you will have a lot of time to think about your moves.

At the start of a turn, the game will create the battle’s timeline to establish the action order. The Initiative stat will determine this order.

Note: if you attack from behind an enemy, he will be ambushed and you will gain an initiative bonus!

During his turn an agent can use:

* After these actions, the turn will end.

Each agent has five different resources:

Pay attention: in C451 there is a permadeath mechanic. If an agent dies, he will be lost forever. Luckily, if an agent reaches 0 HP, he will not die immediately. He will enter in a dying status. In this status, you can heal him. Or you can rely on luck: every character in C451 has a stat called Survival Instinct that can save him if he will enter in the dying status.

The combat system is based around synergies between skills.

To exploit this synergy, you should use on the same target the Death Mark and then the Death Shot.

Of course, there are a lot of different strategies like that: part of the game experience is to discover them.

There are a lot of special effects triggered by different skills, or perks (passive skills), drugs, etc.
A special category are the DOTs (damage over time):

The first two (Radiation and Shock) have a Resistance stats linked to them; if an agent is hit with an attack triggering one of these two DOTs, there is a chance (based on the Radiation Resistance or Shock Resistance) to cancel this effect without consequences.

There are no Resistances to Drain or Poison.