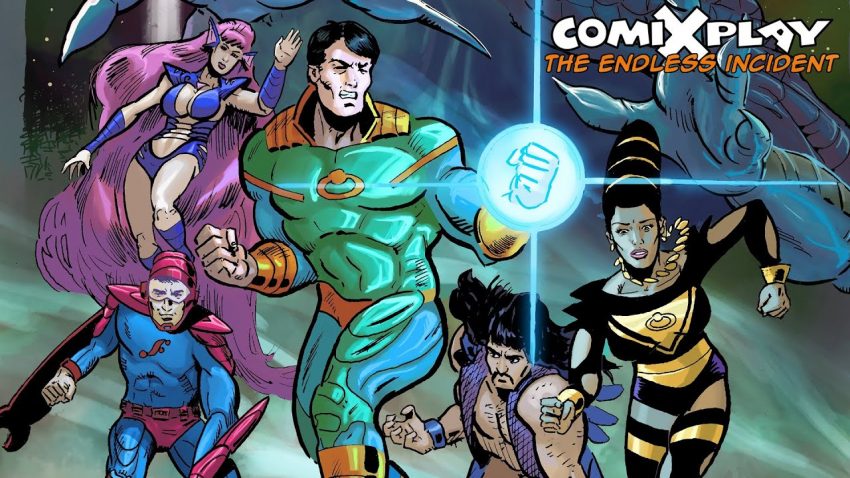 Welcome to SteamAH. Here is a 100 guide with all characters, the key to successs, tips and tricks, and achievements in ComixPlay #1: The Endless Incident.

ComixPlay #1: The Endless Incident is a fairly straight forward turn-based combat game about a team of superheroes called the Solar Defenders. Their story is told in digital comic book format you read in between encounters. Every time combat begins in the book, you take over the characters to defeat whatever it attacking them. Thankfully the game also gives you the option to just read the comic book (if you don’t feel like playing the combat rounds), or just playing the encounters (if you don’t feel like reading).

Honestly there isn’t a tremendous amount of variety in the combat encounters. Each character has a few special abilities which are generally limited. The trick is to figure out which characters work best in each situation.

The six playable characters are:

The Key to Success

Here’s the one trick you need to know in order to have successful fights: Tom buffs Defense, and Forcer buffs Attack, and Nightingale heals. Each character can have up to four Attack and Defense buffs, so all you do is during the first wave in an encounter, kill all monsters except for one. Hopefully the monster you leave alive only has a single target low damage attack. Then each round, have Tom buff Forcer, have Forcer buff Tom, and have Nightingale heal whomever the monster attacks (probably Tom). Have them buff Nightingale’s Attack and Defense too until everyone is maxed out.

You can also swap in other characters to get buffs the same way. It’s generally slower to buff Nebula or Gizmo because you need to keep Nightingale on the board for heals, but you get the idea. Having characters with high Attack scores goes a long way toward defeating monsters quicker, and having high Defense really helps keep the damage you sustain low.

This trick works on all levels except for #1 (because it’s a tutorial), #6 (because it’s timed), and the final battle #9 (because you need to keep your damage output up before getting overwhelmed).

One other drawback to watch out for are the monsters that can copy a hero’s Attack and Defense. They look like large blue demonic lizards with a huge tail. Use Nebula’s power on Tom to take away the Defense they copied from you and then kill them as quick as you can.

Other Tips and Tricks

Halfway Through
Finish level 5 (any difficulty)

Same as above except to need to be on the Hard difficulty.

Nightingale has a special ability that allows her to heal everyone on the team, but she can only use it once. Wait until the last wave and use it just before defeating the final monster. If for some reason your characters are not as full HP when the battle ends, you can reload your game and go straight to the final wave to try again.

The hardest achievement in the game, in my opinion. You start with 26 turns so you have to defeat everything within 16 turns to get this one. You need continuous damage output from all characters so don’t waste time messing with special abilities (other than heal when absolutely needed). I was able to do this by concentrating on buffing Gizmo’s Attack through positioning. On Gizmo’s first turn, move to position 5, then 9, then 5 again to give him full Attack bonuses and have him go to town.

Forcer can also grant Attack bonuses but it’s probably better to just have him attack anyway. Use his Grow ability to fight the large robot, then use his multi-attack when they break down into smaller versions. Don’t forget to use Nebula and Tom to strip away the robots’ Defense, and keep Nightingale close by as you will be dealing with a lot of incoming damage.

Self-explanatory. Hopefully you already got the Quick Escape achievement on Normal difficulty so you don’t have to worry about the time crunch as much when you try for this.

Self-explanatory. Keep Aengus in the fight the whole time!

Specifically, special abilities are the powers listed under the character’s profile image at the bottom of the screen during a combat encounter. All special abilities can only be used once or twice, so you’ll need to do a fair amount of character swapping to use them 20 times. This achievement does not appear as soon as you’ve used your 20th ability, but rather when the fight is over.

The Endless Incident (Easy)
Finish the game (any difficulty)

The Endless is the final boss of the whole game. Every four turns he will summon four new monsters to fight with him, and he will do this a total of three times. This means you have 12 turns to defeat The Endless before he manages to summon his final wave.

The Endless has 1000 HP so obviously damage output is key. Fortunately you have all five characters on the board in the final battle, so your damage dealers should be focused on hitting him as much as possible while your support heroes mitigate incoming damage and effects. A combo that works well here is to have Nebula and Forcer put a shield and a taunt on the same character at the same time, which forces all enemies to attack for no damage for a couple of turns.

Once The Endless is defeated, he falls over but you’ll still need to defeat any remaining summoned monsters to end the battle. If you are having trouble defeating The Endless in time, try it on an easier difficulty.

You should be able to get this just by playing through the game normally.

You should also be able to get this just by playing through the game normally, although it will come much later. Have Tom focus on just attacking for a while if you’re worried he’s not doing enough damage.

You should be able to get this just by playing through the game normally.

You should also be able to get this just by playing through the game normally, although it will come much later. Forcer is your biggest damage dealer so you shouldn’t have any problem with this, honestly.

When fighting a wave of monsters just beat three of them down until they have only a few HP left, then have Nebula attack so she can take them all out. There will be lots of opportunities to do this, although doing it on an early level in the game might be easier than a later level.

Same as above except you must kill four monsters at once instead of three.