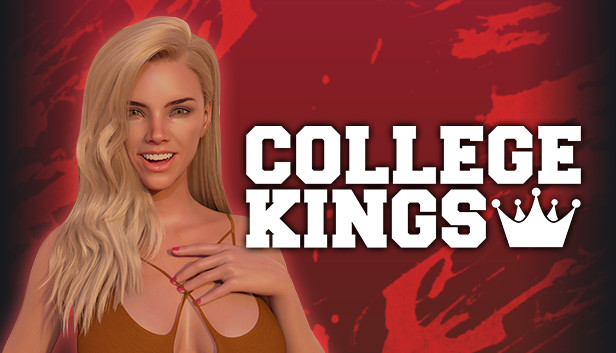 For College Kings players, this guide will show you the current available unsensored outcomes and how to get them, let’s check it out.

FYI: These ways are the fastest ways I have found by playing the game, so you can probably get some of them faster than I did and some of the choices no matter what, but I’ll be going through how I got them myself from the start of the game. (down bad)

Currently in version 0.7.3 there are only 3 girls you can have sex with.
Once with Emily, twice with Riley and three times with AubreySection 1: Emily
Section 2: Riley
Section 3: Aubrey

Emily is the girl that cheated on the character you are playing, the first time you open your phone in the game Emily sends you a message saying she ends up going to the same college as you.

You have a choice to either reply ‘Yeah… I’ll see you there’ or ‘You cheated on me. Go to hell!’

This shows that Emily has cheated on you before the story takes place, but in order to have sex with her you will need to reply the first option.

There is quite a bit of the story to get through to get to the next interaction with Emily. But once you get there you will see Nora and Emily talking in the college hallway, after Nora walks away Emily will ask you to forgive her. If you want to achieve greatness then you should probably forgive her with the ‘Okay, I guess.’ option ;). Then the story will go on and you will go to the hospital with Emily, the choices don’t really matter at the hospital.

Quite a bit of story to get through again after the hospital scene.

You will then get to a scene where Emily is calling you, accept the call, she will then invite you to her dorm. And from this point you can either be understanding or get mad at her, either way she will kiss you. You can choose to kiss her back or push her away, if you’re down bad like me then you would choose the kiss her back.

And this is how you have sex with Emily. 🙂

READ:  College Kings Act I End of the Game Saves

Once again there is quite a bit of story to get through again after the dream scene. The next time you see her is when she is with Ryan and comes to your dorm, you have a choice to compliment Riley or agree with Ryan, when I did it I complimented Riley.

You will go to a picnic with Riley and Ryan. Walk away from the picnic and Riley will come after you, she will ask you about Chloe and make sure to choose ‘She’s into me’ or you won’t have an option to kiss Riley. Shortly, you will have the choice to kiss Riley.

She will then ask you about the picnic and you can either take responsibility or blame Ryan, when I did it, I took responsibility because it makes you seem like a mature college young educated adult B). As she is leaving your dorm you have a choice to ask her to sleep with you in the dorm or don’t ask her, I am unsure if this affects future interactions with Riley but I chose asking her to sleep with you.

Once again, bit more story to get through until the next scene with Riley (bruh just let a man get some cooch)

After a bit of story, you will then have another dream where a psycho killer has Lauren and Riley at gunpoint, again, not sure if it affects the relationship with her but I chose to save Riley.

Soon after, you go to a college poetry thing (who cares) and I think the choices you make in this scene affect how Riley feels about you as a person. The first girl, you should choose to praise her. The second guy talking about random bird noises, I chose to mock him. And the last girl with the huge ego, I also chose to mock her. Riley will ask you go on stage, and of course the brave man you are you go up on stage. You can either act out a lullaby or make something up, I chose to make stuff up.

Next time you see Riley is at the Wolves’ frat party, you should talk to Riley and ask her something, she will ask you to walk her home. Go through all the story stuff and after you can choose to walk Riley home or chase after Nora, the amazing guy you are, you walk Riley home and flirt with her, she will ask you come inside her dorm. Turns out her roommate is sleeping and she doesn’t want to wake her up so you get blue balled and see her another time. But after this scene you somehow finally get her number and she unlocks a social media app for you :).

You go inside and she just starts sucking on your poorly rendered punisher, nice! This leads to nice and pleasant sexual intercourse. B)

She seems like she’s been passed around a lot because the first free roam scene you get, you can walk into her getting raw dogged in the dorm opposite to you lol. Maybe she’s just freaky who knows.

The first time you meet Aubrey and speak to her is at the Apes’ frat party. This scene happens no matter what you choose since it won’t let you go past the first room until you talk to Josh and Aubrey.

She speaks to you and she seems pretty chill, you can either flirt with her or just choose the other options but I’m pretty sure they don’t affect the chance to have sex with her, probably just flirt tho ;). She then talks about Grayson which no one really cares about and after the conversation you can enter other rooms and or exit free roam.

After the scene where you can fight or walk past Tom (the dude who you blue ball after he talks about rocks/minerals to Chloe lol) insulting you, Josh sends you a message on your phone. The message Josh sends says Aubrey wanted your number, I chose the second option which pretty much gets you her number.

After some more story, Aubrey texts you asking you to hang out I’m pretty sure no matter what you reply you end up going costume shopping with her. Then Penelope will walk up to you on the street, you can either choose to postpone Aubrey for Penelope (gains you nothing) or you can reply to Aubrey saying you’re on your way.

You are now costume shopping with Aubrey. Feel free to try on all the outfits and peek on Aubrey, the first outfit triggers the scene where she catches you peeking on her changing, you can legit just apologise and she’s fine with it :), but if you deny it she will be mad for lying lol.

After more of the story and learning fighting moves with Imre, Aubrey messages you asking you to come over, there’s not an option to say no so you are on your way to see Aubrey. You enter her room through the window and you guys play Truth or Dare, it doesn’t matter if you pick truth or dare. You are then given an option to kiss her or stop it, we all know what the obvious option is B). This then leads you to your first sex scene with Aubrey.

After some more story, Aubrey gives you another random call asking you to come over, if you choose to go, you pretty much just end up having sex lol. This is the second sex scene with Aubrey.

The next time you see Aubrey is at homecoming, you can either ask her out (when I asked her out she just rejected me but pretty much said come see her for some action) or just see her at the party. Once you’re at the homecoming party go to the left side of the first room and you will see Aubrey and Riley taking photos, click on them and after the dialogue Riley will leave. Click on Aubrey again and she will ask you to go to the bathroom with her. Choosing yes will lead you to your third sex scene with Aubrey where she gives you some sneaky head.

I’m pretty sure you can get this scene no matter what choices you choose throughout the story.

Unfortunately, these are all the possible sex scenes you can get in the current version.

I will probably update this guide once the new version is out and see if there is any new sex scenes (hopefully with Chloe lol). The next patch will probably come sometime in June, and for the Patreons it comes out on the end of March I believe.

Rate this guide up if you’re down bad like me and if you found anything useful even though I’m pretty sure some of the scenes come up either way. This guide just explained how I got to them the first time I got them.

Also, if you’re a girl and you want a cool guy to talk to add me please (asking for a friend) please he really really needs it.

That’s all we are sharing today in College Kings All Sex Scenes [v0.7.3], if you have anything to add, please feel free to leave a comment below, and we’ll see you soon.
Credit to kabal