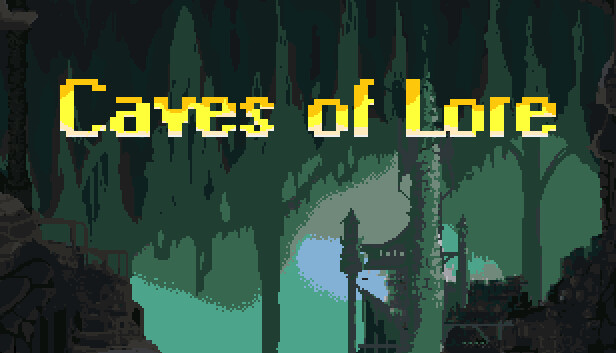 For Caves of Lore players, this guide will help you understand using spells and abilities in Caves of Lore, let’s check it out.

Spells and abilities are similar in nearly every way with the main difference being how they are acquired.

Using Spells and Abilities out of Combat
To use a spell or ability outside of combat, click the action icon (hand) and select the spells and abilities button

The bottom of the Action menu will also have a button for your most recently used ability or spell.

When the Spell/Ability menu is open you will see all the spells and abilities that your party has that can be used outside of combat. Clicking on one of them will use the spell.

Spells are acquired through items being equipped to the character, notably Spell Books. Spells can also be acquired through other equipped items that have enchantments containing the spell.
Some spells require a high enough level in another spell before they are unlocked.

You can view a character’s MIND and SPIRIT in the inventory tab. 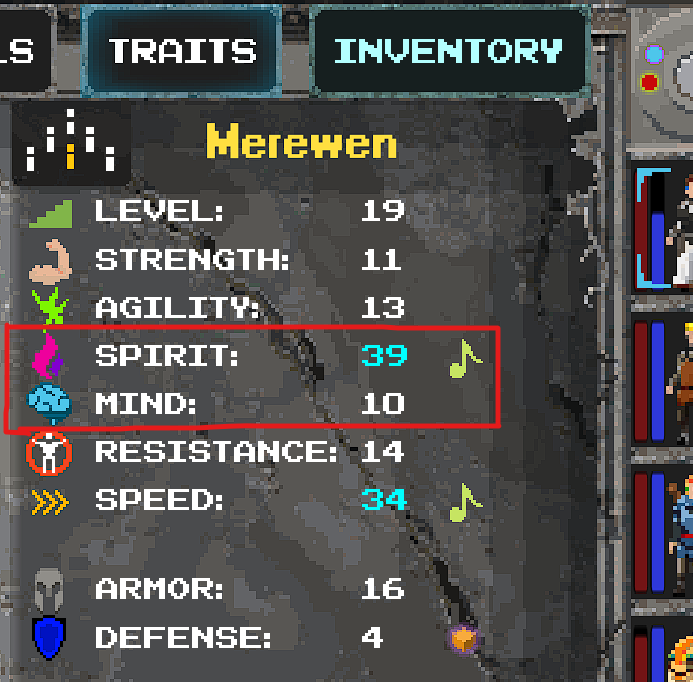 If you do not have enough MIND or SPIRIT for a spell it will show as red when in combat and will have a red outline in the spell tab of the inventory and outside of combat.

MIND and SPIRIT can be temporarily increased from music bonuses at camp and from some consumables, and can be modified by equipped items. Activating obelisks can also permanently increase stats including MIND and SPIRIT.

Abilities do not have a MIND or SPIRIT requirement so this does not apply to them.

Abilities are acquired using ability points and certain characters have abilities that they start with. Ability points are obtained after every 5 levels gained (when leveling up to a level divisible by 5).

The ability tab will show all the abilities you have unlocked as well as a button to buy more abilities. 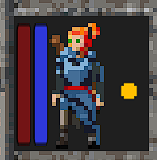 Mastering (Abilities)
In the ability tab, all abilities have either a purple bar (the rightmost of the bars) or a purple outline. The purple bar is the progress to mastery and a purple outline means that the spell is mastered. The mastery bar will fill up the more that the ability is used. Once an ability is mastered, any abilities that were locked by that ability will become available.

Every spell and ability has a mana cost associated with it. When your character does not have the necessary amount of mana (MP) to cast the spell or use the ability, the ability or spell will be grayed out. To increase mana in combat, try consuming a consumable item (can be done via potion icon or through inventory). To increase mana outside of combat, you can consume a consumable or rest in camp. There is also natural mana regeneration. In rare cases there are spells or abilities with variable mana such as summon monster. The exact mana amount you have can be seen in the inventory. 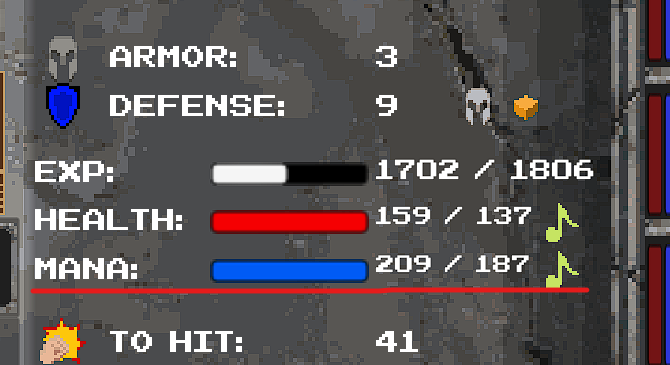 Yes, camping music bonuses can allow you to overheal and overmana

Some abilities and spells have a range that they can be cast in.
Even if a spot or enemy is in range you still might not be able to use the spell there due to a blockage. Certain spells require a direct line of sight to the tile you are targeting meaning there can not be any obstacles in the way. When there is an obstacle in the way, a red indicator will show when the spell or ability is attempted to be used. 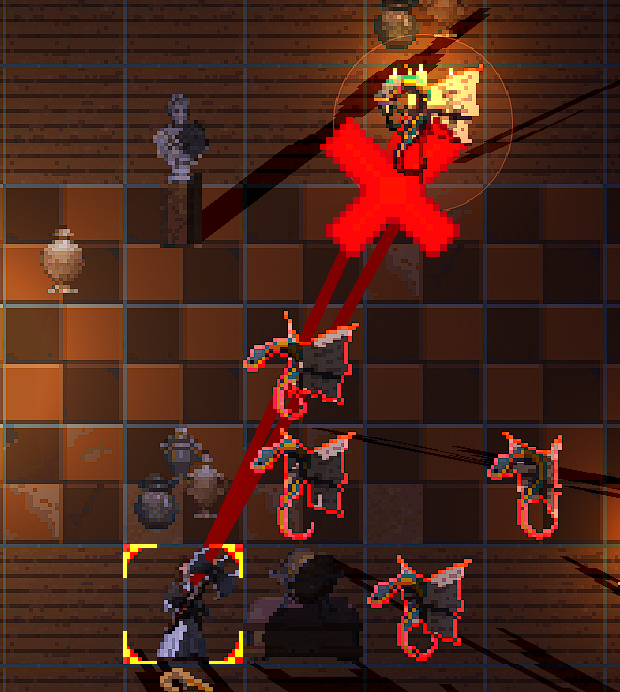 The combat slots make using certain spells and abilities in combat much more convenient. You can choose up to 8 spells or abilities to have in your combat slots.
READ:  Caves of Lore Traits Guide for New Players 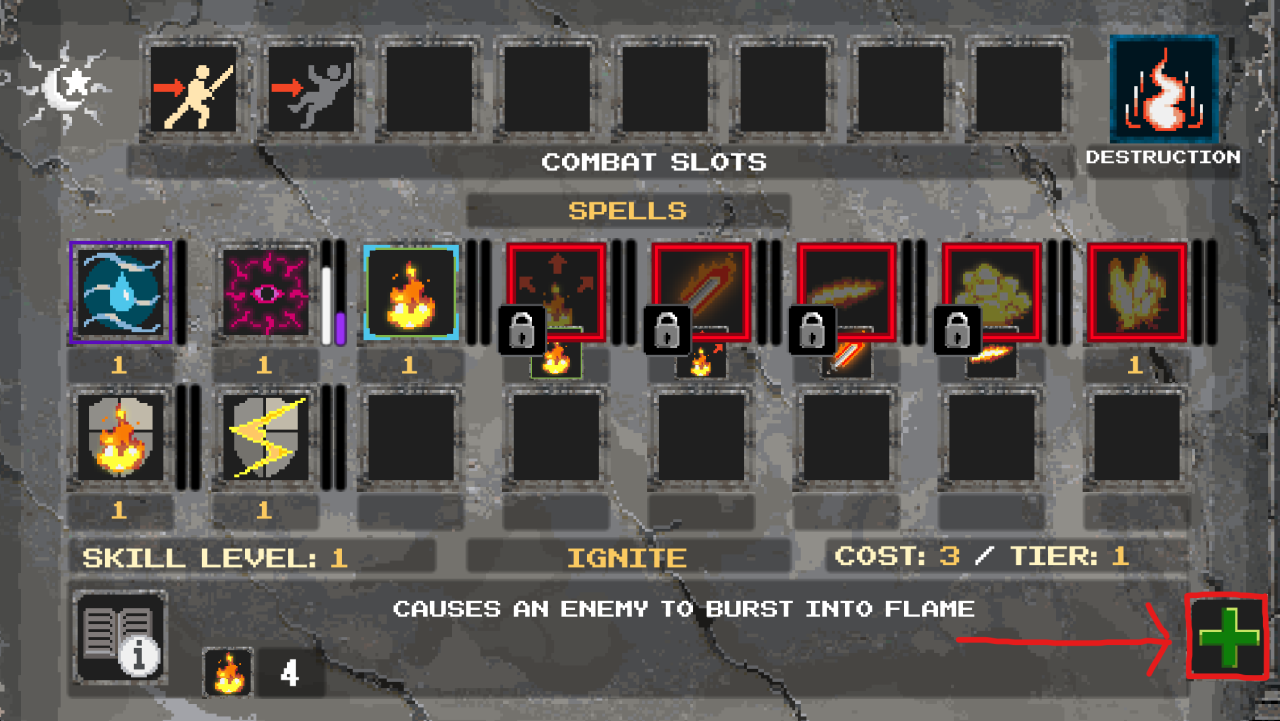 To clear a combat slot, click on the combat slot and press the red “x” symbol to remove the spell or ability from that slot 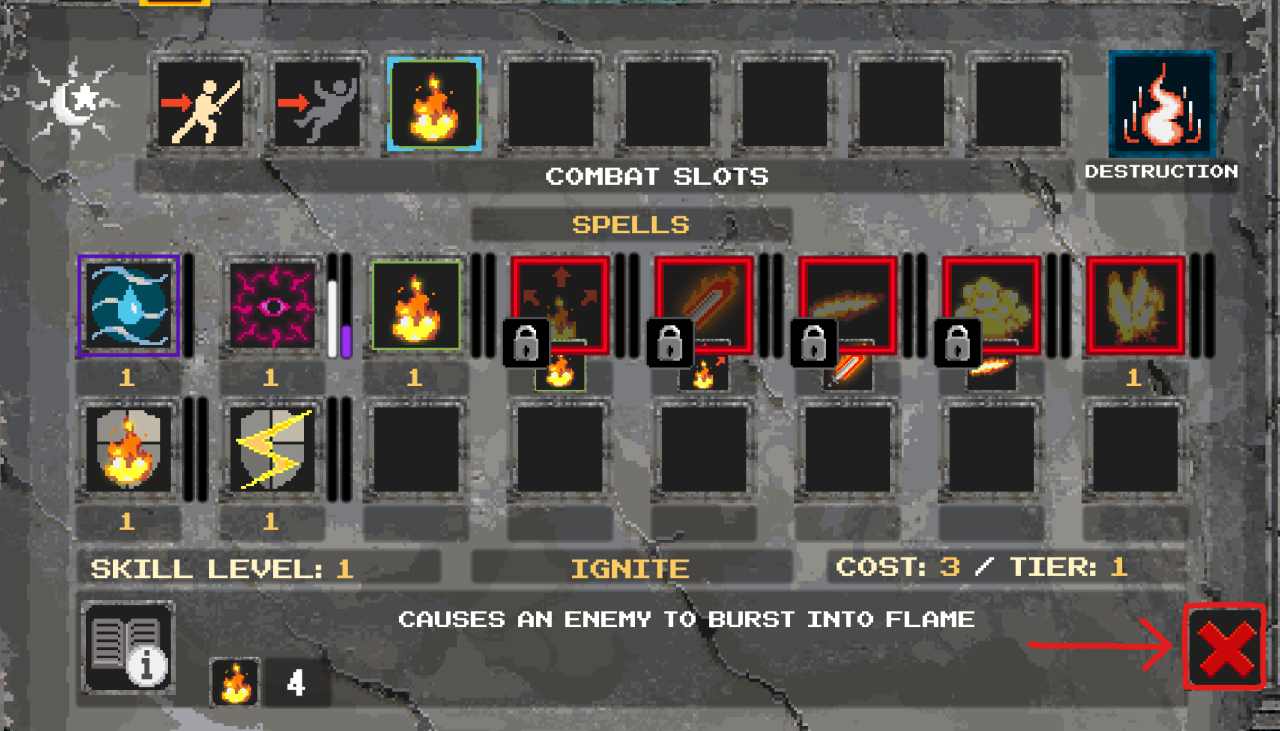 That’s all we are sharing today in Caves of Lore Spells and Abilities Guide, if you have anything to add, please feel free to leave a comment below, you can also read the original article here, all the credits goes to the original author hippolippo