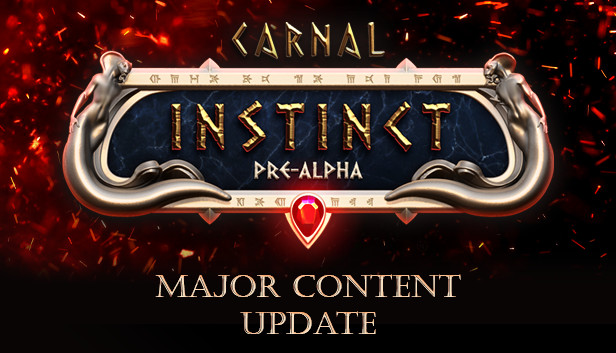 The very first thing I do in a new game is talk to Kahi the Merchant at the docks of anubis where you start the game. you’ll want to purchase a piece of slaver’s finery, and slaver’s fine leg straps if you’re playing as a female or a futa, OR if playing as a male character, male citizen skirt and garb from Haji the Merchant who is located just slightly southeast of the docks. These all come in several colors, and are currently the best armor in the game. (or for males the ONLY armor in the game at the moment). The epic anubite warrior bra and skirt have the same stats as the slaver’s gear, so if you like the appearance of those better feel free to swap them out once you acquire them from defeated anubite warriors, but for the moment you’ll want to acquire these as starting gear. (you may need to have Shadya at the docks pay you to suck you off a couple times to be able to afford everything).

Next, go to your camp (north of the docks, follow the road accros the water and hang a left at the fork, then the next right, sanctuary ruins fast travel point) and talk to the guy there named Apa and set that as your home so you’ll re-spawn there if you die.

The very next thing I do is rescue the weapon vendor for your camp, Naila, located at the bloodseeker camp located due south of the sanctuary ruins travel point. If you’re lucky, while fighting the bloodseekers to rescue him, one of them may drop a bone kopesh which is a huge step up from the bronze kopesh that you start with. If you don’t get one though don’t sweat it too much as you will soon be able to craft much better weapons back at your camp after rescuing Naila. This fellow in particular is very useful in helping you to acquire stronger weapons very early in the game which makes gameplay SOOOO much easier. Don’t worry about using up all of your elixers of life or draughts of life while rescuing him. You’ll soon have the best weapons and armor in the game which will make all future fights almost laughable at least insofar as the game has been developed thus far. I think the highest level opponent I’ve seen is lvl 12 anubite guard that isn’t hostile to you unless you attack them first.

Currently the best weapon type I find is the kopesh, the daggers may be slightly faster, but they do less damage and their reach is limited which I find problematic in actual combat, especially against opponents who have weapons with longer reach like the spear. While the spear has reach, the longsword doesn’t have much less reach, and does more Damage. That said, I still prefer the kopesh over all the other weapon types for the simple fact that it is the only one handed weapon that also lets you use a torch with it while the weapon is drawn so that you can actually see what the hell you’re doing while fighting at night or in some of those dark tombs. It is to me the most versatile of all the weapons with decent damage, speed, and reach, and is one handed. If that’s not an issue for you and you don’t mind not being able to use your torch (or a shield) I would suggest using the longsword instead. Currently the bow is next to useless, especially once you start to level up a little and fight tougher opponents who block your arrows mitigating most of the damage.

So decide on your combat style and start collecting/buying the materials needed to have Naila craft the ornate damascus variant of your preferred weapon type. You’ll need to be combat level 5 (which you’ll likely get to or at least very close to it while collecting the materials you’ll need), 15 damascus ingots, 9 scraps of beast hide, and 96 gold for the kopesh(or 1050 gold total), or 12 ingots, 6 beast scraps, and 115 gold for the longsword (or 871 gold total). if you’re unlucky enough not to get any damascus ingots or beast hide scraps drops anywhere (or not enough) Naila sells everything that you need to craft these weapons though you may need to wait for his shop to refresh as he only sells 10 damascus ingots at a time.

I like to raid the anubite camp just south west of your camp to acquire these items and gold, also, the warriors there also sometimes drop anubite warrior collar/masks which is the only armor piece that you’re not able to buy and comes in three tiers of stats. they are only dropped by anubites. And if you die, you’ll just spawn right back at your camp since you had Apa set that as your respawn point.

I’m guessing that you’re supposed to be able to smelt down bronze, iron, or damascus fragements into ingots using enthrium, but I was unable to figure out how to do this and I’m guessing that hasn’t been implemented into the game just yet, so I just sell these items.

Eventually you will be able to craft a frost forged weapon (you’ll need the ornate damascus weapon variant to do this) after acquiring a frost shard from a quest. However, at the moment the only difference between these weapons seems to be purely cosmetic.

That’s all we are sharing today in Carnal Instinct Useful Tips to Acquire the Best Weapons and Armor, if you have anything to add, please feel free to leave a comment below, you can also read the original article here, all the credits goes to the original author L. Greyson