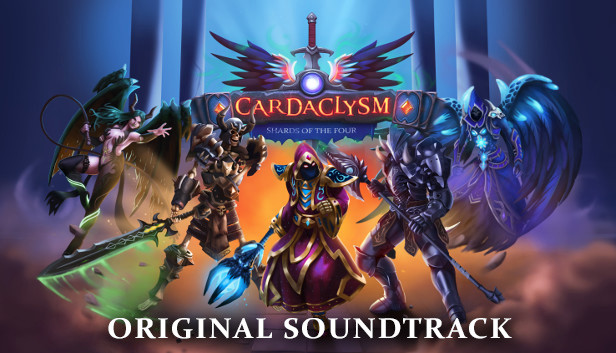 For Cardaclysm players, this is a guide of tips for Cardaclysm as of 07.03.2021. No big deal, just some useful tricks I’ve learned during playthrough.

If you won’t have any bigger problems, finding all shards should take you between 15-20 hours. That’s not all, after you’ll get fourth shard you can go further and challenge Death him/herself for a duel, but this is rather expert level challenge, won’t give tips for death realm.

This game has 5 different Tiers. Each Tier introduces new creatures, and not just a few but many. I’ll just say that after boss fight on your first map of next Tier you can have 6 fights with brand new creatures, not even one from earlier Tiers. What’s more you can challenge boss anytime you want, but game will remind you of fighting Tier boss after gathering 60 Tokens on each Tier.

Tokens are used for summoning creatures and using spells in each fight, it’s simply better to have more Tokens at the beginning of each fight because most fights last 2-3 turns so your first move is almost always deciding. You have also Orbs, which determine number of creatures you can summon – the higher level of creature (1-3) the more Orbs it’ll use when summoning (1-3). As of now I had 8 Orbs on Tier 1 and 2, 9 Orbs on Tier 3 and 10 Orbs on Tier 4. It’s not a great number, with 10 Orbs I could summon 3 creatures on 3rd level and 1 creature on 1st level, but at some point you can get an artifact which makes game easier (later on this).

As for Tokens I fought bosses: Famine with 92 Tokens, Pestilence with 152 Tokens, War with 216 Tokens and Inferno with 272 Tokens. I think it’s a default amount of Tokens for each boss (for War it was 212, my fault).

Every dungeon/map is completable after you’ll find red key, which opens exit doors. After you’ll defeat all opponents, boss will spawn at the entrance, and it’ll pursue you until you’ll exit, or you’ll need to fight it. If you will die during some fight, cards you’ve earned will wait for you on “Graveyard” – meaning next/repeated dungeon will have double prizes.

On each Tier there’re some features and activities in this Interdimensional Bar. On first Tier it’s Goblin Trader (Random trades 2 for 1), Innkeeper (Missions about finding Artifact) and Chest (Just Chest). On second Tier there’s Normal Trader (3 different card offers for 50, 75, or 100 coins) and Monster Hunter (kill sth for cards). All of these activities are repeatable as long as you complete dungeons. On Tier 3 there’s Monster Hunter Guild – it gives you one hard mission for one legendary artifact (Rod, which summons random flameburst for free whenever you summon fire creature). On Tier 4 there’s Archeologist – again one longer mission for a legendary artifact (Robe, which summons Flame Wraith after your first fire creature dies).

To fight Death you need to gather 60 keys, that’s a lot of grind and Death is much more difficult than previous bosses. Won’t say more about Tier 5.

There’s really lots of tips I can give, but there’s a clever way of doing everything in this game, so I’ll just write some of my favourites.

1. There’s only one best creature in this game. It’s a Webweaver, which can paralyze target four times in a row. If you don’t have confidence or aren’t a strategist, look for this creature and get it as soon as you can (available on Tier 1). Halves difficulty of every boss fight.

2. Finish Highmore dungeon, grind it for cards. You’ll get access to this special map on Tier 2, it’ll be available every next 6th map (after you’ll find keys obviously). It’s a special map with special creatures, most of which are super useful and super difficult to defeat at the beginning. From each Highmore dungeon you can get around 10 cards (when you’ll die on last enemy, you can get back cards you’ve earned on first try, if you complete dungeon on second try). I suggest, that during first few Highmore dungeons its wise to gather as many cards as you can. Especially Commanders, Generals, Exiles – cards which either steal life from whole enemy team upon death or are super armored.

There’re many opponents in Highmore, which will hurt your creatures dying (steal life, paralyze) so its important to plan your fight and sequence of killing opponents. I can recommend an artifact – purple Armor which takes 2 hp from enemies after your creature dies, you can leave your opponents with 2-8 hp and just do group kamikaze.

3. Goblin Trader, Random Traveler Trader. Mechanic of these Traders is simple. They want one/two random cards from your inventory and in exchange they’ll give you one/one out of two card. So they choose randomly from 94 cards, which is 14 in your deck and 80 in your inventory. obviously you can discard your cards for some coins, for which you can buy cards from third type of Trader, But! Imagine you prepare your perfect deck for every dungeon using your chest and you have empty inventory. If you’ll gather 80 weak, unneeded cards in your inventory, you’ll have great chance of getting better cards for almost free from 2 described merchants. Your chances are (80/94)*(80/94) in perfect scenario, which gives sth around 70%?

4. Armored opponents. There’re three tricks for those guys. First is stealing health, which is why I had Om-nom even at the beginning of Tier 5 in my deck (takes 3 health from every armored on first attack and has avoid). Second is corruption – each next attack on corrupted enemy takes one more hp (helpful in one boss fight). Third is Burn – through damage, which evades any status changes and abilities (in Tier 3 or 4 there’s a few good creatures, probably Tier 4).

5. Beat every opponent you can, clear every map – it’s important. If you don’t want to meet boss to early, find exit and leave opponent near exit as your last one. Fleeing from battle is free at the beginning of normal fights.

6. Important artifacts. I don’t remember most artifacts names, so I’ll describe them – some are simply game-changers.
-Purple armor – it takes 2 hp from enemies for each death of your creatures, useful almost everytime
-Gray shoulder guards – regenerate 2 hp to your warrior type creatures at the end of every turn. You can have army of indestructable Exiles this way.
-Night cape – Game-changer at night
-Legendary fire duo – after you complete one time missions for Tier 3 & 4, you’ll have powerful assets for fire deck
-Gray boots – creatures cost one Orb less. Most useful artifact.
-Wooden rod for Tier 4 – it gives all your creatures +4/+4, no comment.

7. Don’t level up Highmore creatures too early, for example 2 Commanders are much better than one General. Enemies will almost always attack your armored creature, it’s good to have one in the ring. Look at your enemies before you choose to fight, you can flee for free and some enemies require special artifacts or creatures.

That’s all we are sharing today in Cardaclysm Some Tips, Observations, Know-how Guide, if you have anything to add, please feel free to leave a comment below, and we’ll see you soon.
Credit to SombreroRondO