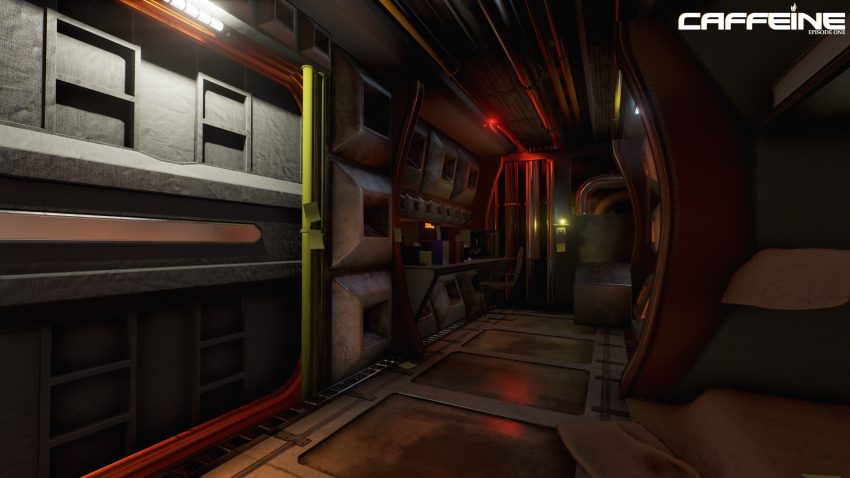 This once-promising game may be buggy, incomplete and basically abandoned, but at least you can get all 11 achievements pretty easily. There are gameplay spoilers here, as I’ve listed both what you need to do for each one, and also how to do it.

– Use a keycard to access a locked door.
This is the first achievement you’ll get, as you need to do this to exit the room you start in. One of the post-it notes tells you the keycard is in the crate sitting on top of the computer monitor; pull the crate down, pick up the card and simply go the door to open it.

– Check out the cinema.
On level 5 which you begin the game on, there is a cinema room, it’s to the left after the crew rooms and left again before the airlock door. To get the achievement, climb over the chairs to the back row up to the alcove where a projector should be. There is no projector, but looking in there triggered the achievement for me. You have to jump onto one of the chairs at the front and hop your way back, it’s a little awkward, but possible.

– Risk contamination.
In the kitchen, opposite the door you first enter by, there is a storage room with a sign on the door frame warning of a dangerous, uncontained leak inside. Go into the room anyway and step down into the liquid for this achievement.

– Remember a simpler time.
When you leave the kitchen via the door next to the contaminated storage, go straight through the red-tinted hall and room (don’t go left) ahead into the dark blue-tinted room, with a cross-shaped floor, mostly surrounded by coffee. There is a pipe you can hop over on one side of the square in the middle of the room, and a book is lying on the floor there. Pick it up and take it back to the crew quarters, to the room with the globe inside. Some people report that you can hold the book in front of the monitor to change the scene, I had to put the book down beside the others at the side of the monitor; either way, it will transport you to a different place and the achievement will trigger. Please note, I had to exit the game at this point because I couldn’t get out of the area again for the life of me!

– Get down to level 6.
For the previous achievement, I mentioned not going left through the door marked offices; go back and open that door this time. You will see the hall floor looks slightly unstable, and is marked with safety cones. Simply walk into the hall and the floor will collapse beneath you, triggering the achievement.

– Try to pour yourself a cup of coffee.
Once you’ve fallen down into level 6, you will next find a room with a door to maintenance, a flooded stairway, and a coffee machine. Place a cup under the nozzle and press the button on the machine for the achievement. It may be possible to get the achievement without bothering to place the coffee cup first, but I’m not sure since I put the cup there first.

– Fix the elevator in the kitchen to get back up to level 5.
A note beside the elevator tells us an inverter is needed, followed by going into the vents. Head back out of the kitchen straight to the end of the corridor and go left to the labs. One of the rooms with a broken floor contains a bunch of metal items on shelves, these are the inverters. Carry one of them back down to the labs entrance, and go straight ahead into the vent access area. The large vent opening is on the right, go in there to the farthest right, and place the inverter in the gap in the green pipes. The elevator is fixed! The achievement may trigger here, or it may delay until you go back to the kitchen and actually board the elevator.

– Descend to level 7.
After you have fixed the elevator and ridden it back up to level 5, step off it and back on again. The elevator will start moving immediately, skipping level 6 and taking you directly down to level 7, and the achievement will trigger.

– Give yourself a flashback.
On level 7, you will eventually reach some hallways with red lighting, and enter a second storage room containing blue crates, similar to the one you will have seen moments before. When you go through the room, you will find the door at the other end won’t open unlike the previous crate room; turn around, and you will see a shadow. Walk into it to change the scene and trigger the achievement.

– Let the airlock timer run out.
This one is the easiest to get. Immediately after the flashback scene, you will find yourself in the airlock with the timer running down. Simply stand and do nothing to get the achievement, it only takes a few seconds.

– Wake up again.
Once you’ve finished the game and the credits are over, restart the game, and flip the alarm switch in the first room again for the final achievement. Some people report that they needed to delete their save before restarting, but I didn’t, I restarted right away and got the achievement without any trouble.

And there you have it. Please consider rating up the guide if it helped you, and feel free to add in the comments any other tips you discovered.