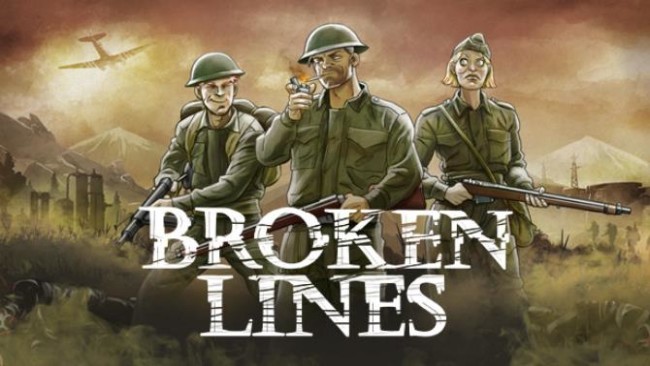 With version 1.0.3 players can now customize their game by editing the XML files. Please read this guide to learn how to do it.

It is now possible to customize Broken Lines.

This is possible through editing the games database and save files (XML databases), that been made available with Broken Lines version 1.0.3

All players can now open the XML files with a text editor/code editor/excel or similar program and then change text and values. After saving the file, they can load the game and see the changes.

The XML files are not obfuscated or minimized and most values have labels that indicate their function (e.g. clip size, rate of fire, etc.).

Also, we strongly advise making a backup of your files, as customizing “overwrites” the game’s normal files. The game can be reset back to normal though, by “verifying your local cache” on steam (apart from your save files).

Customizing can also potentially create bugs here and there. E.g. If you change around too much inside some events that take place in levels, then the game can get stuck this can happen if an event in a level is changed so it relies on a specific character being alive and does not have a “random fall back speaker”, or the given character is dead in your playthrough – so please keep that in mind.

The new folder with exposed databases can be found at: “<install dir>/Broken Lines_Data/StreamingAssets”. This is a description of the files that have been exposed and what they each contain. Generally, all elements are referenced through their ID number.
Root folder

The root folder contains our localization data. Here you will find the flags used in the main menu lower-right language menu and a .csv file containing all the localization text data, for all languages.

This folder contains all our databases of definitions. Each database element might contain references to other elements in other databases. These references are stored as the ID number for the referred element.

This contains all of the campaigns for the game. Though you might see several campaigns in this file it is only the ones with the key “FullCampaign” or “BootCamp_XXX” that will be used.

The remaining campaigns are leftovers from convention demo builds etc.

Each campaign contains some general information about the game over/out of supplies events used and if it should contain introduction days (such as the prologue).

It then has a list of days defined and a list of locations. Each location has three-day indices defined;

What you can edit:
Starting rooster, starting inventory, abilities and resources, when the shop appears, random events on the map, which levels are accessible on which days.

Outcome:
Change the balancing at the start of the game and all content on the map each day throughout the campaign (e.g. make the start much harder or much easier, remove the shop totally or have more levels available each day).

Finally, the Campaign Definition Database also contains a list of merchants that define when Izkor shows up on the map, which items he has for sale and so on.

What you can edit:
For each day the shop appears, you can change the content and the price multiplier of different categories.

Outcome:
Change when in the campaign you have access to buy which weapons/items/resources and how cheap/expensive it is (e.g. access to all things from day 1 – or only access to one weapon type).

This contains all the levels and defines the general information about a level, the par times, how many soldiers you can bring, etc.

Outcome:
Change the balance of levels.

This contains all of the classes used in the game – including the enemies. This also contains all f the base stats for a character. For player characters, the “Rookie” and “Veteran” classes are used.

This database contains all of the actual characters used in the game (e.g. each of the 8 soldiers).

Each element contains a list of references to the assets that characters use along with events tied to that character leaving the camp.

Outcome:
Allow you to mix up characters, change their balancing and make weird experiments with their performance (e.g. make everybody move much slower or much faster or have soldiers always get knocked down when hit by high damage weapons).

This contains all of the abilities and traits. Here you can change the passive stats for abilities. Abilities that have active stats when used usually work by applying a status effect that then holds the stat values (see status effect database below). These elements can be found in the StatusEffectDatabase.xml.

This database contains all of the status effects used in the game. While most are fairly simple with just passive effects, some status effects contain more complex triggers on start/end or proximity stuff.

This database is quite similar to the ability database. Here you can change where a weapon can be equipped, it’s stats, which animation set it uses, etc.

Outcome:
Allow you to create new funny weapons, rebalance existing weapons or change all weapons (e.g. make all weapons effective at longer ranges, give the rifles a knockdown ability, have all grenades always knock enemies and soldier down or have the grenade launcher fire salvos of 20 grenades etc.). Also allows you to change the effect of all covers and “hide-able areas” in the game.

The text file with ALL texts in the game – in all languages.
This categorizes into different tabs and with “keys” describing their usage.
The two databases below have no actual text in them, instead, they all refer to “keys” in this document to look up the text that is used in the game.So changing an event means e.g. adding a new line for text with a unique key, then changing the key in a given event, in the event database, to get the new line to show up.

What you can edit:
ALL of the texts in the game, including UI text, item and ability description, event texts, soldier comments in speech bubbles, etc.

Outcome:
Use your imagination (e.g. possible to modify the personality of each character, add a lot of swear words to the soldier’s reaction in levels, change the language of the enemies, etc.).

This is a big one. This contains the “setup” of all the events available in the game. Each element contains a list of speakers defined through requirements, requirements for when the event can trigger, the rewards granted by the event, and then a list of each text entry in the event (a key).

What you can edit:
Change the content of ALL events (e.g. title, image, dialogue/text string to be user, characters involved, choices, outcome, rewards).

Outcome:
Remove/rebalance some events or substitute events for totally new ones (e.g. create a new interplay between characters).

This contains references for all the info menu entries (the tutorial menu in the top-left).