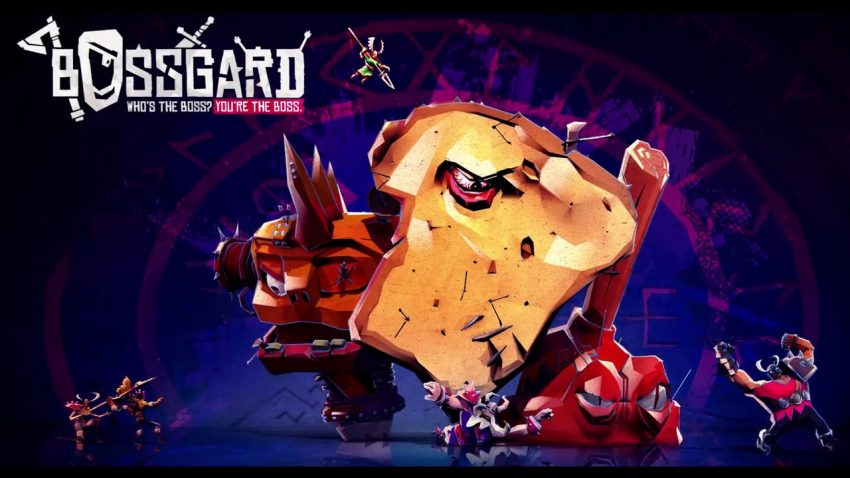 This is a step-by-step guide on how to start unlocking all of the gear in Bossgard and turn your vanilla Vikings into deadly fashion statements. Ready? Here we go.

First thing’s first, unlocking gear involves spending points or currency, and the main currency in Bossgard is Favor. However, Favor has a few gimmicks of its own. 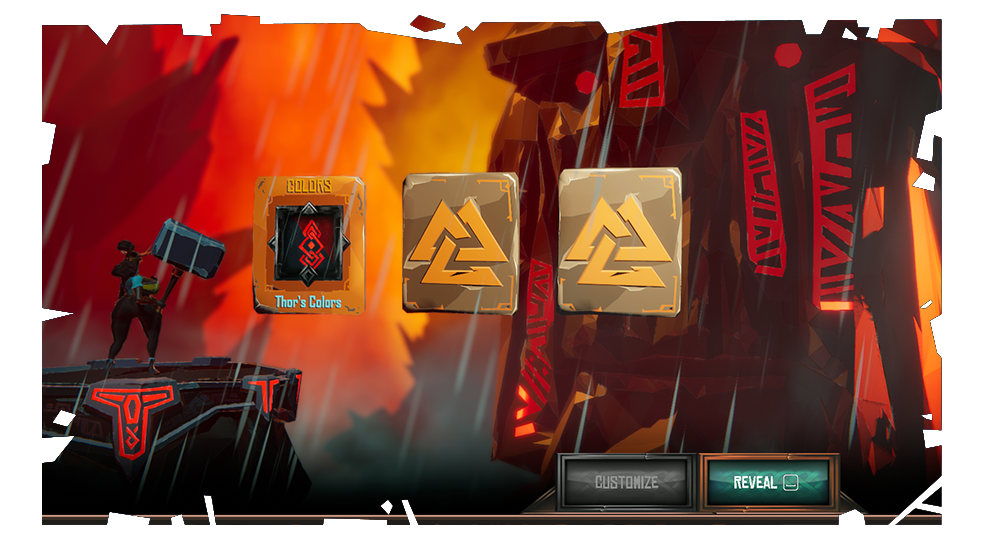 Favor, although being a currency used to unlock gear, has a deeper purpose and a mechanic of its own. The aim of Favor is to reward proactive players and teamwork in general. In the game world, Favor is given by the Gods to the Vikings if they play particular roles, more precise – if they choose certain Rage Attacks. 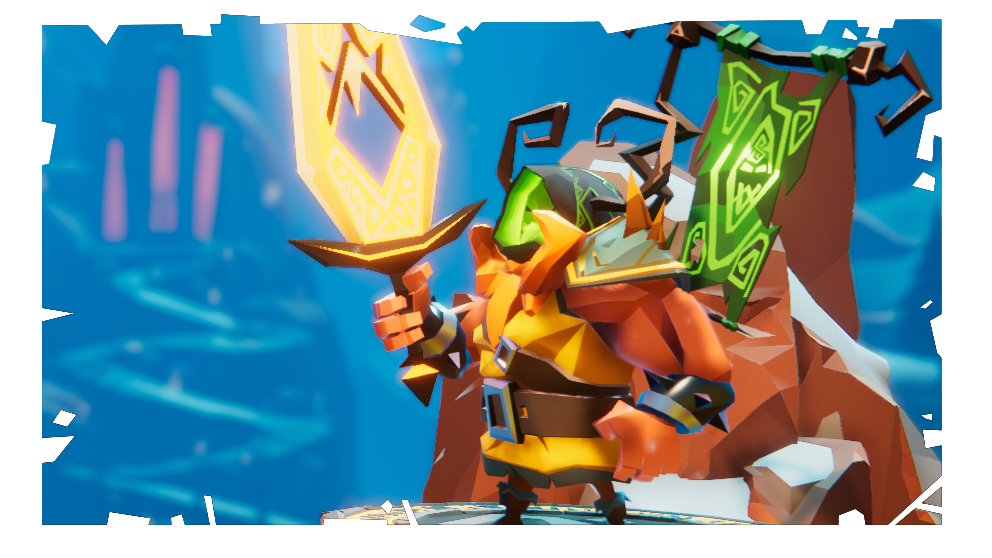 It means that if you pick a Rage you will earn Favor with a particular God. For instance if you play Mighty Blow you will increase your standing with Thor. The more levels you have with a God, the more gear you will receive when you pay that God a visit.

Offensive Rage attacks such as Mighty Blow, Rope and Poison need to hit their target. If the target is hit, that counts as a success.

Support Rage Attacks such as Shield, Berzerk and Resurrect need to protect, buff and well… resurrect at least another player for them to count as successful hits.

Ok, when do I get these Favor points?

Only one Local player may receive Favor after a match. You gain Favor after every match but there’s a catch. In order to receive Favor after a match, you need to be the player who earned the most Favor during that particular match. So for example if you’re playing with a friend and you both have Mighty Blow, you use it 5 times and your friend uses it 3 times, you will earn Favor after the match.
NOTE: This rule applies to local players only! If there’s 3 of you on a couch, only one of you will earn Favor. If you’re hosting or joining an Online game by yourself, you will always earn Favor.

Bosses and Gods are connected, they’re rivals. Fighting certain Bosses gives extra standing with certain Gods. You can see each Boss’ rival God in their description in the Boss Info Panel, accessible through the game lobby. 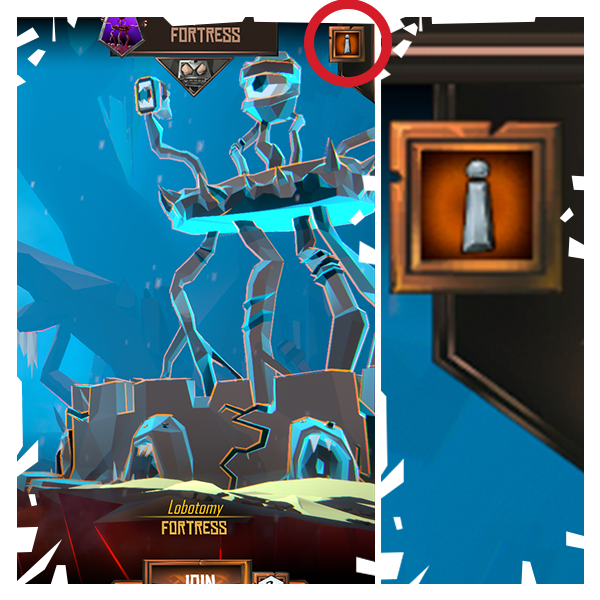 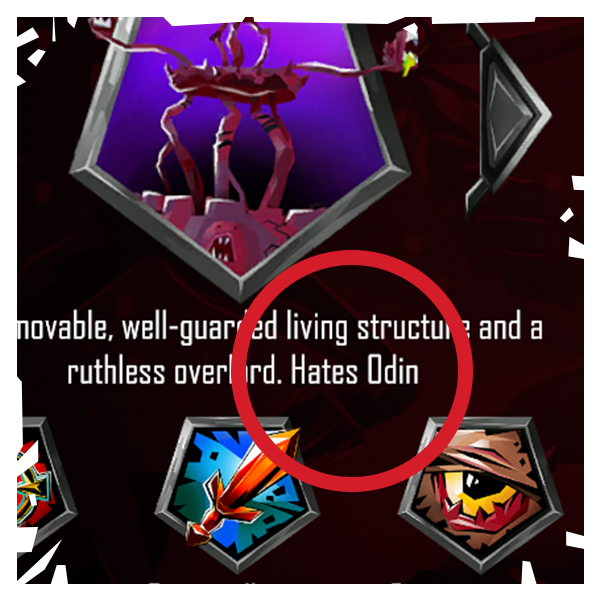 For accessibility’s sake, here are the rivalries between Gods and Bosses:

So for instance if you want to progress in standing with Thor as fast as possible, the best thing you could do is pick Mighty Blow and fight Plunge D. This would yield you the most Favor points with Thor as Thor is both the patron of Mighty Blow and Plunge D’s nemesis God.

We covered how Favor is earned, but we didn’t talk about how much Favor you actually get per God.

When receiving Favor you get it for all Gods, but in different percentages. Patrons and Rage Attacks dictate with what God you progress most, but small amounts of Favor are given for other Gods as well.

(Percentage of Favor gained per God according to Boss being fought) 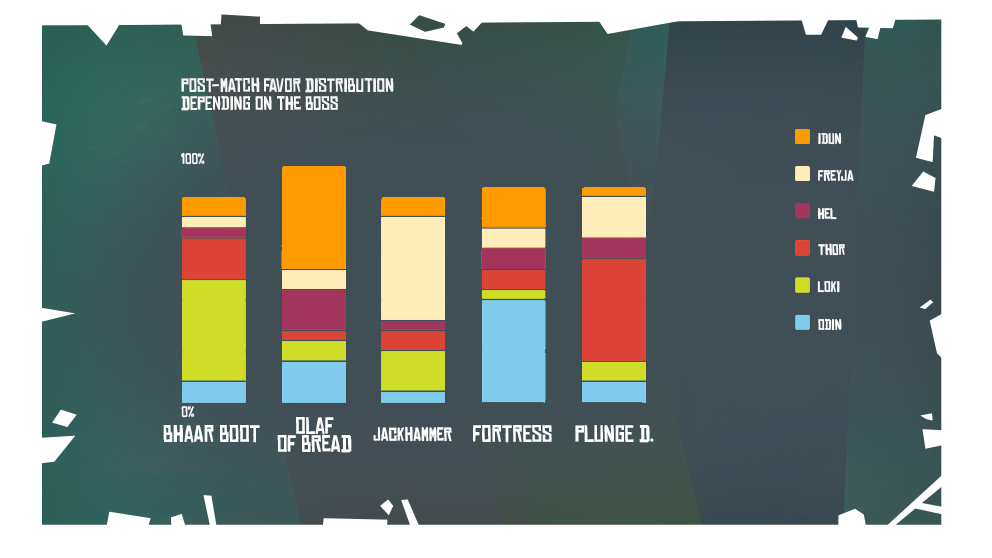 (Percentage of Favor gained per God according to chosen Rage) 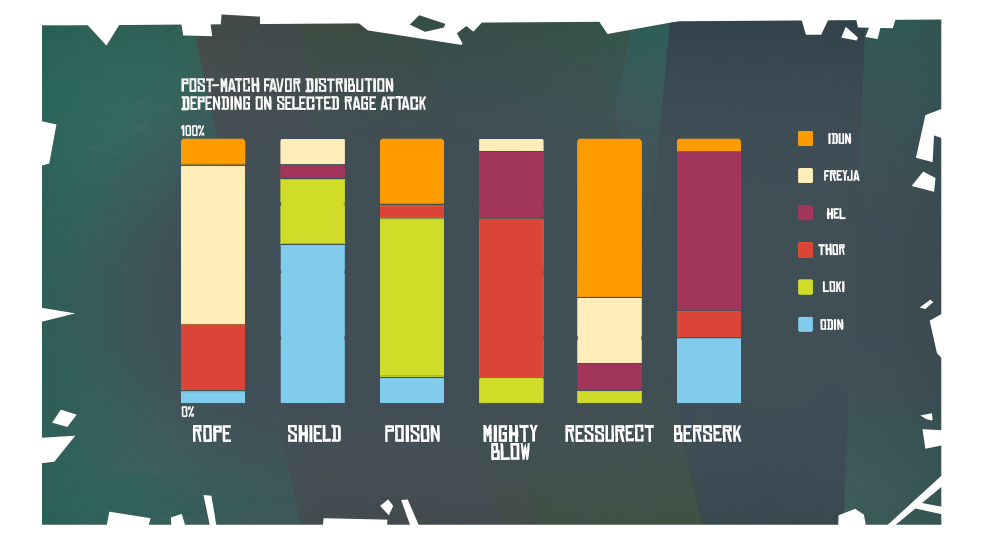 I’ve been gaining Favor, where do I check my standings?

There are three parts of the game where the Favor standings are visibile.

1. Character screen. In the lower left part of the screen you can check all of your Favor levels. 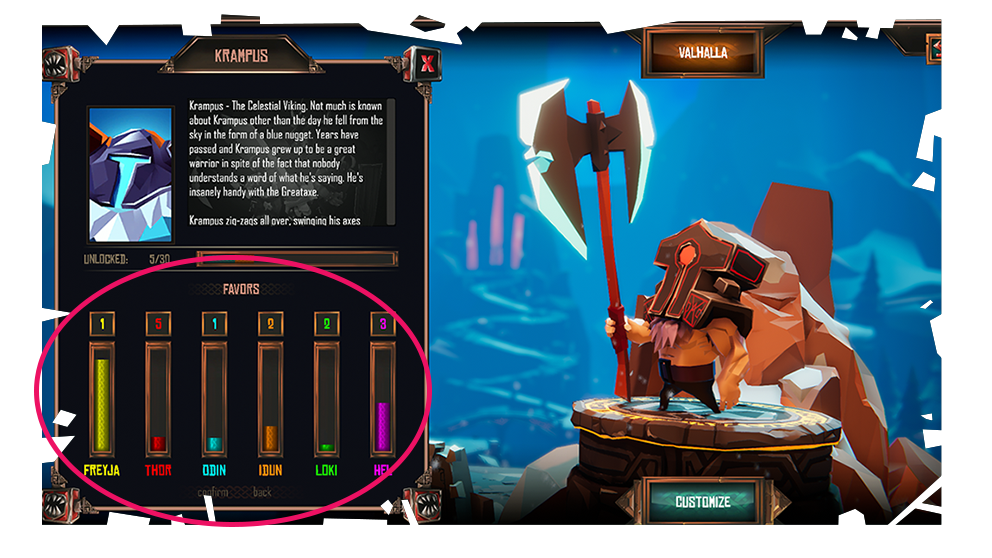 2. Post-match. After each match, a 3D scene showing your Favor standing with the Gods is shown. NOTE: This screen is visible only if you’re chosen to receive Favor. 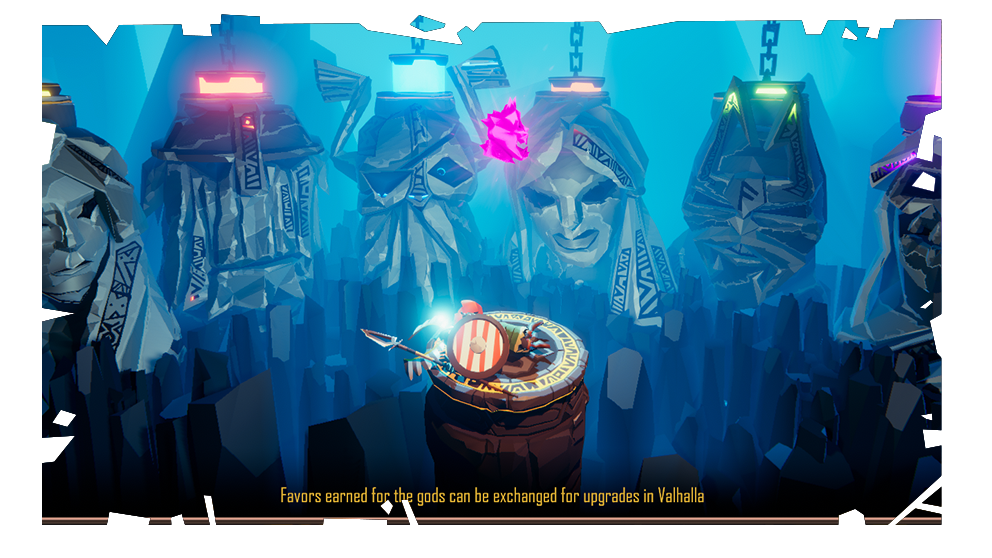 3. In Valhalla. If you go to Valhalla you have a 3D scene showing your Favor standing. You can go to Valhalla by pressing the button above the character in the Character Screen 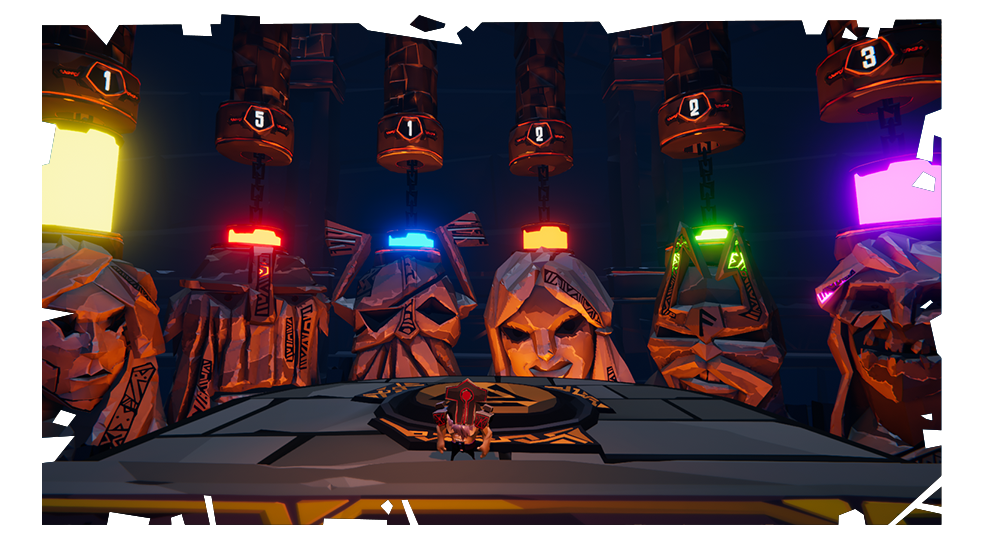 Do these items affect my stats?

Well this is pretty much it, you now should be able to go out there and start earning new gear. Remember, there’s no shame in playing a vanilla Viking, but there is great pride in playing a pimped Viking!

I leveled up. Now what?

Congratulations! Now hurry up and go to Valhalla. You can do that via the Character Screen, accessible from the Main Menu. 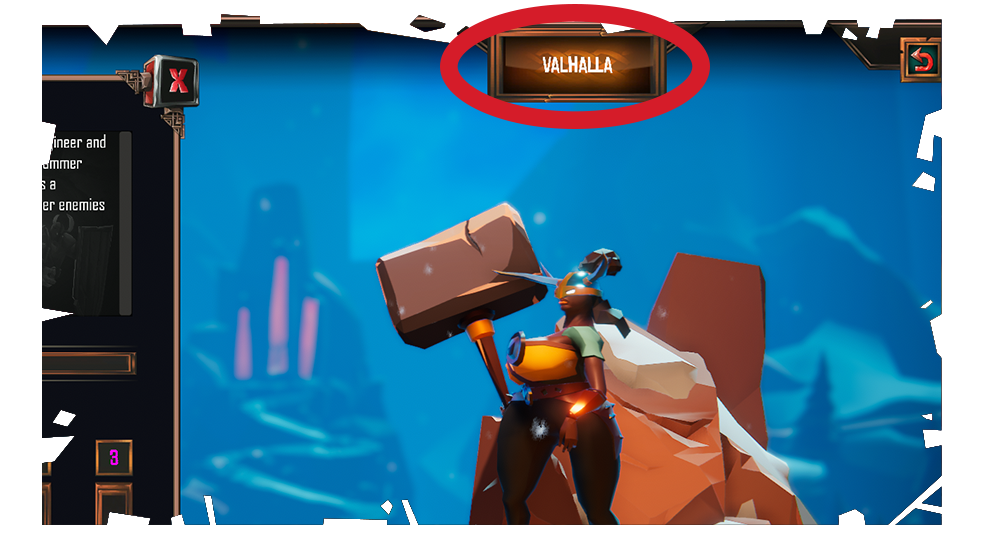 Pressing the Valhalla button will take you to Valhalla, a special place where good Vikings go to earn their new gear, based on their Favor level. 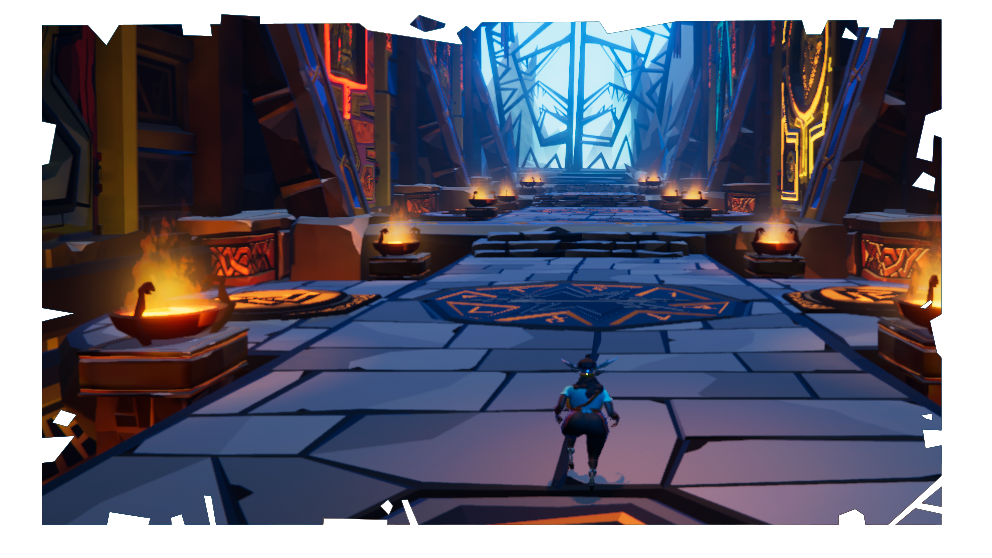 Once in Valhalla, go to the door matching the God you’ve leveled up with. You will be able to open the door and you’ll be immediately taken right up to that God, where you’ll be given your spoils. 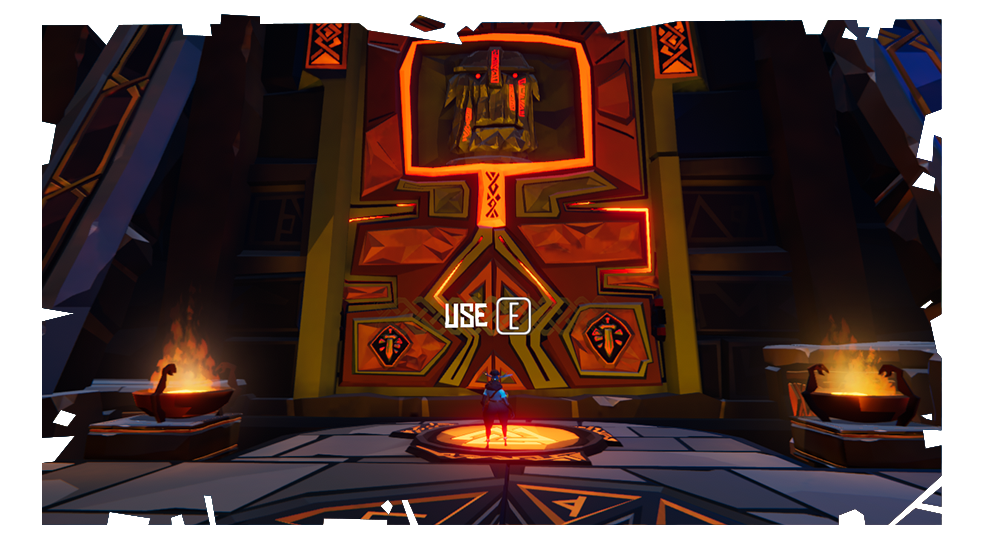 You can equip your new items right here or you can do it from the Character Screen.

NOTE: You can only visit the Gods if you have unclaimed levels. After you claimed the rewards for your levels, you won’t be able to return to that God until you’ve gained a new level.

Written by [BOSSGARD] The Sad Snail