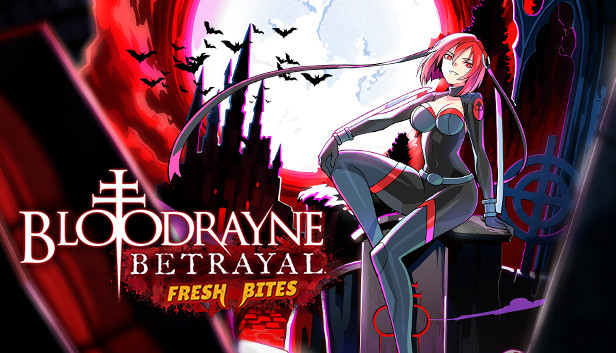 For BloodRayne Betrayal: Fresh Bites players, if you are collecting achievements, this guide will show you how to obtain all 12 achievements in game, let’s check it out. займы онлайн безработным круглосуточно

It should be noted that you can replay levels easily through a stage selection menu, so if you miss a collectible or miscellaneous achievements you can always replay that stage. There are no mid-level saves though, so if you want to safely quit you must finish that stage.

These ones are story-related, so you don’t have to worry about missing them. You finish the game, you’ll have them all.

Flight of the Raven: A mysterious ally helps Rayne.

Drop In: Defeat the Crimson Demon.

Betrayed: Face off against Kagan.

Survived to Sunrise: Complete the game.

In the levels, you will see these red, collectible Ancient Vampire Skulls. There’s a total of 50 of them, and every 5 you collect allows you to upgrade your health or ammo. Some of them can be very difficult to get, while some others very easy. You can exit to main menu after you get the skull you want.

Skullector: Collect half of the Ancient Vampire Skulls.

Here’s a text guide [www.playstationtrophies.org] for finding the skulls, and a video:

Finish Him: Show Mercy.
Sometimes, in combat, you might slice an enemy in half, and their top half is still moving around. Press F while standing on them to stomp them, giving them the release of death.

Just a Taste: Enjoy a drink.
This move is essential. Once you hit an enemy (F) some of them will act stunned, and in that moment you press and hold D. Rayne will suck their blood, killing them and restoring her health.

The Last Bullet: Kill 5 enemies with a single gunshot.
This is easier than it sounds. Once you have 5 enemies on screen, preferably the blue-suited vampires, run to one side and press V to shoot. It will hit all 5 of them, but they will still be alive. Press V again once they stood up to kill them all.

Chainsplosion!: Chain-explode 5 enemies.
You can make enemies explode by following the same method as drinking, but just press D once instead of holding it. The enemy will glow green. Make sure there are at least 6 enemies, and poison one or two of them. Press G while they’re close together, and they’ll explode.

Here is a video for example:

Collateral: Kill 250 enemies with environmental hazards.
Sometimes there are levels that require you to throw enemies to these hazards to progress. There are many opportunities to do this, so don’t worry. Some hazards are sawblades as pictured, barrels, acid pit, lights, etc.

Walking on Air: Hop on 50 heads in a row without touching the ground.
You need the Blood Balloon enemies to do this. They are the big, round ones. To stomp, you must jump, hold the 🡫 key, and F when you’re on their head. Each one of them can withstand 10 stomps, so you need 5 of them. There’s a good place on Chapter 10, but you can probably get it earlier like I did.

Here’s how you do it:

Elite Vamp: Finish any level with the ranking of “Dhampir”.
This is the highest rank available. You’ll have to be very good at this game to obtain this achievement.

Ms. Perfect: Complete any level while taking no damage.
Probably can be paired with Elite Vamp since damage taken affects your score. Best to do both in the first level since the enemies are easier and more predictable.

That Funky Puncher: Defeat Crab Puncher without getting hit.
Crab Puncher is the first boss you encounter, met in Chapter 2. The easiest way is to use 4 bullets to destroy its 2 legs, and bounce on its remaining leg until its destroyed.

Treasure Hunter: Collect a Large Treasure.
A large treasure looks like this, a big hand statue holding a vial. They can be quite easy to find, but if you’re too lazy to explore there’s one directly in your path early in Chapter 9. Hit it once to collect the extra points.

Coffin Kicker: Kick open the Coffin Rocket 20 times.
In many levels, Rayne will start by exiting from this rocket coffin. Try to time pressing F exactly when it lands, and press it repeatedly. Rayne will kick the doors off instead of walking out like normal. Feel free to exit and restart to do it again. Can be done as soon as Chapter 2.

A Foot Face?: Find the hidden idol.
In Chapter 8 you can find a golden knight statue in a secret area. Hit its face to make the faceplate fall off and get the achievement. You will need at least 7 bullets, although 8 will make it a bit easier. Refer to this video to see what to do and where:

That’s all we are sharing today in BloodRayne Betrayal: Fresh Bites 100% Achievement Guide, if you have anything to add, please feel free to leave a comment below, you can also read the original article here, all the credits goes to the original author NassuWrote