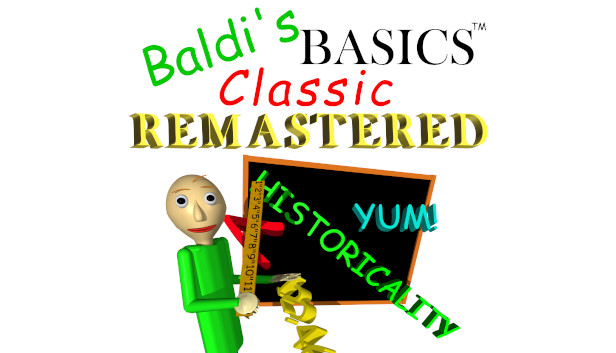 In Baldi’s Basics Classic Remastered, Demo Style All Answers Wrong is a very difficult mode that requires a lot of game knowledge and this guide will help you out.

•This mode has a good bit of RNG and if that isn’t what you want don’t attempt it.
•Using captions is almost required as it helps a ton.
•If Baldi makes a happy face in the bottom left that means that noise is the noise he will currently be heading to, if he doesn’t seem so happy about the noise that means it’s a later priority and he will check it after checking some other things out.
•Baldi does not have temp anger in this, he is extremely fast.
•Turning a corner when Playtime spots you makes her turn around if she isn’t too close.
•Standing by the Bully when the Principal is around will make him go to detention.

Starting Out
You first will want to do a loop around the building looking for items, you want to hopefully have 3 BSodas or 1/2 Bsodas and something helpful such as lock(s) or Baldi’s least favorite tape(s).3rd To 5th Notebooks
After exploring most of the building and setting up you want to get the two center notebooks and the top left notebook in whatever order you can (This can change a lot based on rng so do whatever you think will be best, and don’t try to rush it too much.). If you are given a flood in this process you can either decide to risk it and get whatever notebooks you find, or you can simply use it as a way to be safe from Baldi, loot, or get the 3rd to 5th notebooks. Baldi’s Least Favorite Tape helps a ton during this section.

Last Two Notebooks
From here you want to get the two notebooks on the right (save the center right one for last as it’s by an exit). When getting these two your best bet is to hide behind the machine and wait for Baldi to be far away and then get the answer wrong. (Hiding tips below)

Ending/Exits
From here you want to get to the end of the hall on whatever side Baldi isn’t coming from and you want to use a BSoda on him. (If he gets close before getting close to the end of the hall you will have to use an extra BSoda. While getting the exits without having much good items you are mostly praying for a good special event for the occasion (tips for special events during the end below).

It is possible to hide behind the Math Machine left of spawning in, the one outside the principals office, and the two in the long hall. (Sometimes but not often you can hide behind the middle one but it entirely depends on how Baldi searches the room)

Getting an answer wrong or Chalkles informing Baldi of your location will prevent you from being able to hide so if you are going to hide follow the tips below.

Hiding without Chalkles
This simply requires you to hide before answering the question wrong or hiding in a room you have already done stuff. If you can’t do either of these but want to hide you could get the answer wrong then leave the room. After leaving the room wait for Baldi to see you, and from here quickly go back into the room and hide. This will stop him from checking close enough to the Math Machine to spot you.

Hiding with Chalkles
When Chalkles locks a room and alerts Baldi of your location he alerts Baldi to the location you was in as he starts his annoying laugh which is a little click sound. So if you want to hide in a room with Chalkles make sure to go close to the door when he does the click and return to being behind the machine after the click. (This might not work in the room left of spawning in, at least didn’t once so I wouldn’t rely on doing it in that one at the ending)

SPECIAL EVENTS AT THE END

In the best case scenario you get a special event right after or slightly after the seventh notebook using this event to the best of its ability can save a unfortunate run or help a run on pace.

Gravity
For the Gravity event your best bet is to try and stay on the opposite gravity side then Baldi, waiting at a gravity orb for Baldi to get close forcing him to make a longer trip to get a new one could by you a good bit of time, unfortunately getting this one last does require you to get lucky with the orb spawns.

Leak
If you get the flood event you could either rely on luck and hope from whirlpool to whirlpool hoping for good teleport spawns by or near exits/away from Baldi. On the other hand you can avoid whirlpools and hope they take Baldi away from you instead while you get exits.

Fog Machine
When you get the fog machine event you should continue the route relatively normally, I would suggest trying to stay ahead of him and out of his sight by opening doors for no reason to slow him down as he checks them.

Baldi’s Ruler
If Baldi’s ruler breaks this can either be really good or very useless, if it happens before you or about when you get the second exit the chances of it not recovering in time is next to none if not none. If it happens a bit after getting the second exit continue getting exits as normally and pray no character slows you down enough to end the run.

•Trying to shoot Baldi back with a BSoda while there is wind blowing against the BSoda will cancel it’s affects.
•Baldi seeing you, or you getting Math wrong are above getting sent to detention in priority so you can use this to make the most out of a situation where the principal saw you break a rule or just use it on purpose to your advantage
•After 4 notebooks getting away/hiding from Baldi requires good luck, a special event, or hiding behind a math machine in time.
•Scissors work on First prize and Beans.
•Big Boots stop you from pulled towards whirlpools or pushed on by wind.
•You can still hide behind Math Machines during the ending section.
•Arts & Crafters can be extremely useful after 2/3 exits.
•If Baldi regains his ruler after losing it while standing on top of you he cannot kill you until you move.
•If you hear Sweeper say “Gotta Sweep” at a time where he shouldn’t be sweeping that means either Baldi or the Principal has entered his room.