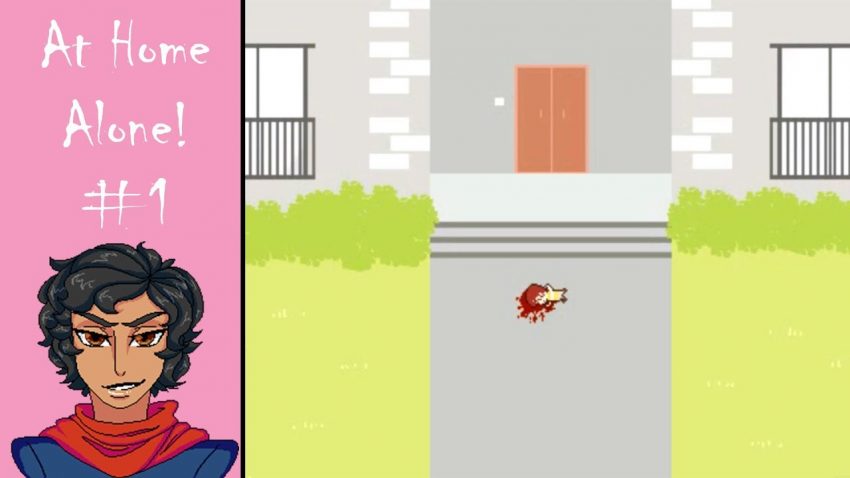 A complete guide on how to get all of the achievements in At Home Alone II.

After being able to use the main character, go to her bed and press ‘z’ or ‘enter’ to get on. Keep pressing those buttons to make her do dance moves until you get the achievement.

你好像很沉迷 You seem to be addicted.
这马桶的声音竟如此的迷人 The sound of the flushing toilet fascinated me so much.

Go to the bathroom and flush the toilet repeatedly until you get the achievement. Only achievable in the first half of the game.

表象or现实 appearance or reality
你所看到的只是其中一层表面 What you see is only one surface.
You should get this achievement after your first playthrough.
If you’ve played through the first game, At Home Alone, it’s the same exact thing as before.

1) After you get back in your room begin to look at things (fridge, keys in kitchen and other things) until the doorbell rings.
2) Go outside and talk to the boy with the red hair, invite him in, go inside and then tell him to sit on the couch.
3) Go to the kitchen, press ‘z’ to interact with the fridge and get the cake.
4) Give the cake to the boy.
5) Go to see who’s at the door.
6) Talk to the blue haired guy (the boy’s brother) and invite him in, then go inside.
7) Go up to the blue haired guy and interact with him, he’ll call out to the other boy and you’ll hear a door slam. The door will ring again, tell him to go upstairs while you check the door.
8) Go outside and talk to the blonde girl with her dog and invite her in.
9) When you enter you will be told not to bring her in, go back out and talk to her again.
10) When talking to her choose the chat option ‘Tell her to leave’, she will.
11) Go back into the house and go upstairs towards you room and interact with the blue haired guy a few times, then when getting in the room doesn’t work go down into the kitchen and get the keys. 12) Go back upstairs with the keys and go inside your room with the blue haired guy. Search around a bit for the kid until you hear a crash/shot and go outside to see the blood on the floor. Follow the trail to the balcony to discover the dead boy. At this point the game will repeat.

If you mess this up you can try the next playthrough instead of starting completely over, thankfully.

16) After the game repeats, leave your room and skip the scenes again. When the boy enters your home, make him sit on the sofa and get him cake again. This time when the bell rings, ignore it. You’ll have a new chat option to ask him to play after he eats. After he’s done, take him into the backyard where a series of dialogue and cut scenes will go off automatically.

17) After the cut scenes finish, go back into the house. The boy will be startled and will run up the stairs into your room. Follow him up the stairs and interact with the door a few times. When you can’t get in, go back to the kitchen. The keys are no longer there–go to the cabinet on the right of it and get the gun.

18) Once you’ve gotten the gun, go upstairs. Kang Tai will run out of the room and you’ll automatically shoot him. He’ll continue running down the hallway to the balcony–follow him. Once you get to the balcony the cut scene will initiate and you’ll get the achievement.

There will be a scene of someone standing in front of a set of numbers “851216”, this will be useful for the next achievement.

显现or循环 showing or cycle
显现出来的另一层 Another layer that shows up

After gaining access to the main character, leave her room and go to the space in between her mother’s bedroom door and the bathroom door. Interact with the wall and enter the password “851216” it should start over in a completely different context where the game seems broken since the mother is glitching and several timelines are running about at once. Do the same steps as you have done the playthrough before to get this achievement.

不再是秘密 It’s no longer a secret
一切都将呈现出来 Everything will begin to show up.

After getting the ‘Appearance or Reality’ and ‘Showing or Cycle’ achievement you should be able to get this automatically after entering the second playthrough, in contrast to the first game where you’d have to edit the saves in the game files.

After going through the 1st playthrough, you’ll have the option to give the boy up to the spirits at the trees. Tell him to ‘Give to it’ twice, you’ll end up getting this achievement.

！！！
发现了潜藏在后面的秘密 Discovered the secret behind it.

逃脱失败 Failure to escape
原本已经逃出来了，但很不幸的是你遇见了它 I thought I had escaped, but unfortunately you met it.

After you enter the mirror, you’ll be put in a position to run away from the blonde girl through a series of obstacles. You can run into the lines of spirits but don’t touch the ones coming towards you with the red eyes as it’ll kill you and force you to start the chase sequence over. Make it through the door at the end. Once you get through the doorway, go left and interact with the spirit, a cut scene will initiate and you’ll end off with getting this achievement.

清醒 regain consciousness
我在哪，这里究竟发生了什么……为什么我的身体！！ Where am I, what happened here? Why is my body…!!

Go and talk to the crow to get sent back. Go through with whatever the blonde girl wants you to do.
– Draw with her by interacting with the paper on the floor. Go through each of the pages by ‘drawing’ on them and pressing ‘z’ while hovering over the far right side of text. Go through all the pages to finish.
– Go with her to the backyard and interact with her on the swing. She’ll talk to you about a bunch of things. After, you guys will go into the kitchen. Interact with the seat next to her and sit. Go through the dialogue scenes, then follow her to the backyard to play hide-and-seek.
– She’ll hide 4 times in consistent locations:

-After that she’ll say she’s tired and wants to go to bed. When you get into your room, enter the bed and go to sleep.

After that a series of cut scenes will be triggered showing the murderer. After the car crash, be sure to let the scene of his hand stay up because his finger will twitch after a while and you’ll get the achievement.

这是我的日常 This is what I often do every day.
每天妈妈出门我就从这里悄悄跑出去 Every day when my mother goes out, I turn quietly from here to outside.

When in the dark empty place, go over to the chair and when it asks if you missed the content of the chair, choose to go back. When you get sent back and leave your room, DO NOT SKIP the scenes. When you walk out, go immediately to the backyard and the chair will be on the left. Use your action control ‘z’/’enter’ to push the chair to the right side of the yard and against the fence where there is a crack/hole in the fence. After that, interact with the chair and choose to climb up and over the fence to get the achievement.